Below Zero: Would You Like to Eat a Snowman

I’m never sure how to approach Laurel and Hardy. It terms of being icons of early Hollywood, they probably rank behind Chaplin in how easy they can be recognized not just in America but internationally. Here in Japan, there’s a chain of stores that uses their likenesses to sell tires. Twitter tributes to the duo are plenty, and the duo remain celebrated and honored the world over.

In “Below Zero”, they’re a pair of musicians desperate to earn some dough in the winter of ’29, and get involved in a series of mishaps thereof. It’s easy to feel sorry for Laurel and Hardy since it doesn’t seem that they can help how annoying they are, which inevitably sets off each other’s own worst tendencies. Both contain a deep, unyielding set of frustration with the world around them, though the corpulent Hardy will retreat to anger and frustration while Laurel epitomizes impotence in the face of crisis. 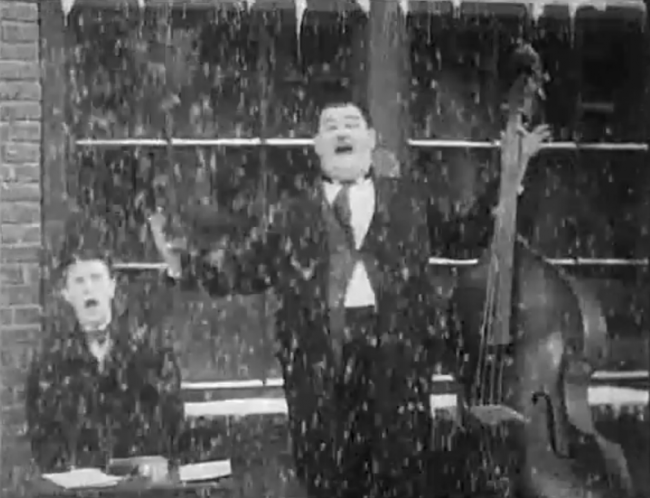 I’ve seen worse harpsichord/bass players, but can’t name any off the top of my head.

They’re a good match, obviously, and the ‘slow burn’ humor they’re known for is on full display here, as indignity and frustration build up like so many snow flakes upon the ground. (Pretty good writing I’m doing, right?) The slow burn also helps cover up any audio or pacing issues common for 1930 films, as they essentially become part of the joke.

The short ends with Laurel, having drank an entire barrel of cold water, whispering something to Hardy and then both scurrying off-screen. I assume he’s saying he has to pee. I just mention it because it made me laugh a little harder than most of the other jokes, save maybe for the bit where Laurel tries to peel an olive.

What I’m trying to say is I’ve run out of things to say. But watch this one, it’s fun.

I get the impression that you’re not much of a Laurel & Hardy fan (in which case, I’m your polar opposite), but you need a nice write-up on the movie.

I’ll do more Laurel and Hardy eventually. I don’t mind them, but they don’t command my interest like a lot of other comedians do.