“Dreams are swell. I couldn’t get along without them.”

With a title like Symphony of Six Million, you can enter a movie with certain expectations, including the fact that it’s probably dour, ponderous, and filled with music. And, yes, this is exactly all those things. Good job judging a book without even having seen its cover.

Ricardo Cortez plays Felix, a preternaturally gifted surgeon who has been obsessed with being a doctor since he was a child. Partially spurred on by his love of Jessica (Dunne), who grew up with a painful spinal deformity, and a desire to give back to New York’s Jewish ghetto, he dedicates himself to a free clinic and brings joy and relief to his community. 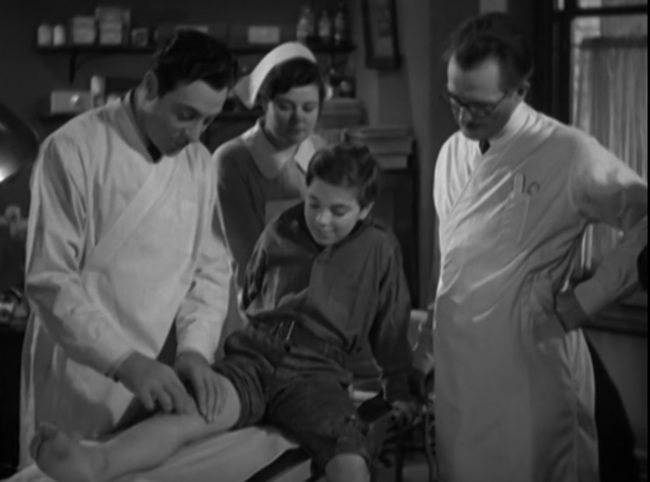 Unfortunately, his family feels different. Especially his brother, Magnus (Madison), who pushes at every point of friction he can find in his family to force his brother to take his skills to Park Avenue and get his family entrenched into the higher echelons of society. He finally finds a willing ear in their mother (Anna Appel), promising her a relief from years of labor and improved love matches for sister Birdie (Lita Chevret).

Felix moves up in the world, forgetting his clinic and Jennifer as more dizzy rich women beg for cosmetic surgery from the handsome doctor and he loses himself in his own myth. It’s hard for him to shake, even after one of his empty promises leaves a child dead, all until his doting father (Gregory Ratoff) asks him to operate on his brain tumor. 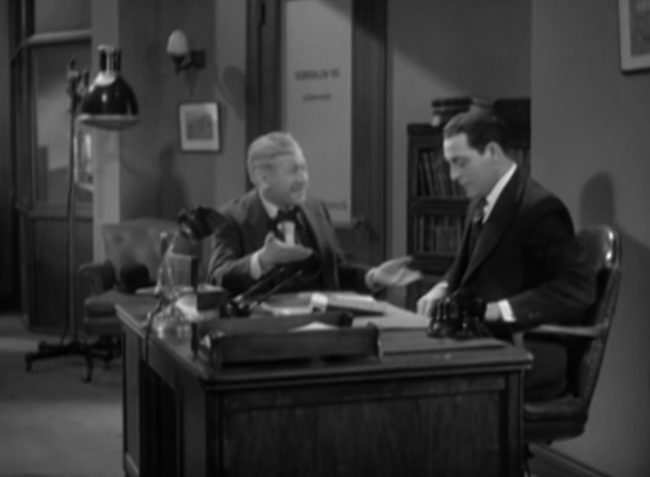 The film actively plays with the idea of medicine as a business or as a right. The older, less able doctors are the ones who volunteer and help, while the young capable ones spend their time climbing up the social ladder, one full of cosmetic surgery and old women who simply want to pay a fee to see a handsome face dote on their body. Felix transgresses this line, much to his family’s nauseated frustration.

Symphony of Six Million doesn’t do a lot with this besides let it tug at Felix’s strings. It’s much more a family drama, including an extensive prologue with the Klauber in its younger days. Father gets gas, Magnus wants to play baseball, Felix is studious to a fault. 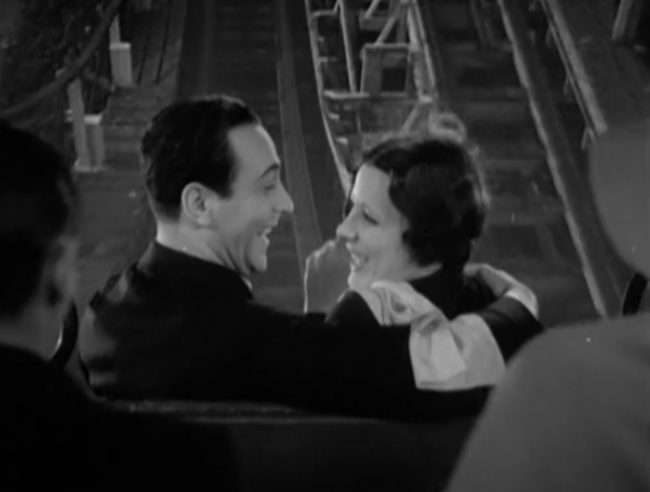 After years of watching pre-Code cinema, it almost physically pains me to start one of these movies that lasts more than 70 minutes. Not a knock against them, it’s just there’s a certain efficiency in story telling that characterizes this era of film, so when run times are extended, they stretch. out.

Ricardo Cortez is fine in the central part, but limited by the conflict which is one of neglect than any actual malice. This gives him an almost passive role in the spectacle. The conflict only comes to life when it’s time for him to operate on his enthusiastic father, a surgery that could go very wrong and have serious repercussions. This emotional moment works, bolstered by the excellent acting of Ratoff, but it comes over an hour into the film, where too many cliches have already floated through the pallid narrative. 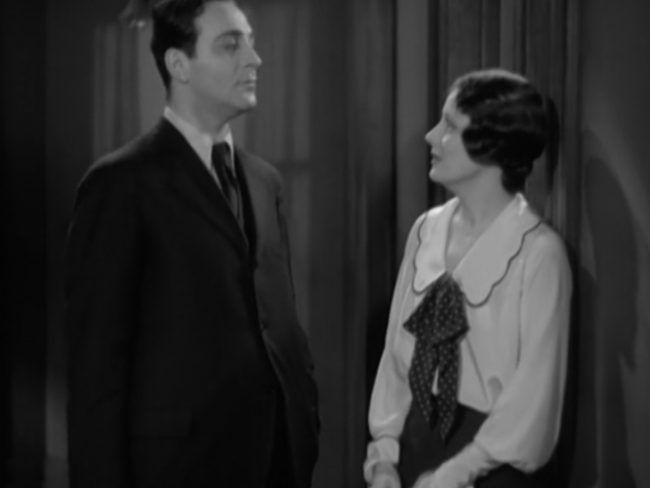 Irene Dunne is fine in her rather small role as Felix’s conscience, and Anna Appel also plays the conflicted mother with some notes of grace.

The film is scored intensely by Max Steiner, a rarity of the time as most early talkies avoided the practice for fear audiences would find it distracting. This was changing by 1933, but Symphony still feels like the concept is gaining its feet; almost every non-talking moment is underlined and wrapped in music, which does indeed call attention to itself. Steiner’s score also lacks much distinction, adding to the monotonousness. 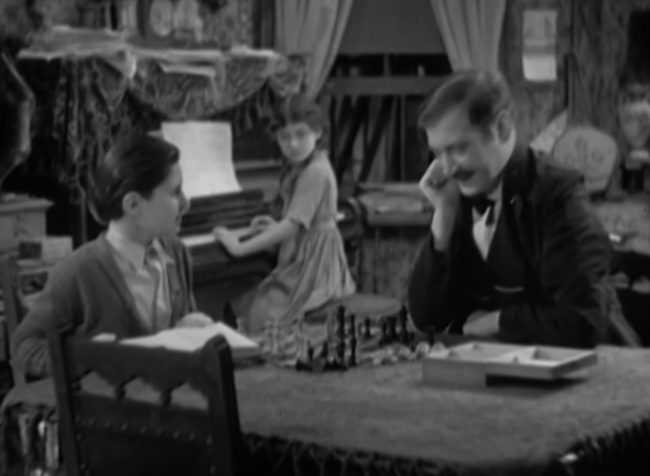 While the film is a lot of pap, there is a real effort being made here to present the life of Jewish people with sympathy and humanity. The Klaub family, while grating, are all working towards understandable means. As someone not of the Jewish faith (or any at all) it was interesting to observe these nuances, and it made me want to read up on American antisemitism of the early 30s, though I’m not sure where to start outside of a Lindbergh biography. There are a number of rarely seen glimpses, even other Jewish-centric pre-Code films like Heart of New York haven’t revealed.

But for anyone who’s not a cultural anthropologist or needs a movie to move faster than a snail’s pace, Symphony of Six Million is pretty meager entertainment. As much as any of these films are cultural artifacts, this one is especially so.

With anti-Semitism embedded and generally accepted in many aspects of American society, the Jewish Selznick may have felt “a conscious resolve to depict Jews as more than stereotyped comics, to present Jewish traditions and attitudes sympathetically, something that had been done only infrequently in Hollywood.” (Ronald Haver, David O. Selznick’s Hollywood) Selznick ordered the insertion of scenes of the doctor’s childhood, and of warm, realistic moments of Jewish immigrant life, many of which were actually already present in the Fannie Hurst story itself but which had not previously found their way into the script. Selznick charged young RKO producer Pandro Berman with making these changes, and furthermore changed the film’s title to one he deemed “more dramatic and dignified.” (Haver) […]

Symphony of Six Million was a box-office success. According to author Ron Haver, Pandro Berman later called it his “first good movie” and Selznick, too, was always particularly proud of it. It would remain one of Selznick’s most personal films.

Sentiment that arouses no little sympathy, owing to the sincerity of the players, courses through the scenes of “Symphony of Six Million,” Gregory La Cava’s film version of Fannie Hurst’s special screen story about a clever Jewish surgeon. This production was offered last night at the Gaiety before a thoroughly appreciative gathering, every person in which was held to silence by the simple but effective unfurling of the narrative.

Symphony of Six Million was based on, as Mordaunt Hall of the New York Times put it, a “special screen story” written by Fannie Hurst, author of the oft filmed Humoresque and the later Imitation of Life. The copyright information for Symphony of Six Million notes that the Fannie Hurst story was written as an original for the screen and only later novelized by one John Adams, a pseudonym too generic to be tracked very far. Directed by Gregory La Cava the film was one of the first movies produced by David O. Selznick during his tenure at RKO Radio Pictures. Selznick was Executive Producer; the aforementioned Pandro Berman was Associate Producer.

The music, by the great Max Steiner, stands out, but perhaps too much. Period articles drew special attention to Steiner’s score, often in brief sidebar articles accompanying the standard reviews for Symphony of Six Million, pointing out that it was the “longest sustained symphony ever composed” (Moberly), playing throughout nearly every moment of the film by a sixty piece orchestra. And it is a fantastic soundtrack, but perhaps too fantastic for the film, which I don’t think played as big as RKO had expected. Despite the big title, despite the huge soundtrack, it is basically a Ricardo Cortez film, and while the subject matter is bigger than usual for the actor it, as well as his performance, is just a step above middling.

3 Replies to “Symphony of Six Million (1932) Review, with Ricardo Cortez and Irene Dunne”