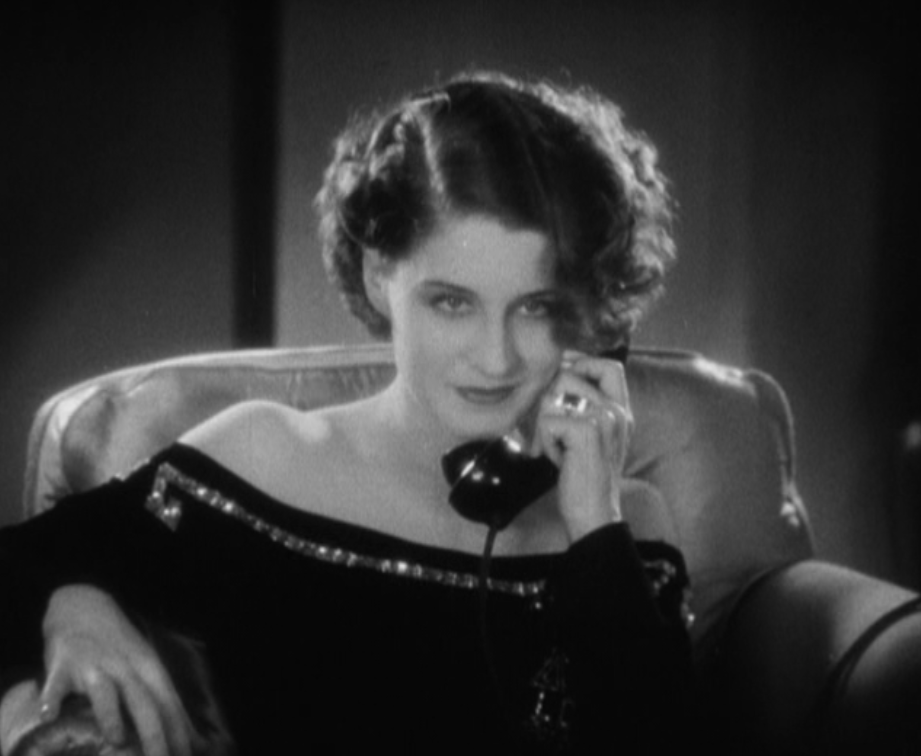 Strangers May Kiss: And So Much More

“We don’t believe in the old necessity of marriage.”

There’s something not mentioned or talked about often on this site, and that’s studio production stills. Often taken by a photographer on set, these glamorous shots capture the moments during rehearsals that showcase the film’s content (and, in this era, the film’s glamorous outfits).

Much of Strangers May Kiss feel like production stills. Stylish and beautiful, with a distinct lack of focus on just about every other aspect that makes a movie work.

Norma Shearer, still riding high after The Divorcee and A Free Soul showcased her as a sexy, free woman now plays Lisbeth, a sexy, free woman who is apparently the most glamorous executive secretary in the world. She’s fallen for bon vivant journalist Alan (Neil Hamilton), and the two have agreed to fool around before marriage much to the shock of conventional social norms. The person this impacts the most is her fiance, Steve (Robert Montgomery), who is a pleasant drunk and quite in love with her, but okay to let her float away so long as she’s happy.

Complications ensue. Lisbeth’s Aunt Celia (Irene Rich) is a big advocate for marriage, until she discovers her husband cheating on her and commits suicide. Alan is so shaken, he’s afraid that Lisbeth may fall for him in the same way and leaves her for a month– no message, no reason left, no nothing. Lisbeth’s mildly annoyed at this, but gives in after he explains that he was just afraid of her womanly feelings and rushes off with him to Mexico for a sojourn. This means that, yes, we’re treated to Norma Shearer in a sombrero.

Alan rushes off again, however, and because he does not take Lisbeth with him this time, she decides to go to Europe and live it up. And by live it up, we mean ‘have sex with every well-dressed man in sight.’ This goes on for two years until Steve tracks her down, hoping to again marry her or at least hang out since they’re so much fun together. But he arrives the same day as Alan sends Lisbeth a telegram, saying that he’s divorced his wife and has flown to Paris to meet her. She’s thrilled, but upon arrival, Alan learns of her sexual past and ditches her. She’s heartbroken, but manages to find blame in herself for what has happened. They eventually make up when she admits everything that’s happened is her fault and apologizes for it.

Strangers May Kiss may be one of the most frank films of its time, with its thinly veiled euphemisms (the other men Lisbeth were with sexually are ‘shadows on the wall’) being met with quite clear indications of Lisbeth’s exact feelings on her Lisbeth Does Lisbon-esque adventures. The audience is invited to once again revel in Norma Shearer’s seductive life as a one-night-stand-machine and as her gowns evolve into spectacular displays of cleavage and curves. But, while the movie certainly invites vicarious thrill rides down Mt. Shearer, the film’s very careful to eschew closer to traditional values by the time the third act rolls in. You can certainly have as much sex as your beaten up box spring could take, but it’s not consequence free.

The movie illustrates this by making Alan a petulant lover whose double standards amount to whiplash as he alternates between what he demands Lisbeth do while ignoring his own purple days and distant wife. Lisbeth is constantly put in bad (and looney) positions throughout the movie, as she must acquiesce to Alan’s bizarre turnabout nature and reveal (and re-reveal) herself to him in increasingly desperate maneuvers. She constantly has to rationalize his poor temperament and blame herself for them. In doing so, sounds like she’s not in love but suffering from acute Stockholm Syndrome. The first act ends with Lisbeth yelling at her deadbeat uncle, “Women aren’t human things to you. They’re either wives or sweethearts!” somehow leads to the third act where Lisbeth intones dreamily “[A woman’s virginity] gives marriage something grand.”

The Divorcee felt like a roaring, angry rallying cry against the double standard. Strangers May Kiss feels like a feeble presentation given at a community college ‘Intro to Public Speaking’ course.

It’s also hard not to draw a comparison between the film and Illicit and Ex-Lady which also both dealt with the problems of sex before marriage, and were similarly frustrating. Women’s pictures of the early 1930s were designed to show women leading glamorous lives of sexual freedom and then made humble by the end of the third act to keep religious groups happy and to reward the audience for their own life choices. This formula can work, but it’s difficult in all three of this pictures because there’s so much contrivance to undo the couplings. While those other films at least function in human terms, there’s just too much bending in Strangers. Lisbeth loses all her humanity by the third or fourth time she’s placing Alan’s petulant demands above her own.

The biggest flaw in Strangers May Kiss can be summed up in one name: Robert Montgomery. Before a contingent of classic movie bloggers with pitchforks rush in, let me say that he’s simply too good for this movie, and his charm and wit create a very clear delineation between the parts of the movie with life and those without it.

Shearer is at her best next to Montgomery, and seems to come alive as they banter back and forth. No such luck with her interactions with Hamilton, which always seem a moment or two off. There’s no chemistry, which only befuddles the romance angle more. That being said, this is the best I’ve seen Hamilton, though he still has that woodenness that would serve him so well later in his career.

Besides the schizo script, a lot of blame has to be laid at the feet of director George Fitzmaurice. Transitions are rough between scenes, as locations and years jump jarringly. The look of the film is great, but it’s stagy to a fault, and, for a prodigious film from MGM, feels decidedly underwhelming. For the sheer shock of hearing Norma Shearer profess her love of orgies, Strangers May Kiss may be worth a watch. But to see some of the most painfully obvious attempts to splice the free love picture onto then-conventional morality, it still leaves Strangers May Kiss a hackneyed curiosity above all else.

What’s my problem with all this, you might ask? My problem is that Alan is a little bit of a jackass and Lisbeth, as she’s described by one of her best pals, is “a little bit dumb.” And in both cases, a “little bit” is putting it mildly. […]

It’s really jaw-droppingly awesome, though. If you haven’t seen it, make it your business to check it out. Just be sure you don’t have any blunt objects around, or you might feel compelled to chuck them in the general direction of your TV screen.

STRANGERS MAY KISS is a very interesting and entertaining — but confounding — pre-Code movie. It’s hard to understand Lisbeth being willing to waste her life mooning after Alan, a love ’em and leave ’em jerk with mind-boggling double standards. Steve, on the other hand, while overly fond of the bottle, is dedicated to Lisbeth’s happiness. If Lisbeth can’t find love with Steve, one wonders why a beautiful woman like Lisbeth is so willing to settle for Alan, out of all the other men in the world. But, of course, there would have been no movie without Lisbeth’s perplexing love for that heel Alan.

Neil Hamilton began his career as the Arrow (Shirt) Collar Man in print ads for the shirts; by the time of his death in 1984 he had appeared in 268 silent and sound films.

Robert Montgomery was widely considered to be one of the best dressed men in Hollywood  and for years didn’t carry a wallet because it ruined the drape of his suit.  In many of his 1930s roles, Montgomery is seen exclusively in suits and tuxedos.

Unlike the character whom she portrayed, Shearer was anything but carefree during the production of Strangers May Kiss. As the wife of MGM’s head of production, Irving Thalberg, and one of the studio’s most prestigious stars, she had to maintain a certain propriety on the set, even as she unleashed her passions on camera. Neil Hamilton recalled, “Her love scenes positively sizzled, and she would get so passionate with me — before the camera’s eye, of course — that I used to wonder if she was getting enough at home. But she always walked off by herself after the scene, never hung around me, never made even the hint of a pass.”

Being married to the boss seemed to make Shearer fair game for inappropriate speculation. The idea seemed to be that a woman as vivacious as Shearer couldn’t possibly be satisfied with a man as ordinary as Thalberg. Biographer Gavin Lambert also builds the case of Shearer’s sexual frustration. “The strain of holding her sexual drive in check during Irving’s lifetime remained camouflaged until after his death…To get what she wanted and become Mrs. Thalberg, Norma had to disguise inner tension; three years later she was still disguising it, to conceal what she wasn’t getting.”

Others, however, have a more practical explanation for Shearer’s conflicted behavior on the set. She had just had a child and was extremely self-conscious about her postpartum appearance. Cinematographer William Daniels remembered, “She worried about her figure and her complexion and we dickered a lot about the lighting. I had to assure her several times that her figure was as svelte and shapely as it was before her pregnancy. ‘I don’t want the fans to see any difference,’ she said nervously, ‘I did my exercises, watched my diet, and I deserve to look good in this. I’ve earned the right!'”

11 Replies to “Strangers May Kiss (1931) Review, with Norma Shearer and Robert Montgomery”