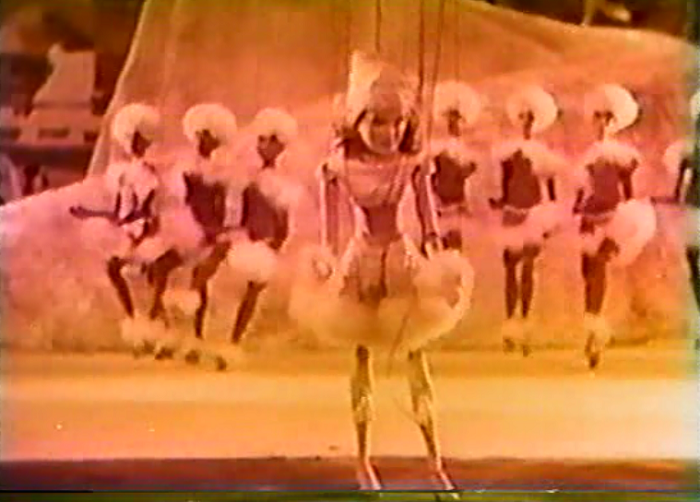 I Am Suzanne!: Sawdust and Blood

“Is everyone a puppet to you?”

Rowland V. Lee’s I Am Suzanne! is undeniably an odd and unique film. With long, elaborate sequences and songs built around marionettes and puppetry, it feels like a children’s movie, but possesses a deep psycho-sexual edge. Suzanne is, in fact, a fascinating attempt to explore individuality as well creative impulse– what are we, if not the end result of those who influence us? How do we break free– or can we?

Lillian Harvey, a German film star who had limited success in America despite a great deal of beauty and charm, stars as Suzanne, an orphan who wound up in the care of Baron Herring. He’s a wheeler and dealer who uses her prodigious acrobatic and singing talents to line his pockets. He keeps Suzanne in a sort of slavery where she is worked constantly and gets barely a fraction of the profits. This life of constant rehearsal means that she gets little time to think about how she’s being treated or about the many men that Herring is keeping from her.

This changes because of a surprisingly persistent puppeteer named Tony. He’s one of those kinds of characters that is both somehow the film’s romantic lead and yet also makes an extremely accurate marionette of himself that he then talks to for long periods of time. He’s also obsessed with making a similar puppet of Suzanne, something that she finds flattering… at first.

After an onstage accident cripples Suzanne, Herring dumps her quickly. Tony is eager to help her recover, especially once he finds that much of her recovery involves manipulating strings tied to her extremities.

As Suzanne grows closer to Tony, the more she realizes that his kindness and appreciation of him is nothing compared to his fetishistic devotion to the puppets of his life. When she’s well enough to hobble, he takes her back to his family’s theater– he’s the fifth generation of puppeteers– and is greeted by his dolls, including a puppet made to resemble his dead dog and a few made in the image of women that he’d obsessed over.

The dolls will never charge, never grow old, and always be right there for him. Then he goes to the completed Suzanne doll and pledges his eternal love to her. The real Suzanne is confused: is that how this works?

Well, no, darling. Suzanne, with her first taste of freedom and eager sense of lust, is frustrated and confused by Tony, who is at one point kissing her and at the next whispering to doll Suzanne, “Well, we have secrets she’ll never know!”

Suzanne and Tony make a successful debut of a new and modern puppet show that contains riffs on Charlie Chaplin, Greta Garbo, Maurice Chevalier, Will Rogers, and even all four Marx Brothers. But Tony still insists that his puppet Suzanne remains her pinnacle, and that look in his eyes is more than a little distressing. She finally loses it when he ignores her after the show’s enthusiastic reception so he can put all of the congratulations on her puppet doppelganger; in what can only be called a pique fit of pure rationality, she shoots the Suzanne puppet right in the heart.

Herring, upon learning that Suzanne has recovered, signs her to another contract and passive-aggressively guilts her into returning to his side. A show promoter books both Tony’s puppet show and Suzanne as a dancer together on a stage, and the two see it as a showdown: blood versus sawdust.

If the plot seems elaborate, it’s not. Imagine an episode of “Mr. Rogers’ Neighborhood” where a sheltered love interest shows up and tries to drag Mr. Rogers away from King Friday and the rest of the Neighborhood of Make Believe but without much success. Oh, and Mr. Rogers really has a thing for King Friday.

The puppetry in I Am Suzanne! is far more elaborate, though, as it’s performed by Podrecca’s Piccoli Marionettes and the Yale Puppeteers with an impressive array of scale and imagination. The film, which has been tinted pink and yellow (as far as I can tell from the ratty print I’ve found), is definitely in the vein of 42nd Street and other Busby Berkeley numbers. The elaborate dance choreography is sublime, with the final number being particularly spectacular.

Harvey’s first number is admittedly a little awkward, but that may be out of design. The song involves a desire to make love to a snowman. He comes to life and does a softshoe before melting into a puddle of water. Cleverly, this mimics Tony’s own role in Suzanne’s life– a romantic love out of thin air, but soon that perception melts completely.

In fact, I Am Suzanne! often doubles back and comments on itself. The film gets its title from the declaration “I am Suzanne!” said twice by Herring and once by Tony before Suzanne gains enough agency to say it for herself. Both men feel that they own her or control her before she realizes she must stand up for herself. But does Suzanne actually gain her freedom from these men and their control? Well, no. But more on that in a bit.

The movie climaxes in two musical numbers. The first is Suzanne dreaming of being put on trial for murdering the puppet Suzanne. Suitably nightmarish, it features not only a witch taunting her about having a puppet child, but her human friends turned into marionettes and trotted out too. All of them accuse Suzanne of being cold and inhuman to the doll Suzanne and sentence her to death by spider strangulation. It’s a fun sequence, very inventive and completely nuts. That the audience gets in on the action, too, is a quiet, damning indictment of how even a performer’s personal life is subject to an echo chamber of damning.

The film’s final number, the over-the-top stage show where Tony and Suzanne throw down, features a chubby, cackling actor playing Satan lording over a puppet kingdom of demons. Satan condemns ner-do-wells like mobsters, mother-in-laws, and cross dressing women to the fiery pit, but allows a dancer claiming to be an angel her turn to dance for his amusement. (Satan’s man-breasts jiggle readily as he laughs with glee.)

There’s a clear equivalency between the devil and Tony; someone who feels that they pull the strings, that they command all. The final number takes on an air of freeing symbolism from his perverted desire. Suzanne is an angel accidentally cast from heaven, and transforms from a puppet to her real self to dance to her salvation. As she does so, the other puppets of hell also become human. When she is finally cast into the fiery pit, she emerges in heaven. Notably there is no God there, and, importantly, no puppets. Suzanne’s gifts and talents allow her to beat the devil and emerge in a happier, more perfect place.

But the ending isn’t all sunshine and rainbows. While Suzanne transforms and learns not to rely on people, her former puppeteers are still lurking in her life. And Tony, though he apologizes, hasn’t gone through a transformation like Suzanne has. Her neutering of the Baron isn’t a great victory, either, as he continues to rip her off. The Baron, who’d tricked her into an engagement and uses a dance instructor named Mama (Georgia Caine) to help manipulate Suzanne, is a clear father figure, perverted into that of a lover by his own malicious ends. Suzanne’s victory slots him back into being just a father by film’s end, but he’s still preying upon her with little love and less respect. While she may have cut her strings, Suzanne must be vigilant to retain her freedom.

Weirdly, for something that sounds so innocuous, I Am Suzanne! contains a number of horror elements that would work their way through the genre for decades to come. Tony’s obsession with puppets– that need to control and the deep sexualization that’s tied in– would also be referenced in movies like Attack of the Puppet People (1954) and the long-running Puppet Master series. Some of the little tribal dolls on display here that chase after Suzanne also clearly inspired a segment in the cult horror movie Trilogy of Terror (1975).

But the most notable influence it may have is on the idea of ‘body horror’. Body horror– the idea that your body is a weird foreign object that can turn against you due to disease or mutilation– had already been shown in a number of male-led horror movies, notably the two adaptations of Dr. Jekyll and Mr. Hyde (1929 and 32) and, in a naturally weird tangent, Freaks (1932). Suzanne differs by featuring a woman protagonist. Here, she’s beset by the terror that her coupling with Tony will result in a child– a puppet child. The marionettes who put her on trial taunt her over this, and she screams in horror.

That idea of giving birth as something horrific, something that could be tainted, couldn’t really be pursued during the Production Code or even after simply because it often seemed so gruesome. The genre would eventually find home in science fiction films like Alien and Videodrome, but those are cold, blatant films. Suzanne‘s most obvious (and least likely successor) would have to be Cronenberg’s remake of The Fly (1986), though, again, the fact that it isn’t dressed up in a world of playful puppets and silly villains almost makes Suzanne more horrifying rather than less.

Lillian Harvey is a great beauty, perfectly portraying a talented but naive girl who yearns to become a functionally lustful woman. Leslie Banks almost steals the show as the confident, conniving Herring who clearly abuses his power whenever he gets it. And Gene Raymond, usually too nice to be a bad guy and too bland to be a good one, finds the perfect tone here as a man who you would most certainly believe would want to have sex with a puppet.

There’s probably enough subtext in I Am Suzanne! to get a good book out of, but that doesn’t make the film any less fun on a visceral level. It’s a movie about so many things, from fear of abandonment to the exultation of perfection, that is perfectly matched by some wonderful visual metaphors and a wholly unique, deeply psychological coming of age story. If you can find a good copy of this one, watch it.

What makes the movie so deliciously oddball, apart from little touches like an anthropomorphic dancing snowman, is the way I Am Suzanne! melds childish glee and way-out-there perversion. Watch Harvey’s expression when she’s in the hospital with Raymond adjusting her traction, and maybe you’ll see what the Siren means.

This being Hollywood, screenwriters Edwin Justus Mayer and Rowland V. Lee unconvincingly bring the two together anyway, embracing in a cold clinch that foretells doom for the couple. The Suzanne doll will never age and never complain, and it’s only a matter of time before [Tony] prefers the reliability of wood to the mysteries of the flesh. The real Suzanne will surely have more nightmares to come, and begin to wish she had a bigger gun.