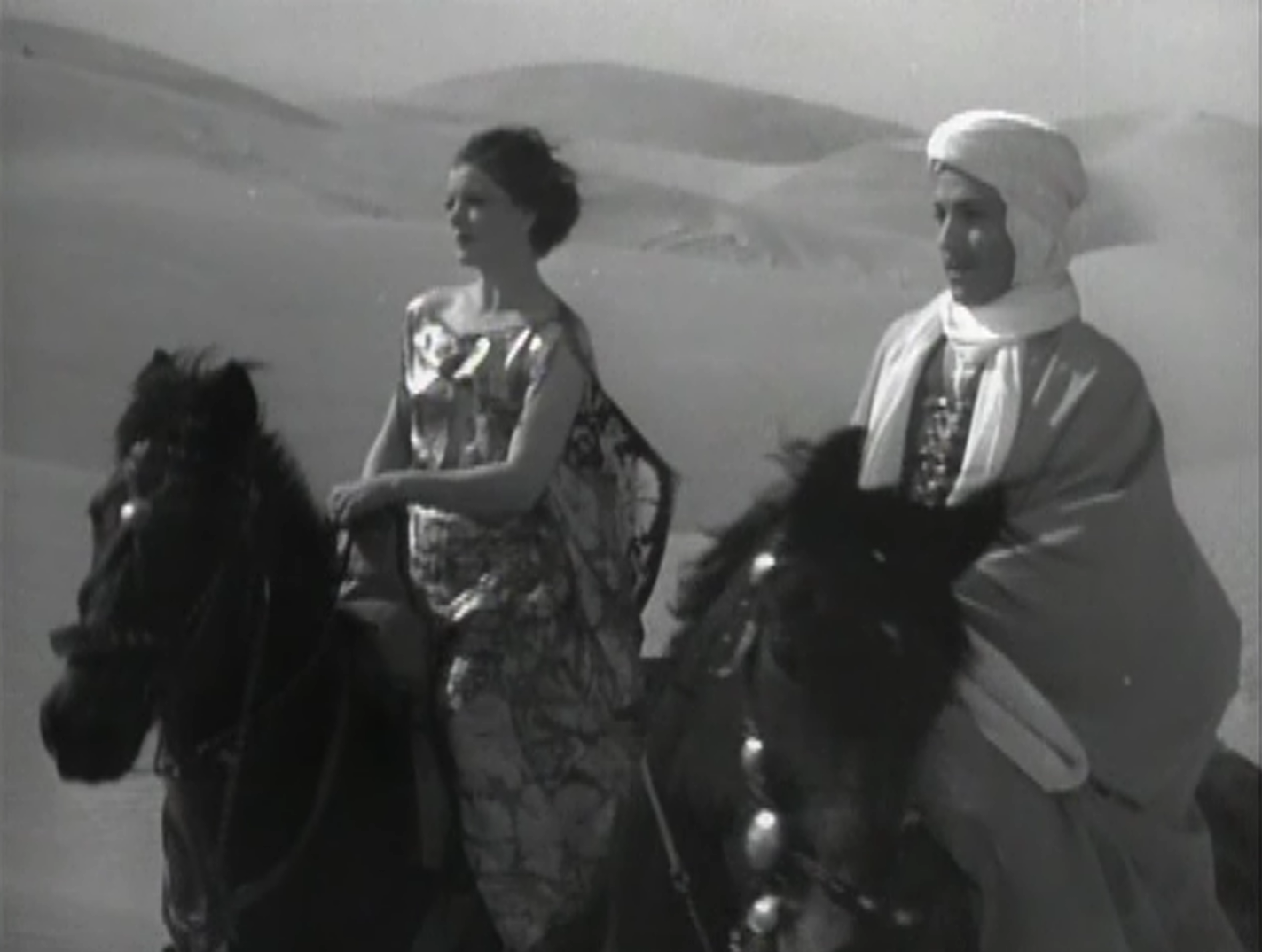 The Barbarian: A Chic Sheik

“If you were of my race, you’d understand. My race honors the great achievements of your race. The building of canals, of aqueducts. But we do not put such things above the art of love. We call those men slaves who do the world’s work. But we dedicate our lives to the ecstasy of living. Might I dare hope that mademoiselle’s chosen mate will be cognizant of all the delicate potentialities of her sensitive being? That he will indulge mademoiselle’s incomparable womanhood with the infinite ecstasy of little things? The strange and varied effects of all the perfumes. The sensation of warm breath breathed gently on the moistened skin. The keen refinements of touch…”

There’s something in The Barbarian to upset practically every modern sensibility, and probably quite a few old ones, too. In 1933 it was a throwback deliberately engineered to do two things: reignite the stardom of former Valentino heir apparent Ramon Novarro, and to see if there was any money left in the old ‘kidnap, rape, and love in Arabia’ plotline that had kept women in the early 20s all atwitter in the aisles.

The results of the experiment is in the negative, though watching the film wind its loopy way through gender and racial politics of the early 30s in the most regressive ways possible is a singular treat. I hesitate to say ‘so bad it’s good’, especially since it’s so morally offensive on a great deal of levels, but there’s a tenderness and care in the characters that counteracts a script that can’t make up its mind as to where it’s going or why. It’s a movie that theorizes that being beaten, whipped and raped isn’t a face worse than death– being married to a British man is.

Before I get too much further, let’s go over the plot. Jamil (Novarro) is a guide/conman in Egypt, seducing young English visitors away from their husbands and exchanging jewelry as a keepsake– though his is worth significantly less than what he’s getting. This changes at the train station one day as he sees Di Standing (Loy), visiting Egypt to get married to blithering engineer Gerald (Denny) along with a few stuffy British escorts, Cecil (Smith) and Powers (Hale). Gerald tosses off lines like, “Well, I realize that there are such things as romance and poetry and all that sort of rot” so you know he’s a real charmer.

Jamil decides to worm his way into Di’s cadre, and he soon breaking up her dates, serenading her, spying on her as she dresses, and just in general being a sex-starved brat. Di oscillates between amusement, displeasure, horror, and good ol’ fashioned swooning, so Jamil thinks he’s in after he kisses her in her bedroom after delivering that speech up at the top of this review.

(Side note: Did you read that thing? Do you think scriptwriters Anita Loos and Elmer Harris were cackling when they formed phrases like “mademoiselle’s chosen mate will be cognizant of all the delicate potentialities of her sensitive being”, or did you think they believed that if a glowering sexy sheik had to talk, he may as well sound like an 18th century poet on goofballs?)

Seeing as how his unwieldy words don’t have the desired effect, Jamil decides to sneak along on her desert trip to meet up with Gerald and try his hand at seducing Di again. This time this results in her whipping him, leaving a mark across his cheek. To punish her, he guides her away from the caravan to the desert palace of the lecherous Achmed Pascha (Arnold). Here she is bathed, dropped in a neglige, and nearly raped before Jamil’s conscious gets the better of him and he helps her escape. Stranded in the desert, he decides to have his own way with her instead, forcing her into submission and then taking her to his tribe where she will be his bride. She spits in his face during the ‘I do’ portions of the wedding ceremony (well-timed, I’d say) and heads back to the city with the entirety of civilized Egypt now after Jamil for having defiled a white woman.

(Well, half a white woman. I should note that the movie makes it explicitly clear that Loy had an Egyptian mother, which everyone gossips about as if she had a third nipple or something– slightly scandalous, and really only there to give the screenwriters some leeway.)

A lavish MGM production, the film will definitely not win any points from modern viewers judging the film on gender or race. The Egyptians are all love hungry sex fiends and, of course, not portrayed by Arabics. They’re brutal and nasty, and while the movie obviously wants to show you that they’re the type of he-man cock monsters that modern civilized guys are too fey to measure up against, this peon to sexual brutality is distinctly un-PC all the way around. Women here are temperamental playthings, though Loy certainly gives as well as she gets for the entire running time.

I noted back in my review of The Cat and the Fiddle that Novarro sometimes reminds me of “a tragic Pepe Le Pew”, and I’d say so again here, though a bit more pronounced. The first half of the movie, where he’s the happy-go-lucky troublemaker who would feel at home in a slapstick comedy film is appropriately playful, but the twists of the plot to make him not only romantic but the titular ‘barbarian’ prove a hard balancing act for the actor to endure.

Loy, on the other hand, really shines in her role, ping ponging through emotions and clearly trying to overcome her own racist attitudes to little avail. Why her character makes the choice she does at the end is pretty baffling for anyone outside the screenwriters and the audiences who demand that kind of ending, but otherwise she’s a treat to watch here. It’s especially fun to compare her prudish, frustrated Di here with her role of Fah Lo See from The Mask of Fu Manchu from the previous year as both certainly have a way with a whip that’s a little off center. Though in this movie she’s the white woman trying to put a scheming, sex-starved foreigner in his place, and in the latter she’s a scheming, sex-starved foreigner trying to put a white man in his place. Nora Charles couldn’t come fast enough.

The Barbarian‘s closest pre-Code spiritual cousin is Frank Capra’s The Bitter Tea of General Yen, though it’s certainly in the Goofus and Gallant way. Whereas Bitter Tea is learning about other cultures and recognizing your own biases, The Barbarian is implicitly more about the giddy pleasure of traipsing across those lines for sex and adventure. Some people will find these regressive stereotypes titillating– they definitely still flourish in romantic fiction today– but if anything in this review has appalled you, steer clear.

The Barbarian is trashy piece of pulp, an attempt to recapture an outmoded style for the screen done up in MGM sets and with actors churning out improbable dialogue. It’s a fascinating relic that never seems to have any idea what it’s doing besides attempting to get something going in the mostly-female audience’s nether regions. I don’t think it succeeds (especially to a modern audience who will cringe at Di’s inability to see a wolf in the fold nor find the off-screen rape as titillating as MGM hoped), but the film is such a time capsule of such a different mode of thinking that it’s thrilling roller coaster of bad taste.

Oh, and again Myrna Loy in this movie. Damn.

Less dramatic but shocking enough to cause the censors to get involved was Loy’s supposed “nude” swimming scene. Existing stills do make it seem as though Loy was naked under the water, but she admitted in her autobiography that she was actually wearing a flesh colored bodysuit. Nevertheless, the censors demanded that “all shots in which the girl’s body is visible through the water” be cut. While The Barbarian made a $100,000 profit for the studio, it was considered racy enough to be banned from rerelease after the 1934 adoption of the film censorship rules known as The Production Code.

It’s one of those films that could only have been made in the pre-code era at MGM, the studio who had the hardest time being truly subversive and often wound up just kinky and deeply racist instead. […] Clearly MGM is pointing towards two 1932 hits for its box office hopes —Universal’s THE MUMMY and Columbia’s BITTER TEA OF GENERAL YEN. But it’s still MGM and therefore falls woefully short of Paramount’s surreal charms or Universal’s lurid expressionism, even Columbia’s humanist handball, even if the pyramids are superbly evoked and the whole scene mad with magic.

If you imagine what it would be like if MUMMY star Zita Johan went off into the MOROCCO desert to endure SWEPT AWAY-style whipping and dominance head games at the hands of General Yen, well you’ll find the erotic Myrna Loy bathing scene to be approximately sexier than Claudette Colbert’s milk bath in SIGN OF THE CROSS, which if these things matter to you, is nowhere near as awesome as Maureen O’Sullivan’s nude swimming in TARZAN AND HIS MATE. Frankly I’m ashamed of myself for knowing all this, and so is Ramon Navarro, or will be, once he’s caught by Myrna’s coterie of harrumphing Enlganders.

Oh, good Lord, this movie.  I … just… WHAT WAS THAT?!  Allegedly, this was supposed to be a romance, but it seemed more like a horror film to me.  It was outright disturbing. There is absolutely nothing romantic or charming about Jamil’s pursuit of Diana; it’s nothing but stalking and dangerously manipulative behavior.  I certainly wasn’t rooting for Jamil and Diana to wind up together. The only union I wanted to see between these people was of her fist meeting his face.

10 Replies to “The Barbarian (1933) Review, with Ramon Novarro and Myrna Loy”