The Washington Masquerade: May Roosevelt Protect Us

Hey guys, here’s my controversial statement for today– politics are horrible. Ignoring the political parties that tangle over ideological opposites and the resulting gridlock, and you’ve still got a governmental system completely compromised by big business and huge chunks of money, let alone the revolving door from congressman to lobbyist that encourages graft and bribery.

If it makes you feel any better, it’s almost always been that way. (Actually, that makes me feel worse, but, eh, you know.) In the early 1930s, the political machines were still charging, and the stink of the scandals and deals of the late-20s were probably just as rank as you can imagine.

That’s probably why political fables have always been popular. As Martin Schneider put it so well a few months ago, in art, we can balance the tables. The little guy can win. 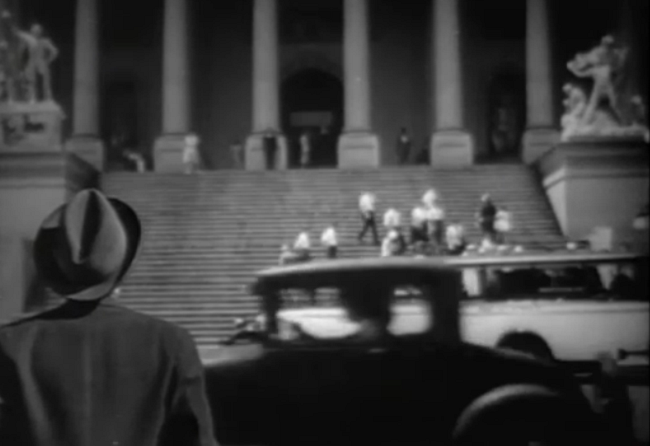 Mr. Keane Goes to Washington and Gets His Ass Kicked

Defense attorney Jeff Keane decides to run for senator after the incumbent demands he apologizes for violating “the order of things” when Keane insulted a crony judge. Keane soon gets an up-close and personal view of the Washington merry-go-round. Keane is clearly a New Deal populist, resisting calls for business leaders to take over farmland and producing long pronouncements on the Senate floor that leaves his party’s opposition fuming.

And while Keane may be a stand-up guy, there’s one thing that’s gonna get him in trouble– he’s a widower. When the pro-business competition gets scent of this, a big shot Washington wheeler and dealer/lobbyist/madame named Consuela Fairbanks comes courting. As a colleague and Keane note, “She’s quite a figure in Washington.” “Quite a figure anywhere!” She disarms him handily, and they’re soon married, much to the grief of Keane’s teenage daughter, Anna.

Barymore is the perfect man to play someone of conflicted scruples. I can only imagine someone watched his Oscar-winning performance in A Free Soul and immediately gave him a part with as many speeches to deliver as possible. He gets at least four or five here, and, I won’t lie, they’re corkers. If the movie works, it’s because his charisma gives him the ability to overcome the film’s pace and plotting. 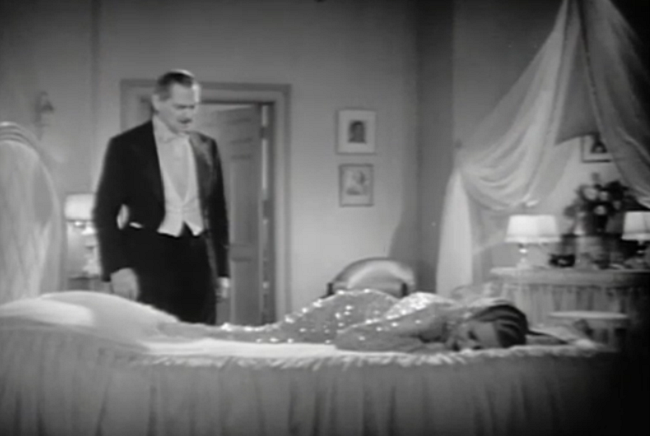 Don’t worry, Lionel, this was my wedding night too.

Washington Masquerade is a fairly sophisticated take on politics (you’re allowed to call a movie sophisticated if two characters sit around and drink tea for an extended period of time), even if it’s ending seems fairly contrived. The ending ties up a few loose ends (and again practically freely homages A Free Soul), but notably leaves the powerful and corrupt still in their places, ready to ripoff on the American people once more.

The movie is a great revelation in terms of what the public hoped for in the era of Roosevelt. The President himself even makes an appearance with the First Lady, though we only catch glimpses of them from the back. Their entrance to a reception contains a lingering shot of a line up of foreign dignitaries, each with a hopeful look in their eyes, mimicking how many in the country felt about the new administration in Washington. 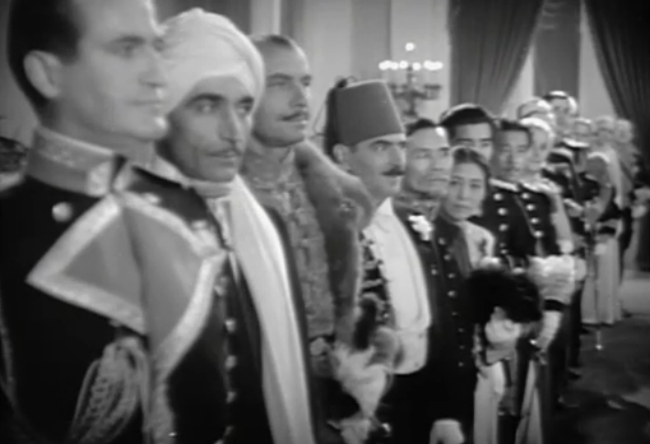 The eyes of the world are upon you! … And checking out Eleanor’s can.

But even with the widespread New Deal optimism, the film presents a feeling that politics are still politics and that good men are easily led astray by good intentions. Washington Masquerade offers no hope that America will be spared from politicians, but instead warns that good, honest men must forever remain vigilant. In politics, as in life, it’s still the follow-through that counts. 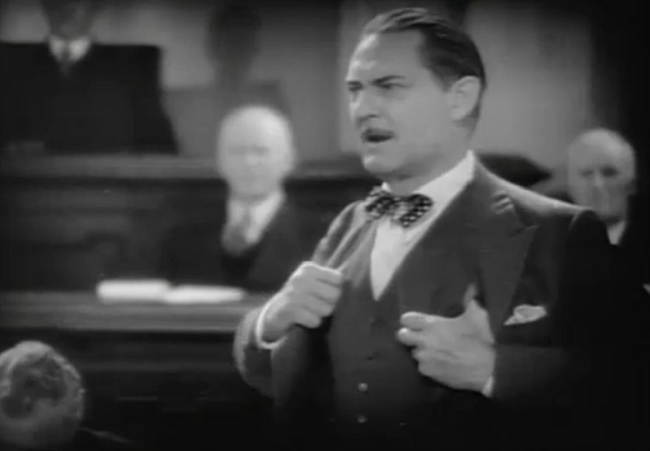 “Ladies and gentlemen, I do believe it’s time for me to talk again.”

Just saw this one recently myself and was a bit let down overall. It started off so well, and you’re right, Lionel was at his best delivering some super-long speeches with maximum effort, which for Lionel is a fine line that I did not think he crossed. Edge of your seat stuff for the first 15-20 minutes, I thought. When Karen Morley showed up I thought things were really going to get going, but somehow it all went off the rails for me about this time. I wound up really not caring about any of these people, except perhaps Diane Sinclair as Lionel’s daughter, who was at least bad enough to get under my skin!

Right? It sets itself up as a David and Goliath story, but I think they make Barrymore’s character just seems to go too far, too fast, especially for a junior statesmen. The rather blatant evilness of his enemies only makes it more goofy, too. I will admit there were moments where I think Morley’s character was almost torn between her husband and Asther, but the film would rather just make her a crazy whore and Barrymore the pariah than to make it a movie about their relationship and how politics can come between them. Just kind of a disappointing mess is all.