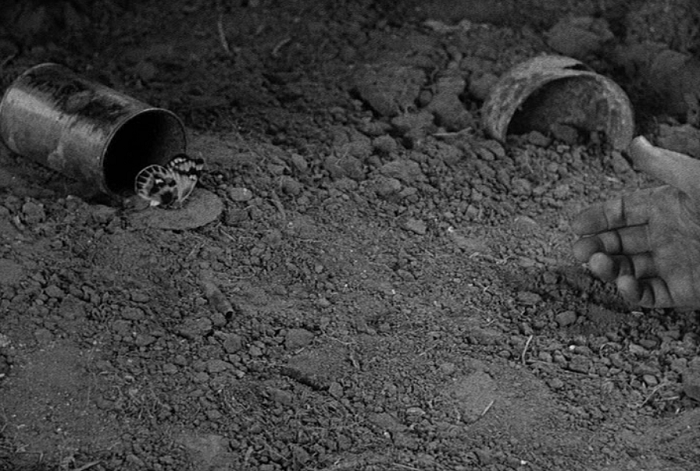 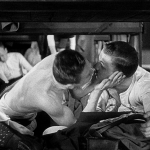 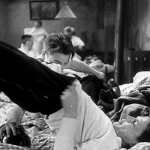 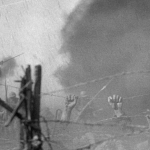 All Quiet on the Western Front: Destruction of Innocence

“We live in the trenches out there. We fight. We try not to be killed, but sometimes we are. That’s all.”

All Quiet on the Western Front remains one of the most famous Pre-Code films, a war epic Best Picture winner whose echoes reverberates through every war movie made afterward. So when I call the movie ‘iconic’, that still may be underselling it.

Based on a bestselling 1929 novel, All Quiet centers on the lives of a schoolroom of German boys who will soon understand the ugly truth of war. The deafening cries of the crowd as soldiers march off to the front almost drowns out the discussion in a classroom– what cleverly appears at first to be patriotic fervor drowning out all reason– only to find that the place of reason, too, has been turned into a pulpit for politics.

The bespectacled professor implores his young students to head to the front, for glory and honor. We watch as they daydream their way into parades and women’s hearts, and the excitement overtakes them as well. Most of these young men look vulnerable, but eager, and none embodies this moreso than Paul (Lew Ayres), a writer who can’t help but get caught up in the enormous excitement and equally enormous societal pressures.

We follow the cadets into basic training; they’re prepared for a lark, but find themselves lorded over by a commandant who was once their town’s postman. He has them crawl through mud for his own bemusement, and the cadets see him simply as an obstacle to the jolly business of war. They get their revenge, throwing a sack over his head and spanking him with sticks; a brief reminder that these are still very much kids.

Of course, World War I does not turn out to be a picnic. Arriving at the front, the boys are introduced to a wise commander who instructs them to get used to being hungry. He’s Kat, a blunt little man with a nasty laugh. He’ll do his best to guide these recruits to what the war really is: attrition and bloodshed.

We follow the soldiers as they’re trapped in a bunker for days under fire, as they gallantly run into No Man’s Land, and as they spend their final few moments in the hospital, wailing in agony. The film is episodic, slowly letting these bright young men who thought crawling in the mud was going to be the worst of their experience. The faceless class is picked off, person by person, lost to hunger, disease, or madness.

Paul survives, though it’s from grim perseverance and plain stupid luck. During one battle, he finds his old commandant has been thrown in to the fray as well. Paul pulls him aside to mock him, only to see the man perish a few seconds later. In the course of the pitched battle in a church graveyard, he gets trapped in a foxhole with a French soldier. He stabs the solider mercilessly, but, surrounded by both sides, he’s trapped in the pit with the dying man.

Being stuck in this situation shakes him to his foundation. Earlier he’d made fun of his commandant for being afraid of the fight, and this close call proves that his veneer of bravado remains fragile. He watches the French soldier die, slowly, and flips between bouts of anger and appeasement. After a long night, he escapes from the foxhole and breaks down in front of Kat, who tries his best to console him.

A few more incidents occur, including a liaison with a young French woman who seems to have been more interested in the bread Paul brought to the table than the sausage. After an injury, Paul’s sent back home for a brief recuperation, and discovers that the war is still held to a high standard of romanticism.

His father’s friends tell him to fight harder and stop losing, his sick mother tells him to find a less dangerous job, and, the biggest injury of all, he finds his old school professor, still rousing the schoolkids and telling them about the noble heroism of war. When the professor asks Paul to speak a few words about the experience, Paul can barely muster up anything but the cold truth. The professor and schoolboys tear into him, calling him a coward, and he fires back:

“Up at the front you’re alive or you’re dead and that’s all. You can’t fool anybody about that very long. And up there we know we’re lost and done for whether we’re dead or alive. Three years we’ve had of it, four years! And every day a year, and every night a century! And our bodies are earth, and our thoughts are clay, and we sleep and eat with death!”

Paul becomes so impassioned, he decides to end his leave early and head back to the battlefield. There he can at least feel at ease; the war has destroyed his ability to do anything but make war.

Making All Quiet into this movie, a movie from the German perspective, is a stroke of genius. It’s anti-war themes are underlined by the fact that you know from the start that these men are on the losing side of the conflict; still, though they’re foreign, director Milestone takes great pains to make them seem as American as possible so the audience can relate and understand that the sons of all countries are above all still real human sons.

There are no stiff accents here, and besides some references to the Fatherland and the pointy hats, the difference is hardly perceptible. This is all the better to make it a truly universal story. The danger in All Quiet would have been in making it a sly against Germany, which some still interpreted it as; more on that below.

Milestone’s work here is nothing less than phenomenal, and he does a brilliant job recreating Europe on a California back lot. Milestone is cagey enough of a director to be able to switch between an omnipresent camera to the first person perspective. This gives the audience a brief flash of visceral excitement followed immediately by the horrific consequences of such a rush. It’s masterful stuff, and subtle as well.

There’s other tricks I wanted to point out. Milestone has an early scene where the soldiers, trapped in a bunker under fire, find their bread is infested with rats. We watch Kat swing a shovel at the poor mindless and disgusting creatures who were simply seeking out food. Later we see Kat wield the same shovel on the enemy troops as they invade his foxhole, and the connection is clear.

I have plenty more, and I’ve added some screenshots with discussion down below the main review. Before we get to that, I did want to touch on the film’s ending.

Believe it or not, Paul doesn’t survive the war, perishing in its final moments in a moment of blissful nostalgia. Spotting a butterfly a few feet away in No Man’s Land, he emerges from the trench to reach for it.

The butterfly is a potent symbol in the movie. As a child, Paul collected and pinned butterflies, an attempt to tame nature and categorize it. Now, after the madness of war, Paul has experienced being the pinned butterfly, and figured it out: nature is beautiful because it is free.

Unfortunately for Paul, this unguarded moment coincides with a French sniper taking aim for one last bounty. I don’t think it’s a coincidence that the soldier who takes out Paul looks eerily like the one he stabbed earlier in the movie, demonstrating the circular and unending nature of war in one final, brutal gunshot.

The film’s final epilogue, of shadowy young soldiers marching away from the camera over a field of white crosses, is stunning. The soldiers turn and look back at the audience with sadness and bitterness; this is the same footage from earlier in the movie where the soldiers first make their way towards the battlefield, equating the loss of innocence and war with certain death. This serves as another condemnation, one brilliantly aimed directly at who is responsible for the war.

For while the Kaiser needs his glory, its his people who sing the songs and praises. While the generals are the ones who command the men in battle, it’s we, the audience who allow our sons to go off to war. Few films so nakedly condemn those who have spent the last 150 minutes watching it, and even fewer make it work so poetically.

The thing that really struck me was how influential the film was not just in its immediate release, but decades upon decades after its release. It’s easy to see parallels and homages throughout modern works like Saving Private Ryan, The Thin Red Line, Jarhead and The Hurt Locker, with the later functioning as almost a beat-by-beat remake in many instances. But every review I’ve read lists a different half dozen war films who have felt the echoes of All Quiet, and each list is completely unique.

There are a number of reviewers complain about the direction or the acting, and in most of those critiques it’s hard not to discount that as movie critics simply grasping at something to criticize; they have to remain relevant somehow. While Ayres is a bit stiff, his transformation throughout the film is nothing short of stunning, and anyone who criticizes this film’s direction is, frankly, nuts.

All Quiet on the Western Front remains a brilliant and timeless story about the foolish things countries do against their own good. Though this movie was made in 1930, the echoes of Vietnam, Iraq and Afganistan now come along with it. We will never be rid of war, but this movie is a vivid reminder of why we must always try. 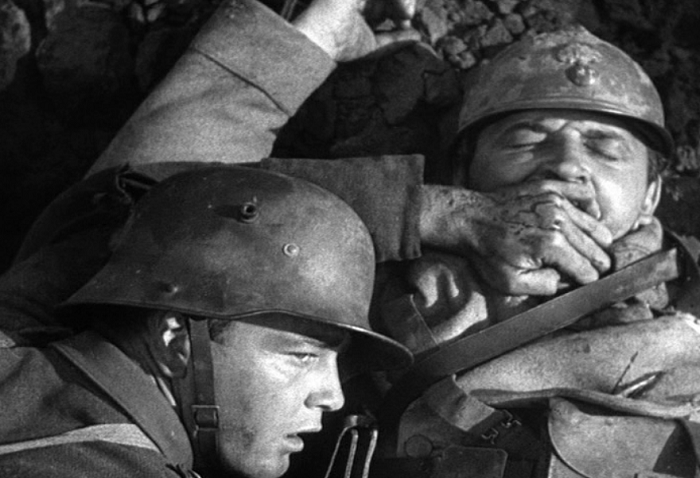 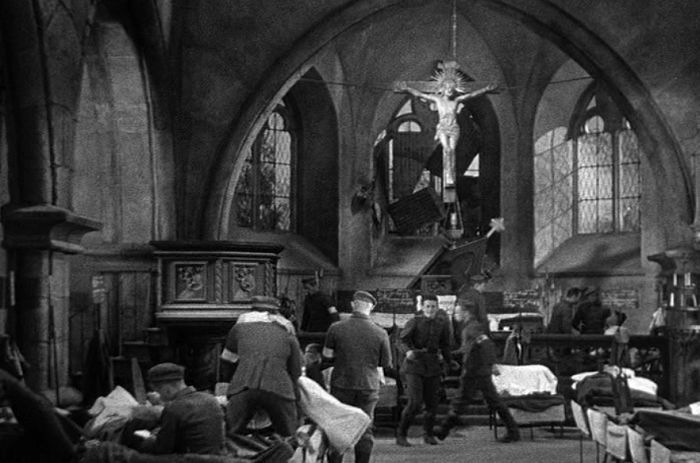 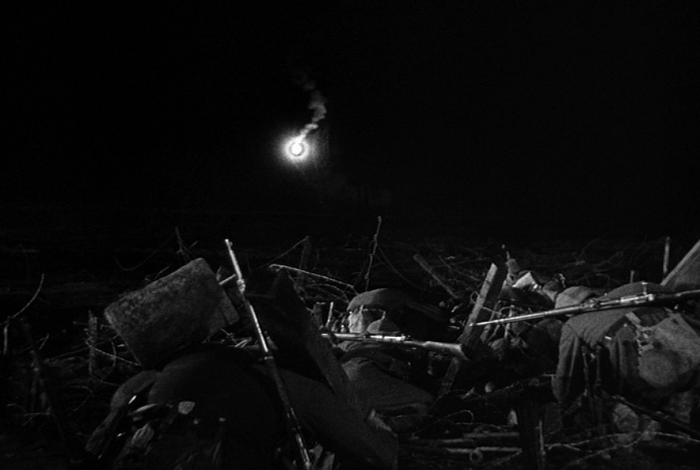 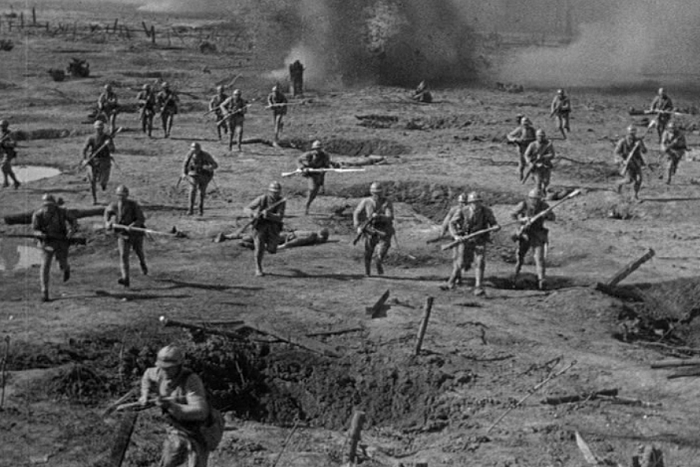