We’re Not Dressing (1934) with Carole Lombard and Bing Crosby 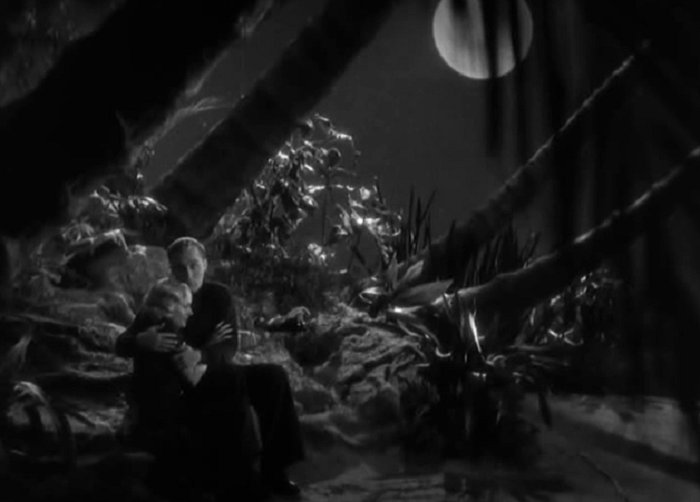 We’re Not Dressing: Because We Can’t, Really

“The shipwreck hasn’t turned out as well as I’d hoped.”

I am not the world’s first and foremost Bing Crosby fan. Or even second and secondmost. This may come from the majority of films I’ve seen of his where he invariably plays a newcomer to a stuffy town/military unit/church/pre-War Austria-Hungary Empire that simply can’t abide his hip lingo and smooth talking ways. Each is grating in its formula and presumption, desperately painting Bing as the with-it rebel out to teach everyone a couple of easy lessons about loosening up and living a hip life.

Luckily, Crosby hadn’t quite hit upon that formula in 1934, as very much evidenced in We’re Not Dressing, probably the only film that features threatened rape as part of its romantic comedy climax and an extended sequence with a bear on roller skates reeking havoc. Bing still teaches everyone a lesson and sings a few songs (five, actually, five long songs), but, save for one person, his lessons don’t stick. More on that in a bit. 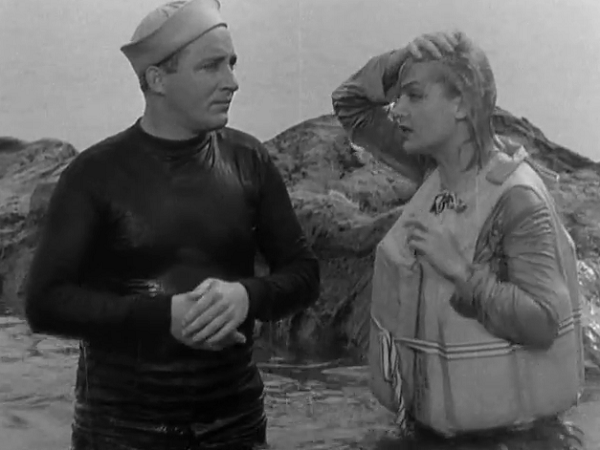 Ladies, please restrain yourself from fantasizing about the soaking wet Bing Crosby here until after this review has come to a complete stop.

He plays a sailor named Stephen who is a crew member on the over sized yacht Doris. The ship Doris is owned by the millionairess Doris (Lombard), a fickle character that is heavily reminiscent of those shrews who always must be tamed. She has a pet bear named Droopy and Stephen is assigned the humiliating task of calming the bear by crooning “Good Night, Lovely Little Lady”. Stephen is rebellious in that quiet Bing Crosby way, leading Doris to slap Stephen and Stephen giving her a kiss in response.

To kick the plot into high gear, Doris’ bumbling/sloshed Uncle Hubert manages to single handedly sink the ship. Doris and Stephen end up on an island with Hubert, his gold digging girlfriend Edith, and two gold digging princes, all dressed in evening wear save for Stephen in his sailor outfit and Doris in a robe, since she hadn’t had time to dress before the boat went down. Now Stephen is the only one with any survival skills, and the spoiled rich must learn to kowtow to him if they want to survive.

Also, not that it helps much, but George Burns and Gracie Allen are lurking on the island as well. As I noted in my review of Six of a Kind, Gracie’s ‘idiot savant’ routine is far more fun when she portrays an agent of chaos than someone the audience is supposed to have a lick of sympathy for. Here she’s especially malevolent, with her tropical island Moose Trap one of those gags that oscillates between dumb and hilarious once every few seconds. 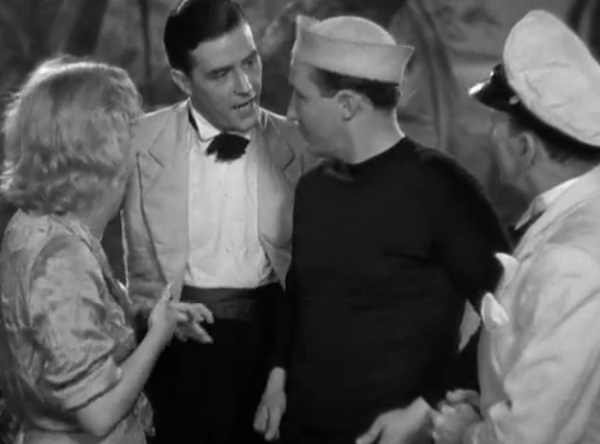 Ethel Merman has kind of a weird ‘chubby Lilian Roth/sexy Fanny Brice’ thing going on, which are not words I’d ever expected to write in my life. Merman’s quite energetic and matched well with Leon Errol, who plays a boozed, spoiled baby in much the Edward Everett Horton vein. Almost the entirety of the rest of the cast is wallpaper, including Ray Milland as one of the faux princes out to schmooze his way into wealth.

The exception is Carole Lombard. Her big break in Twentieth Century was hardly two weeks away from this film’s release and you can already see much of her comedic persona formed. Though not as elastic as she is in Twentieth, Lombard manages to wring a great deal of humor and emotion out of her rotten-to-the-core character.

Lombard’s Doris is obviously smitten with Stephen from the beginning but must overcome her own prejudices and assumptions to admit it. This isn’t easy, as Doris’ upper crust nobility has given her carte blanche to be as wicked as she wants to be, an opportunity that she seizes upon when she’s the only castaway to realize that George and Gracie’s well-equipped nature study provides the party an easy avenue to be rescued. Doris opts to keep quiet and use the opportunity to give Stephen a month’s time to be the caveman alpha-male. It appeals both to her desire to undercut him and her desire to see him without a shirt on. 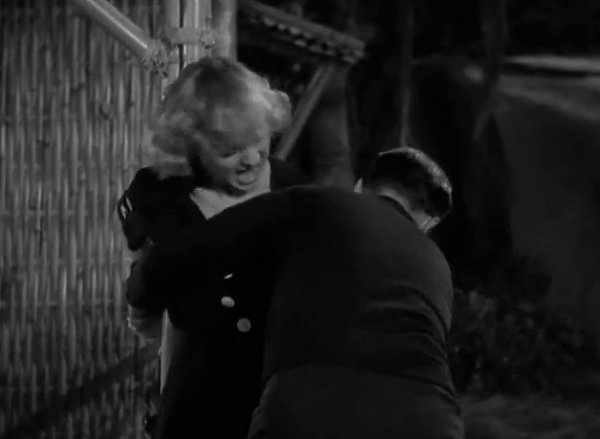 Frantic screaming and a woman being tied up– always the highlight of a romantic comedy.

Naturally such a ruse doesn’t please Stephen when it’s uncovered by Gracie. She ruins a romantic interlude to inform them that a number of ships have arrived on the other side of the island. Stephen, as I described above, feels his masculinity deflated by Doris’ manipulations, and chooses to insult her femininity in response– she’s not even worth ravaging for her deception.

It’s a decidedly pre-Code moment, something that speaks to the extreme sexual frustration they both feel for one another. Their tête-à-tête must overcome the class and temperament differences, though the movie gives us a ringer to help leap the chasm: Stephen is actually an architect who just booked his way as a crew member to get to his new job in New York.

So when he demands in the final reel that she ditch her fortune, family and friends to live with him as the major breadwinner, you know that she’ll still be okay. She’s marrying down, but still into a comfortable lifestyle– not exactly feminist, but acceptable to Depression Era audiences. The man is in charge and the shrew is tamed. 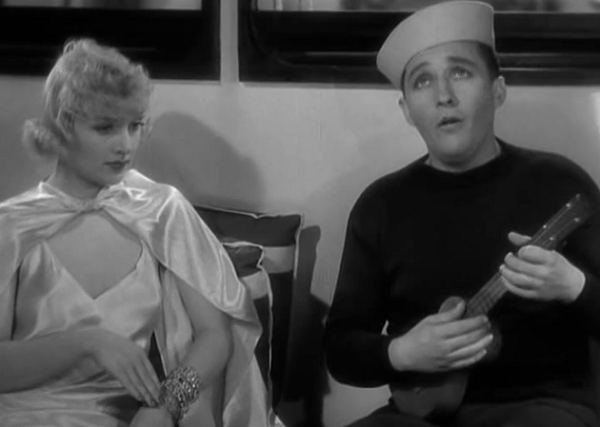 We’re Not Dressing is an oddity, one of those kitchen sink comedies that Paramount indulged in mixed with a lot of promotion for Bing’s newest album and the George and Gracie comedy team. Somehow, in spite of its messiness, the combination of Lombard’s fiery performance, the roller skating bear, and, yes, Bing’s low key comedy, the movie is still a fun, jaunty, and insane (if dated) piece of work. 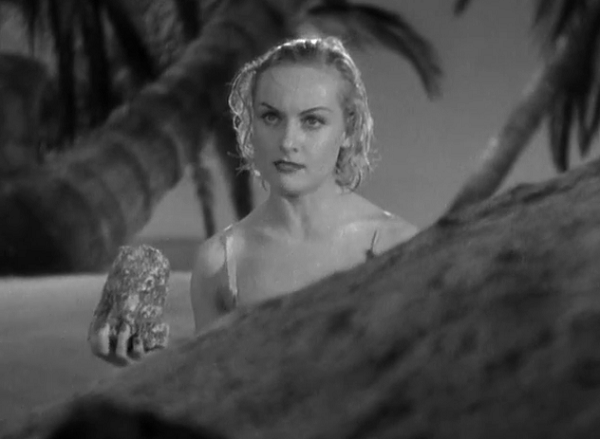 Ooooh, sit right back and you’ll hear a tale, a tale of… Carole Lombard. And a rock. 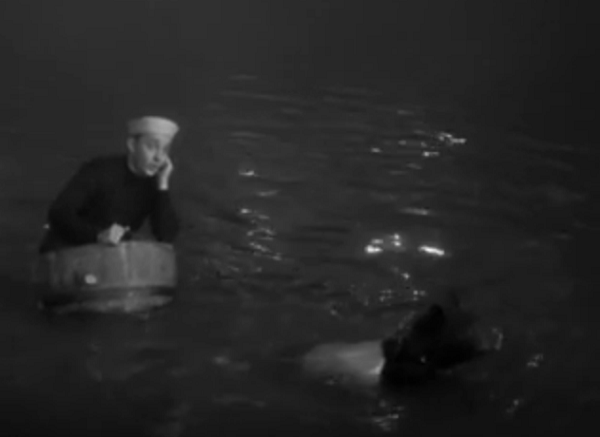 Watch the scenes where he sings to her; contrary to the usual standard Hollywood practice of having the “singee” seem politely interested and no more (therefore not to upstage the singer), Lombard goes through a range of emotions, from attraction to bitter anger at the realization this lowly sailor is getting through to her. Trim and irresistibly alluring when she’s wetted down and disheveled on the deserted island, when she finally does indulge in romance with Bing, Lombard seems as modern as any actress today; watch her sexy come-on, “Am I going to get to see your chest, sailor?” and show me an actress today who could do that better. It’s a delightful performance, and a harbinger of her soon-to-be iconic career.

I have very good memories on this one! First because it was already a great surprise to find the DVD at a fancy store here (that was back when video rental stores still existed )

Wow, very nice. I really miss having videostores around to have just such discoveries.

Nice write-up. Just thought I’d mention there were a couple of other versions of The Admirable Chrichton, most notably the Cecile B. DeMille version, Male and Female, from 1919 (obviously silent) which starred Gloria Swanson, and is on DVD. Haven’t seen it myself yet, but I have heard good things about it.

Thanks for the tip! I don’t watch many silent movies these days, but it’s hard not to go for Swanson.

For some unholy reason Paramount saw fit to cut Ethel Merman’s only song, a two and a half minute long production number, “It’s the Animal in Me.” Totally over the top, and done with both chorus girls and elephants performing Berkeley-esque routines in the jungle. I understand Ethel was not pleased, but I’m sure Crosby was. Her routine totally eclipsed his shtick and would have raised this film far above its current level of “just another Crosby movie.” For those who are interested, her number is on YouTube and can be accessed by searching their site for “It’s the Animal in Me Ethel Merman.” It is easy to tell where they removed the number, because the lead-in music builds up to nothing more than a splice. Paramount, not wanting to let it go to waste, spliced it into another movie, “The Big Broadcast of 1936.” Although not evident in the final cut of the number, there was something rather pre-code going on behind the scenes which Ethel wrote about in her book. It seems one of the chorus girls, disobeying instructions on NEVER trying to perform with animals while she was having her period, went ahead and did so anyway. The elephants were not fooled and chaos ensued. (Must have been the “Animal in them.” Or her). To bad there are no outtakes to be seen from that day’s shooting! ..

Wow, what a story! Here’s the musical number, which is absolutely nuts. I can almost see why it was removed since it’s over the top even compared to the rest of the film, but it would have at least complimented the skating bear.