Don’t laugh at your own jokes. Maybe everyone in the world already knows this, but it bears repeating, especially when you’re a comedian whose entire genre is the sideswiping wise crack; don’t laugh. You should be above it.

In the meantime, there’s not much that ranks below Everything’s Rosie, the kind of picture that classic movie fans would normally discuss with apologetic tones and an emphatic pity. RKO, splitting up it’s major money-making comedic duo of Wheeler & Woolsey in an attempt to double their profits, crafted a pair of major duds in the resulting pictures. (Wheeler’s was the deeply uninspiring Too Many Cooks.) Both suffer from a level of American mythic sentimentality that takes their normally anarchic leads and turns them into sympathetic dopes. These movies serve as a portent of what the Marx Bros. would encounter at MGM– lop off the edge and make them some guys who love a good laugh now and then, but are also happy to play cupid or rap serious as needed. 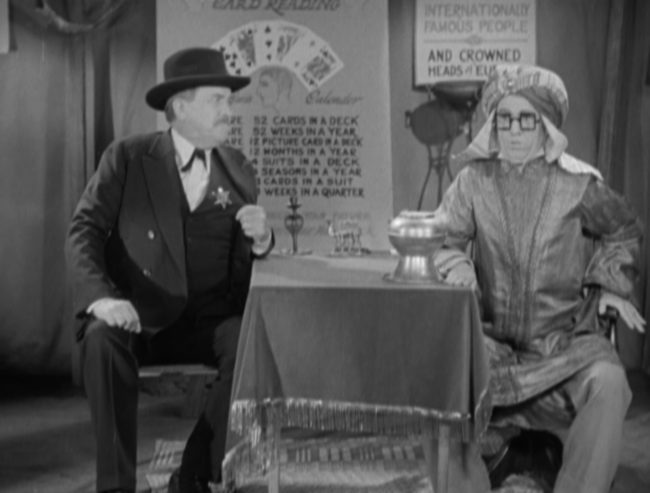 Wheeler still had it worse, but Woolsey’s Everything’s Rosie is no slouch in the galaxy of mediocrity. Woolsey plays Doctor Droop, a traveling medicine man who hawks garbage products at every whistle stop. His only sin, the movie assures us, is being too cheap to get a license. He’s run out of town, and, on one occasion, acquires a plucky young orphan that he raises to adulthood. Maybe plucky is the wrong word– present. A present orphan, who is there to be there. Her name is Rosie, and the movie returns often to the refrain, “Everything’s Rosie!” I’m not sure that was a good idea.

They roll into one town and Rosie meets a handsome, dopey lawyer from money named Billy. Rosie wants her, so Droop sets himself up as a foreign dignitary. There’s also an auction in here for some reason and a pair of thieves to help squeak out a third act. 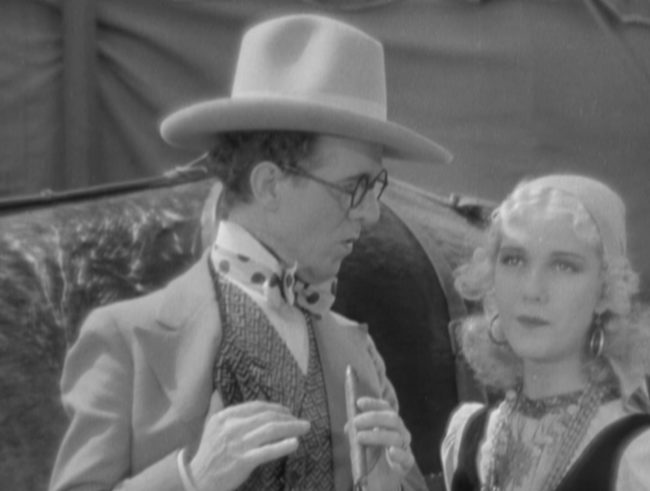 You know who could have made this better? No one. It’s awful all the way through.

Woolsey sprouts out a never ending array of one liners, but the effect is a little more depressing than mirthful. Perhaps worrying mightily that the audience may not be on Woolsey’s side (or just that they’re incredibly thick), the film arranges it so that characters stand around and reaffirm the plot every few minutes. Often side characters talk about how likeable Woolsey is as well. The characters know he’s funny, so there’s no comedic friction; it’s just a big talker having a good laugh with some lightly unsuspecting dopes.

It can get quite painful: without a partner, Woolsey must try and take the audience into his confidence. Failing that, he’ll laugh wildly at his own jokes. They aren’t exactly winners, either, usually winking gags like, “Here’s to short skirts and low necks– may they never meet!” It’s all being a smartass, nothing to be a smartass about. The rich people here win the day be reaffirming the class lines, and Woolsey rides off into the sunset. 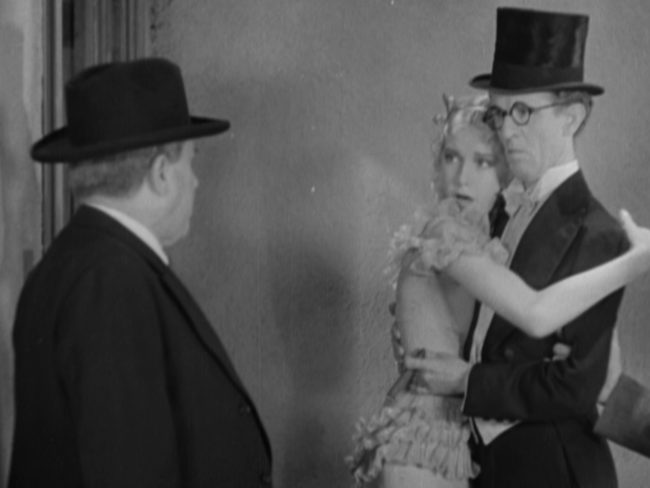 John Darrow is inoffensive as the handsome young man. Anita Louise is breathless and pretty lousy in an underwritten part; she’s either set at heartbroken or fawning, never anywhere else. As such, the movie doesn’t earn it’s maudlin ending. I’m not sure what ending it did earn, although if there was any mercy in the universe, it would have come 66 minutes earlier in the picture.

Perhaps appropriately, Woolsey spends a good chunk of the movie huckstering rubes with a shell game. Everything’s Rosie obviously takes its direction from that; no matter where you look, nothing’s there.

Everything’s Rosie has an impeccable comic pedigree. Director Clyde Bruckman and writer Al Boasberg had worked on some of Buster Keaton’s greatest films. Co-writer Tim Whelan had written for Harold Lloyd and Harry Langdon, while dialogue writer Ralph Spence had written titles for some of Marion Davies’s best comedies. Throw in the beauty of the 16-year-old Louise, and you have a charming little film.

One of the cinema’s minor indiscretions, an item entitled “Everything’s Rosie,” was inflicted last evening on a small audience at the Globe which found it as lacking in wit as in intelligence and ordinary good taste. Its intention possibly was to while away sixty minutes or so in a mild and harmless spirit of fun, so that one should not hold too strongly against it the unfortunate fact that its net achievement reached new depths of low vaudeville humor and backstairs conduct.

This, like all your articles, is an interesting and informative review of a pre-Code film. I use your website as one of my primary sources for information and research about the pre-Code era.

I am hosting “The Great Breening Blogathon” in October: https://pureentertainmentpreservationsociety.wordpress.com/2017/09/07/extra-the-great-breening-blogathon/. Although my website and blogathon are dedicated to celebrating the Code, whereas yours is dedicated to celebrating the pre-Code era, I think you might enjoy participating in this blogathon. As the title implies, one of the primary elements of this breening pre-Code or post-Code films. I would be honored if you would agree to breen a pre-Code film for this event. You don’t have to agree with the Code or Joseph Breen to participate; it might be fun to have a contradicting opinion.

I hope you will honor us by joining. We could really use your talent and experience!