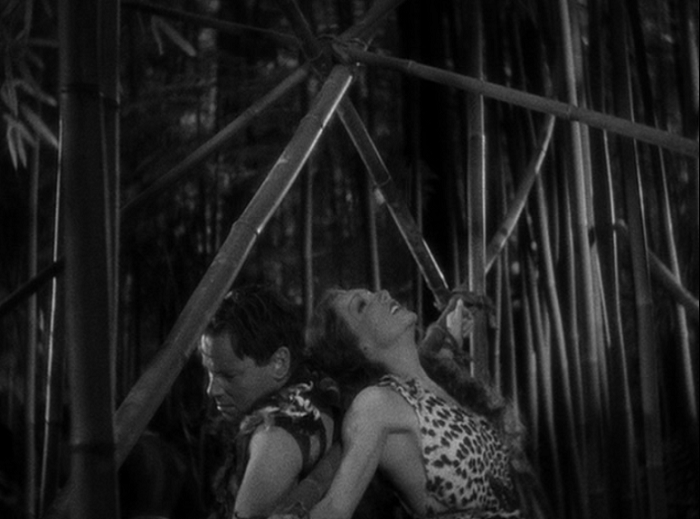 Four Frightened People: Lost in More Ways Than One

Colbert’s ability to transform herself pays off in Four Frightened People where she begins the film as a school teacher, horn rimmed glasses and a tight bun to the hilt. The story opens with her Ms. Judy Jones kidnapped from a tramp steamer off the coast of Malaysia. Three other Americans– a journalist named Stewart, a bitter chemist named Ainger, and a flirty socialite named Mardick– have learned that there’s been an outbreak of bubonic plague on board, and commandeer a fishing boat to take them ashore. Irony piles up as the village they’re brought to is fighting an outbreak of cholera, forcing them to take a guide, Montague, and head out into the jungle to make their way to civilization.

Each character has their quirk and character arc. Stewart is a braggart, a man whose career has turned him into what he thinks is a natural leader. He resists Judy’s flirtations– “Girls like her chaperone themselves!” — and bosses Montague around, especially when it comes to standing up to dangerous animals. Ainger is dour and snipes throughout their journey, defeated before they even got off the boat. Mardick, on the other hand, is flighty and carefree, spending the entire trip touting a small Spaniel under her arm and applying makeup as needed in the sweaty jungle.

Judy feels freed by the new environment whenever she isn’t terrified by it. Their journey through the jungle sets the quartet against threats, starting small and slowly growing. From the bacteria we get to dirt and bugs, then water buffalo and leopards, and then finally the most difficult obstacle to overcome in the wilds of the jungle: other people. While they encounter these challenges, the group soon finds their old clothes turned to tatters and ripped away.

They also find their old personalities shifting. Stewart loses his arrogance, and his parlance turns more and more into desperate bragging about his old days. Judy becomes a fierce leader, sick of indecision and bickering, with her inner teacher coming out as her glasses come off. Ainger admits to himself that he’s become beaten down in his high society marriage and becomes freed by his new surroundings. And Mardick is kidnapped by a tribe for ransom– where she quickly and painlessly takes it over by earning the trust of the women, forcing their husbands to acquiesce to their collective will.

The two men begin to compete for Judy after they spy her under the waterfall. While she may have Stewart’s lust, she never earned his respect and she swiftly tells him off. She instead falls for Ainger in spite of his marriage, and the two develop an intense passion and matching leopard-skin wardrobe collection. After a bungle by Stewart results in a skirmish with a tribe of pygmies, the remaining group is trapped. Luckily the pygmies don’t kill white people– they’d rather tie them up and leave them to starve to death.

Stewart had luckily escaped in the melee, and, in one of the many sequences that show off what an self centered jackass he is, takes his time to get back to rescue Judy and Ainger. The three continue in the jungle and the conflict comes to a head when Jones and Stewart discover a way out of the jungle. Earlier in the film, the characters had noticed how they were changing in the jungle– Ainger notes that he and Judy, free from society’s expectations crushing them, are expanding, while Stewart, whose ego dwindles as he becomes less and less useful, is shrinking. (The euphemistic use of ‘shrinking’ and ‘expanding’ should be duly noted.)

Upon discovering the road back to civilization, Stewart cackles with glee. He’s thrilled that Ainger, who’d stolen the only woman on their expedition, would finally get back to ‘shrinking’. And Judy, not willing to lose her new found freedom, turns a bow and arrow on him. I think DeMille sadly underplays this climactic moment; Judy threatening to murder someone just to keep her illicit affair alive is thrilling, and a fascinating look at how far she’d come from the dorky teacher who couldn’t even manage to climb over a tree.

But before the climax threatens to become exciting, Ainger arrives, and he’s also found the way back. He’s forgotten how he was, but not for long. Back in civilization, he’s berated by his wife– who is utterly furious he didn’t send her an anniversary card while he was lost in the jungle– until he realizes that his life is what he makes of it.

Stewart and Mardick flourish back outside the city, as Ainger catches both of them on the radio. Stewart’s returned to his braggart ways, making up stories of their journey that paint himself as the hero, while Mardick gets her chance to use her incarceration as a lesson for girls all over the world. The four survive, but they don’t end up friends, and only two learn a lesson– you can choose not to have your neck under the heel of the world; Ainger fights it off and finds Judy, taking her from her classroom and to a new life.

Four Frightened People is a fun kind of adventure movie as long as you don’t try to apply too much logic to it. The castaways never have to worry much about water and food, and their hunting skills are apparently developed overnight. Perhaps the most silly conceit is that during their journey they build temporary structures that would put the crew of “Gilligan’s Island” to shame, including a tree house, a functional ladder, beds, chairs, carved cups, and much more, and all just for a single night’s stay!

There’s also the character of Montague. Usually I try to look at the positives of minority characters in movies of this era, but I’m having a tough time with this one: besides being a guide who gets everyone lost, he’s also obsessed with thinking of himself as a ‘real Englishman’ because of the tie he wears around his neck. The titular frightened people are abrupt and rude to him, and often condescending. Montague lacks much agency, and his death is treated like that of a small child or mentally handicapped sidekick. It’s embarrassing.

The film counteracts this by being surprisingly feminist– I know, it’s crazy to say that about a movie that features a scene of two men and a monkey with their jaws agape as Claudette Colbert traipses among the barely concealing streams of a waterfall. But Mardick is clearly a driven, intelligent individual wearing a mask of vanity. Her social concerns for the season have been about ‘reducing the birthrate’, and upon being kidnapped she unites the women of the tribe to be able to say no to their husbands. This Down with Love-esque sequence showcases turn-of-the-century changes in the social structure as women were finally given agency in their reproductive choices and they spread the gospel to the four corners of the earth. It’s played for laughs, yes, but it shows that a determined and smart woman can make mincemeat of any man who dares to make mincemeat out of her.

Like The Black Camel, Four Frightened People is shot on location on the slopes of Hawaii, which gives plenty of variety to the proceedings, from lush foliage to bamboo forests and twisted acres of roots and dirt. Because of some cuts to the film (which I’ve outlined below), it does a good job playing with viewer expectations. Much of the first part of the film is focused on Stewart and Judy, and then switches gears once the world opens up for the characters. The performances are good, with Gargan making Stewart subtly slimy and Boland playing ditzy but knowing with a keen glee.

But Colbert makes the movie, easily, with her transformation a centerpiece of sexual awakening. Is it ludicrous? Yes. But it’s that level of ludicrous that’s hard to resist.

So while not officially an adaptation of a play, FOUR FRIGHTENED PEOPLE makes sense when you imagine it in this context. We must read the palm of this film like a reverse fortune teller: one went to the theater in the 1920s to see what silent cinema couldn’t give them, a story wherein people actually speak, and to see hot live girls in sarongs so the menfolk in the audience could lust after them via opera glasses. Jungle films allowed, nay enforced, a strict dissolution of the then extreme moral code. One simply couldn’t sleep in separate bedrooms when on the jungle floor with snakes and tiger and lusty skulking natives all around. It was too hot to wear a corset, and good luck trying to keep your full-body swimsuit intact should you stumble on a swimming pool or waterfall.

At its core, Four Frightened People is about the destructive power of self-deception and self-doubt masquerading as bravado or cynicism. All of the characters are guilty of some degree of personal delusion, whether self-aggrandizing (as in the case of the blowhard Corder) or self-loathing (a failing of the defeated Ainger, who masks his anguish with withering bon mots). Of course, the trial-by-fire of these damaged protagonists is just what the doctor ordered, with their perilous jungle passage stripping away (along with their tattered city clothing) layers of learned behavior and soul destroying socialization to reveal the essential, vital people beneath. This transformation is illustrated most dramatically in the case of Claudette Colbert’s mousy Miss Jones, who goes from a bespectacled and easily spooked spinster to an emancipated jungle queen in only a matter of days, turning her aloof male companions into instant romantic rivals.