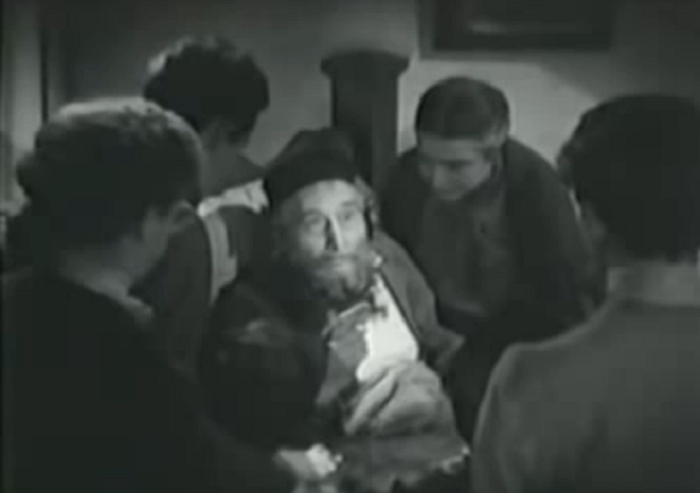 The House of Rothschild: Wheeling and Dealing

A few weeks ago, while checking my traffic (because I have a massive ego and must constantly be reaffirmed that people are reading my website for more reasons than placing ‘nude Joan Blondell’ in the metadata), I noticed an odd incoming link. Weirdly, my political views had been brought up in a discussion at a conservative website where they’d been debating whether Hollywood truly salivated over Franklyn Roosevelt and his election.

I’m more or less liberal in my own ways, sure. But were the film studio heads liberal? For the most part, yes, though Louie B. Mayer was and remained a devout Republican. Many studio heads and administrators were Jews from the east coast who had worked their way up in their business until, by the early thirties, dozens of small silent film outfits had been consolidated into five major studios. Some ruled with an iron fist, others were more relaxed. They were Jewish, yes, but they were businessmen as well. Many directors, writers and stars leaned that way, too, but conformity was never demanded. Just because you worked for Louis B. Mayer or William Fox didn’t mean that you liked the Jewish race.

Portrayals of Jews in the pre-Code era, like those of most other minorities, were mixed. Sometimes you’d see a scene like in The Mayor of Hell where a Jewish father tenderly speaks to his son in Yiddish before the boy is to be sent to a penitentiary. Most of the time, though, it was comic relief like the small Jewish boy complaining about the price of ice cream cones in The Big Shakedown. Jews love money. Their voices are whiny and high pitched. Oy vey.

I bring all of this up as a way to help explain the incongruous existence of The House of Rothschild, one of the more controversial outputs of the pre-Code era. It seems pretty innocuous: an autobiography of one of the wealthiest men who ever lived and how his financial deals helped save Europe from Napoleon. But then point out that he was a Jew and use his story to directly refute their treatment in Europe– being forced into restrictive ghettos, heavily taxed, and terrorized en mass– and you’re really getting somewhere.

The man at the center of this is Nathan Rothschild, a London banker. His father, on his deathbed, instructed Nathan and his four brothers to leave their Jewish ghetto in Frankfurt and become bankers in the capitals of Europe. Since the brothers trust one another, they can extend each other lines of credit across international boundaries without the risk of transporting gold across borders.

This hegemony works to their great advantage as the Napoleonic Wars rage on, giving the allies a bankroll that helps unite them. After the war is finished, though, antisemitism persists (believe it or not). No longer requiring the Rothschild’s capital, Ledrantz, the chancellor of Prussia (a country which may or may not include modern Germany) eagerly seeks to remind the Jews of their place, which may or may not include extermination.

Nathan’s life is also complicated by his daughter, Julie. She’s in love with a gentile captain in the British armed forces. Nathan and his wife, Hannah, are fine with this for the most part, though they fear that the gentiles will never accept them as one of their own– understandable in the circumstances, of course.

The film shines when it lays into its political intrigues, deftly showing how financial dealings can be used for social leverage. As Mayer explains to his children, “Money is the only weapon the Jew has to defend himself with.” Nathan’s dealings are sometimes shady but always fall under his own brand of ethics, one that believes in a greater good and a peaceful world.

Of course, the film has its flaws, too. The love plot between Julie and Fitzroy is dead weight on the screen, even as it emphasizes how social boundaries can change over time. There’s just no heat to it, as Young and Young (no relation) simply do their star-crossed bit and shuffle off.

The rest of the cast, however, handles itself remarkably well. George Arliss, in the dual role as both Mayer Rothschild and then as the grown up son Nathan, expertly creates two completely separate men from the same cloth. They have different slouches, different mannerisms, and different temperaments. Through the fuzzy haze of YouTube, it’s hard to believe they’re even the same actor.

The film has two other standouts. C. Aubrey Smith as the profane and boisterous Duke of Wellington is a hoot, possessing an attitude of honesty and kindness that’s clearly missing from the film’s politicians. The great Boris Karloff is at the opposite end of the spectrum, a bigot who is eager to persecute and cordon off the Jews in their ghettos and, whenever the opportunity arises, exterminate a whole swath of them. Karloff is slow to speak for the role, putting on a face for the outside and cackling behind closed doors where others can’t go. He’s a man with a clear knowledge of the politics of hate, and Karloff handles that slimy cruelty with a masterful amount of smarm.

The House of Rothschild can be viewed as different things to different people. A warning against the impending Nazi threat, a piece of feel-good Jewish propaganda, a jaunty autobiography of one of the richest men who had ever lived, or, as I believe, a plea for racial coexistence. In not so many words, the underlying theme is that war is costly and destructive, whether it’s Napoleon’s unseen rampage or the competition between the gentiles and the Jews. When they work against each other, out of spite or hatred, the two sides just make things worse.

But that’s not how everyone has seen the movie over the years. The film’s final moments, of Mayer’s voice chiming in over the crest of the House of Rothschild proclaiming the need for dignity can also be interpreted as a rallying cry. And, of course, the Rothschild’s, being one of the richest and most secretive families in the world, have inspired tomes of speculation as to their intentions and whether or not the film glosses over the more unsavory deeds of Nathan’s in order to present him as a noble wunderkind. But I’m not here to review the truthiness of the film, just what’s on screen, and as such it really is a fun, thoughtful movie and a great time capsule.

With the enforcement of the code in mid-1934, races slowly became codified by the color of their skin and not the accents coming out of their mouths. The Jews melded with the Irish, the Polish, and the other white immigrants from the last century, one morass of white for the paying public to sit and absorb. This film’s pleas for tolerance went unheard across the world as harassment continued and in Germany… well, I think you know the rest.

The film’s transparent applicability to the then-current situation in Germany (it was released just two years after Hitler came to power) leads to some oversimplification. The film uses two characters, one onscreen and one off, to evoke Hitler’s threat: onscreen is the Ledrantz, while offscreen is Napoleon. In the character of Ledrantz, the film presents us with a mad German whose antisemitism leads him to provoke pogroms against the Jews of Europe because he’s angry at Rothschild. Thus, at the same time, he’s a Hitler stand-in and a blanket excuse for the commoners who actually throw the rocks and start the fires, who are being misled by a tyrant. In a larger sense, though, Napoleon is Hitler here: he’s the insatiable warlord who must be opposed by the forces of good.

According to some sources, The House of Rothschild was not banned in Germany as expected. Instead Joseph Goebbels, the Nazi Propaganda Minister, had the film re-edited to depict the Rothschilds in a negative light, reinforcing all of the racial stereotypes that would later make German director Veit Harlan’s Jud Suss (1940) the most notorious example of this in the cinema of propaganda.