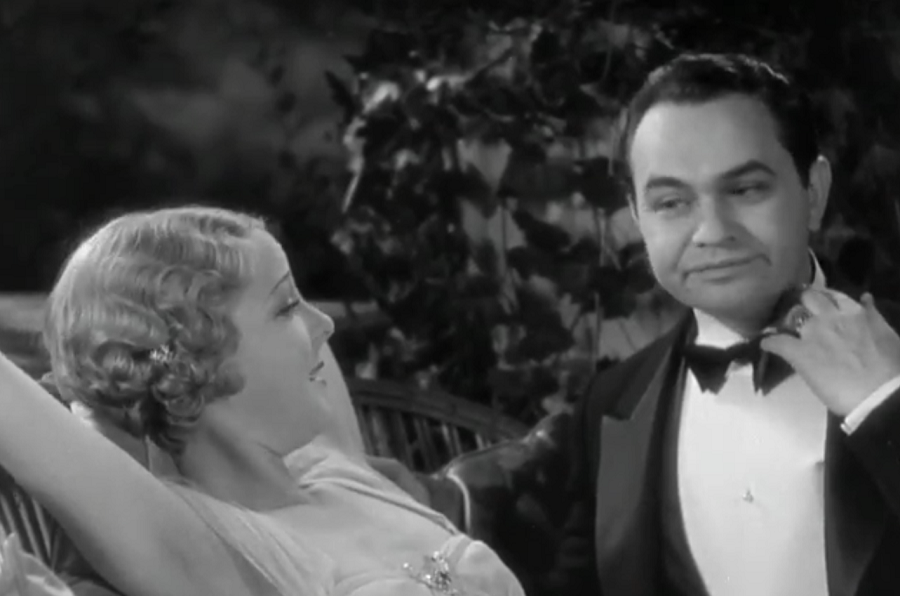 The Little Giant: Nothing Gets Him Down

“I’m all washed up with mugs. I know, I came from the gutter, but I’m stepping right out of it. I’m going to meet some real people. Do something worthwhile. Amount to something!”

I think it’s his mouth. Edward G. Robinson’s large, expressive mouth is ideal for framing emotions down to the nearest molecule– when he’s angry, it turns pointed and sharp. But when he’s lovestruck, it becomes something akin to a cartoon, a virtualization of his heart on his sleeve. So many of his films capitalize on how that mouth can move and take the audience with it, that ‘Edward G. Robinson Falls Into a Doomed Love Affair’ could probably describe half his career.

Robinson ascended to screen stardom in 1930 via Little Caesar as a small time hood who aspires to greatness as a crime boss but is brought down by bond with another man. The cycle of serious gangster films was brief as the Hays Office worried that they represented a bad influence on youngsters, censorship battles mounted, and as the bloody end of the reign of the gangsters came to a close with the dismantling of Prohibition. Where to go from there?

The Little Giant offers its take on the end of the era, showcasing mobster magnate Bugs Ahern (Robinson, naturally) deciding to close up his entire business and head to the West Coast to try his hand at a legitimate life. Spoofing Little Caesar‘s aspirational story and reversing it, we see a man of the streets attempting to be cultured, oftentimes with rather humorous results.

This includes moments where, upon discovering the ritzy hotel he’s staying at is charging $45 a night, Ahern runs around the bathroom turning on every faucet and throwing the dry towels into the full tub. (This scene definitely reminded of traveling with my father as a youngster.) A few hours later, he’s threatening a waiter to speak French to him so that a pretty girl may overhear and be impressed.

The girl, Polly Cass (Vinson), turns out to be something more detestable than a gangster on the mend– a chiseler, and, worse, the daughter of a banker. The banker, Donald (Churchill), sees Ahern as the perfect mark, and his entire family is soon grifting off the hapless gangster. Meanwhile, Bugs and his pal Al (Hopton) have taken up at the former mansion of Ruth Wayburn (Astor), the only one who knows just what the Cass family is up to.

This plot, where your likeable main character gets suckered by the rich, was pretty common for the time. You grimace as Robinson gets lured further into the con, but keep a smile to yourself as you prepare for his wrath. And, man, does the movie give the bankers their comeuppance, knowing that the audience out in the dark is down with whatever vicarious thrills it can unleash on the fraudulent bankers.

Serving as both a continuation and spoof on Little Caesar, the influence of the other movie is impossible to separate from this one. That includes the film’s homosexual undertones, which sees Al’s sidekick desperate to stick with Bugs no matter what. “Where poppa goes, mama goes,” he explains. This continues with jealousy unwinding as Bugs’ pursuit of Polly becomes more prominent in their lives. Notably, Al fades to the background in the film’s final act as it becomes all about Bugs’ wrath

The acting in the movie is all fine, though I wanted to call special attention to Shirley Grey who plays Edith, Bugs’ girl in Chicago who he casually pays off before making his way to the coast. She embodies a sense of noble tragedy about her that quietly steals the scene from Robinson– not easy to do. Everyone else is fine, and Robinson again shows why he lasted beyond his Rico persona– he can poke fun at himself, but still find the quiet tragedy in a tiny little monster.

Many pre-Code films saw the upper class and their love of ‘high culture’ as a con on the lower classes. Little Giant is a bit more democratic about it; high culture may be dumb and bloated with phonies, but it’s only the crooks you have to watch out for. The film’s denouement, as the Chicago mobsters do their inspired take on polo (which, of course, involves firearms) is kind of longwinded and silly for modern audiences, because it belabors the point– the pretensions of the rich can only be made better with a bit of lower class common sense added in. But, other than that, the film’s humor and story line of victory over the real leeches in society, still works 80 years later.

In New York, Robinson tried to walk incognito down Broadway, visiting his old haunts, but according to his memoir he was often recognized and taunted by tough New Yorkers, along the lines of “Tough guy, huh? Little Caesar, huh? Well, let’s see how tough you are. I can knock you into Tuesday!” To deal with this, Robinson “sought refuge in hotel lobbies pleaded with walking patrolmen for assistance [and ultimately] gave up walking on Broadway.” Taking taxis, “the usual tip of a dime on top of the fare would be thrown back at me, a quarter was reluctantly accepted, and a dollar seemed required.” Life of a star, it seemed, was not as easy as it appeared, and Robinson finally agreed to return to Hollywood to shoot The Little Giant in a shortened time frame so that he could be back in New York for his child’s birth.

“The Little Giant” is the least known of four comedy gangster films Robinson did in his career, at least with him in the lead, and deserves to be known better than it is. TCM always has the other three in their rotation (The Whole Town’s Talkin’. A Slight Cast of Murder and Larceny Inc.) however, this one seems to have fallen off the map. It deserves better.

While Silver Dollar and I Loved A Woman demonstrate Warner Bros’ feeling that Robinson was destined for better things, Little Giant suggests more persuasively that pre-Code audiences already loved Eddie just as he was.

2 Replies to “The Little Giant (1933) Review, with Edward G. Robinson and Mary Astor”