“Well, I’ll give you three guesses.”

The Man with Two Faces: Just One More Thing

“Brains and talent don’t mean much to the devil.”

Okay, brief side track before I dive into today’s review– how many people out there enjoy the show “Columbo”? It’s a favorite of mine, taking the usual formula of a detective mystery and inverting it. We know that the crook committed the murder, and we see the ways in which they cleverly covered their tracks. But, in the end, the ever persistent Columbo finds their one mistake and breaks the usually self-satisfied killer. 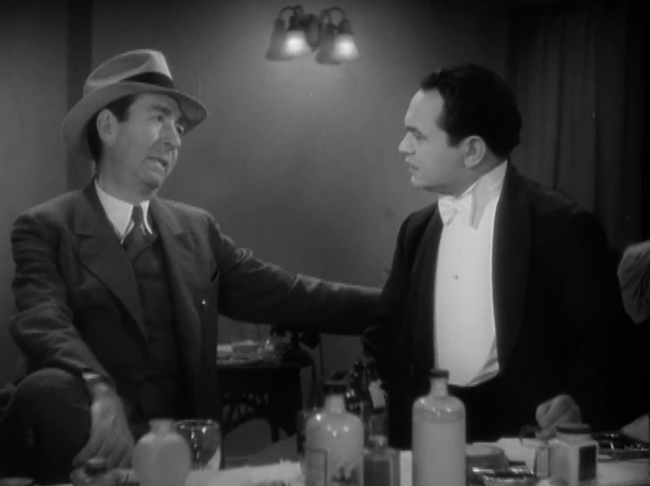 I mention that, of course, to relate it to today’s film, The Man With Two Faces. Based on the stage play by George S. Kaufman and Alexander Woollcott, its original story contained a devious twist, one set to keep the audience stunned. Andre Sennwald, from his contemporary review in the Times, explains:

The murderer of Stanley Vance, as originally plotted, was a dark secret which playgoers were on their honor not to reveal even to their intimates. So heavily did the play hang on the ultimate revelation of the killer’s identity that it was like knifing the theatre in the back to whisper that the mysterious M. Sarnoff was only Basil Sydney with a false nose and a pillow under his coat. In the film, Mr. Robinson, having poisoned the obnoxious husband of his sister (there-by, as one of the players remarks, commending himself for the Pulitzer Prize), calmly doffs his wig, removes the putty from his nose, and invites the audience to applaud a skillful piece of ham character acting.

The filmed version, here, throws the twist out the window by virtue of its title alone. The movie isn’t terribly clever about the whole switch, and it’s hard to believe that the movie wants to accept Robinson as even a Lon Chaney Lite. I mean, any half-witted mystery fan can decode the film’s mysteries that are so inglorious that they’re even spoiled on the film’s poster. But that doesn’t make the movie any less fun, and that takes me back to the “Columbo” comparison. We watch the crime unfurl and then get teased as the detective, Curtis (David Landau), carefully figures it out. 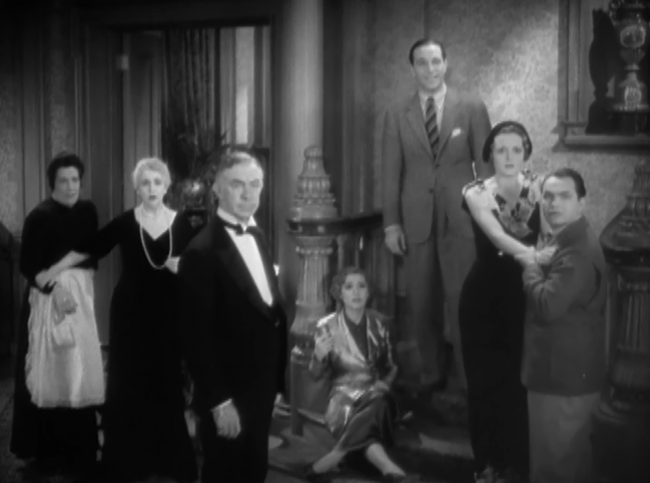 Guess who’s back. Back again.

But I’m putting the horse before the cart (or vice versa): actor/director Damon Wells (Edward G. Robinson) is one of the stage’s most famous and popular character actors, and he knows it all too well. The only thing in his life that he really seems to love is his sister, Jessica (Mary Astor), who was once a big star and is now on her way to a comeback. The problem used to be her scummy husband, Vance (Louis Calhern), a Svengali-type who controlled her through a mix of hypnotism (no, really) and physical abuse. On the opening night of their new successful play, Vance returns from a faked death, still alive and eager to fleece his wife. Damon decides to rid the family of the pest once and for all, and things go well until Curtis puts the pieces together.

The Man with Two Faces is pretty fun and playful, which saves the overtly silly mystery from weighing things down too much. Much of the comedy comes from rest of the cast, like the maid Hattie (Emily Fitzroy), whose utter loathing of Vance and his pet rats allow her to indulge in her most hateful instincts. Then there’s Daphne (Mae Clarke), Damon’s drinking buddy and occasional lover, though his regard for her is negligible. Clarke is very good here as her character overcomes plenty of jabs from a conceited Damon and still shows of her wit and charm. She even gets to sing a nice bit of “Stormy Weather.” 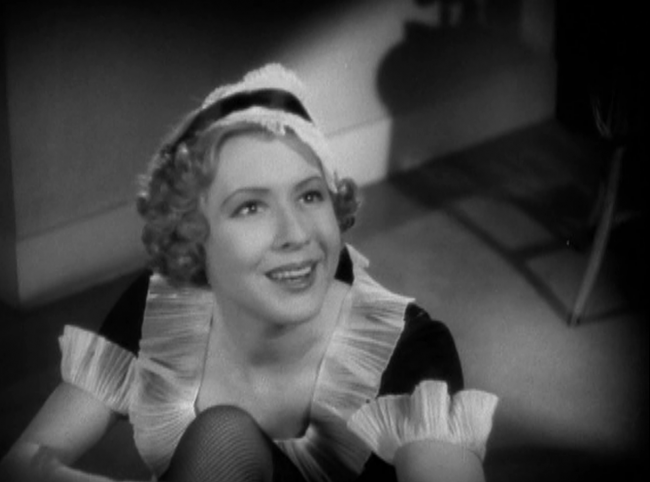 Also fun: Ricardo Cortez plays Jessica’s new, nicer lover, which is especially funny since Louis Calhern’s part as the gleefully scummy husband would be in most other movies “The Ricardo Cortez Role”. On a different tact, Astor is more or less wasted. The hypnotism that Vance exerts is poorly defined and gives the movie a mystical bent that never really pays off. That renders Astor a zombie for most of the film and renders her character inert.

Despite that, the film’s final scene as Curtis faces down the smarmy Wells is solid gold, a wonderful mix of amorality, admiration, and smarts. The Man with Two Faces isn’t a great Warners picture, but it’s a fun showcase for Robinson (both of him) and contains a nice streak of coldness that keeps things interesting. It’s yet another pre-Code wherein a scumbag is murdered and the world rejoices, and justice is simply that. There are parts that work better than others, but, honestly, the parts that work work well. 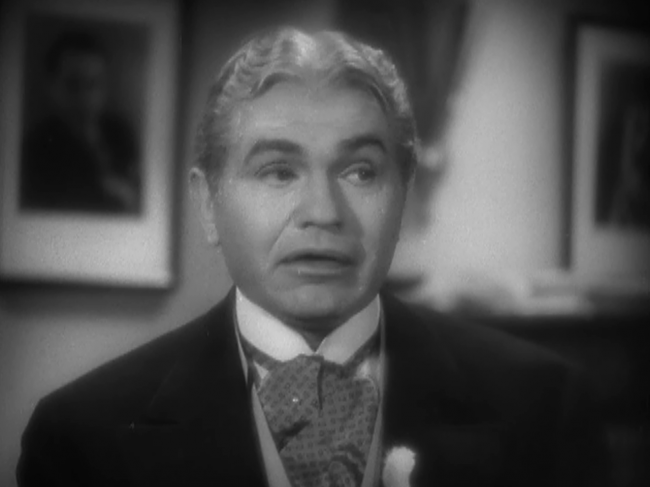 More than meets the eye.

Robinson’s thespian sister is played by Mary Astor, who harbored a rather dark secret during production of this picture that would explode into national headlines just a couple of years later. As The Dark Tower was closing on Broadway, the married Astor was beginning a torrid affair with Kaufman, also married but well known as “Public Lover Number One” for his numerous dalliances with some of the most desirable women in show business. Astor and her husband divorced in 1935; a year later, during a custody battle, he threatened to make public her diary, which reputedly made many breathless, salacious references to her sex life with the playwright. The diary was never admitted as evidence, but it became a hot topic of conversation. Although the scandal had great potential to derail her career, Astor emerged unscathed. In fact, it gave her a professional boost. As for Kaufman, well, it didn’t hurt his reputation any, either as author or lover.

Sounds like a great one! I will have to keep an eye out for it!

Hope you enjoy it!

Have seen this one. Liked it a lot too. Edward G Robinson was great in this, and Mary Astor, and Louis Calhern

Robinson is definitely having a good time doing a few disguises for sure.

Good film, but I got a kick out of the end at how Edward G. Robinson and the detective both act like he’s got Robinson dead to rights when actually he has no evidence whatsoever. All he has is 1) his own knowledge that Robinson once played a character that resembled the French Canadian guy, and 2) the fake mustache. He has no prints, no witnesses, no incriminating evidence besides the mustache, and no way to tie the mustache to Robinson. Robinson should have just blown him off and gone out to play his part.