“Now what do you suppose made me think of sex?

“I can’t imagine. Most men never do.”

Midnight Mary has one of the best opening sequences, I think, of practically any film. We begin with a district attorney ranting, raving about a murderess, aiming his finger directly towards the camera as we find ourselves among a stoic jury. He warns us, spits invective and then rants angrily at the defendant. It’s then we’re treated to our first shot of the hardened criminal sitting behind him. Her eyes glance up casually from the issue of “Cosmopolitan” she’s reading; is he still talking? 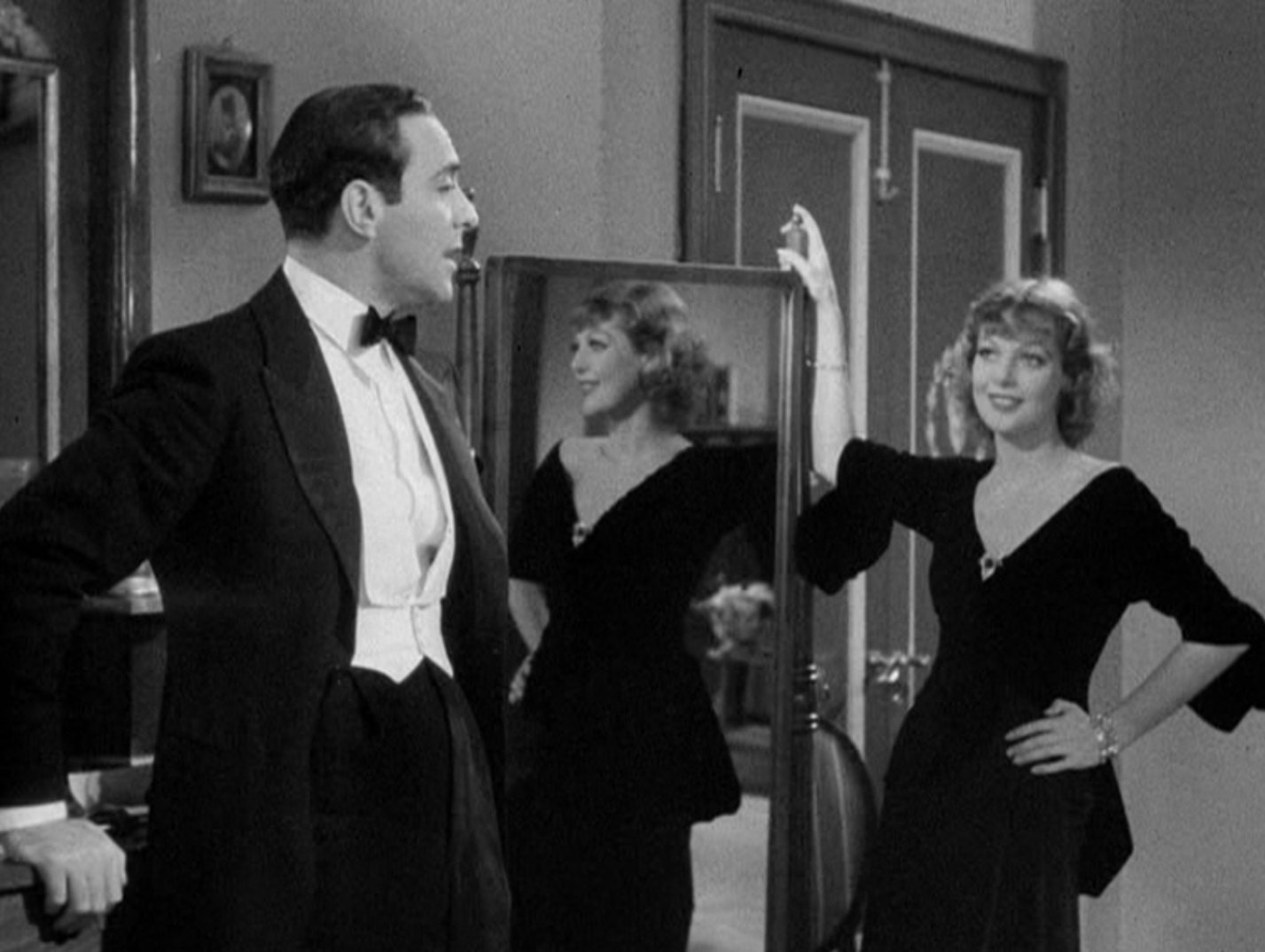 The story of a good girl boxed out of life by prejudice and an uncaring justice system, Midnight Mary is an empathetic portrait of just how rough things could be for women in the early 1930s. Told in flashback as Mary (Young) sits in the clerk’s office, awaiting her verdict, the film jumps across the book spines, taking us back to Mary’s youth. Her mother dies and shortly after she’s mistakenly sent to jail for three years for petty larceny. After serving her sentence and without many prospects, she ends up in the care of Leo Darcy (Cortez), a hood working his way up to ringleader. Mary doesn’t care for crime, but she finds Darcy– and a comfortable lifestyle he represents– nearly impossible to resist.

It’s not that Mary doesn’t try to go legit several times in the picture, even completing secretary school with some help, but the doors of opportunity are limited to ex-cons, especially women who are already expected in a strict patriarchal society to stay out of the labor pool. Mary’s a genuinely good person, giving to charity and treasuring art, but the power structures of money and society force her into one direction. 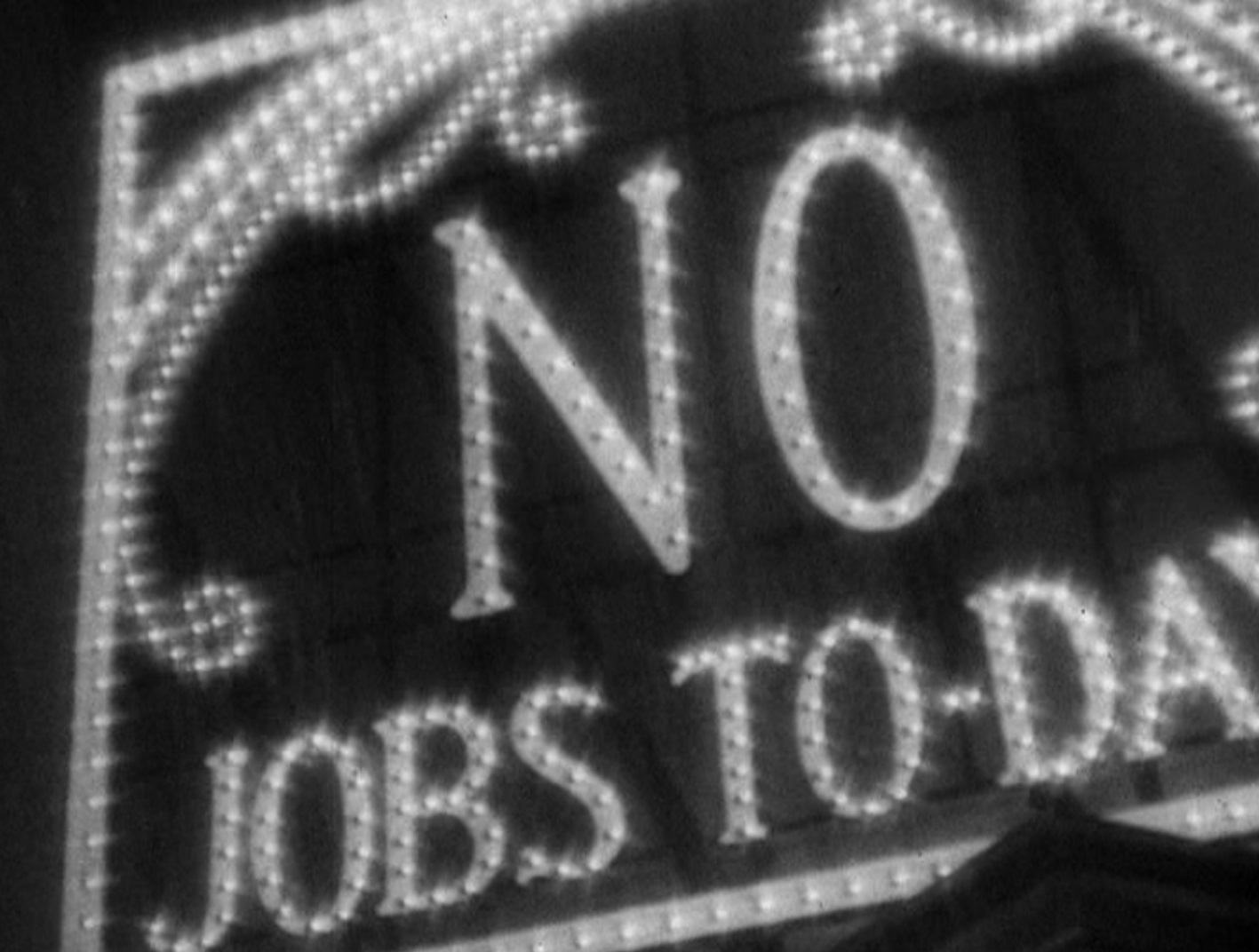 The gang she runs with, which includes the always-nasty Harold Huber and the schmuck’s schmuck Warren Hymer, are brutal slobs who eagerly turn to crime. The ringleader, Lou, is Ricardo Cortez at his most-self possessed and slimiest. His overconfidence in his own charms and infallibility get him far, but his pettiness proves to be his own undoing.

That comes in the form of handsome society lawyer Tom Mannering (Tone), who is a sweet guy who takes a liking to Mary while she’s in the middle of robbing a casino. He pulls her away during a gunfight and they end up hiding in his sumptuous mansion. Tom puts on his most charming smile, “Was that your husband… I mean, the one that wanted to use me for target practice?” Smooth, man. He helps get her set up with a job, and reminds his pal, Sam, that they can look but not touch– Tom’s apparent affection for Mary but his refusal to capitalize on the economic power he has over her is his most winsome quality. 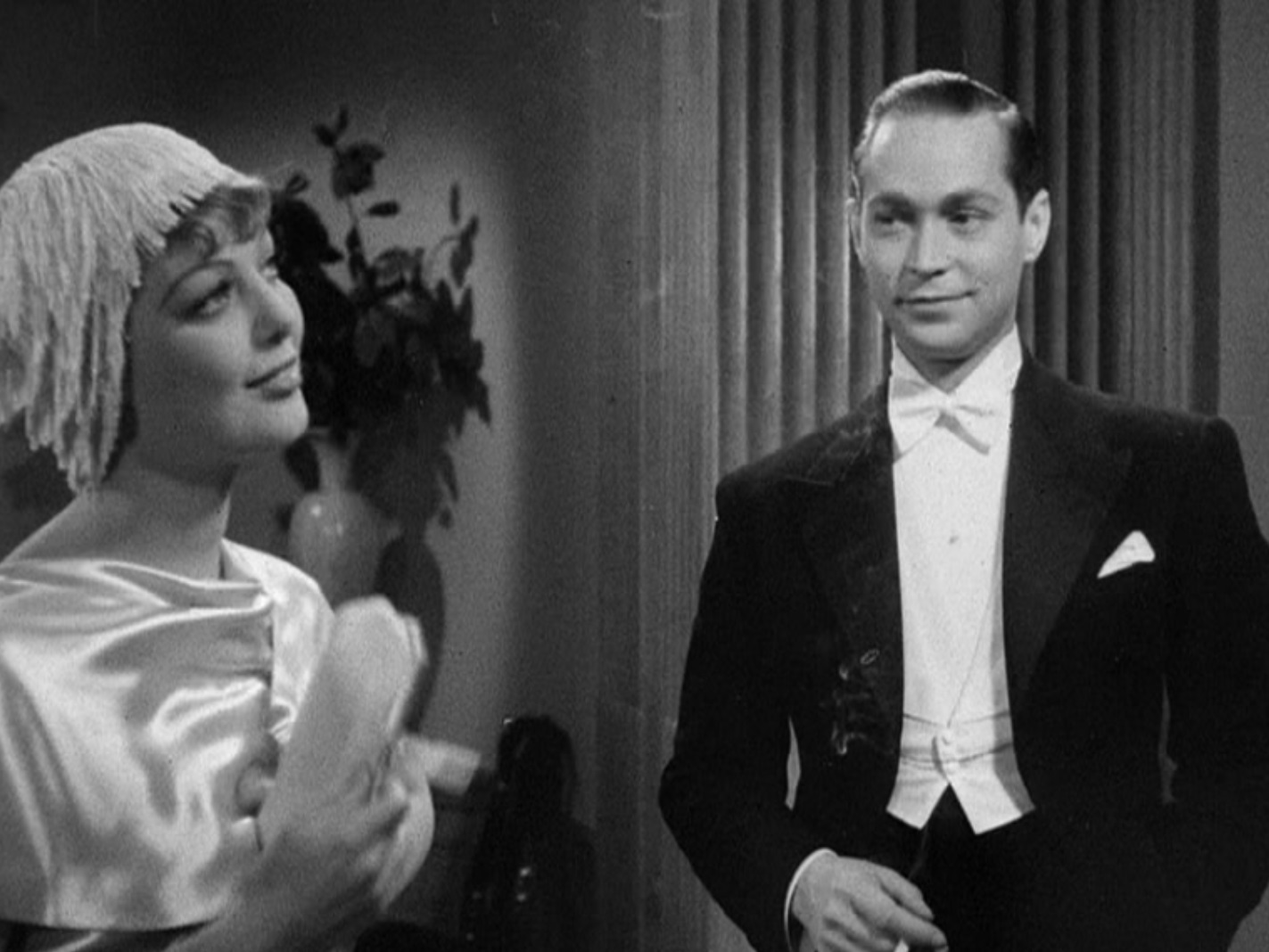 Things fall apart, as they must, and soon Mary flips back to the life of crime, big furs and fancy dresses. That’s where the murder comes in, and the audience is left to wonder just how culpable she was for her crimes. If your answer is ‘not at all’, well, then I think the movie did its job.

The sense of structure and style of director William Wellman is as patently on display as Loretta Young’s many charms. For transitions, Wellman opts, instead of a then-typical dissolve, to literally wipe the next scene in from left to right, punching up the pace of the film as Mary flips between hardship and comfort. Wellman, besides also guaranteeing Young plenty of glamorous close-ups, keeps the film lean and moody, so much so that its many implausibilities are easy to overlook. 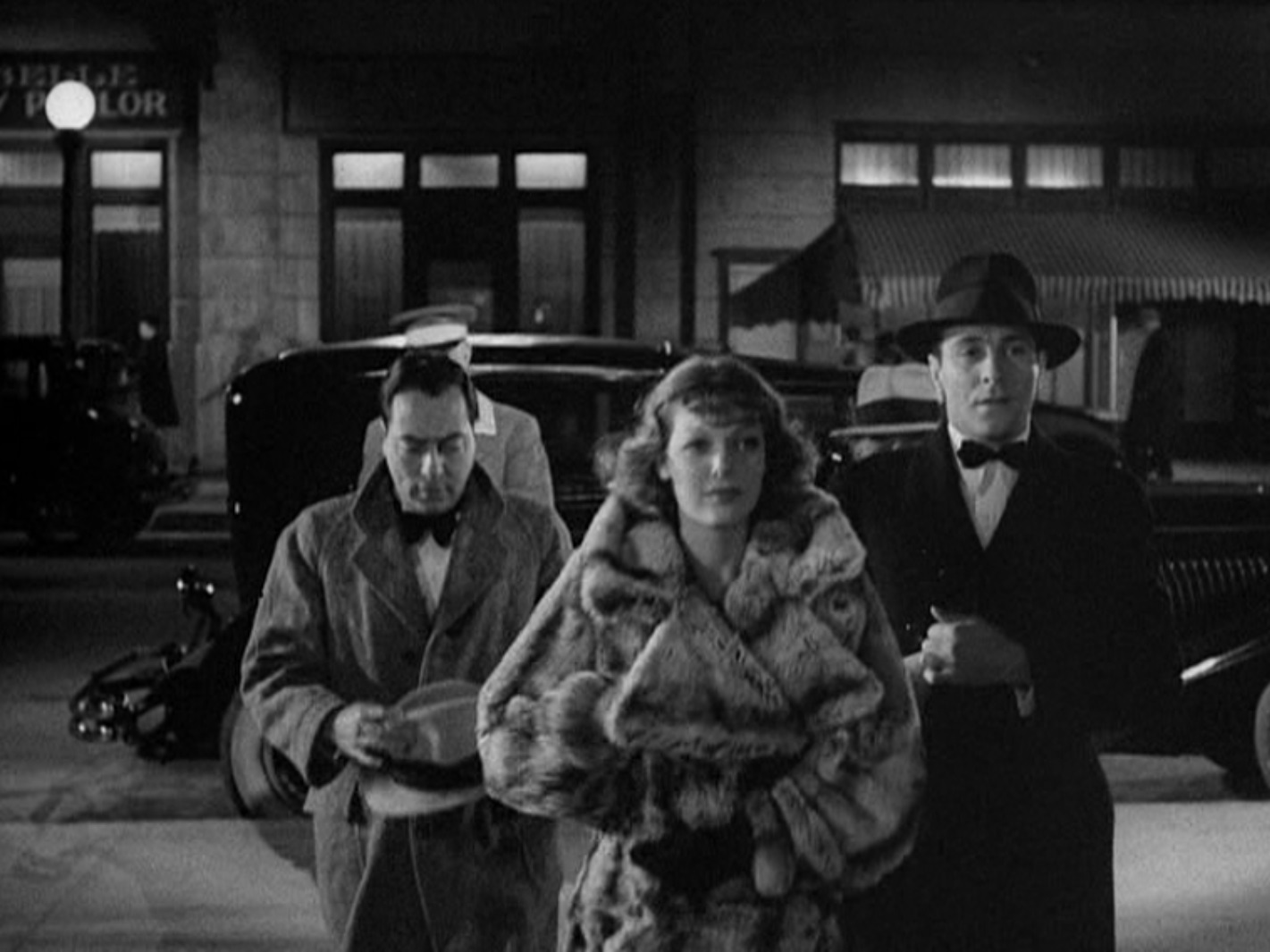 Despite a richly unsubtle musical score that almost seems to punch you in the ears, Midnight Mary has a number of shocking moments that make the film a lot bolder than its contemporaries, including the gruesome fate of one comedic character and the eager, unrestrained violence Cortez is all-too-happy to unleash on Mary.

Mary’s misfortunes and the attitude with which she approaches them are admirable. Much of what she endures is still immensely relatable, and the gusto with which the film approaches them is still exciting to watch unfold. Midnight Mary is the kind of breezy gutpunch that never gets old.

Wellman came through on the project professionally, with the possible exception being his tenuous relationship with assistant director Mike Lally, whom the director had reportedly once fired a gun at for moving too slowly. Later that year, the two would get into a well-publicized fistfight on the set of the rather ironically titled Looking for Trouble (1934).

“Midnight Mary” is an average specimen of its type. Except for a scene in which Leo clouts Mary heartily on the chin, the only surprise in the film is the discovery that Anita Loos is credited with the story. 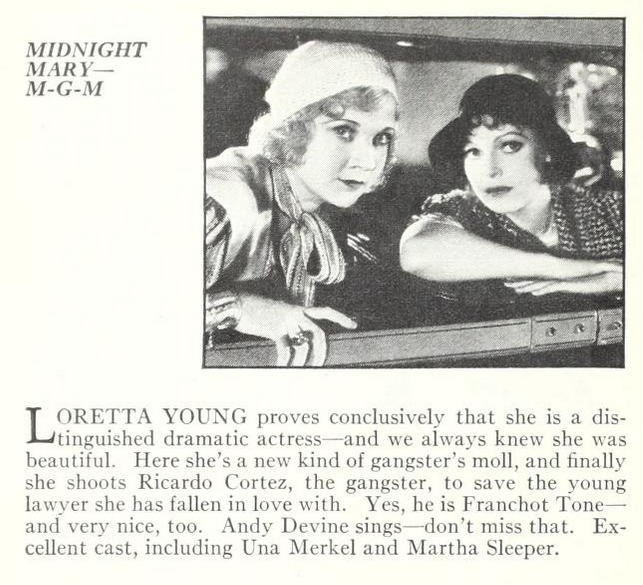 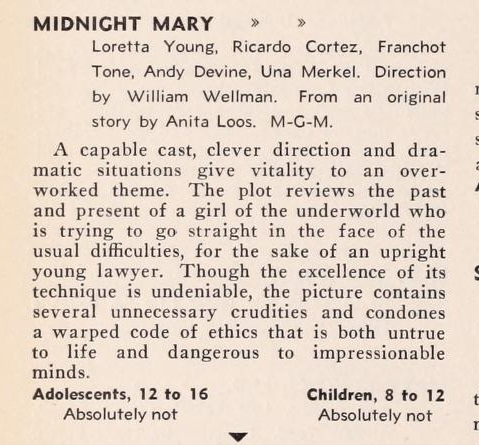