“This country is rotten with gold and with cotton. But men are forgotten!”

Gold Diggers of 1933 is one of the quintessential pre-Code films. It’s a big, blustering comedy musical made with some of early Hollywood’s biggest stars and creative talent. It made a huge impression, both at the box office and in how it influenced other big-budget musicals from then on.

Other studios decided to cash in on the success of Gold Diggers and its predecessor 42nd Street. The most successful of these is probably 1933’s Flying Down to Rio, which RKO rightfully pushed even further into the realm of the absurd. However, Universal, not one of the major studios, decided to make something fairly derivative, taking Gold Diggers and mostly copying its high points. Hell, there are scenes that even seem almost line-for-line recreations of the famous film. 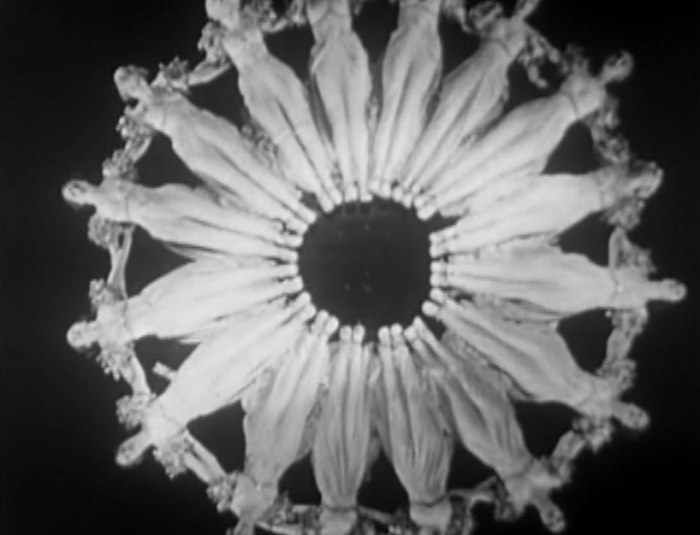 This is my favorite part of Footlight Par— I mean, Moonlight and Pretzels.

The biggest difference between the two is the focus– while Gold Diggers is portraying the titular diggers in the form of the titular Joan Blondell, Moonlight and Pretzels treats its female characters as mostly secondary to the plot who instead must wait around to be wooed by busy men with very important things to do. It’s a subtle difference, but a noticeable one.

While Moonlight and Pretzels definitely suffers in the comparison, it has a few undeniable charms that make it an enjoyable experience. It’s the story of a big-talking vaudeville singer named Dwight who winds up making it big as a songwriter on Broadway and the small town music shop owner who falls hard for him. Dwight wants to separate himself from a pair of greedy producers and open his own show on his own terms, but keeps finding himself undermined by his partners. Will his musical triumph open? And will he stop fussing about the show long enough to romance the woman he so clearly loves?

There’s a bit more to it than that, including the show’s leading lady Elsie (Lillian Miles) and her gambler lover Nick (Leo Carrillo) who can’t resist a good bet. Despite the fact that they’re the secondary romantic couple, they actually end up handling most of the film’s charm. Nick in particular has a wonderful puppy dog quality that’s hard not to enjoy. Also notable is William Frawley who two decades on would end up playing Fred Mertz on “I Love Lucy”– and he looks about the same age here as well!

Unlike Berkeley’s musicals, which usually stack the big numbers for the finale, Moonlight and Pretzels spreads the songs out. Most are forgettable, with one– “I’ve Got to Get Up and Go To Work”– being a rather painful bout of talk-singing, only notable for being another situation where nude women in silhouette get to shower, bathe, and show off for the camera. Of course, that’s another nod to Gold Diggers of 1933, but if I started counting them one by one, I don’t think this review would actually end. 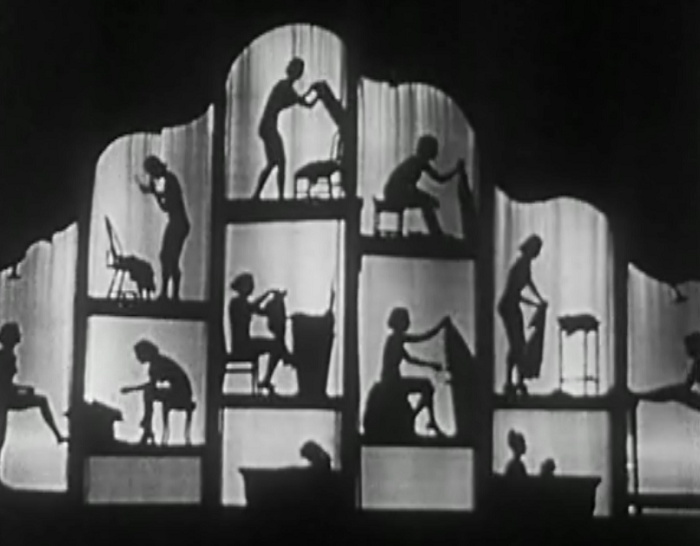 One of the standout numbers is Lillian Miles’ song “Are You Making Any Money?”, a solo performance that signals her as a gold digger of the oldest variety. It’s a playful number, with many winks and smiles shared between Elsie and Nick. Miles had a short career in Hollywood and is probably best remembered for dancing The Continental in The Gay Divorcee and playing the piano in Reefer Madness (1938)– not the most distinguished career, but it has its moments.

The other notable musical number would have to be “Dusty Shoes”, even if it mostly has to rely on stock footage substituting for choreography in large chunks. The director of Moonlight and Pretzels, Karl Freund, is best remembered for directing 1932’s The Mummy. I suppose hiring him for the job made a certain amount of sense since The Mummy‘s ethereal atmosphere may have seemed the perfect fit to try and riff on Berkeley’s flights of fancy.

While Freund has a light touch in the comedy and even makes a few of the musical numbers work, you can tell is heart isn’t in the female figure in quite the same way as Berkeley. The arrangements of chorus girls in geometrical patterns looks flat and lifeless compared to Berkeley’s enthusiastic eroticism. The geometric patterns are merely reproductions without purpose.

Where he thrives is in the more expressionistic moments, such as in “Dusty Shoes” as he gets to portray The Depression as it was to that point. The song, about one man promising to his old shoes that they’ll get shined again, is exhilarating and touching. The best moment comes after the stock market crash when Elsie is placed on a black background and dozens of outstretched hands grasp for the sky. It’s stark and haunting, and the movie’s most genuinely affecting moment.

The movie was obviously made on a tight budget compared to Berkeley’s films, and its numbers never escape feeling stage bound. This is a movie intrinsically stuck in the times, for better or worse. But I can imagine audiences in 1933 walking out of the theater humming “Dusty Shoes”. It’s a peon to the experience of The Depression, from the crash to the optimism of Roosevelt’s election. For many of them, while good news wasn’t there, it had to be around the corner. It had to be, even if it was just a final kiss after the curtain falls and a nice tidy happily ever after.

The “career” of Moonlight and Pretzels is almost as enigmatic as the film itself. When it was initially released, it was popular with both exhibitors and the public, and presumably was profitable. At the time its relaxed tempo and unpretentious quality must have made it a pleasant change from the more formal giant musicals of the period. […] Exhibitors, reporting on business in The Motion Picture Herald, seemed very happy with the film. One, reporting on Footlight Parade, commented that while it was good, “it’s no Moonlight and Pretzels.” Somehow, like George Armstrong Custer, the film shifted from “good guy” to “bad guy” over the years. Although available for reissue, it was always shunned. When available for TV, it was almost always turned down as being so bad as to be almost unplayable. Admittedly, perspective gives it different and sometimes lesser values. Karl Freund was a terrific cameraman and a great director of horror movies (The Mummy, Mad Love). He was not a particularly good director of musicals, and moreover he had the temerity to attempt a Busby Berkeley-style film (even plagiarizing Berkeley’s “My Forgotten Man” number for his climax) in a small New York studio rather than in Hollywood. Pryor and Mary Brian are no Powell and Keeler, but they try hard. But surely the film should be given credit for trying to do what Berkeley did on a fraction of his budgets, and for exhibiting considerable ingenuity in the process. Moreover, it does succeed on many counts. Some of the numbers are inventive and certainly tuneful, and retain much of the Berkeley eroticism. 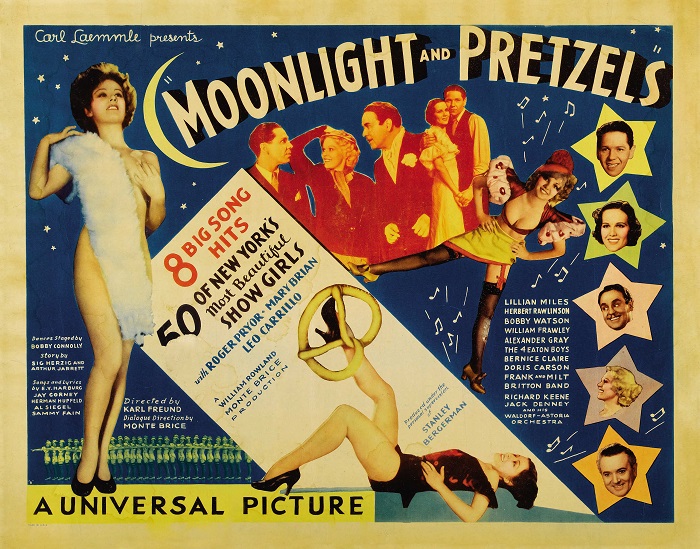 May contain cleavage that does not appear in the final film.

I thought Lillian Miles was such a revelation here that I was bound to be disappointed when went to look up all of her other work. Would love to know what happened because it seemed like an opportunity, and one that she made good on, but somehow didn’t pay off afterwards.

Ha, you ripped the song I found catchiest of the bunch! Though I can’t stop humming the title track, it’s really growing on me.

That moment of silhouettes, jeeze, I thought they ripped the clip right out of Gold Diggers!

I was entertained, big time, but most of all I left this one absolutely fascinated by the optimism of “Dusty Shoes.”

Love that you covered this one, Danny, and especially that it earned a “Like” – I’d been hoping it would ever since I saw you mention it in your monthly preview!

I’m with you on the Lillian Miles disappointment, as well as getting the title track stuck in my head. And I’m glad to hear you liked it too. Here’s hoping it gets a decent release at some point!

Enjoyed this – it sounds well worth seeing. And thanks for the clip!

Sure! Hope you can track it down, Judy, it’s a rare one!