The Pajama Party: Or Less

Watch enough Todd and Pitts short films and a pattern emerges. At some point, Zasu Pitts will be forcibly addressed. Men will literally chase after Thelma Todd. Zasu’s romantic flirtations will never end well. And don’t put Thelma Todd behind the wheel of a car. (A tip that perhaps should have been heeded in real life as well.)

“The Pajama Party” has all of these, though it doesn’t get to put them to any exemplary use. This one sees Todd and Pitts dating a pair of band members who want to meet up with them after a gig. This goes awry when Thelma is run off the road by dizzy heiress Mrs. Van Dyke (Elizabeth Baroness) and straight into a lake. She takes the women in and has them bathed and cleaned up and invites them to a party she’s holding that night for her husband’s birthday. 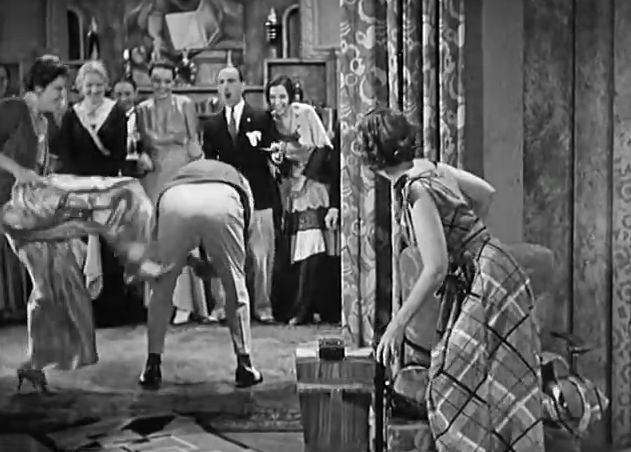 Lifestyle choices of the rich and famous.

Things don’t go well, unsurprisingly, as Van Dyke’s home is a cavalcade of excess and weirdness. Besides having a butler for every couch and French maids who can’t speak a lick of English, her immaculate art deco palace plays host to a gala of the rich and powerful whose idea of fun is taking turns kicking a man in the rear end as a birthday celebration and jauntily dancing from one room to another.

Zasu is instructed by Thelma to imitate the loopy guests while Thelma is busy being pursued by the husbands of the group. Thelma keeps getting invited to explore the pagoda with the men, which results in a black eye for each. Tensions escalate and soon many of Van Dyke’s guests are getting kicked in the rear by a smiling Zasu. “And one to grow on!” she explains. 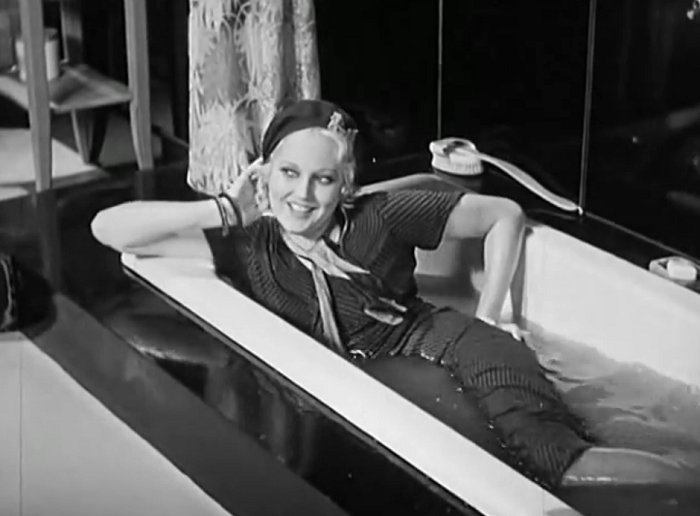 Not the Thelma Todd bathing scene we wanted, but probably the one we deserve.

“Pajama Party” has a couple of amusing moments, but a lot of time is spent relying on Zasu’s slow burn. Thelma gets a couple of nice moments (her Pig Latin is flawless, for the record), but there’s just not enough to the short. The party is the definition of the debauched rich acting like spoiled children, but where’s the deflation of them? Todd and Pitts just don’t do enough here– they’re all reactive, not enough active. I think if the short had ended with Todd kicking Van Dyke into the pool rather than Pitts, it would have worked better– and said something to boot.

Thanks for all the great shorts.I’ve shared with friends and family.
Love your site

Thanks! Lots more to come. 🙂