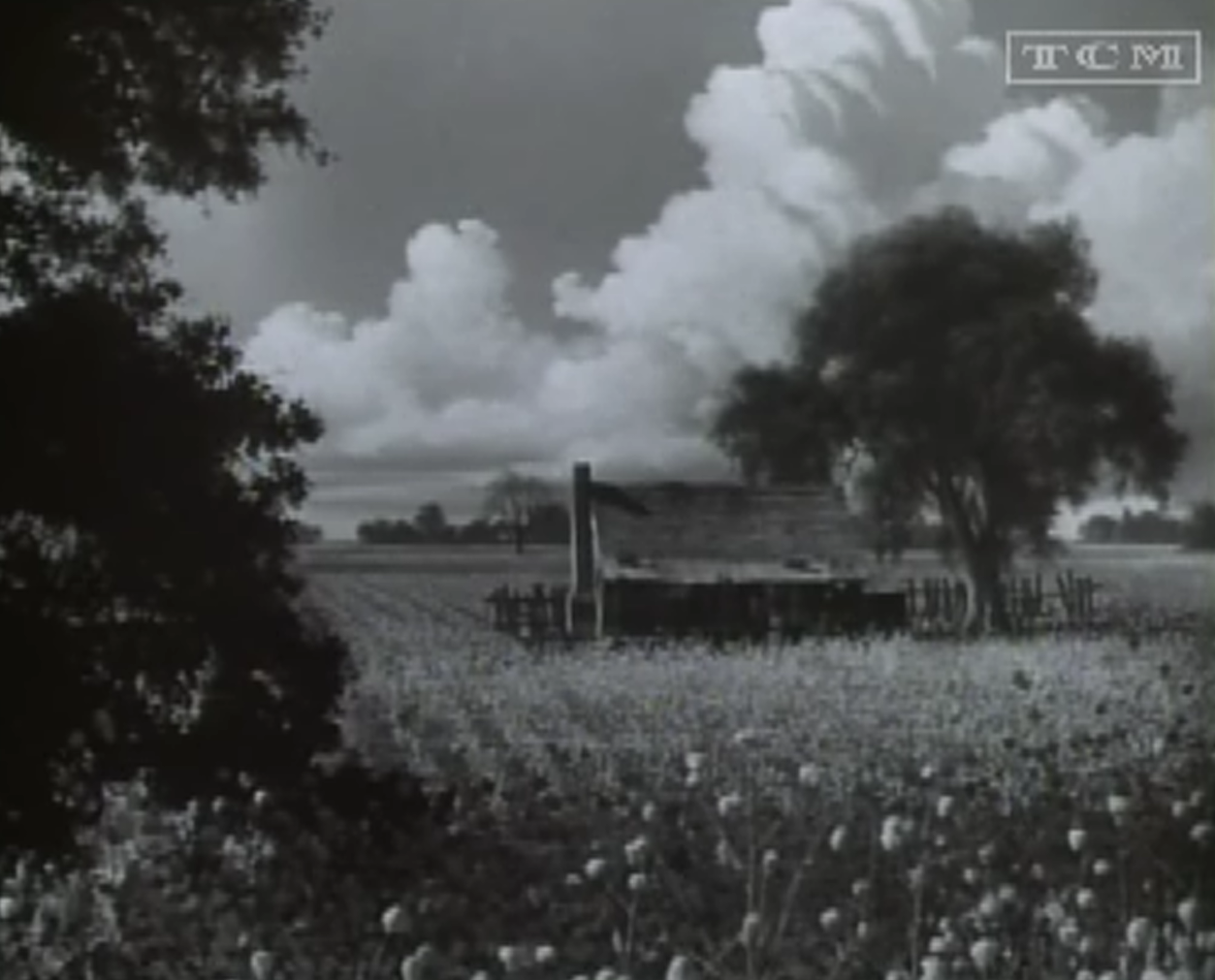 “In many parts of the South today, there exists an endless dispute between the rich land-owners, known as planters, and the poor cotton pickers, known as tenants or ‘peckerwoods’. The planters supply the tenants with the simple requirements of every day life and in return, the tenants work the land year in and year out. A hundred volumes could be written on the rights and wrongs of both parties, but it is not the object of the producers of “The Cabin in the Cotton” to take sides. We are only concerned with an effort to picturize these conditions.”

There’s a crawl at the beginning of Cabin in the Cotton; usually, for this era, that’s a good sign. You’d catch similar crawls before fare like Beast of the City and Scarface, carefully worded prologues that make it very, explicitly clear that the filmmakers aren’t trying to upset anyone, especially anyone who could possibly censor the movie. Reading this and knowing it’s attached to the front of a pre-Code, you can be almost certain that the movie will, in fact, be taking sides. What’s surprising about Cabin in the Cotton, though, is that unlike a lot of other of the Warner Bros. movies that tackles social injustice, both sides are pretty detestable. It’s the system that’s broken.

Richard Barthelmess stars as Marvin Blake, a young son of Deep South sharecroppers. His father works for a plantation owner named Norwood, who keeps the entire family out in the field, even demanding Marvin quit school to spend more time working off his father’s never ending debts. Marvin’s father dies one night, though, and Norwood instead sponsor’s Marvin’s education out of guilt. Marvin graduates to become Norwood’s bookkeeper, overseeing his sprawling plantations and financial empire.

Marvin is a smart guy with a problem– no one likes it when he thinks. His relations see him as a traitor and demand he use his financial prowess to help them steal money and cotton from Norwood. Norwood, on the other hand, wants Marvin’s help in cooking the books, promising the boy a bright future. He even says as much:

“Look here, Marvin. After all, you’re getting up out of the poor white class. You finished school, you’re a good bookkeeper. You’re a sort of right hand man to me now. And Betty is a sweet little… well, tenant girl, I know. But you don’t want to get tangled up with her. Not if you’re going anywhere in this world. You’re sort of on the planter’s side now, and we’re the people who keep the country going. Well, you know what I mean.”

But, of course, things aren’t that easy for Marvin. He’s torn between both worlds, the one he grew up in and the appealing, carefree world that Norwood flows in. Each side is tempting, but also despicable. The sharecroppers plot to trick Marvin into being complicit in crime. Norwood wants him as a spy against his family and friends.

Both sides are are also represented by a persuasive member of the opposite sex. Marvin has known Betty since they were children and they’d made big eyes at one another. Madge, Norwood’s daughter, is a carefree spirit who happily tempts Marvin and any other men who tickles her fancy.

The sharecroppers languish outside the Norwood’s mansion and leer. The Norwoods insist their fancy guests participate in a dance called “The Peckerwood Wiggle”, where they mock the simple customs of their employers. As things escalate, each side takes turns threatening and charming Marvin, eager to get him on their side as a tool against the other. The insults and retributions grow, with one land-owner being killed and his tenant killer being lynched in retaliation. Then Norwood’s store is burned down. Marvin is the only person who knows where an extra set of Norwood’s financial books lay, and its up to him to finally decide how to fix the system before he’s destroyed by it.

There are plenty of reviews that rag on the film out there for lacking the one sided righteousness that other Warner Bros. movies of the time trafficked in. This is no I am a Fugitive, Mayor of Hell or Heroes for Sale by any means. Some have even gone so far as to call the Norwoods ‘endearing’, preferring them to the sharecroppers who leer, cheat and steal. Of course, this is a trick of the film’s: much like in real life, crimes of the poor are spread as proof of their inferiority, while the crimes of the rich are guffawed about behind closed doors.

Marvin is reserved and cautious throughout most of the film, a marked change from the usually intense Barthelmess. He’s clearly caught in two worlds, pensive and anxious about both. He is constantly searching for the middle ground between both sides’ greed, and, in the end, manages to find it by using his own criminal acts to showdown with Norwood and force compromise.

Norwood was the villain the whole time– his only act of kindness in the whole film is showing pity on Marvin when his father dies– but his kindness only extends to those who he deems worthy and in figuring a way that will benefit himself. The people beneath Norwood give him plenty of reason to treat them as detritus, and he seizes upon that. If everyone else is inferior, surely he’s superior, right? Madge’s reasons are even less thought out, as she often runs into her dad’s General Store and takes freely the items the other farmers must beg from Marvin for. Simply questioning her own carefree life of pleasure would suddenly be the most unconscionable thing in it.

So it’s not the strongest of the Warners pre-Code social melodramas, even if it gives Bette Davis her first chance to be a bitch on camera and Berton Churchill knocks it out of the park. Marvin’s motivations are simply too quiet for a modern audience, as he glides through the conflicts subjecting himself to as little risk as he can manage in a proto-The Conformist sort of way. There’s also Dorothy Jordan’s Betty, who is just wallpaper to the plot and a complete dud compared to Davis’ electricity. The climax, too, is less of a siren call about the inequality of the two sides and instead an unsatisfying mix of bureaucracy and muddled showboating.

But the nuances are there. Director Michael Curtiz languishes in the atmosphere of the deep South, imbuing it as a culture of conflict. Tensions are constantly simmering as everyone talks of honor but never respect. Curtiz carefully inserts stock footage of hundreds of black migrants doing much of the same unseemly labor as our white principles, leaving little to the imagination that what’s going on on-screen isn’t only the experience of one race, but a massive rigged system that only a complete restart had any hope of overcoming.

Cabin in the Cotton remains one of the most interesting pre-Code melodramas from Warners as it seeks not to assign simple blame, but to deliver a message that the problems were more than one man on one plantation. They were endemic to a massive, horrifying world that was slavery in everything but name.

Bette Davis had begun her film career the previous year at Universal, but after a few pallid roles, the studio had dropped her. Warner Brothers offered her a contract, but at first she fared no better there, still playing colorless ingenues. Then Warner’s production chief Darryl Zanuck cast her as Madge, over the objections of director Michael Curtiz. The volatile Hungarian-born Curtiz was known to have a sharp eye for new talent, but that instinct failed him when he encountered Davis. As she seduced Barthelmess on-camera, Davis could hear Curtiz muttering behind the camera, “God-damned-nothing-no-good-sexless-son-of-a-bitch!” On her close-ups, Curtiz made her play her love scenes to the camera, without Barthelmess to react to her lovemaking.