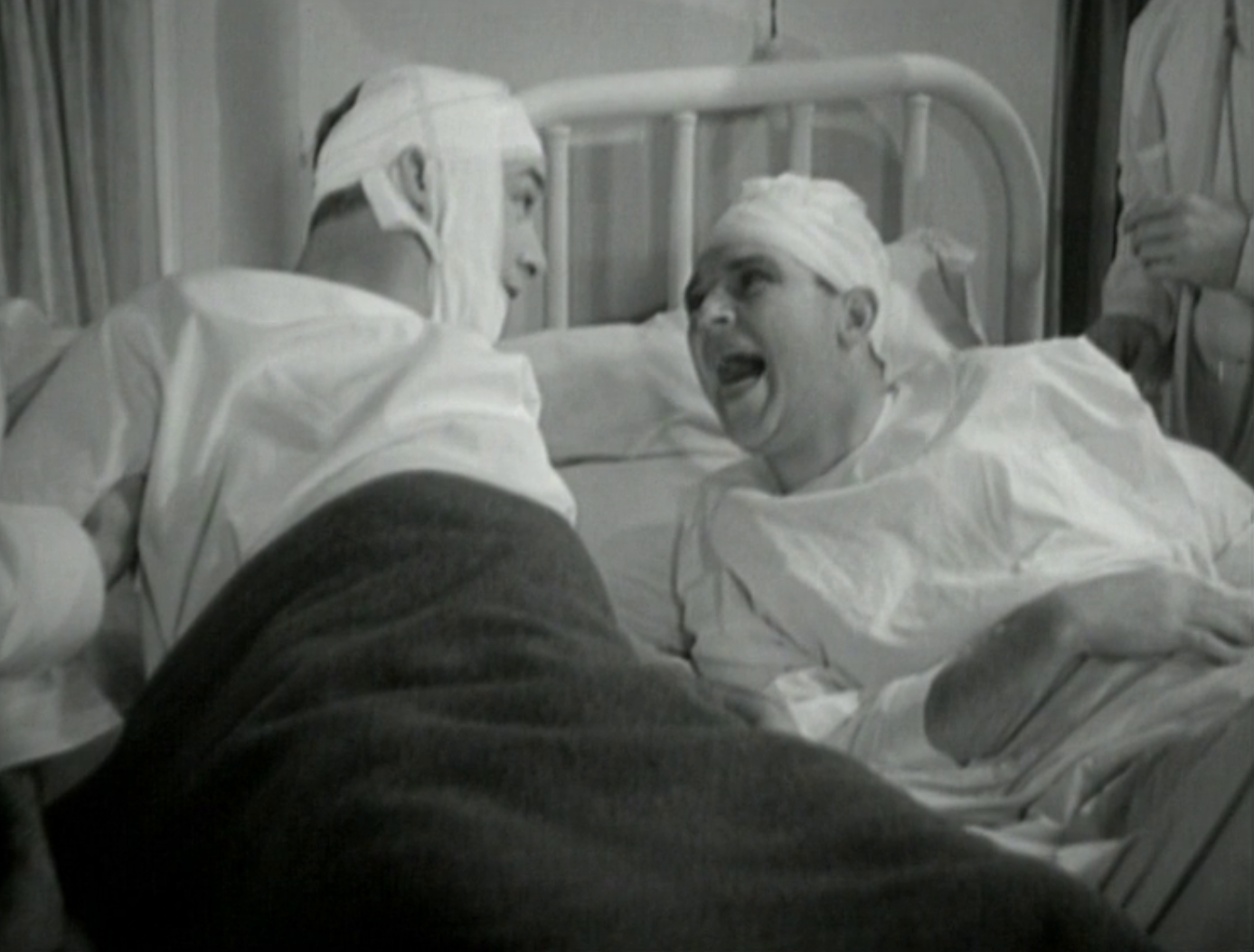 “You can’t put in the movies what really goes on in this town.”

I’ll be honest. I don’t often think about how easy it is to lure ambulance drivers to their deaths. But it is easy!

Emergency Call is a unique little thrill ride from RKO which does involve, yes, people being lured to their deaths, knives getting stuck in the back, hospital patients being murdered on the operating table, and plenty of other grim stuff. That it’s also a buddy comedy makes it seem remarkably modern– did Shane Black write this? It’s not set during Christmas, so probably not. 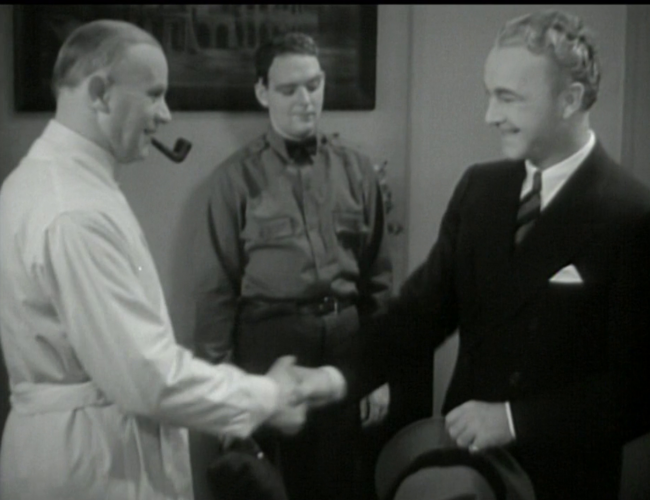 Joe (Boyd) is the golden boy of the city hospital, a promising surgical student eager to do his job and make his way in the world. Steve (Gargan) is the down-to-earth ambulance driver whose main hobbies involve leering at Nurse Mabel (Gibson) and taking the piss out of everything in his path. Steve is pretty annoyed about having to take care of green Boyd until their first call together leaves the two of them in a fistfight with an insane killer. They bond as they recover in the ward.

They soon become inseparable, but Steve’s attitude gets them into trouble. A guy who professionally fakes being hit by cars named Miller (George E. Stone) makes the mistake of grabbing Mabel, and Steve tosses him out, putting Steve and Joe on the bad side of the local mob. But it also makes the mob aware of the hospital– as a moneymaking opportunity. Blackmailing the administrator, the lead gangster, Tom Rourke (Edwin Maxwell) soon has the institution crawling with disingenuous lawyers and stacked full of expired– and deadly– drugs. 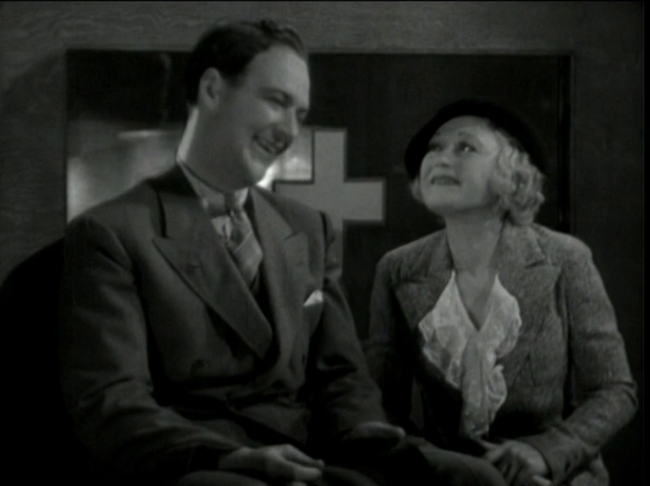 The buddy comedy aspect that permeates the first 2/3rds of the film is a real antecedent to modern pairings, right down to William Gargan teasing the more cultured Boyd with a stream of “sweetheart”s. (And, yes, the homosexual subtext that a lot of modern buddy films have certainly seems in the shadows here, too.) The two have great rapport, which plays well into the film’s climactic confrontations.

One thought kept occurring to me throughout Emergency Call: how are the action scenes in pre-Code RKO movies so consistently good? I’m tempted to blame producer Merian C. Cooper, but don’t know enough to say for sure. Here we have one scene where gangsters keep joining in on a fray against the doctor in a freight elevator, each eager combatant moving it up and and down with a switch to be able to leap into the battle. Even without the more finely tuned modern choreography, the fight here feels like a whirlwind, the punches connecting and the action jarringly visceral. 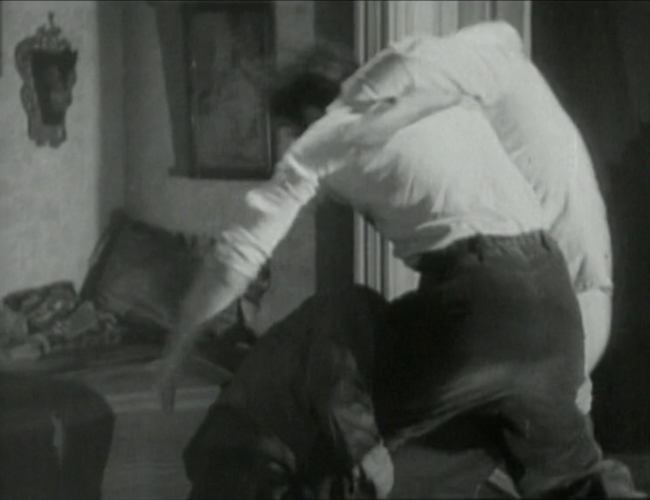 The movie is a lot of fun into the last act, where its dark themes spill out into some slow motion tragedy. Emergency Call wears its guts on its arm, unafraid to be emotional or to showcase some really nasty instances of human nature. It’s nice that the gangster heavy is just as smart as the men he’s fighting against (“It’s common sense that when you have to pick between your own neck and someone else’s, you always pick your own.”), and the finale features some truly grim moments in an operating room that are just— ahhhhhh. Not something to reflect on next time you’re getting work done, that’s for sure.

William Boyd is one of those actors that’s so handsome, I immediately assumed he must have died right after making this film. Otherwise, how the hell had I never heard of him? It turns out I’m just bad at movie history (shock)– Boyd played Hopalong Cassidy starting in 1935 for some 20 years, ~70 films, and even had a TV show to cap things off. But, man, he could have killed in some bigger ticket parts along these lines. William Gargan is always fun as a loudmouth, and he’s paired well with Wynne Gibson. (The two had also had a relationship in RKO’s also-fun Aggie Appleby: Maker of Men; personal favorite Betty Furness, who has a brief role here as Joe’s fiance, gets more of a workout in that one.) 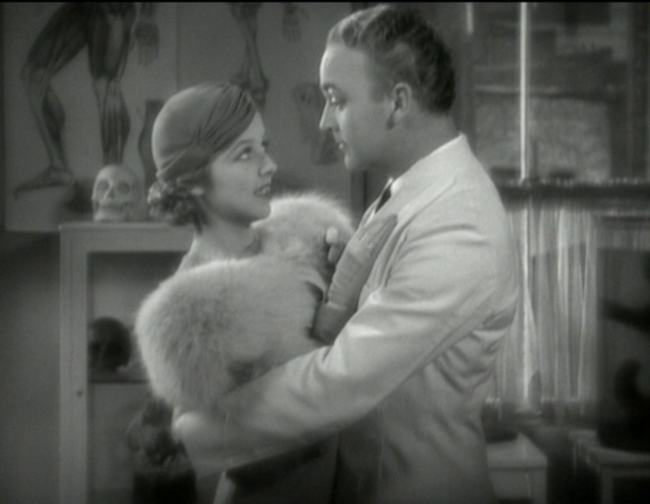 Emergency Call is another one of those blazingly competent and fun RKO pictures that gets overlooked. Maybe it’s because so much of pre-Code RKO seems connected to Selznick; maybe it’s just because some of the movies are so damn rare. Either way, this is a hell of a lot of fun and deserves to be better known.

The routine labors of the ambulance men, their hard-boiled humor, the wild midnight dash to the scene of accidents, the screaming sirens and the perpetual feeling of surprise and adventure, provide the material for hustling melodrama. But it is an unhappy fact about “Emergency Call” that the later scenes are a succession of operating room tableaux filled with ether cones, surgical instruments and other non-exhilarating properties. Opening with spirit and speed, the film slows down to a walk at the end.

Minor programmer cowritten by Joseph L. Mankiewicz does have a certain cheesy appeal.