“The kind you can take home for dinner and no hard feelings if you don’t ask her to stay for breakfast.”

“Heh. And no hard feelings if you do?”

“There’s a kick in fighting for a man’s life. There’s mystery! There’s intrigue! I like the troubles of bootleggers, chorus girls and headwaiters. They’re human! They’re alive!”

After a month of Warner Brothers flicks as I made my way through Cagney’s filmography, it’s kind of fun to revisit MGM’s take on the gangster film and marvel at how two studios could approach similar material with such divergent styles. MGM gangsters, though still happy to murder and reek havoc, are more the type to wear white gloves. When someone needs to die, they don’t necessarily go for a ride (though that’s a possibility)– a carefully plotted revenge can also be found in the cards.

High powered lawyer Jackson Durant (Baxter) has just finished defending one of those mobsters, the slow-witted but sweet hearted Gazotti (Pendleton). Durant only did it because he knew Gazotti was innocent of the crime– and Durant gets a thrill from defending people in seemingly impossible cases. The innocent verdict on Gazotti puts the lawyer on the outs with his social groups and kicked out of his law firm, though. Worse: his fiancee, Sue (Sleeper), splits with him because of this, shacking up instead with Tom (Phillips Holmes).

Tom uses Sue’s romantic longings to split with former call girl Mimi (Clarke). And Mimi, in a circular fashion, used to shack up with Gazotti’s rival gangster boss, Crelliman (Gordon). Tom and Mimi’s split isn’t amicable, and Mimi decides to go back to Crelliman in hopes of inciting jealousy. But at the gangster’s place is a wild party, and Crelliman arranges for Tom to to come by. Mimi and Tom head onto the balcony and a gunshot rings out.

Durant agrees to take the case in which Tom is all but guaranteed a guilty verdict. Durant’s only hope may be in Mimi’s friend and fellow escort Gertie (Loy). Of course, it’s Myrna Loy, so fireworks may indeed fly there as well.

Penthouse is a fun mix of the classy and criminal. Though the film is slow to start, with a great deal of setup (did you see how many characters I just listed?!), it picks up quickly once Loy sashays down the staircase and into frame. Drawing on her success in Love Me Tonight, she’s again a smart woman with a dirty mind worrying about how little Durant seems to be focused on sneaking into her bedroom.

Comparisons to The Thin Man, released less than a year after the picture, featuring a similarly-socially minded MGM version of New York as well as Loy and director W.S. Van Dyke, are impossible to avoid. While both movies view the urban landscape in varying shades of grey, the tone of Penthouse is more towards a thriller than a detective yarn– who did the crime was never really in doubt, we’re just enjoying the ride as Durant unravels it.

Speaking of Durant, The Thin Man comparison allows us to really see the positives and negatives of Warner Baxter. While he’s certainly not as debonair as William Powell (as no one could be), nor is he as wryly playful, Baxter brings a certain amount of maturity to the role, a weight that Powell may have lacked. The anger and sadness he portrays in the movie as he’s betrayed by those he’s loved and the final show he puts on to get the truth out of the killer have a brutal heaviness behind them. Baxter has a reserve of menace that Powell would seem to lack, and that serves him well in the far more dramatic tale of Penthouse.

Durant’s character arc is interesting in that regard. The point seems to be that one should pursue what makes you happy. Compromise confronts Durant at every opportunity: give up your passion to please your friends, your lover, and your co-workers. But that way also goes death by boredom. It’s better to find the people who understand you, even if they’re morally suspect. It’s a nicely Depression-tinged reality– your friends aren’t defined by money or ability, but by who genuinely love and trust you. Amoral, yes, but a more gentle understanding about the nature of the world.

The acting is fine all around, with lots of great supporting bits. Pendleton’s Gazotti is a playful brute who only loses his temper once in the movie– when a puzzle he’s working on doesn’t go his way. Some have called his best role, and its pretty high up there with Sing and Like It for sure. C. Henry Gordon’s nasty gangster is fun to watch, too, since he plays him as such a sniveling mastermind that it’s great when he loses his cool with Durant, almost ready to shoot him in cold blood after he becomes unsettled. Charles Butterworth gets some good, fun screentime as Durant’s hapless butler. Phillips Holmes is appropriately dreamy looking, and Mae Clarke is lovely as usual– too bad, as usual as well, that she doesn’t make it past the first reel.

Penthouse is kind of flimsy, but gets by on the charms of its cast. It’s a special kind of movie for the pre-Code lover, a sprightly, classy flick with just enough sin to keep things fun.

According to an August 1933 Hollywood Reporter news item, Ayn Rand worked on the film’s screenplay. The exact nature of her contribution, if any, has not been determined.

“Penthouse,” the current film at the Capitol, is by no means lacking in a certain brand of excitement. It is a picture which tells a somewhat incredible yarn, but, at the same time, one which does not pretend to be concerned about teaching any moral. A gangster’s life may not be precisely an unhappy one, but he never knows when he may be a target for a rival’s bullet.

This was the first pairing of Myrna Loy and director Woody Van Dyke who would go on to work together in many of “The Thin Man” movies as well as other films, at least eight films in total. Confident actors were at their best on the first take, Van Dyke quickly earned the nickname, “One Take Woody.” According to Loy, Van Dyke had the ability to edit the film in his head and subsequently shot minimal footage leaving little on the cutting room floor. Like actor Lee Marvin, Van Dyke was an ex-marine and both men had the ability to drink in excess late into the night and come to work the next day functioning at one hundred percent. 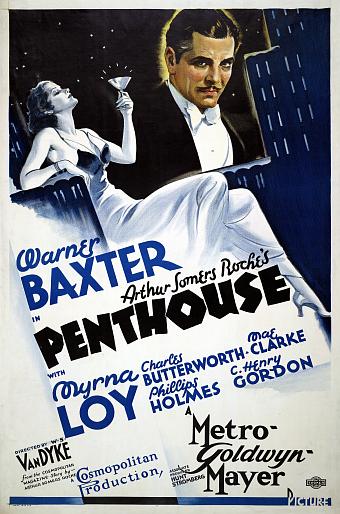 According to Loy, in her autobiography Being and Becoming written with James Kotsilibas-Davis, it was on Penthouse that Van Dyke declared “This girl’s going to be a big star!” (83). Van Dyke would work next with Loy in The Prizefighter and the Lady (1933) before Manhattan Melodrama (1934) would introduce the final key component, William Powell, to the, pardon me, perfectly blended mix.

8 Replies to “Penthouse (1933) Review, with Warner Baxter and Myrna Loy”