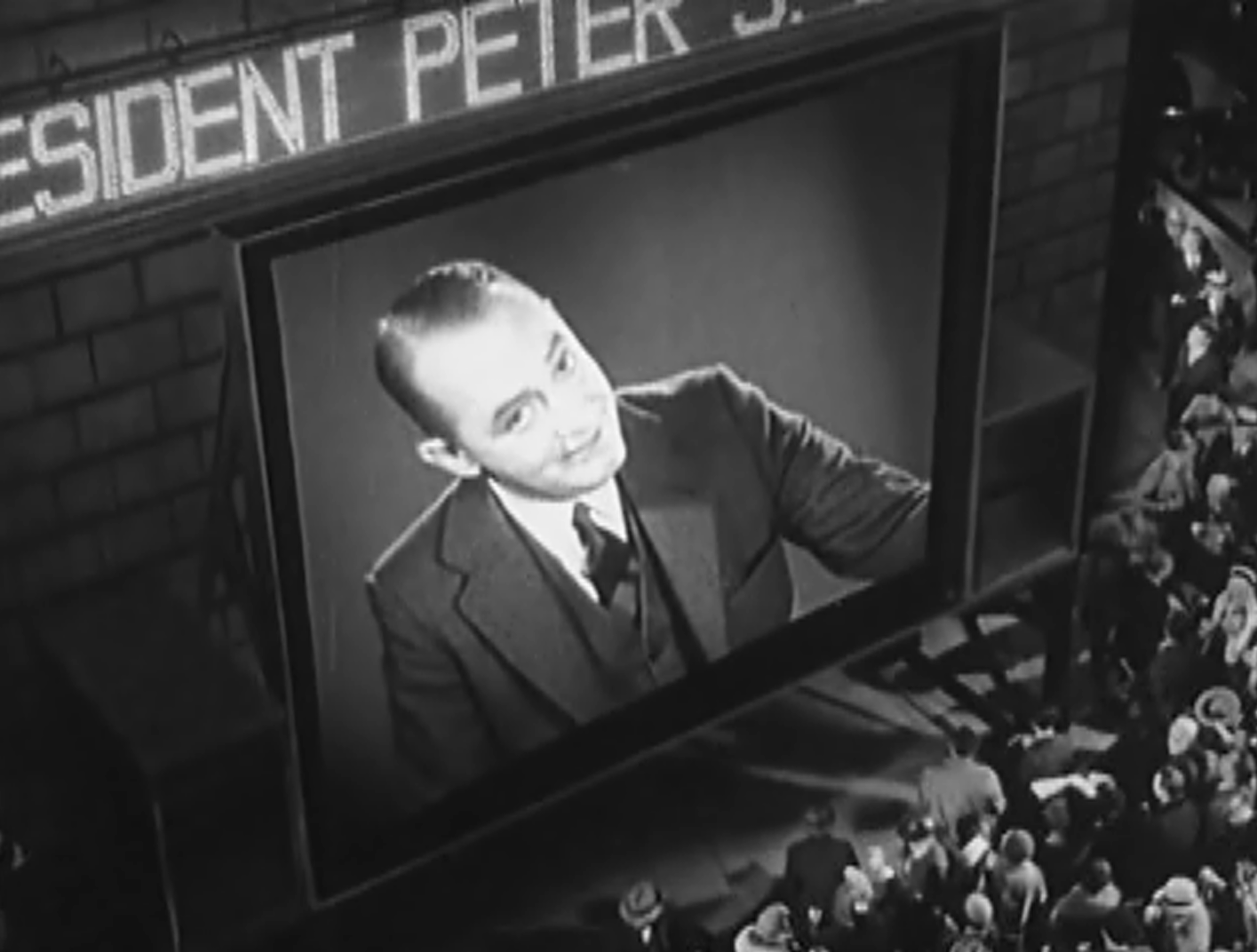 “A little a chivalry is all right, but a little Chevalier wouldn’t hurt.”

This election is almost over. I know that line is probably out of place a week from now when it’s dead and gone, but 2016 has been a slog of awfulness, and I’m not entirely sure the actual event of the election will settle it. I want this year to be over. Adding to my troubles is that I watched this pile of shit and now I have to write about it.

T.K. Blair is an uptight jerk who wants to run for the Oval Office, but has a personality problem– he hasn’t got one. He can’t even get lovely former President’s daughter, Felicia, to stop washing her dog for long enough to properly propose. In comes medicine man Doc Varny, a lively soul who sells garbage to yokels and knows how to work the crowd. The cabal behind Blair sees the perfect solution– Varny does the campaigning, and Blair does the job after the election is over. What could go wrong?

It’s a partial musical with randomly rhyming dialogue and a few full blown numbers. There’s one where stock footage of birds and bees serenade a pair of lovers (seriously). Another sees a political convention turn into a complete hoedown, including the Arizona delegation dressed as cowboys and the West Virginians as coal miners among others. And, of course, we have Cohan belting out a tune in blackface, because it worked for Jolson, why not give it another go.

The subtext of the film is socially conservative to a fault. The group backing Blair is a cadre of stereotypes. Those nasty butch women, gays, and foreigners are conspiring to put a humorless know-nothing banker to the presidency. A banker! The only solution the film sees is by ways of a conman who understands the real America. Back then this involved playing baseball with kids, singing songs about patriotism and doing a quick two step– it’s not quite name calling on Twitter, but thank god for technology. When the conman blows the lid on the charade, he’s elected anyway– at least he’s an honest conman, amirite? An honest conman with no plans, no ability, and no clue. Wonderful.

Jimmy Durante (or, as I usually think of Durante, “goddammit, it’s HIM again”) is at peak Durante here, tossing of malaprops and hurling the kitchen sink at the screen as he plays the Doc’s ‘wacky’ partner. At least in his many teamings with Buster Keaton, at least you felt bad for Keaton. That supplanted some of the rage and disappointment. Here Cohan lays on the smarm as well, either not believing in the material or knowing he’s too good for it, leaving a screen presence of irritation at the audience to supplement perfectly Durante’s empty-headed desperation.

Claudette Colbert is given material to work with that I’d hesitate to call her worst, but I cant think of much that’s worth recommending for anyone in the entire film beyond a few of her gowns. People who know and love Yankee Doodle Dandy, the James Cagney ode to patriotism from 1942 that’s loosely (loosely) based on Cohan, may want to see what the real Broadway virtuoso looks and sounds like. Their fertile imaginations would be undeniably more satisfying.

Cohan could not resist the lure of performing. In 1933, he overlooked his instinctive distrust of Hollywood just long enough to star in his only musical film. The Phantom President (1933) was the story of a small time song and dance man who agrees to campaign in place of a lackluster presidential candidate he bears a twin-like resemblance to. Cohan played both roles, using spilt screen technology in several scenes. Despite a score by Richard Rodgers and Lorenz Hart and the best efforts of co-stars Claudette Colbert and Jimmy Durante, The Phantom President was a weak vehicle, but it offers a precious glimpse of him in action. Although his nasal singing sounds harsh, his dancing was still slick, and we can experience something of the personality and physical grace that made him such an audience favorite.

Mr. Cohan handles the dual role most competently. He is serious and conservative as Blair and vigorous, witty and sympathetic as Varney. The redoubtable Curly Cooney is baffled by the likeness of the two men; in fact, he believes them to be one and the same. He does his share to win the election for Ronkton’s candidate with his hoarse voice, his enthusiasm and buffoonery. […] And, so far as Mr. Durante is concerned, nobody could help laughing at his doings and sayings as Curly Cooney.