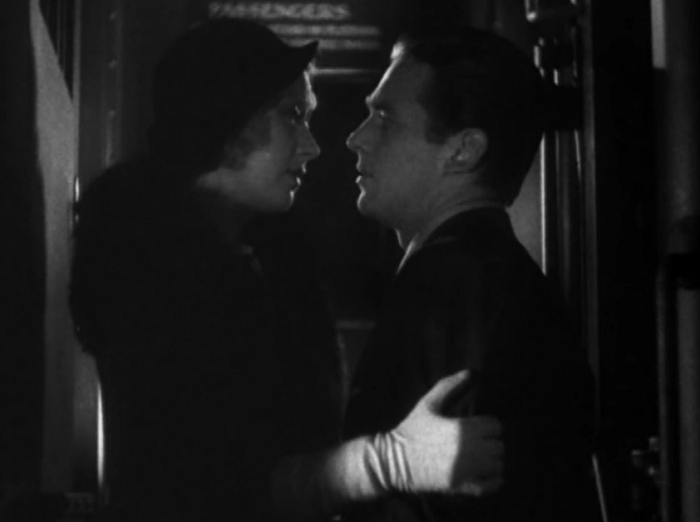 Union Depot: The Crossroads of Life

“I tried to sell her on the idea of me being a gentleman.”

It’s pretty safe to say that the primary means of transportation have shifted in this country over the last 80 years. Where once cruise ships, buses and trains carried people across the globe, the faster, cheaper airplane has stepped in to grab much of the traffic. Trains in particular have lost nearly all of their luster. It doesn’t help that they’re a slow mode of transport– if you want to get from Los Angeles to New York, expect to spend 64 hours and $1,500 if you want a sleeper. Considering it costs me less than that to hit Hawaii for a few nights, I may pass.

But that wasn’t always so, as you can surmise. The train station of the 1930s was a hub for people of every social strata as they make their way across the country, either towards fortunes or away from troubles. From vagrants and criminals to the rich and famous to the black, white, and Asian, anyone could cross paths at the local depot.

Warner’s Union Depot uses this setup to recreate a microcosm of Depression Era America. And since it’s a Warners picture, you get to look at it from the bottom up. Our main character is a ‘forgotten man’ named Chick, a hobo who travels across the country by rail looking for work and getting in and out of jams. Union Depot is the story how one night by luck, good and bad, everything gets flipped upside down, switching him from pauper to prince.

Chick travels the country with his friend Scrap Iron. The two just got out of another jail term for vagrancy (as hard it is to believe, America may have a raging boner for putting poor people behind bars) and have decided that their best chance to avoid another dinner of hobo beans is for Chick to borrow an information clerk’s uniform and see if it packs any privileges. Before he gets a chance to find out, he accidentally returns it to its rightful owner. However, Chick’s life is charmed when another passenger leaves a bag behind, giving him a fresh suit, a wad of dollar bills, and a shaving kit to make him look a bit presentable. Not that Douglas Fairbanks looks bad with a bit of stubble, but, hey, couldn’t hurt.

After falling up the social ladder by a few degrees, the first thing he does is seek out dinner. The second is female companionship. He finds a lonely looking Ruth starring off into the distance, and mistaking her big eyes for something else, invites her across the street for a private meal. Only it’s not a restaurant they attend, but a private dining room with a fainting couch. Here’s where he finds out she’s not a prostitute, and slaps her across the face, chiding her for her deception and asking her what would have happened if he was one of those guys who wouldn’t have stopped. So in case you ever wondered, yeah, date rape was totally a thing in the 30s.

But Chick ain’t a guy like that, and with a wad of cash in his pocket, promises to help Ruth out of her jam. She needs $64.50 to make it to Salt Lake City and rejoin her traveling troupe as a chorus girl, and Chick supplies it. But there are two complications to the situation: Dr. Bernardi, an old man who wears sunglasses constantly and limps just for extra evil effect, is after Ruth for her virtue and his own perversions. (So in case you wondered, yes, ‘rape’ rape was totally a thing too.) Then there’s also Bushy Sloan, a counterfeiter, whose money accidentally ends up in Scrap Iron’s hands. He wants it back, but not before he can sick the FBI agent Kendall on Chick rather than himself.

If this all seems a little contrived, well, yeah. A drama is still a drama by any other name. But at the core are Fairbanks and Blondell. Fairbanks has come a long way in the talkies, and perfected his ‘Clark Gable without the danger’ persona. He’s brusque, but you can tell he’s a softie from the first time we see him. Blondell, only on her second year in Hollywood but still marking this as her 16th film (right after Blonde Crazy), is both sensitive and sweet. Her big eyes get to work overtime as she struggles to overcome her frustration as missteps plague her attempts to get to Salt Lake City; her vocal chords get a workout, too.

Fairbanks also gets a chance to play the action hero, too, much like his father so often did. The film has a lengthy battle in the train yard between Chick and Bushy after Bushy stole back his violin case of counterfeit money and shot an FBI agent. Chick gives chase, and while there is certainly a bounty of stuntmen and rear projection to behold, the finished sequence is still pretty thrilling.

Ruth and Chick, who’ve obviously fallen for each other hard, must split. Even though she’s learned he’s not the generous gentleman he pretended to be, his heart was in the right place– perhaps even righter, since he was giving up so much more to give her a shot at returning to her normal life. After one last kiss and a quick, though hollow, promise to visit her if he ever sees her troupe’s name on the marquee, we know that we are seeing the end of their affair. And, as sometimes happens in life, they will probably never see each other again.

Scrap Iron runs up next to Chick and smiles. Chick unwraps a piece of gum and offers Scrap half as the two walk away from the station, back into the reality of the hobo life and another day on the road. It’s kind of a bittersweet ending, a realization of futility but also of the sublime beauty that one improbable night can bring.

The movie carefully parallels Chick and Ruth’s stories to make them an ideal couple. Both are desperate for money and resort to immoral things in attempts to get it. Both are also on the more morally questionable side of society– Ruth, a showgirl with an injured ankle, and Chick, with so little money that vagrancy arrests is pretty much his only constant in life.

They’re also pursued by malicious avatars representing the culminations of their weaknesses and fears. Bushy is a greedy counterfeiter, the ultimate fate of Chick if he were to continue down his ‘money for nothing’ path of misbehavior. He only manages to beat Bushy not with wit, luck, or brutal strength, but just by a person vouching for Chick’s history of kindness and bravery.

Ruth, who pretends to be a prostitute for money, is pursued by Bernardi, a pervert of the highest order. He also represents the ultimate danger inherent in that pathway– sex, whether you want it or not, by cruel, vicious men. Ruth survives the encounter with him when Chick arrives to frighten him off– a clear sign that a loving, moral relationship with a man is the only thing that can save her virtue. (Hey, it’s the 1930s. You can’t always expect The Feminine Mystique.)

Union Depot is a social mobility parable, an ode to the common guy and every other person who feels left out when they go to the movies. Chick’s change of class doesn’t change him as a person. He’s generous and kind, wanting only the best for people. However, it’s not until he has cash in his pocket that he’s finally able to affect real change, saving Ruth and bringing down a major opponent of good ol’ Uncle Sam. It’s not critical of the government, per se, but of capitalism, and how it forces good men like Chick into a bad position.

It’s also a funny, vibrant story that feels startlingly alive. Director Alfred E. Green’s extraordinarily mobile camera weaves and tracks between the many stories told. It captures more than just the story of Chick and Ruth, but a perfect, Hollywood version of the Depression, with nobility, hope, and charm to spare.

Blondell’s scenes give the film a sexual edge rarely seen after censorship reared its ugly head in 1934. On the run from a sexual predator who very clearly intends to rape her, she tries to earn train fare to a promised job in Salt Lake City by coming on to Fairbanks. Audiences used to Blondell’s later work as a character actress are often surprised by the blatant sexuality of her early performances. In many ways, she was Warners’ resident hooker with a heart of gold, even when she stopped short of turning tricks, as in Union Depot. She also was one of the studio’s most generously endowed leading ladies. Her more sensual appearances were often cut by film censors and generated memos from production chief Darryl F. Zanuck about keeping her breasts covered so the studio could actually release her movies.

Union Depot is a lot of fun but it also shines a light on the problems of the Depression — namely a lack of opportunity. Everyone in this film is making their own luck (both good and bad), and since this was made in the pre-Code era it’s interesting to see how some crimes are “OK” in this context (Ruth’s amateur prostitution and Chick’s theft of the drunk’s clothes) — since the crimes get them something they genuinely need to get along — and some are not (the counterfeiting, since it just involves greed). This take on relative wrongness would change completely with the enforcement of the Production Code by Joseph Breen in July 1934.