The Warren William experiment was deemed a success, although the new name was not without its own problems. The inevitable consequence fo the last name “William” is that everyone unconsciously adds an “s” to it. […] The mistake was so prevalent during his career that it would be no exaggeration to say that roughly 25 percent of the time his name was used– in advertising, programs, press releases, reviews, even in studio memos– it was misspelled. It was so common an error, in fact that Warner Brothers literally begged Warren to allow them to change his surname to “Williams.” By that time he was quite attached to the moniker, and stubbornly refused. (p. 60)

One of the unbridled treats of pre-Code is, without a doubt, the slick eloquence of Warren William. William, a native Minnesotan, came to fame in his 30s after runs on Broadway. Despite lifelong comparisons to John Barrymore, he was never a ham, just a solid, astute actor who could play the lead or featured part with nary an ego to bruise.

Well, to a point. The portrait painted in Warren William is that his own lack of personal ego led to him being misused by Warners during his 1930s heyday, ignoring ways to help him break out and instead putting him in movies where he played supporting bits– like Dr. Monica— in spite of headlining in a string of successes. William’s career never really recovered, and though he went on to become a staple as the lead in B-movies like the Perry Mason and Lone Wolf series, his modesty had let lasting stardom slip through his fingers.

Warren’s personal life is no less fascinating than his battles in Hollywood. The book is one of the rare ones where the family’s personal history, stretching back to Indian attacks on his hometown, add character to the depth of man being featured despite happening decades before. That’s perhaps because something about William always seems so remarkably old, but that stiffness also hints that his past and moral compass is always clawing at the door. Also brilliantly covered in the book are William’s insanely fortuitous participation in World War I, his unceasing desire to invent, and just how well author Stangeland balances family strife with Warren’s longtime affair with the love his life, Helen, who kept a hell of a secret herself.

Stangeland does take a few timeouts in the book to note his dislike of a number of stars (dude, Lyle Talbot ain’t that bad), with the main target of his ire being Bette Davis. Davis, who worked with William on films like The Dark Horse and Three on a Match, has several apocryphal stories attributed to her that cast William as a lothario, which is quite unlike most other portraits. However, Stangeland is thorough in researching this and does his best to cast the stories into doubt– there’s no sources found that directly link the tales to Davis and years after they appeared together she still saw him socially on occasion. That speaks to how articulately researched the whole affair is, and how ruthlessly Stangeland pursues every avenue of William’s life to the bitter end.

Overall, Stangeland does his subject extraordinarily well, creating one of the most compelling books I’ve picked up in a long time. He spends the last section doing what a lot of the biographies of obscure actors must– debating on that person’s place in history, or lack thereof. William retains a stronger reputation than many, thanks to a number of great pre-Code roles and the still-fun mystery series that became his bread and butter in the late 30s/early 40s. And that’s compounded by the fact that he simply is great– anyone who watches one of Warren William’s films with him in a starring role can make no mistake about that. But he languishes because he never gained ego or craved celebrity, and instead stayed true to himself. In that conclusion, Stangeland has found a bit of poetry that elevates the book.

While it is sad that it’s unlikely The Mouthpiece will crack the AFI Top 100 any time soon or that William will ever be as recognized as Edward G. Robinson, Stangeland’s biography is a splendid tribute to an eccentric, dedicated actor. And it’s a damn good book. 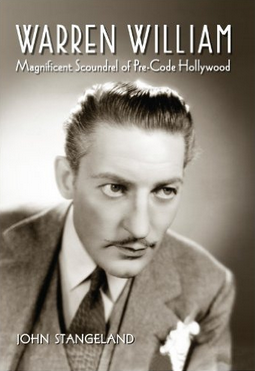