“Sweetheart, you don’t know how tired a man does get when he don’t get no lovin’.”

No one can glower quite like Richard Dix, and, boy, Hell’s Highway gives him plenty of opportunities to do that. He plays Duke Ellis, a repeat offender who is serving his time on the chain gang. Handed the cruelty of the situation– beatings, day long work, blisters, lesions, and nothing but abject misery– Duke embraces his Sisyphean lifestyle fully. He’s tough– the toughest by far– mostly getting by his square chin and that gleam in his eye.

Things are going pretty good, too, up to the night he stages an escape attempt. There he notices a new recruit sleeping on the other side of the fence– it’s his younger brother, Johnny (Brown, who played a lot of younger brothers), and he’s just been put away for a few months for taking a shot at the last guy who’d fingered Duke. Poor, dumb Johnny. Duke hightails it back into his prison bunk, his heart sinking with the realization that he has to keep his deluded and innocent brother from getting his face pounded in until the kid’s term is up. 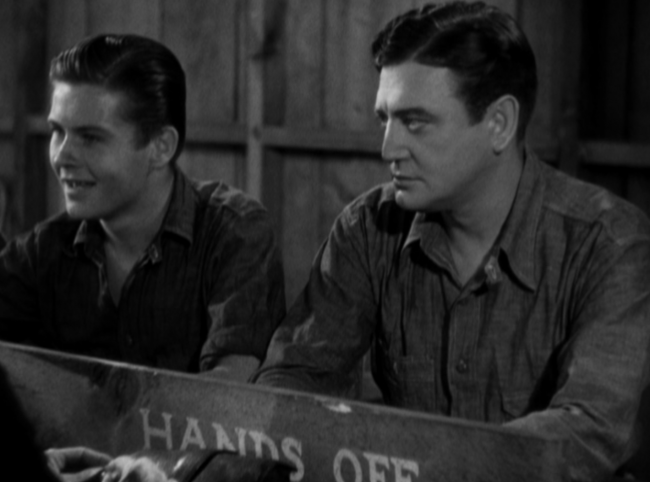 The chain gang itself is working under a private contractor who is on a tight budget and needs them to work twice as hard to keep their rates low. This leads to a number of cruel conditions, from the whippings to the “hospital”– a sweatbox where prisoners are hung up by their necks. One man dies in the sweat box, setting off an investigation that runs parallel to Johnny’s arrival. You’d think this would make the guards and foreman a little more careful, but the crunch has them more than happy to continue to push and beat the men. Seeking to save his brother from the aforementioned sweat box, Duke trades obedience for Johnny getting an office job. It makes no one happy, but Duke knows it’s the only way.

Well, there’s a murder, a jailbreak, and a man gets stabbed with a spoon sharpened into a shiv. The gang of convicts, who helpfully have targets painted on the back of their jumpsuits, soon split off as they’re hunted down. After Johnny is shot, Duke must decide what to do– save his brother’s life or escape and save himself from a new life sentence and a worse situation. 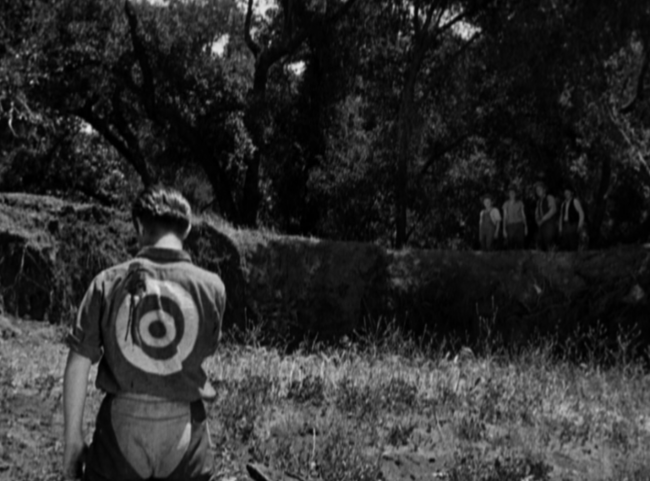 It’s not too surprising what he chooses, but that doesn’t subtract from the film. The real power here is Richard Dix as Ellis. Dix, whose jutting chin had taken Cimarron to the tops of the box office and swept the Oscars the year before, is perfectly cast. His intensity is second to none, and it’s through his tough guy act that he allows little rays of humanity to poke through. The film carefully reveals him as a veteran, and his past as a bank robber is given about as much seriousness as you’d expect in the 30s– AKA not much at all. Even when being forced into submission, there’s almost never the feeling that Duke has lost control of any of the situations, even those involving the guards and rioting prisoners. The film’s ending, which was apparently altered by the studio for being too downbeat, again reaffirms his prison life as a formality for now. He smiles at his brother, “I got away once, didn’t I?”

Inevitably compared to I Was a Fugitive From a Chain Gang, both movies were developed at the same time, with this one shortly beating Warners’ classic to the theaters. But, despite the similar subjects, the treatments are starkly different. Whereas Fugitive concerns the Kafka-esque system of government abuse, Hell’s Highway is a drama built around honor and family. By design, Hell’s Highway is more conventional, something that uses the real cruelties being exposed on a national level as window dressing to fuel the narrative. 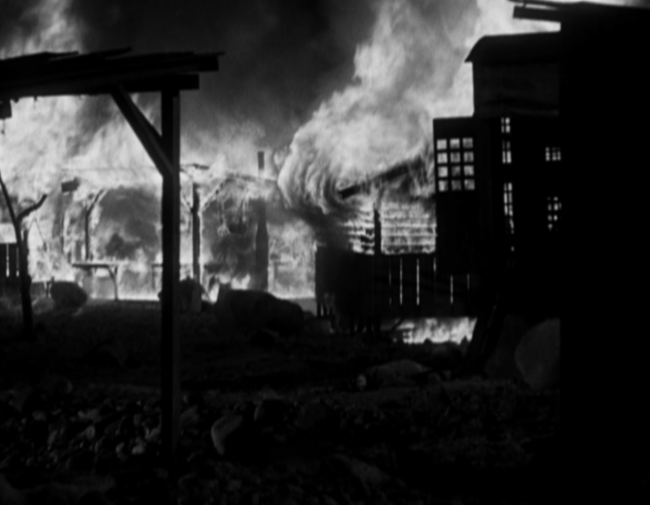 What Hell’s Highway does extraordinarily well is to contrast the humanness of its characters with their degrading situation. Many of the bit prisoner parts have some quiet reality to them, whether it’s the man who keeps a wall full of photographs from famous and beautiful women (all signed in the same handwriting) or the foreman Skinner who practices the violin at night. Save for one nasty businessman (in a Depression Era movie? why I never), everyone breathes, thinks and reasons.

The movie contrasts the innocence of Johnny and the others in the camp quite well, too. Late in the picture, when he gets shot by a posse of young boys, he staggers and shouts back, “Well, what’d you do that for?” The boys, horrified at the blood and the mild response, flee with tears in their eyes. This soft, sudden moment reveals how hard and angry the world has made everyone else back at the chain gang, and how cruelty had become the norm for them. This awfulness isn’t natural for men– it’s learned and taught through degradation and fear.

Starkly shot, Hell’s Highway is great looking. Director Rowland Brown (Blood Money) imbues everything with sweat and gravel, giving the film a rugged tone. The real villain of the movie isn’t too surprising– the way capitalists abuse labor and treat people worse than the dirt they’re shoveling. It’s just a good thing that some men, like Duke, don’t get broken down that easily. That’s definitely a trait that audiences of the 1930s could respect and even admire, despite Duke’s criminal ways. A man can endure.

The chorus, composed of 25 to 40 performers, though with the focus limited to four or five members in each Hells’ Highway and Pardon Us, is used to great effect after prophet Matthew reads the stars for one of the guards, Pop Eye (Warner Richmond).

In “Hell’s Highway,” the producers fail by being overeager to horrify audiences by depicting the cruel treatment of the chain-gang convicts, and Mr. Dix as Duke Ellis is vehement without being really effective. Occasionally Ellis preaches about the torturing of the felons, which would be all very well if it came from an upstanding character, and not, as it does, from a bank robber. Duke Ellis also has his maudlin moments, and to make matters worse there is the romance between Johnny, Duke’s brother, who is also one of the chain gang, and an immaculately clad pretty girl from his home town.

When the resulting film was screened before the RKO brass, studio executive B. B. Kahane demanded that certain “gruesome and brutal” scenes be cut from the film. Joseph I. Breen, director of the PCA, also stated he would not grant the film censorship approval without the removal of certain dialogue and situations, particularly one involving an effeminate inmate named Burgess. Even the original ending, in which Ellis is shot and killed after saving his brother, was changed prior to its theatrical release.