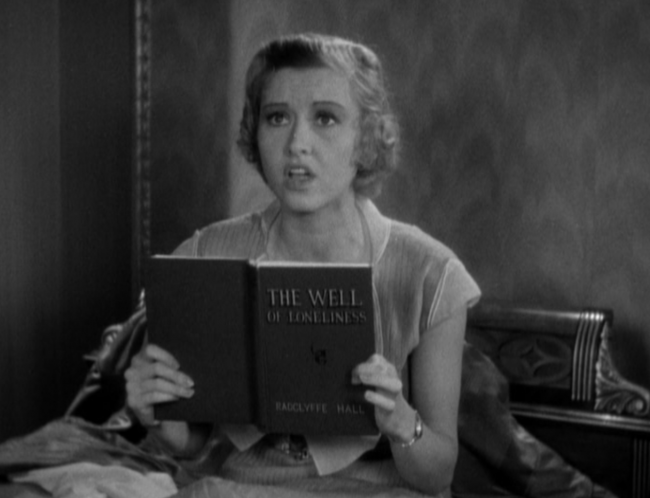 “The Dutch discovered this silly island, didn’t they? Here’s to the Dutch!”

Big City Blues is very certain about one thing. New York City is a nightmarish hellhole of greed, lust, crooks, thieves, liars, cheaters, and misery… but isn’t there something kind of charming about it, too?

Eric Linden plays a wide eyed Indiana naive named Bud heading to the big city with $1,000 in his pocket. He’s warned by the station agent that New York will chew him up and spit him out, but pays no heed. He has the hookup in the form of Cousin Gibby, what could go wrong? 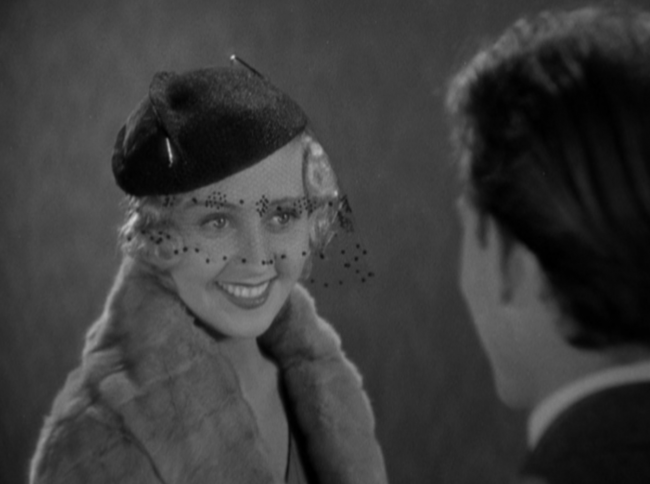 Like with every Joan Blondell movie, I ended up with a lot of pictures of her somehow.

Upon arrival, Bud reeks of ‘sucker’, and Gibby is more than happy to oblige. Gibby is a hot air machine who knows not only the hotel owner but the mayor as well, just for good measure. When he promises to introduce the kid to a couple of showgirl friends, Bud excitedly asks, “Can I meet Constance Bennett?!” She’s at the wrong studio, kid.

Bud meets Vida in the hotel lobby. Vida is a streetwise showgirl played by (who else?) Joan Blondell, going through the usual hard on the outside/nougat on the inside routine. A former small town girl herself, she melts at Bud’s blind enthusiasm. 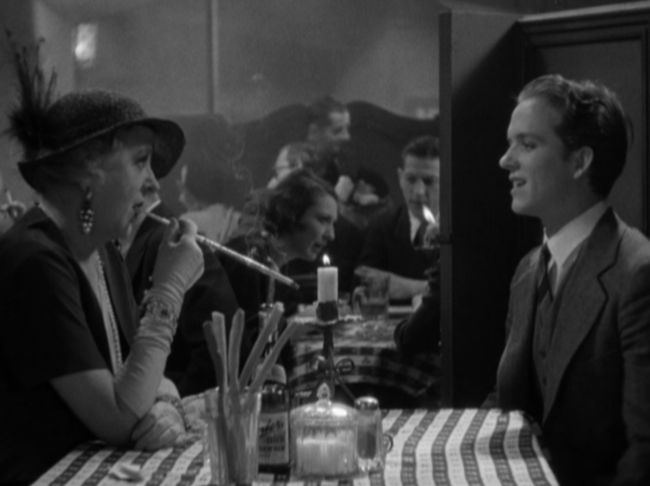 The plot of Big City Blues is a bit of a cakewalk, as a party that Bud’s been suckered into giving goes bad. A woman ends up dead and all of the attendees scatter. Bud looks for Vida desperately as he avoids the cops. They meet up in a nightclub where he becomes divorced from his money and soon enough his freedom as the police close in.

The plot is deceiving though, since much of the film’s charm comes from its dedication to showcasing New York in all of its ups and downs. The montage as Linden enters town is dizzying, with the visage of the city literally spinning as he stumbles through the streets. The presence of the city is overwhelming, and the many types of people, from all walks of life and a variety of accents, get their moments to dance across the screen while Bud stumbles by. 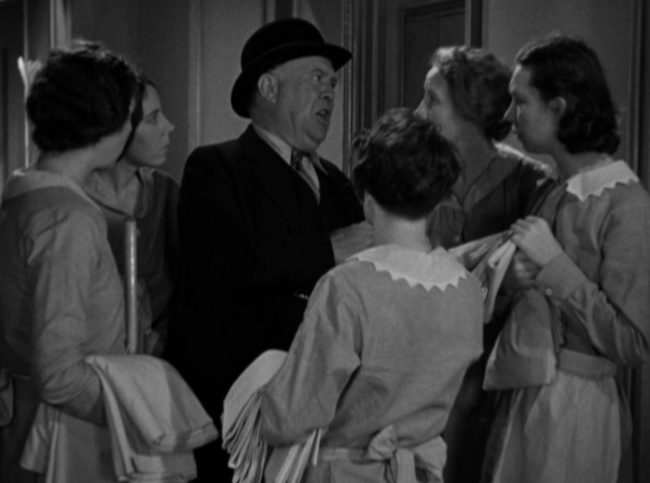 “No, Joan Blondell doesn’t kick me in the rear on this one. Don’t know how I escaped it.”

The best, outside of Grant Mitchell’s small town station agent who blithely recounts his own tribulations in New York with a raw nerve still dangling, would probably be Jobyna Howland as Ms. Cartlich, an older woman Bud stumbles on in a speakeasy as he dazedly seeks out Vida. The older woman flirts, assesses, and offers aid, all with a knowing smile and a nihilistic yearning. She’s rich and hates it, old and hates it even more. It’s a sweet performance placed next to Linden’s empty eyed mumbling, and a nice treat.

In a lot of ways, the movie plays like a stripped down version of Warners’ Union Station, giving the audience a panorama of small stories stuck together with some meager glue. Cliff compared the pace to Three on a Match and Judy likened it to Parachute Jumper, so, suffice to say, you’re getting double barreled Warners with this one, especially once you start counting the supporting cast– Guy Kibbee! Lyle Talbot! A strangely fourth billed Ned Sparks who gets maybe four lines of dialogue! That one guy from Casablanca! 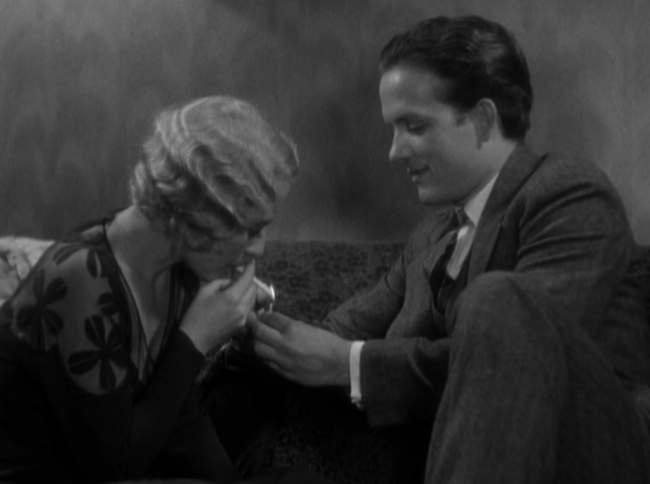 But Big City Blues doesn’t live up to the mantle when it comes to the romance portion. Blondell (who is still Blondell at the very least) is stuck in a black and white role, and the only moment where she does anything of interest– ditch the hapless Bud in the hotel room– is quickly rescinded and ignored. Linden’s youth is supposed to be the character who has his dreams crushed by reality, but Linden’s own youthfulness makes it seem that none of this ever kicks in. He looks like he’d fit in better as a rich kid that the Little Rascals annoy than in an adult movie with adult actors.

In spite of the drippy central couple and the strange choices they make, 1930s New York is the real star of the show. There’s some great moments of culture shock and just general insanity that gives you a good idea of just what a melting pot that city was, and just what it was that inspired so many Hollywood films to honor it so.

The New York City montage near the beginning effectively sets the tone for the picture: fast paced, overwhelming, and kind of all over the place. It feels like director Mervyn LeRoy rushed through the story, which really starts to lose sense near the end, especially after Bud is charged with the murder. Seriously, if you turn your attention elsewhere for a few moments, you may miss the entire explanation[.] 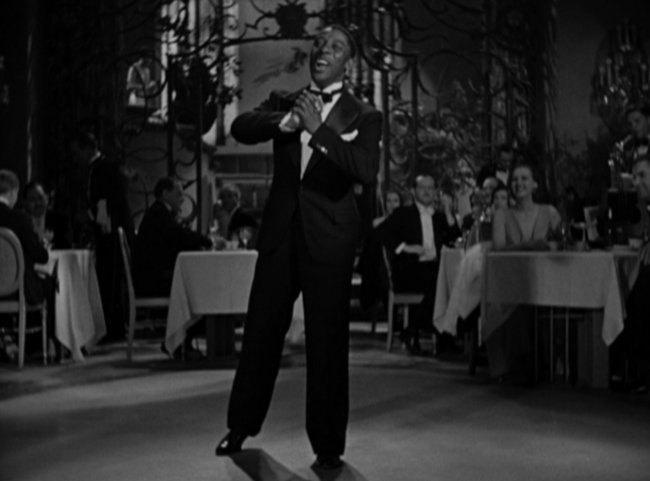 Clarence Muse also pops in as a nightclub singer, proving once more that Clarence Muse is great at everything.

The dialogue seems intentionally hard on New York throughout. It’s portrayed as a wild town filled with wild people. A reporter makes murder seem par for the course at any wild party in the city and Guy Kibbee remarks that he’d “like to go into a New York hotel room just once and not find a gin session going on.” Blondell speaks of the city’s wonders becoming routine, but adds “you don’t like the town any the less. I believe somehow your affection for the place grows and grows the longer you stay.” And it is Eric Linden’s Bud, of all people, who by the end makes a brief speech in defense of New York, vowing to one day return to the big city that had just “licked me bad.”

The simple story of a fresh-faced kid from the sticks who comes to New York and winds up two days later broke and on the run from a murder charge, Big City Blues (1932) is casually embellished with terrific talk, not just snappy lines but sparkling verbiage that flows as freely as bootleg champagne. New York in this movie is a place where chorus girls steal soap from hotel washrooms, house dicks duck into linen cupboards for a snort of booze, rich women in late-middle-age-prowl speakeasies for penniless young men, and workers dig up streets just because “this one ain’t been dug up yet.” It’s a ruthless, hectic, callous burg, but also an enchanted place that gets under your skin and makes you want to stay forever. 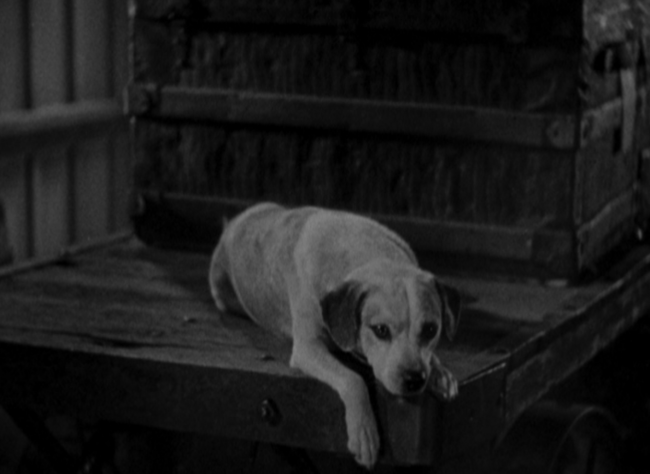 Pre-Code Dog Watch: Linden’s bumpkin has a dog named Duke who waits for him at the station back home during his brief pounding in the city.

There is, however, little doubt that Gotham deserves the scolding it gets here, for there is an element of truth about the incidents. […] In many of its scenes this tale, while not especially original, possesses the breath of life. The scenes in a police headquarters and those in the gambling den are depicted in realistic manner.

The film plays as a cautionary fable, but the pre-code script imbues New York with a certain allure. Part of said allure is Blondell as Vida. She’s all wholesome charm tinged with a bad-girl streak. Like a spiked milkshake. Before gambling away his money, Bud wonders if they should just leave. Vida replies, “I don’t wanna leave. I wanna stay where there’s noise and excitement and crowds!” Judging by Bud’s reaction, this is just the response he wanted.

Jobyna Howland! She was also Miss Reba (with the *boarding house*, cough cough) in TEMPLE DRAKE.

I know I’m supposed to feel sorry for Linden, but he’s so impossibly and aggressively stupid that I can’t help but take delight in his constantly getting skinned by this group of professional grifters.

This is an enjoyable film, because of Joan Blondell and other Warners vets like Guy Kibbee, and holy crap there’s Young Humphrey Bogart. But the protagonist, Bud…Eric Linden is just so colorless and Bud is such a moron that it’s hard to get invested in his story.

Looked up Linden on Wikipedia and it seems that he’s the soldier that gets a limb amputated without chloroform in Atlanta in “Gone With The Wind”.