They Learned About Women (1930) Review, with Van and Schenck 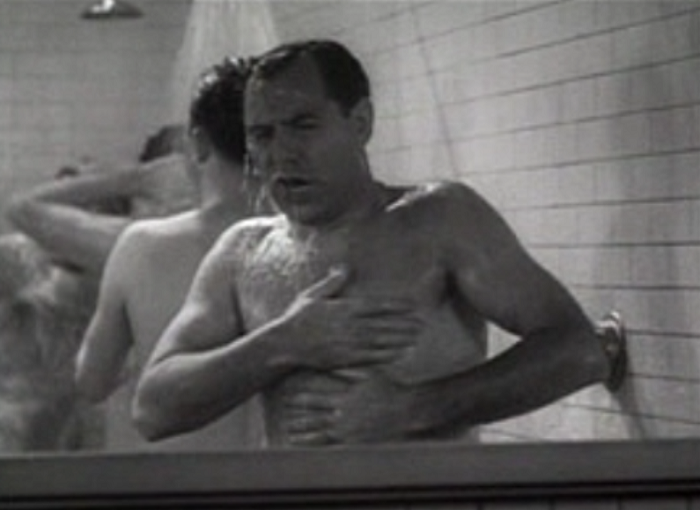 Ladies, please steady your hands at your sides for the duration of this scene.

They Learned About Woman: But Not Much

“You don’t have to be smart to be wise to a girl like you.”

I had one of those friends growing up who was very proud to be descended from Italians. Italy this, spaghetti joke that, he had a cousin who looked like the godfather, etc, etc.

I’m not one of those kinds of people– I’m a mutt of European descent– but this friend was the closest thing I knew to an ethnic person in the middle of Illinois. I only bring this up because They Learned About Women mostly consists of ethnic humor, and everyone gets a drubbing. Blacks, the Irish, Italians, Jews,  etc.  It’s not really mean spirited, though it is interesting. 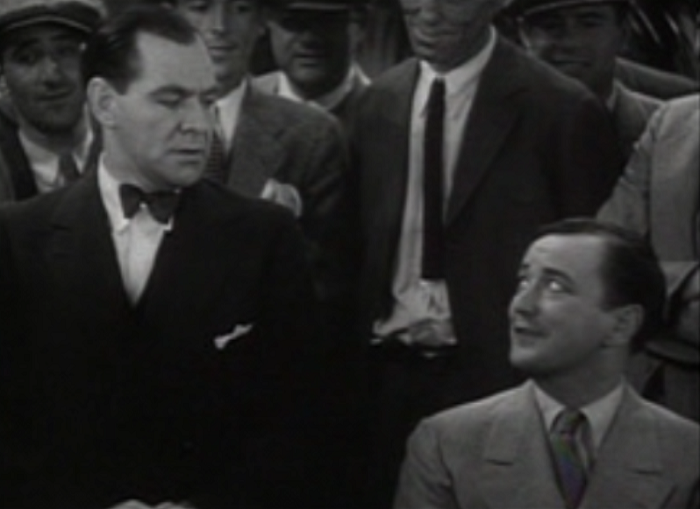 The movie stars a pair of vaudevillians called Van and Schrenck in their only feature, and they seem to simply be going back to the routines that kept them musical hall staples. It’s interesting to watch the film and consider that you’re watching a pair of vaudevillians who are playing vaudevillians and giving their unexpurgated routines. It’s the last remnant of a type of a comedy that would soon be replaced with wiseacres, screwballs, and a heaping dose of slapstick. As that, the numbers here are an interesting curiosity of a time where racial humor was the predominant cultural comedy.

That being said, the film’s music ain’t too bad. Some of the numbers are fairly static in their staging (and some go on and on), but there’s a few highlights. One is this number that Bessie Love knocks out early in the picture:

Bessie Love was a big star at the beginning of the 1930s, and she was Oscar-nominated for her role in The Broadway Melody of 1929. She’s cute enough here, but clearly sandwiched in a supporting role, and a thankless one anyway.

Another notable musical number is the film’s centerpiece, a song called “Harlem Madness” that showcases Nina Mae McKinney (Safe in Hell) gyrating and going nuts. (Flanked, of course, by our two vaudevillians in blackface.) The number is a wild, colorful piece that features young black girls doing acrobatics and a chorus line ably backing up McKinney’s wild movements. 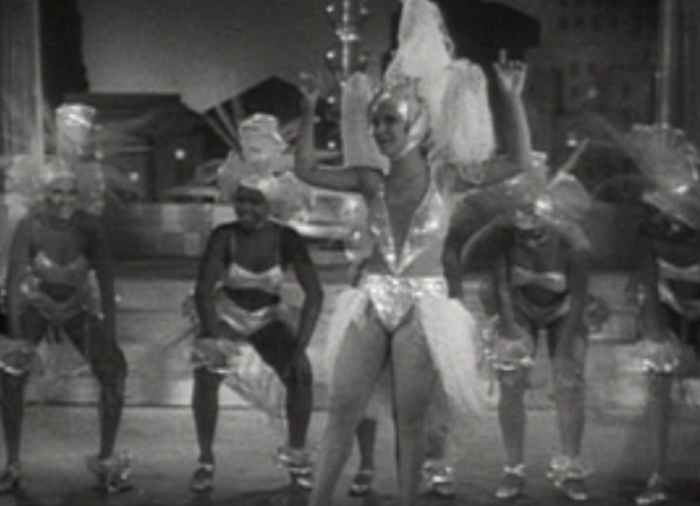 If there was a clip of this on YouTube, you’d be watching it right now.

That also leads into another piece of the film that’s interesting, and that’s the predominance of black people in the film’s cast. Not that most have any speaking roles (even the electric McKinney only appears during her number), but the film’s cross country journey shows them along the edge of the white-dominated world, from masseurs to boot blackers. One amusing bit even sees a black train conductor recognize the city they’re traveling through by the woman waving at him from her yard. But there are no friends across racial lines, and with so many black people on the fringes, it sticks out.

I hit the film’s noteworthy parts first because describing the plot is only going to depress me. Running a full 90 minutes, which is an eternity for a 1930 musical, we follow yucksters Van and Schenck as they alternate between their summer job as professional baseball players and their winter job as popular vaudevillians. This is back when all of the professional baseball players were slightly chubby 40-year-old white dudes, so the incongruity isn’t too much to take. 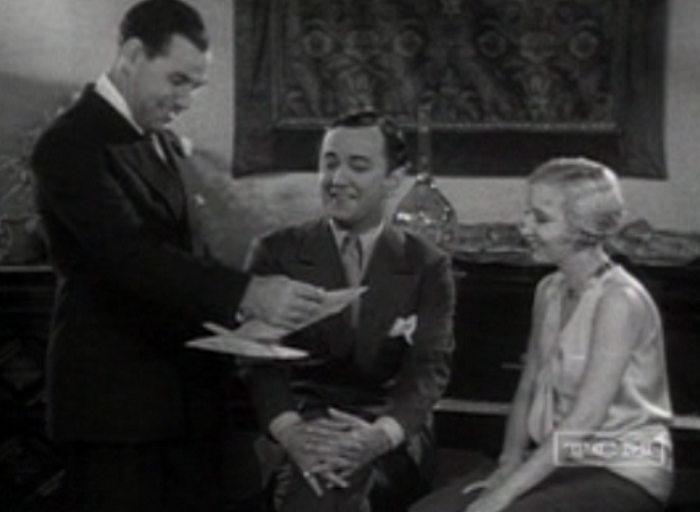 They Learned About Women is a movie that bludgeons you with its length. The flip between comedy, music and melodrama is clumsy; like a bored proctologist, they’ll look for any flimsy excuse to shove something in. Schenck’s Jack is the polite smart aleck in love with Mary, who Van’s Jerry also has a thing for. A gold digger comes between them, and she messes everything up until she finally departs in the third act (off screen, no less). Here’s the best line that the eternally grumpy Schenck manages about her:

“She’s so crooked they’ll have to bury her in a trombone.”

Then it’s time for the big pennant game, and it goes through the motions as all of those movies about the crucial pennant games must. By combining the lead characters as stage actors and baseball players, the audience is really treated to the worst of both genres. They Learned About Women is best as a curiosity, a boring clunker with a couple of good moments. 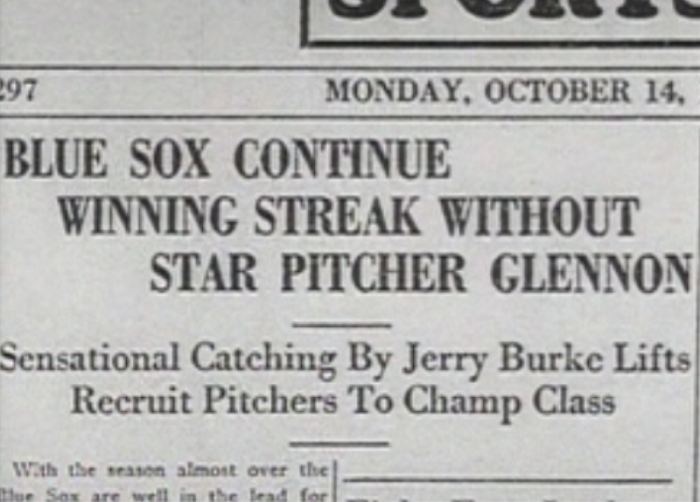 I don’t think that any catching is quite that good.

They Learned About Women is neither boring nor brilliant. On the plus side, are the large range of settings found, everything from training camp to vaudeville houses. David Cox’s costumes are also spiffy, especially the suits and formal wear for the men. The film’s humor is cornball, although you have to like a radio announcer called Graham McCracker. The ethnic humor is badly dated, although it can be said that it is not malicious, and probably was not an attempt to denigrate or spread hatred against any ethnic group.

Thank you for a balanced review of this film. I get tired of reading the same old claptrap as to how Van and Schenck were has-beens, had no talent, Schenck was an awful singer etc, etc, and appreciate that you mentioned that they had a very decent run of success, indeed since the early 1910’s. That their style of singing was on the wane (hey, so was Al Jolson’s) doesn’t take away from the fact that we can see and hear them in the WB and MGM shorts that they made, as well as this film, and that they come off well in the new medium.

After watching enough 1928-30 talkies, MGM’s, although glamorous looking at times, are so clunky with the awkward editing and pacing. Van and Schenck deserved better than this, but at least we have a substantial filmed record of a top vaudeville duo from shortly before Mr. Schenck’s demise. These acts had their place within their time, and thanks once again for not looking at them from the standard of some later time period when everything that’s not Gene Kelly, Astaire and Rogers, or Busby Berkley is written off as “lame.” Those who are “lame” are those who don’t appreciate things for what they were, in proper context.

Ha, just a little. As a person with a singular passion, I always like hearing from others with their own obsessions. Thanks for sharing!

Just saw this one recently on TCM. A definite curiosity, and I’ve been really surprised at how badly dated all the early MGM musicals seem when compared with Warner’s – but I agree with Clate that it’s great to have a filmed record of a vaudeville act. The “dialect number” was a common feature in vaudeville, and while many of the stereotypes and slurs feel wildly offensive today, racial and ethnic differences were a run-of-the-mill subject for humor among vaudeville comedians.