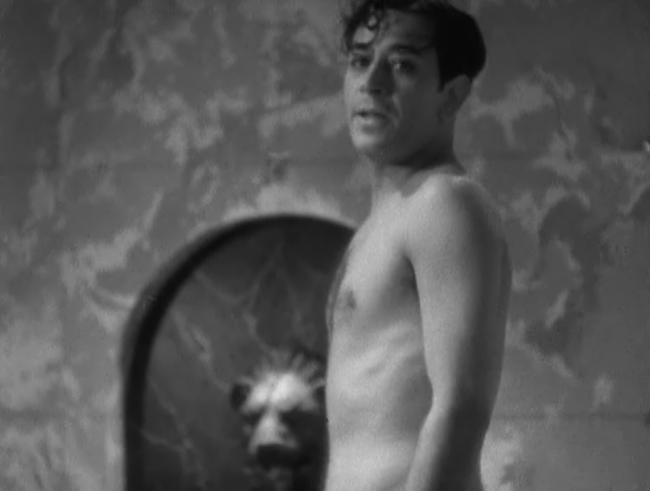 You see more than this in the movie, but I wanted to preserve you, the reader, and your delicate sensibilities. 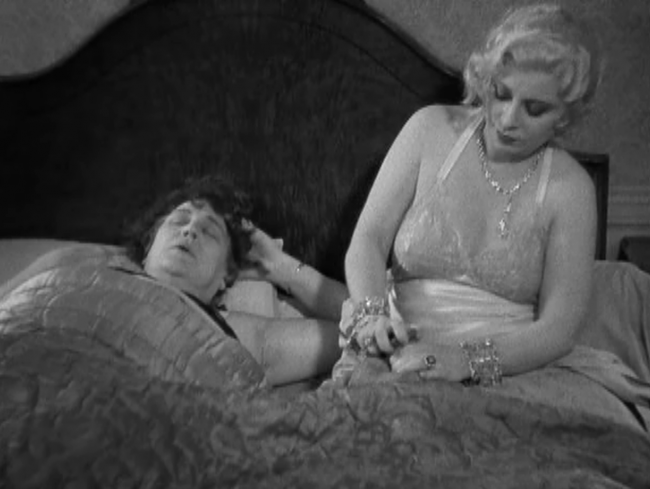 This looks like every girl I was in love with in college.

Night After Night: The Mob Mentality

“Goodness had nothing to do with it, dearie.”

I don’t get to toss out the word ‘bawdy’ nearly often enough for my taste, but Night After Night, one of the exemplars of pre-Code Paramount’s saucy mixture of class, crime and canoodling, definitely earns that moniker. And judging from the reviews I found (or, to be more precise, couldn’t find), it is woefully underseen.

George Raft, riding high after making the coin flip iconic in Scarface a short while earlier, gets the leading man push as a former hood turned speakeasy proprietor named Joe Anton. Joe’s got a problem, and it’s not the rival mobsters barking at the door– he wants culture and excitement. He takes diction lessons and wallpapers his room in framed photos of framed European locales. His right hand man (who it seems wouldn’t mind it being a little more) is Leo (Karns), tries to keep his boss focused on the murderous thugs while also juggling all of his boss’ women. 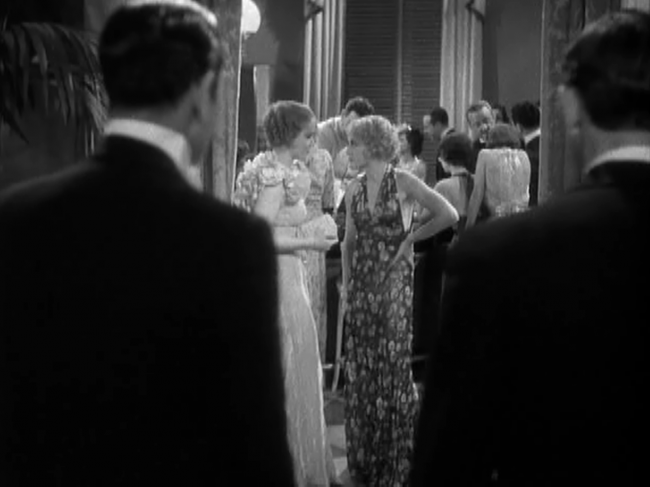 Are you ready to rumble?

This includes the possessive Iris (Gibson) and the bawdy (YES) Mabel (West), plus the latest object of Joe’s obsession, Jerry (Cummings). Jerry’s family used to own the house that Joe’s speakeasy now occupies, so she appears there nightly to stare at the home of her youth before her fortune was stripped away and all she was left with were her memories.

Joe likes her air of class and sophistication. She becomes fond of calling him a pirate and, after a close shave, gives him a big kiss. He takes it the wrong way, but only because she’s become so hollow on the inside she’s forgotten that something belongs there. Things are sorted out with only a few shots fired and a minimum number of deaths. 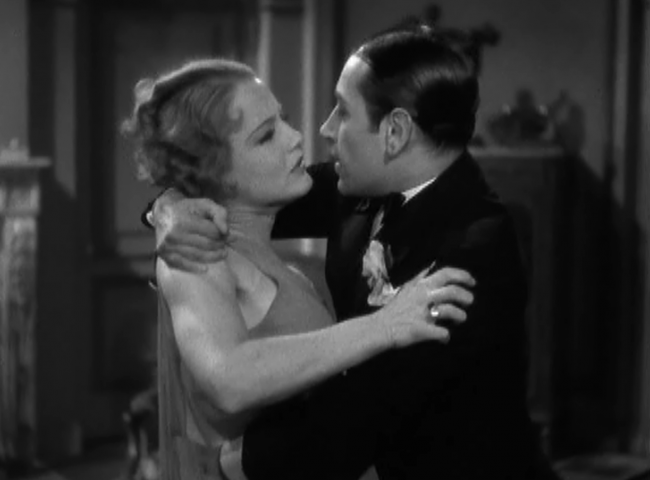 The real pleasures of Night After Night are in the side stories and the many ludicrous innuendos that dot the movie. There’s Leo’s affectionate treatment of his boss, micromanaging every detail to try and keep his friend carefree– but also delighting in taking the piss out of him when he gets too full of himself. There’s also Joe’s diction teacher, Maude (Skipworth), a refined but accepting woman who makes the mistake of spending a night in a speakeasy and seeing her whole world turned upside down. And then there’s Wynne Gibson’s Iris, who is spiteful, childish and surprisingly clever, and keeps everyone on their toes. “I’m not a good sport,” she insists angrily when she sees Joe waltz off with Jerry. “I’m a tough loser!”

But the show is undoubtedly stolen by Mae West’s loud, brassy Mabel, who sweeps in from a loud, vulgar universe to ramp up the film’s craziness. If you know West’s double entendres, you won’t be disappointed. This is West’s film debut and one of the very few times she’s in a supporting role for obvious reasons. As a completely unapologetic woman, she mows over and charms all those before her, audience included.

George Raft, who I’ve never really cared for in the slightest (and is usually portrayed as one of the dumbest stars of the era in a bounty of behind-the-scenes materials), comes across here with warmth and a steely determination that never segues into wide eyed histrionics. While he lacks the forthrightness of Gable, there’s something to said for his more laid back approach, and it’s easy to empathize with him. Cummings, who is equally disillusioned, also plays her character on a tight wire between desire and practicality. She gets a great scene near the end of the film where she tears Joe’s room to pieces, which I wonder if Welles saw in his pre-Citizen Kane days.

Director Archie Mayo and the rest of the creative crew do a great job in establishing the setting, making the speakeasy both grand and intimate all while keeping the viewer firmly grounded in its structure. The film spends the first 16 minutes happening in realtime and the movie itself only covers the course of a few days, giving a nice sense of immediacy as well as intimacy as we’re shown the business’ workings from the ground up. 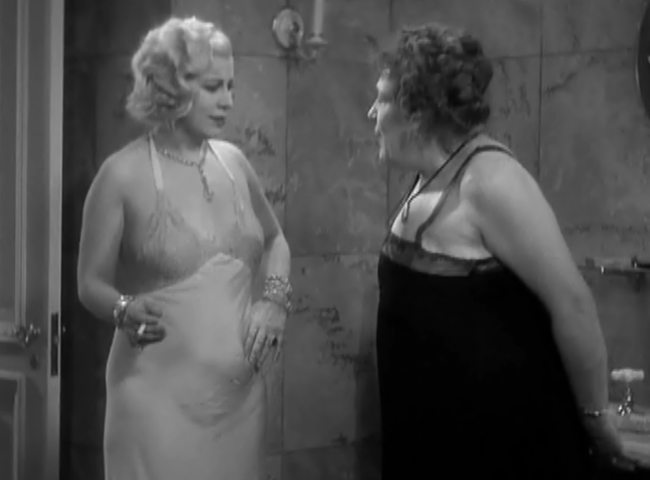 Who could possibly find anything objectionable about Mae West? And, yes, those are her nipples.

Rather than comment directly on the class system– “being rich is bad, being poor is good” like many other Depression pictures proffer– Night After Night bounds for somewhere down the middle. Your problems come from trying to be what you’re not, whether that’s a cultured gangster or a slumming socialite. The best thing to do is find a compromise between what you want and what you need, and you’ll be rewarded. In time, of course.

Night After Night mixes seediness with class to a great degree both in the way it’s filmed and what’s on screen. What’s left is a nice little hidden gem, well worth it for anyone who wants some more West in their life.

Thirty-five years later, we’re left with a rather odd feminine screen presence that seems not of this earth — or at least not the earth we occupy today. Were there ever women like Mae West? I mean, even in the Gay Nineties, inevitable setting for virtually all her movies? Maybe the real-life Jenny Lind or Maud Adams were like this — Sarah Bernhardt in her youth perhaps? West must have seemed peculiar even during the peak, albeit wildly popular. That generous, if corpulent, figure adhered to conventions of an earlier day (the gay nineties again), not to mention studied theatrical posing in costumes that must have weighed sixty pounds in the box. I was reminded of this unspooling Universal’s DVD of Night After Night, Mae’s 1932 motion picture debut. This isn’t much of a movie, but it may well be the best thing she did, and for all that, it’s worth a closer look.

I personally like this movie very much, and enjoy the interaction between George Raft and Mae West. In real life, they had an affair (1920s) and after that cooled, they became friends for life, keeping in touch until the end of their days. They actually died within a few days of each other, in 1980. I wonder if her little intro, where she says ‘she knew him when’ was ad-libbed. She certainly did know him when!

P.S. I think Raft had a lot of sex appeal, but his mistake was in trying to manage his own career. It’s well known he made some awful choices and turned down roles that were then snapped up by Humphrey Bogart (High Sierra, Casablanca). Not too bright.

Great background on the two. And, yeah, Raft in the right role is great. He just didn’t know how to pick ’em!

I agree with all you said especially about George’s sex appeal but I am not sure about his not being too bright. I think he could have used some better advice from someone who gave a dam and that certainly was not his wife.

I guess that did sound a bit harsh, and you’re right about the wife he was ‘technically’ married to for decades. His choices were made carefully, for what he thought were good reasons, but risk avoidance caused him to lose some excellent roles. From what I’ve read, he was always afraid if he picked the wrong ones, the public would turn against him, and he’d lose his place in Hollywood. (However, he ended up having a 50-year career.) Check out his 1980 interview on YouTube, made months before he passed away; still sharp as ever at 85 years old, and he clarifies his birth date as September 26, 1895 not 1901.

I was just on your Pre-Code site looking at all of the male actors names. I was quite confused why George Rafts name is not included. He was in 16 of the movies on your Pre-Code movie list. Five in 1931, 6 in 1932, 3 in 1933 and 2 in 1934. I can write out the list but I’m sure you know them. Just for taking a bath in Night after Night and his dance with Lombard in Bolero (the movie that turned me on to your Pre-Code site) I would think he deserves a mention in the male actor category, don’t you? He may even qualify for a Pre-Code Filmography! Thanks for listening and I would love hear from you.

I gotta check out this one!

I hope you do!

After filming wrapped on The Women at the end of June 1939, Norma Shearer traveled to New York to vacation during the Worlds Fair, and that’s where she met Raft. By then, he had a near legendary reputation in Hollywood as a skilled lover and bedroom technician. He also aspired to class “and this time he really found it.” For Norma, on the cusp of 37, and always worried of losing to the aging game, the benefits are more self-explanatory.

It was the most serious love of Norma’s between Irving Thalberg’s death in 1936 and the arrival of second husband, Marti Arrouge in 1942. There are many pictures of them together, including film of them at the same table at the Oscar ceremony in spring, 1940. Norma was serious enough to set out Raft’s pictures in her home, as well as inform MGM she’d like star in a remake of A Free Soul, with Raft in the Gable part.

Raft took a sincere interest in the Thalberg children, taking Irving Jr. to ballgames, and building a dollhouse for Katherine. The fly in the ointment was Raft’s estranged wife, who kept increasing her settlement demands to an amount that would clean him out. It was all over by the autumn of 1941.

Wow, I had no idea. Thanks for sharing!

Danny, you might want to point out that Mae West wrote all her scenes in Night After Night. This is notable especially for the hilarious scene where Maudie, after they have cemented their friendship by drinking several bottles of champagne, offers the startled Miss Jellyman a job. Miss Jellyman, obviously thinks she is a prostitute or at least a madam, and stammers “Don’t you think I’m a little old?” All is forgiven when it turns out that Maudie owns a chain of beauty parlors. But Mae neatly structures it so her character in fact has not done anything amiss, and the innocent society lady is the one with the dirty mind.