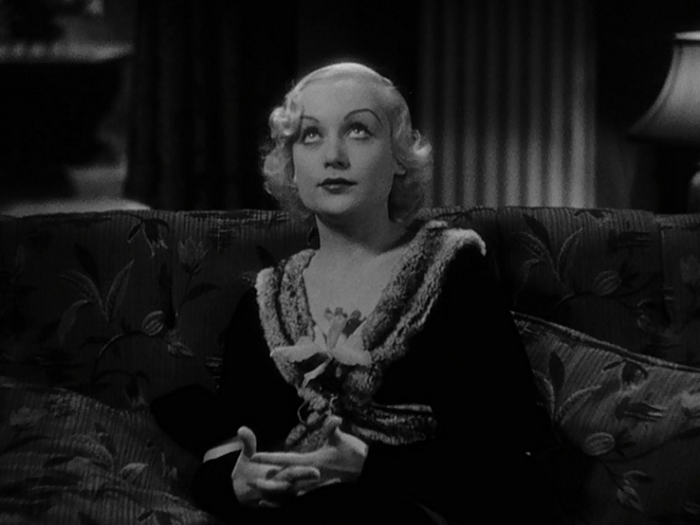 No More Orchids: A Floral Affair

“You can’t go back and do things over, Smudge. Not in this life.”

No More Orchids falls into that category, a movie that dutifully follows a romantic plot then runs headfirst into a family drama. By the 60 minute mark when the film has decided to start following a different main character, it asks you to reevaluate where you thought the picture was going again. What is No More Orchids trying to say? A lot, apparently, and it certainly fits it all in.

Like Lombard’s other loan out to Columbia, Virtue, No More Orchids is essentially about expectations running into the wall of reality. Here’s she’s a rich heiress who meets a charming young lawyer on board a cruise ship. To make matter’s complicated, she’s already engaged to a man– a prince, even– and the whole ship is abuzz with gossip. But Lombard’s Annie is wry and cunning, and she won’t let Lyle Talbot’s Tony Gage get away without a fight. They race on exercise bikes and banter over cocktails.

Supervising Annie is her Grandma Holt, a flippant old bird whose favorite past time is drinking until she’s blotto. She also enjoys deflating Annie’s ego. When they get ashore, they join Grandma’s son and Annie’s father, Bill. Annie calls him Bill; he calls her Smudge. She saddles up to the bar on the second floor of their mansion and explains her predicament. Bill smiles and tells her to go for it.

On the other side of Annie’s family is her grandfather, Cedric. He’s harbored a grudge against Bill ever since he stole his daughter away and is eager for the chance to get him back. He’s also part of the 1%– maybe even the 1% of the 1%. He was the one who sent her to Europe in the first place to arrange a marriage with Prince Carlos. He owned the cruise ship that took her there and back, and he even financed the war that brought Carlos’ family to power. Though he and Annie have a loving relationship, he’s not going to let an affable guy like Tony get in the way of his ultimate dream– connecting the family name with that of royalty.

To make matters worse, Jerome has gotten the dirt on Bill– the bank that Bill runs is failing. If it goes under, he’ll be put in jail, even if the worst things he’s done is been generous with loans. Annie adores her father, and when Jerome puts her in the position of either saving his hide and marrying Carlos or running away with Tony, she’s stuck, but bad.

Although the movie could be billed as a romantic comedy for the first half or a harrowing drama in the second, it maintains its tone by making its characters, all save for the truly nasty Jerome– sly and lovable. Even though Walter Connolly, Louise Hale, and Carole Lombard would never be mistaken for a family in real life, they have chemistry and a real, lived-in sense of affection for one another. They welcome Tony in with welcome arms; the scene where Bill shows off his scrapbook of beloved dogs and, yes, turkeys to Tony is a highlight, especially once Annie begins to feel that Tony may be becoming more interested in her father than he is in her.

Oftentimes in movies like this, where the woman has to terminate a relationship suddenly due to pressure from an outside force, I’m always stuck wondering why she doesn’t just tell the man why it has to happen. Because the woman keeps the real reason bottled up, the man sours and becomes contentious, with the only thing that could clear up the air being a third act Hail Mary play. But I think I understand Annie enough to know why she doesn’t tell Tony the truth, even after the two have become intimate. She believes that he would try and talk her out of making the sacrifice for her father, and she’s afraid that he’d succeed. The kicker is that I don’t think Tony would actually do it. It’s a contention, of course, in the character’s minds that their romance is new and they don’t know each other well, but the small group– Grandma, Bill, Annie and Tony– establish their camaraderie with such sublime ease that it’s hard to imagine a scenario where Bill and Tony wouldn’t try to team up and save the day.

But Annie knows Jerome and she knows it’s useless, so she doesn’t give in and tell Tony the truth. Only Bill, who knows her well enough to sleuth out the truth on his own, can think of a solution, and that’s only by thinking outside the box. Way, way outside the box.

As mentioned way at the beginning of this review, the film switches things up as we near the middle of the third act. Bill discovers that Jerome is forcing Annie to marry a man she clearly doesn’t love (and a man who clearly doesn’t understand the appeal of raising turkeys). The two meet and the moment is electric; Walter Connolly, one of Columbia’s finest character actors, and C. Aubrey Smith, one of the biggest scene stealers of the era, square off. It’s a short scene, but there’s so much resentment built up between the two men, and director Walter Lang really pushes it between them. Jerome gloats, Bill promises that he will find a way to save his bank and his daughter’s happiness. Jerome has the biggest, nastiest smile on his face– Bill’s problem is a monetary one. When you’re like Jerome and you’re pulling the strings of a nation’s economy, crushing a bank at will is child’s play.

Bill has nowhere to turn to until his Vice President mentions, “the crash”. The film has established Bill enough by now that we know he has plenty of big expensive toys (we even see Lombard handle a model plane in a cheeky bit of foreshadowing) and we also know him well enough that if this is his only solution, he’ll seize it with gusto.

Connolly’s finale has to be one of the most perfect moments of cinematic catharsis you can get from the era. His death is pretty much, to use a modern parlance, badass. He dies on his own terms; he tells off the man who tried to make his daughter miserable. He gives his daughter and the man she loves the freedom to live life on their own. He shares one last bittersweet drink with his mother. And then he crashes his plane into the side of the mountain with a nice big smile on his face.

(Side note: the pre-Code plane suicide counter is now up to three, following this, Christopher Strong, and Dr. Monica.)

Bill’s death is also symbolic of the dying of an era. Bill’s the gregarious businessman, the one who could afford to be good to people and was. The Jeromes of the world want nothing of Bill, and will do anything to stop them. That Jerome survives the film to stew another day is fine; the failure of his blackmail in the film is a collective spit in the face from Bill and every working man in the audience.

I also wanted to remark on Prince Carlos, because I can and you can’t stop me. The Prince is an emblem of European stuffiness, a humorless individual with a monocle, stiff legs, and an almost robotic understanding of humanity. Apart from this, he has essentially no personality; his affection for Annie is mechanical, and it seems that the only reason for this union is to pay back Jerome for putting his family on the throne. I mention this again because it’s an interesting take on post-Great War opinions on Europe. While Carlos’ name sounds more like he’s from Western Europe, his demeanor is more Eastern, making him a representative of the whole. Isolationist tendencies that were running rampant in America at the time seem to inform his portrayal here– a mere henchman of Jerome’s uber-capitalistism. Europe in the filmmaker’s isn’t sophisticated like Lubitsch’s or Sternberg’s view, but a large swath of passionless stooges fighting each other for control of some dirt.

For all of the praise I’ve been lobbing at Connolly and Smith, I would be eternally damned if I didn’t mention how utterly perfect Carole Lombard and Lyle Talbot are in the two leads. This is one of the earliest films that could be classified as much a comedy as a drama for Lombard, and she shines as she delivers zingers left and right. A highlight is a scene where she’s so desperate for attention from her father and Tony chumming it up that she has a conversation with herself. Talbot, a handsome man who usually plays the place in the screenplay marked “handsome romantic lead” gets a good break here, as Tony is both wisely cautious and compellingly playful. He also has an edge to him; when Annie spites Tony, he barely keeps his anger in. Both characters are flawed, and both actors sink their teeth into their testy romance with full gusto.

So, is No More Orchids schizophrenic? Definitely. Is it an odd hybrid of slapstick, romance, drama, and rambunctious family comedy? Certainly. And does it fail because of all these traits? No. Magnificently, it succeeds because of them.

Lombard had just made Virtue (1932) at Columbia, and was a favorite of studio head Harry Cohn, whose salty language matched her own. He was so fond of her, in fact, that he gave her solo star billing in No More Orchids for the first time in her career. According to Screwball: The Life of Carole Lombard, by Larry Swindell, Cohn had suggested that the film be called Roses for Annie, and Lombard replied, “Roses, snapdragons, lilies, call it any flower except orchids – I’m ready for some other angle. No more orchids for me.” That was a reference to a Paramount publicity campaign promoting Lombard’s alleged fondness for orchids. But Cohn liked the sound of it, and decided it was the perfect title. The phrase also found its way into the film’s dialogue, expressing Anne Holt’s willingness to give up her rich-girl lifestyle to marry her poor boyfriend.

3 Replies to “No More Orchids (1932), with Carole Lombard and Walter Connolly”