Susan Lenox [Her Fall and Rise] (1931) Review, with Greta Garbo and Clark Gable

“I think the most amusing thing about men is that they mistake cruelty for character. They can’t forgive.”

That line is a turning point in Susan Lenox <Her Fall and Rise>, and it’s not a good one. Up until it, Susan is completely correct in assuming all of this. In the world of the film, she’s been degraded by men, attempted to be raped by a man who she’s being forced to marry, made love to one good man and then spurned by him, and then finally raped before deciding the only way to succeed is to sleep her way to the top. In a world ruled by men who use virginity as the only meaningful symbol of goodness, sexual violence becomes a weapon that they wield with casual malice.

It’s a bleak outlook, a spiritual prequel to 1932’s Blonde Venus which would take the idea to its logical extremes. But Susan Lenox, whose first thirty minutes are a moody, bleak emotional piece on the ugliness of being a woman in a world of unbridled patriarchy, to borrow a phrase, wants its cake and to eat it too. 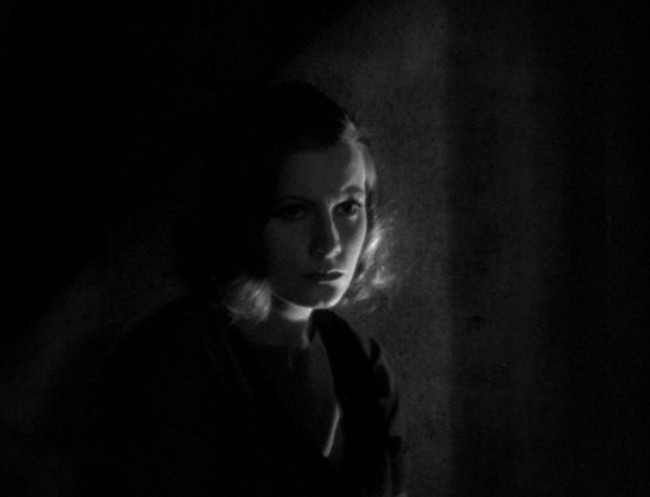 It’s a sucky world after all.

Let’s start from the top just to keep everything straight. Born to an unwed mother who dies during childbirth, Helga (Garbo) is raised by a demanding, cruel uncle named Ohlin (Hersholt) who becomes obsessed with keeping the girl’s hopes firmly in check. Much of her raising on a remote, cold farm is told as shadows against a barren wall, with Helga growing into a near mute trapped in a Calagari-esque nightmare. He hisses, “What’s in the blood is there. And no one can change it.” When her uncle arranges her to marry the corpulent Mondstrum (Alan Hale), who decides to take his wife a little early and without her consent. In a scene reminiscent of The Wind, she runs out into the stormy night and into a world she knows nothing about.

There, things get better. Well, better before the fall. Hiding in the garage, she’s come upon by the congenial Rodney (Gable) who invites her in and, hey, doesn’t try and rape her. They have an instant sweet chemistry, and she spends the night. He spends the next day teaching her to fish (which does not go well) and making love (which presumably goes better). But Rodney has to run and enter a bridge design contest, as you often must do, leaving her alone to be chased after by her uncle once more. 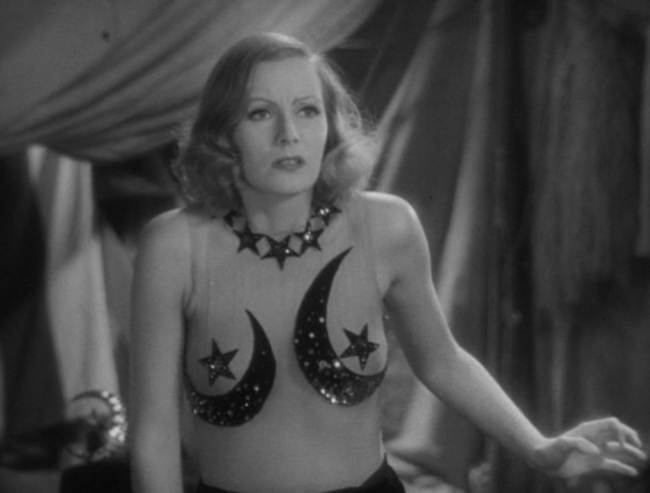 Yeah, I had the same look last time I got caught in this outfit.

She hides away in a circus where she unfortunately has to face an unbearable choice– to be taken back and forced into marriage or to allow the ringmaster to rape her. Rodney discovers her choice and storms off in a huff, refusing to listen to her rationale since she’s become tainted goods and beneath contempt. In revenge, she promises him that old line about her bedroom being open to every man but him from now on, etc, etc.

A year, maybe more later and Rodney has become an alcoholic mess, while Helga has snuggled comfortably in high society. She has a friend bring him to an upscale party in New York to show off and prove that she’s found happiness without him. That’s where that line up at the top comes in, and it’s unfortunate response. Because, up to this point, Helga– who now calls herself Susan Lenox– is absolutely right. She finally found a way to manipulate that system for her own gain and has succeeded. And only at the cost of the self respect Rodney had denied her so many years ago anyway. 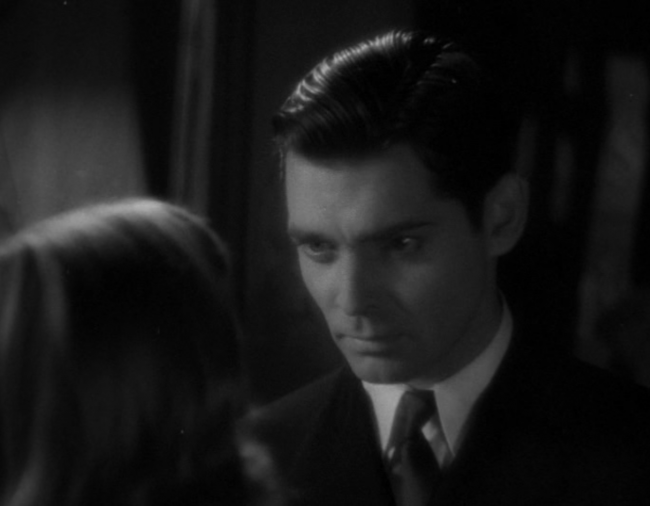 But Gable turns on her, angrily explaining that he’d come back to beg for her to forgive him later only to find her gone. He calls her a parasite and storms off once more. She realizes he still loves her and she must still love him, thus beginning a cross country search

The last third of the movie drags unforgivably as Helga and Rodney dance around each other more. Susan warbles, “This hurt that we have inflicted upon each other– it’s become a bond. Nothing can break it.” Upon the audience, too, as the bleakness (and shadowy visual wit) fades and we’re stuck in doomed romantic relationship where Rodney is simply too stubborn to forgive Susan for her transgressions. 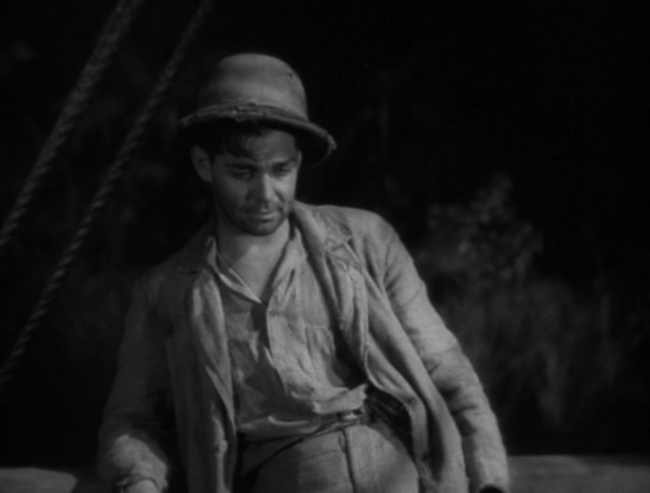 “Is the Red Dust set around here? I think I took a wrong turn at the Painted Desert.”

The script and story, especially the parts of a woman expressing her sexual prowess as a spiteful weapon, smell heavily of Norma Shearer’s escapades in The Divorcee, but the frustrating, empty back end reeks of Strangers May Kiss. This is one of those movies Roger Ebert used to complain bitterly about, where one quick and simple conversation could save everyone a massive amount of time and hurt feelings, but then they wouldn’t have the run time they so desperately needed.

The shift in mood cheapens its brutal honesty about men’s manipulations and cheapens it to another woeful romance story. Will Gable and Garbo get together? I wouldn’t take any bets on it. That ending is all about romantic fidelity, and how staying truly in love with one person can help you overcome all of the vile cheapness in the world. Love conquers all, the movie implies. It’s an old sentiment, and feels even older now. The movie doesn’t earn it.

When the film was finished, the notoriety of the novel alone was enough for British censors to ban it from release. With a few swift cuts, however, it was finally approved in the UK with a new title: The Rise of Helga. Though Susan Lenox went through as many as two dozen writers and the pairing of Garbo and Gable was awkward, the film did make money. There was talk of starring the two together again in the movie Red Dust (1932), but it was not to be. Gable made Red Dust with Jean Harlow instead, and Gable and Garbo never made another film together. 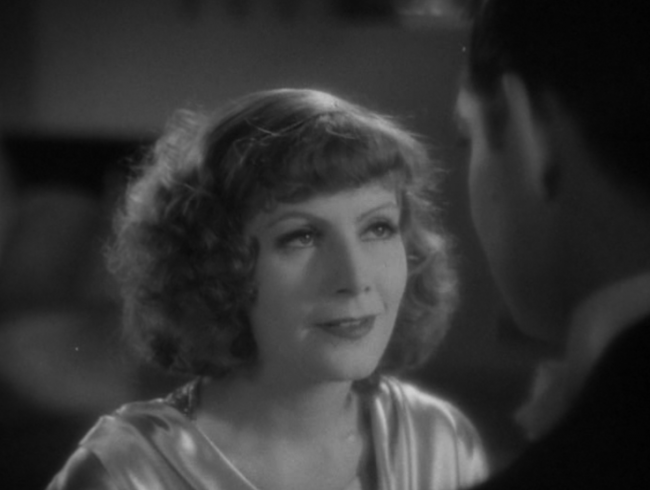 I’m not sure this hairstyle works on Garbo, but I’ve seen worse.

Fun fact: Clark’s loyal canine companion in the film, Major, was actually his own dog. I’ve heard two versions of that story–one is that the dog was already Clark’s and when he learned that they needed him to have a dog for the film he volunteered his own and they didn’t even need a dog trainer because the dog did whatever Clark told him to do already. The second story is that the dog was a trained movie dog and at the end of the film Clark loved him so much he paid the dog trainer double what he was worth the keep him. I tend to believe the first story myself. 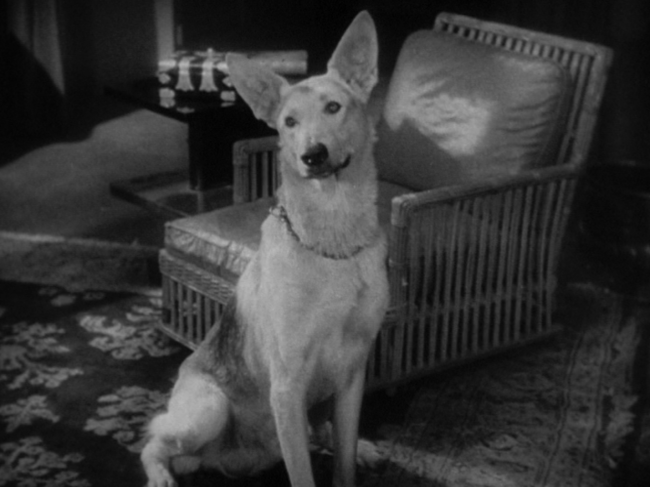 There is Miss Garbo’s compelling performance, splendid camera work and praiseworthy atmospheric effects, but the dialogue is often choppy and most of the incidents are set forth rather hurriedly.

Danny – Very fair and good review of Susan Lennox. I’ve watches it a couple of time, having gone over it for a book I wrote on costume designer Adrian. Like other films of the time, the stars and wardrobe were better than the script. Still, it deserves to be analyzed, so thanks for covering it.

Sure. And the wardrobe here definitely deserves more praise and discussion than anything else about it.

I was excited to see you review this movie since I just watched it a couple of weeks ago and was disappointed when I couldn’t find a review of it when I came to your site afterward. I had a contrary view and liked the movie a lot. I actually was indifferent towards Garbo before watching this film, and seeing her in it made me like her more. I also liked her and Gable together, and am surprised they weren’t put together again. Perhaps that has something to do with them not liking each other as you mention. Even if I don’t have the same opinion on a film, I still enjoy reading your reviews, so thanks for posting them!

Thank you for your kind words! The two do seem to work together well here, but I can’t shake the fact that they really had no idea how to end it and it shows. I do wish we could have seen that version of Red Dust they were supposed to have made together– I doubt Garbo would have frolicked in the rain barrel quite so freely…

It’s not true that they disliked each other. Garbo asked for Gable and he appreciated learning from her. They got along well.

im watching it now, and in italian-as i am effectively italian- and too bad the singing in the rain part is missing. actually a lot of background noise is missing as it’s a new dubbing.
anyway there are some things that i can’t help but notice
1)when susan becomes a prostitute in the train she seems so ok with that i totally got that she already was doing it back in the day in the old house. still,she is super naive about everything else. feels like ROOM, you know?like she never ever left the house or something.BUT she is ok with being a prostitute
2)garbo is SO bad casted. let alone 2 faced woman, THIS is her more extruciating role. GG as a naive? who had the idea? and she acts it like she thinks she should speak really slow and calm and stupid. that s how she sees the ingenue. lol.it’s COMIC.