Year after year, I’ve looked at other bloggers with a mix of admiration and jealousy as they’ve intricately planned out their schedules at the annual Turner Classic Movies Film Festival. Every spring it’s the same thing, seeing other bloggers post like debauched emperors, “Should I perchance suckle upon a new restoration of The Thin Man or mayhaps take a luxurious nibble on the cheek of a personal appearance by Jane Seymour?”

Well, the shoe’s on the other foot this year, jerks! As my first post on the subject noted, I, too, will get to be a debauched emperor as I will be attending the TCM Film Festival in just a few short weeks. That means I get to put together my own Nero-at-an-orgy schedule of unearthly delights of the cinematic realm. (And no promises as to whether or not I’m just wearing a bedsheet while writing this.)

Here’s the full schedule over on the TCM Film Festival’s website.

My plan so far is to arrive in Los Angeles around noon on Wednesday, the 25th. I lucked out in two regards: my wife has a friend who lives in Studio City who will let me crash on their couch, and I got media credentials for the Festival, meaning that all I’m spending money on during the festival is travel, food, and bail money for any attempt I may make to steal Ann-Margaret.

I’ve pretty much been following Will McKinley’s obsessive-compulsive guide to the festival from last year which has helped shape a lot of my planning, and, if you’re going, it’s a must read. Most of my choices for the following schedule are based on these criteria, in order:

As always, choosing what to see and what to skip is like playing Tetris on its highest levels, only instead of being met with .midis of sped up Russian music, you’re missing out on opportunities that you will never have again in your entire life. With this in mind (and the fact that the trip from Japan to America will probably leave me a bit jet lagged), here’s what I’m planning on for the time being: 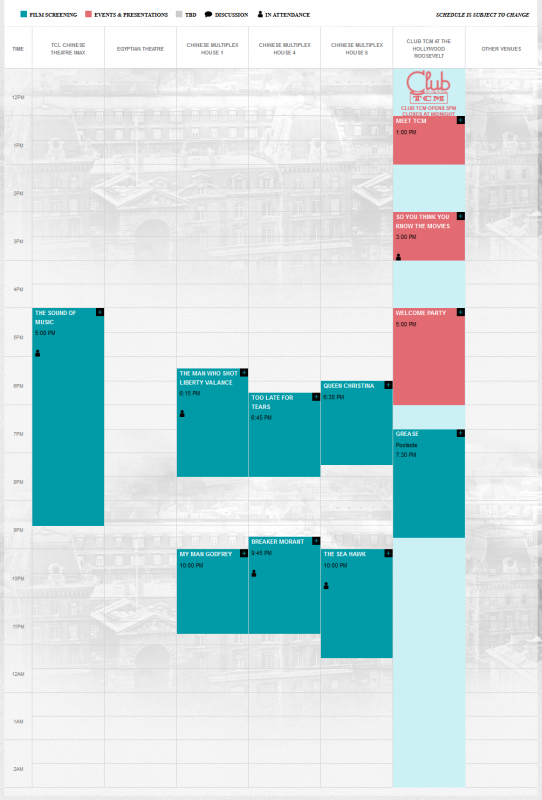 Unsurprisingly, the easiest day to plan is the one with the fewest showings. My plan right now is pretty obvious, but here you go: 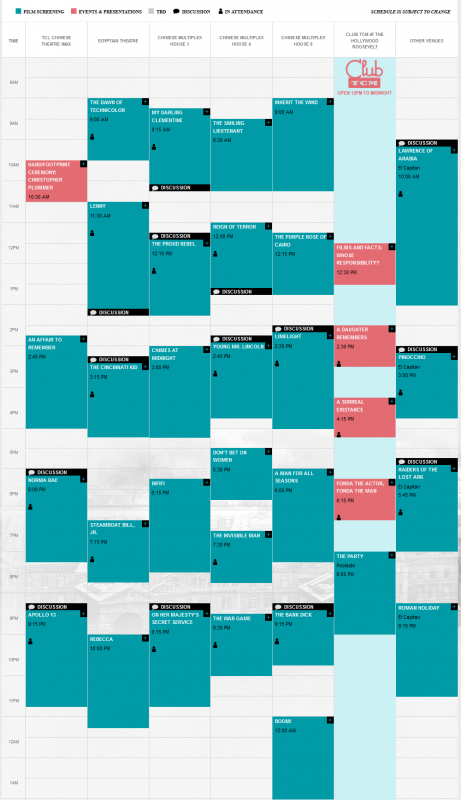 Friday morning and there’s already challenges. That, and it’s probably the largest amount of movies that I’m going to sit through in a day in the whole festival. Let’s hope that jetlag is either gone or my crippling caffeine addiction is in full swing when we get to this point. 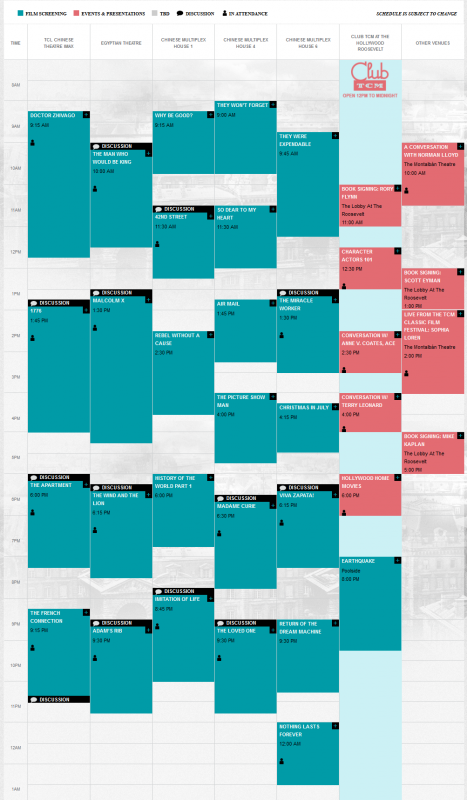 Where I packed my schedule with movies on Friday, Saturday I’m looking at doing a little less. We’ll see how that works out. 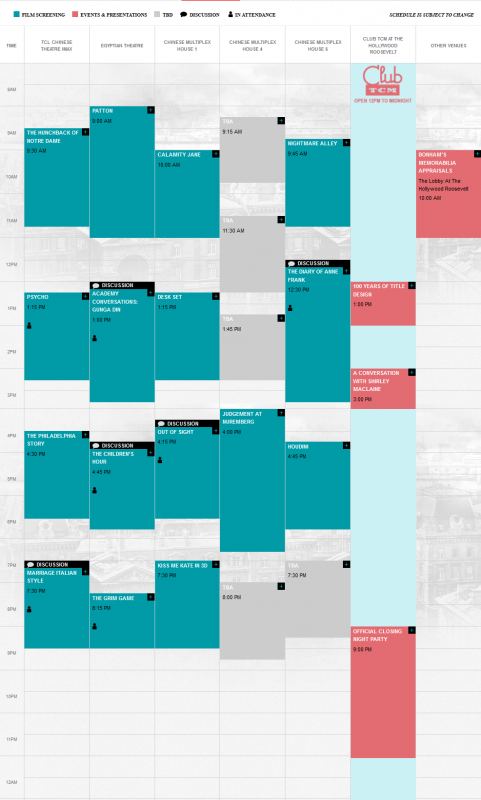 Sunday is the hardest to plan because several showings at the Chinese Multiplex are still marked TBA, so there’s a big chance that this whole thing could be upended in a few weeks time. As for now, my schedule is relatively tame:

And then my flight leaves Monday around noon. Any breaks I have will involve exploring Los Angeles, which I’ve never visited before. I’ve heard they have stores that sell movie memorabilia and/or cool vintage clothes, so I may have to seek those out, too.

I’ll list other bloggers here when I see them post their breakdowns. If you’ll be there, hopefully we’ll get to sit in line and chat and/or throw business cards at each other. I have a business card for this site! It probably won’t surprise you that Joan Blondell is on it…

But I’m very excited, and its hard to believe that this is only two weeks away. TWO WEEKS AWAY. … LET’S DO THIS.

So what do you think? Am I making any ghastly errors? What would you like me to cover in particular? Let me know in the comments!

I am thrilled for you — and, eventually, for all of us readers! (Torn between “all your hard work ain’t been in vain for nothing” and “those wonderful people out there in the dark” as le quote juste.) I know you’re fond of SHADOWPLAY — here are a couple of posts a propos of Norman Lloyd: https://dcairns.wordpress.com/2013/09/07/better-wed-than-dead/ and 42ND STREET https://dcairns.wordpress.com/2015/01/22/a-glass-of-water-illuminates-the-world/ HAVE A WONDERFUL TIME!

I’d read the glass article in Shadowplay (it reminds me of how someone on the pre-Code Facebook page is obsessed with one certain desk), but the Norman Lloyd as an officiant is new to me. That’s utterly delightful!

Thanks, Kellee! Can’t wait to see you too!

You and your obsession with cheese cubes 😛 I loved this! Looks like you’re in for a very good time, Danny!

Even though “The Invisible Man” is well-photographed, and I’d love to see it on a big screen, I feel that you wouldn’t miss so much not seeing it up there. Its real attraction is the screenwriting, particularly as delivered by Claude Rains. It’s even good on “as you know, Bob” sort of discussion.

I just rewatched it today (like I said, a review for the site’s coming up), and I watched the HD version for the review. It’s definitely a very gorgeous movie, and I do wish I could see an audience’s reaction to that. But there’s so much more to see!

My tips for a better Festival: Take a suit (Red Carpet!). Read ‘Invisible Man’ by Ralph Ellison. GO SEE CALAMITY JANE or your family will never forgive you.
Enjoy your trip!

If I take a suit, there won’t be any room in my suitcase for anything else! If I do end up on the red carpet, let’s hope a t-shirt that looks like a tuxedo suffices. 🙂

Danny, reading your post was totally worth the wait — it was a sheer delight, and actually had me LITERALLY laughing out loud more than once (ripping your opponent’s appendage! HAR!). Also, how cool is that about your great-grandfather and The Grim Game? And thanks for the tip about Nothing Lasts Forever — I may be kidding myself, but I’m going to try to make that one.

I’ll try too. But sleep is so wonderful sometimes…

When will “Nothing Lasts Forever” air again????? Missed it when “Brainstorm” suddenly replaced it in June 2015 line-up. This Bill Murray film should be a regular on TCM!!! Thanks!

It sounds like it was replaced this last time because of a rights issue– which I believe has been plaguing the movie since forever because it uses a ton of footage out of the old RKO library and that’s causing issues. I know the people who made it are working hard on trying to get it on blu-ray, but it’s a challenge. I saw it at TCMFF and it’s well worth seeing if you can.