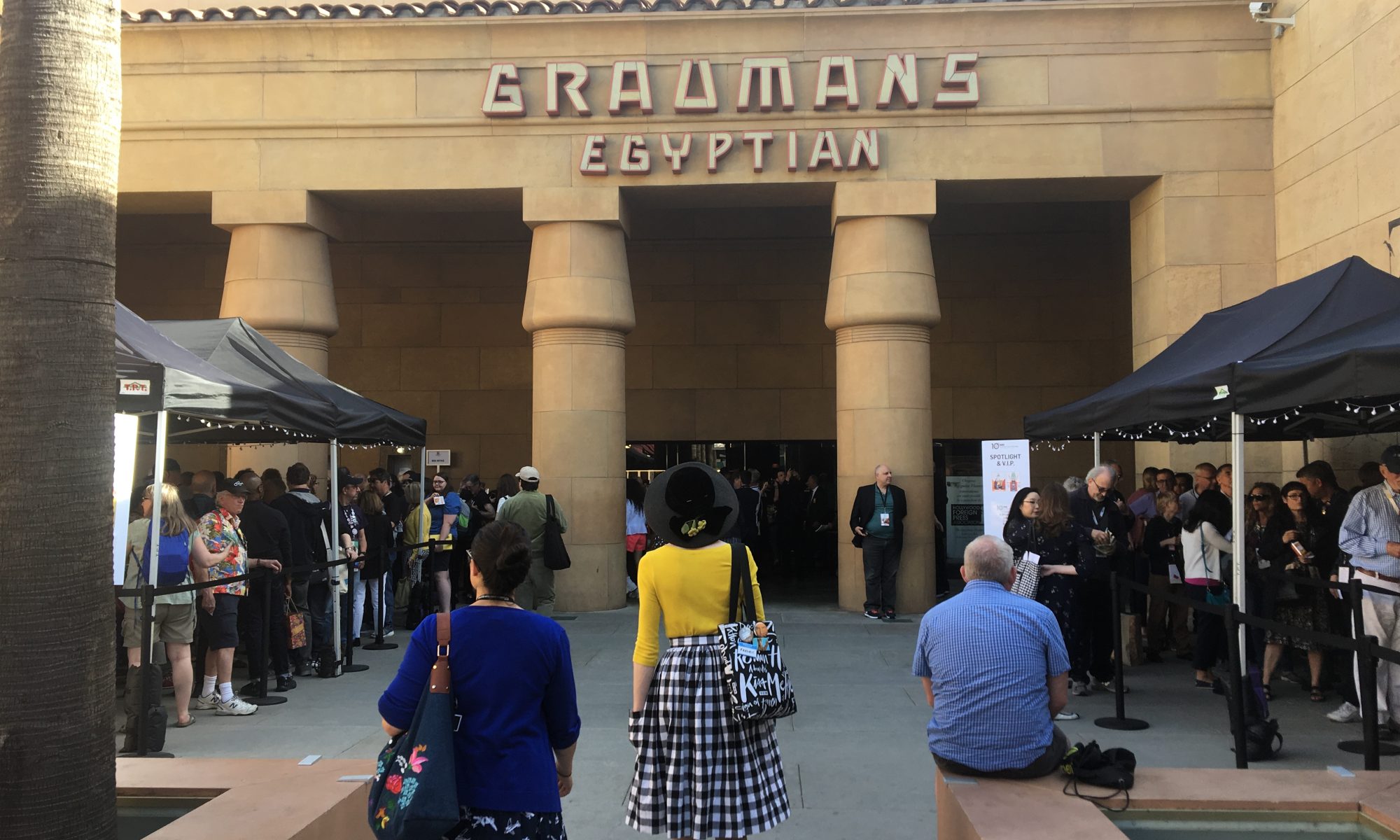 The fourth and final day of the 2019 Turner Classic Movies Classic Film Festival (TCMFF) (I’ve done this literally every day, why) arrived with a warm breeze, a blue sky, and an episode of “Frasier” to keep me sane. Luckily, my first event of the day didn’t start until a whopping 10 AM.

Any movie fan who has been to LA knows to go to Larry Edmund’s Bookshop. Filled with, as far as I can tell, just about every book about movies and stars ever made, it also has tons of posters, still and other film-centric goodies.

Fantastic time at @LarryEdmunds1 with Kevin Brownlow getting a proclamation from the City of Los Angeles thanking him for his work. #TCMFF pic.twitter.com/I7kglPfo4D

They also host talks every Sunday during TCMFF, and this year’s was too good to pass up. Cari Beauchamp and Kevin Brownlow, a pair of old friends, talked about Brownlow’s origin story and career, from his obsession with silent film strips as a boy to the arduous process of getting his book, The Parade’s Gone By, published simply because the publisher didn’t think there were many film-related books at the time because they didn’t publish any.

Frankly, I found Brownlow to be utterly inspiring. Cari talked about the ripple effect that Brownlow’s elevation of silent movie stars had on the community, and the effects of his landmark documentary Hollywood, and it’s hard to deny his importance in the classic film community. We should all strive to make the film community a better place.

He was extremely sweet, with Jeff, who owns Larry Edmund’s having to drag admirers away from him as he signed books. I’m thrilled to have my own signed copy of The Parade’s Gone By, too, and look forward to tearing into it as soon as I have a chance.

My wife spent the morning at Hello, Dolly and, miraculously, loved the movie. She especially loved Alicia Malone’s gushing introduction which converted her from “who’s that woman?” earlier in the festival to “I can’t approach her, she’s too cool!” by the closing party.

At Hollywood Love Stories in Club TCM with @IrishJayhawk66 and @CitizenScreen #TCMFF pic.twitter.com/qcSielrVt5

My wife and I decided meet back up for our only Club TCM event since Thursday, Hollywood Love Stories. Hosted by David Pierce and star Diane Baker, it was a very breezy, enjoyable whirlwind through the world of fan magazines and how they created narratives for unsuspecting celebrities. Baker both read excerpts (such as an infamous Tallulah Bankhead interview that was spent complaining how long it’d been since she’d had an affair) to her own experiences with tabloids. This included studio-mandated dates, though Baker stayed in love with her high school sweetheart her whole life.

My final film at the Legion Post for the festival was Cold Turkey. Director Norman Lear cancelled earlier in the day, and I wasn’t bothered so much, and Dave Karger’s introduction was excellent. At least I felt that way until I saw the film, as now I think some behind-the-scenes info would be most welcoming.

COLD TURKEY was hilarious and amazingly bleak. Plus: the last film role for Edward Everett Horton. No speaking lines, but… he does fart. #TCMFF pic.twitter.com/xcd9rMK6mb

Cold Turkey is a comedy about a destitute town seeking a renewal and finding it in a contest offered by a big tobacco firm: any town that pledges to give up smoking for a month wins $25 million. Dick Van Dyke leads as a priest who sees this contest as the town’s salvation, and his surefire ticket to a more appealing posting in Dearbourn, Michigan. Bob Newhart plays the tobacco company lackey who’d thought he had the perfect marketing plan, without realizing that people could subsume their desire to smoke, mostly through prostitution and violence.

It’s a really black comedy. I always love movies where the hero has a moment that they can clearly see what’s right and wrong and are presented with their last opportunity to fix things, but can’t overcome their personal flaws to do it. The film ends with about half the cast getting shot, helicopters dropping cigarettes from the sky, President Nixon showing up, and the Goodyear Blimp changing everything. It’s so great; I can’t wait to watch it again.

A Woman of Affairs

In my experience, the best way to end a TCMFF is with a silent film. I’ve done this with The Grim Game and The Phantom of the Opera, and then I was also blessed as this year’s finale was a Garbo movie (!) at the Egyptian (!!), introduced by Leonard Maltin (!!!) and Kevin Brownlow (!!!!) with a live orchestra featuring Carl Davis (!!!!!) and a new score (!!!!!!!!!). Sufficient to say, it was an experience, one of those rare moments in your life you can pinpoint witnessing something truly special.

“Garbo— she’s still elusive, isn’t she?” “As she should be.” – Leonard Maltin and Kevin Brownlow #TCMFF pic.twitter.com/PJ9mCbBYFy

While A Woman of Affairs is probably middle-pack Garbo– it just dilly-dallies a bit too much– it was gorgeous on the big screen. I was up close right near the screen (not by choice, but you know) so I looked up at the woman, in awe the entire film. This also gave me a great view of the orchestra, whom I caught watching the movie when resting.

After dinner at the Pig & Whistle with some friends, we made our way to the closing party, which is always a treat. TCM threw in cupcakes and flutes of wine to cap the celebration of their 25th year. We toasted/got toasted. And everyone said their goodbyes.

Ain’t no party like a #TCMFF closing night party cuz OH GOD ITS OVER, noooooooooo pic.twitter.com/GARn7Bx6Nh

A Mrs. R from the City of Atlanta Board of Review campaigned (basically on behalf of the state of Georgia) the PCA to push for Miriam Hopkins to play Scarlett in GONE WITH THE WIND (‘39). It doesn’t really work that way, Mrs. R. #TCMFF #TalesfromthePCA pic.twitter.com/4tOKneO4an

Here are Kevin Brownlow and Leonard Maltin just before the screening of “A Woman of Affairs” at the Egyptian tonite. 1/3 #TCMFF pic.twitter.com/7dyhpj6edp

Was shocked to find out that @PreCodeDotCom looked nothing like his profile pic :/ #TCMFF pic.twitter.com/GgrzVN9CWu

Closing night of #tcmff is always bittersweet. The joy, love and camaraderie of it all can’t be fully expressed, only *experienced.* Thank you, @tcm, for 10 years of festival fun, friendship and, of course, films. (Also my phone died so apologies for the lack of party shots!) pic.twitter.com/4PWo3eddx2

And that’s all she wrote! Stay tuned for my wrap-up later this week.