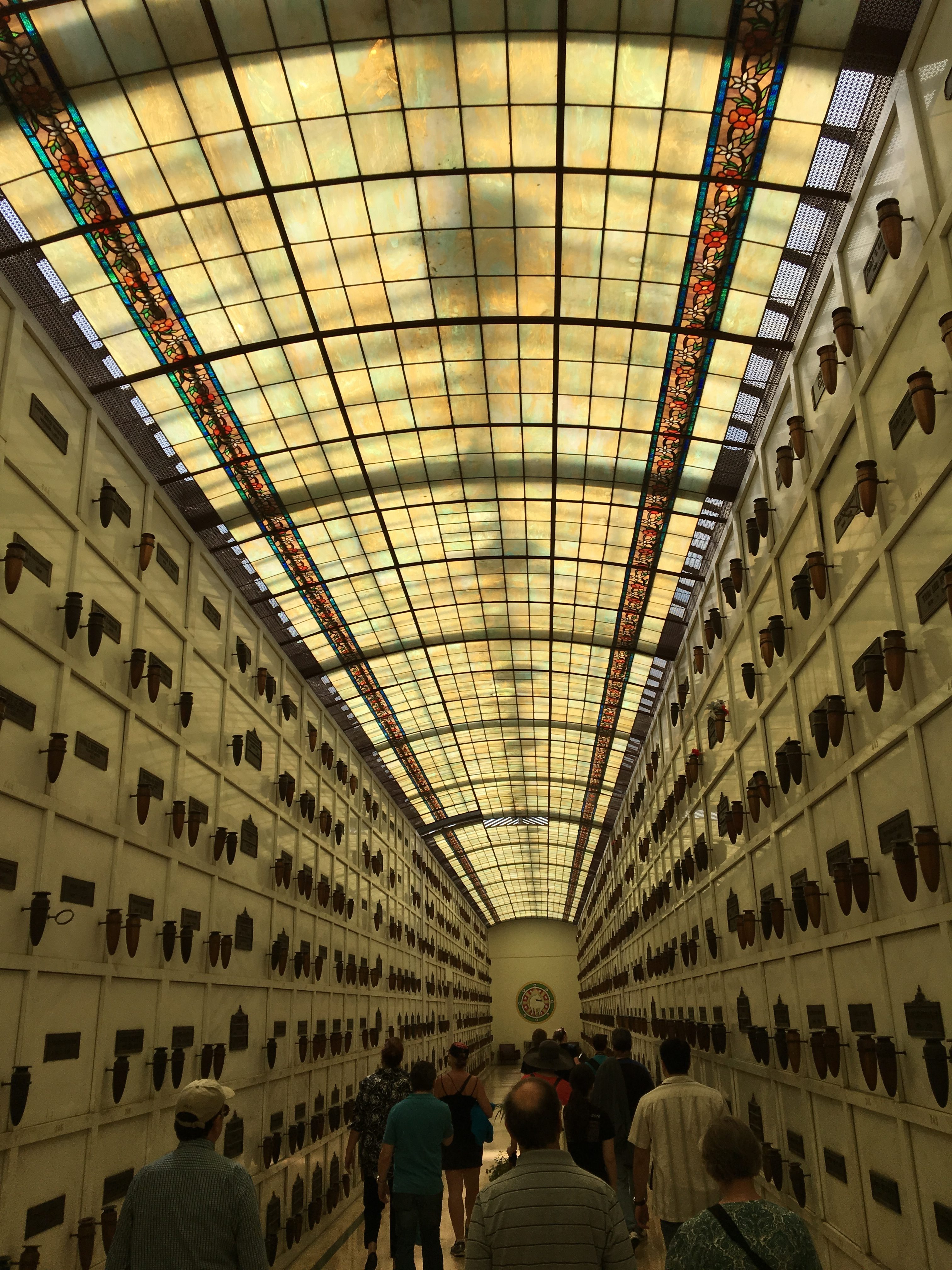 As I noted before, no press credentials for me this year. Patrons saw this content (and a bit more) last week, but I wanted to put something up here, because right now I’m gearing up for MST3k binge and I have no reviews saved, so I have to put something up. Before I get into the fest proper, here’s a list of what I did outside and around it.

Tuesday night after checking into the Magic Castle and meeting up with Lesley and Ana, we caught a ride to the Annenberg Beach House in Santa Monica. Right on the ocean, it used to be the site of William Randolph Hearst’s sprawling mansion until it fell into disrepair and was demolished. Only the original guest house and pool survived. This area was usually the home of Marion Davies’ visiting family, though we also heard that Marlene Dietrich stayed there for a bit in the early 30s, which made me happy.

At the complex, Kimberly Truhler of GlamAmour gave a fantastic presentation that covered fashion in film from the 30s to the 50s. Kimberly works at Sony and has talked about the under-discussion of film designers for years. In her presentation, she covered a few movies that were playing at the festival like Palm Beach Story and Red-Headed Woman, talked about the legendary costumers, and then showed us contemporary designers who clearly riffed on these gowns. With me not even being even remotely knowledgeable about fashion, she made a great case for knowing and understanding designers and how they helped shape the looks and attitudes of Hollywood’s Golden Age. She also made Edith Head sound like even more of a badass than usual, which was great to boot. You can read a bit more about the event and the beach house here.

The Wednesday before the festival I woke up and I’d already packed the day. So I started off, after buying a Coke at CVS, catching a Lyft with Kaci and heading to…

Nestled in Hollywood, the Hollywood Forever Cemetery is a surprisingly sumptuous (though I’m not sure I’d hit ‘tasteful’) little garden spot in the city. There’s a lake filled with swans (they’re mean, stay away), ducks (they’re loud), and the grounds are all patrolled by beautiful peacocks (seriously, don’t fuck with them).

The tour is hosted by Karie Bible, who carries a binder and a parasol as she regales you with stories of the cemetery’s seedy history and tells stories of the many famous guests there. Karie told one story about giving a tour and showing John Huston’s cracked grave stone only to turn around and find Angelica standing there. She also went deep into Marion Davies, not surprising since she occupies a massive mausoleum in a prime location.

There’s certainly an air of morbidity to it– it is a cemetery, after all. And I definitely felt inklings of guilt as others on the tour stood on the slabs of the non-famous as they listened; I guess it’s the price you pay for eternally resting next to Adolphe Menjou.

The tour was great, hitting on obscurities like Florence Lawrence and the brilliant casket that houses Douglas Fairbanks, both Junior and Senior. The grounds were gorgeous, and we were all amused by how the cemetery is used for overflow parking by Paramount since their current lot was actually originally owned by the cemetery. (At one point in the 1970s, the cemetery even tried to buy the land back, but, alas, The Godfather came out and fixed Paramount’s pressing monetary woes.)

I also found El Brendel’s grave, which I knew no one else would appreciate but me, but, hey, appreciate it I did.

Hopping a Lyft with Ana and Kaci, we raced over to the WB lot for a special VIP tour hosted by Matt Paterson from Warner Archive. The tour itself was a bit shorter than the official one, though we got to wander through the backlots and get a number of pictures in front of some famous fronts, seeing ‘that alley where Spider-Man kissed whoever in the first one’ and ‘the Gilmore Girls/Pretty Little Liars/Music Man town square’ and many more. Matt’s tour was amusingly off-the-cuff, and what really came through was his deep, abiding devotion to the shot-on-the-backlot TV show “Hart of Dixie.” Like, the passion shone through, even under all the layers of disgust.

We saw the coffeehouse from La La Land (obviously then and now not a real coffeehouse) and the swamp that was a favorite location in “Gilligan’s Island”. We also walked down the suburban street whose fake houses house writing staff for shows as diverse as “Fuller House” and “Two Broke Girls”, so some real power players there.

After we exited the lot, one of my favorite things ever happened. Matt took us around the corner from the Warner Bros. studio, opened the trunk of his car, and there were boxes of Warner Archive disks. He winked; take all you wanted. This seemed so incredibly shady, it was awesome. And I walked away with a ton of movies, many of which you will soon get reviews of, dear reader.

After that, we grabbed a cab to…

I dashed in to get my badge at the Roosevelt. Since I got the Classic Pass level, my bonus gift was a sheet of paper that listed how TCM is not liable if I’m murdered by the guy dressed as Chewbacca across the street. I don’t blame them for that.

I met up with my TCMFF pal Kristen and we talked about movies, what we’re looking forward to, and where everyone is. I also talked to Karen for a while, and she gave me a copy of Goldie, the only pre-Code Harlow film I had yet to see– and I gave her a big ol’ hug for that.

The Wednesday meetup usually dovetails into the Going to the TCM Film Festival Facebook group meetup, also by the Roosevelt pool. This year they had Barbara Rush, star of Bigger Than Life, as the guest.

And this is when I got another big thrill for the day. Two years ago, at my first TCMFF, the guest was Cora Sue Collins, who played the young Christina in Queen Christina, which I hope everyone knows is one of my favorite movies. Collins left Hollywood in the 40s, but in that time was in movies alongside Norma Shearer and she even knew Jean Harlow. I was too shy to approach her for a photograph last time, but I did this go around. She told me I was very handsome (I’ll take it!) and she insisted I get a picture of her kissing me on the cheek. I think I’m blushing in the photo. It was magical.

Oh! During this time I also ran into Megan McGurk, who was attending for the first time. I adore Megan’s podcast and book, and we argued about actresses which was a blast. Then she became the third person at the festival to be ‘my wife’ (Aubrey can’t make it down until Friday, but I’d reserved a bunch of stuff for the two of us), so I snuck her into…

There is apparently bowling alley in the Roosevelt Hotel on the second floor. It’s called The Spare Room (geez), and there was booze and stuff. And, best of all, Marya brought me a big thing of cheese, and it was wonderful.

We met up. We were social. It was fun.

The Hollywood Museum and Harlow Exhibit

Thursday morning before the Festival, I had some spare time. After listening to the latest episode of the Ticklish Business podcast, I heard a ton about the new Jean Harlow exhibit they’d set up in the Museum, which is literally right around the block from the Roosevelt in the old Max Factor Building.

I’d always assumed the museum was some crass craphole (I mean, Hollywood Blvd, hello), but it was a really cool, eclectic mix of everything. I mean, there’s the space pod from Supernova, and then there’s Mae West’s shoes. It was really cool, and the exhibit itself was breathtaking, displaying scenes from Bombshell, Harlow’s car, costumes, memorabilia, and a ton of personal items.

The big feature is the painting Harlow’s mother had her commissioned after Jean passed, “Farewell to Earth”, that was missing for decades. It’s absolutely breathtaking.

While there, I ran into Lara Gabrielle, who has been working extensively on a Marion Davies biography. She told me how Hearst fell in love with Davies when he saw her on a movie screen, which was rather touching. Lara also noticed one of the pictures in the Harlow exhibit listed ‘an unidentified woman’ and had to go to the desk and correct them– that was Marion’s sister in the picture.

It shouldn’t be much of a surprise that there’s a ton of fun stuff to do in LA for movie lovers, but I was definitely spoiled this go around. But the main event, of course, was TCMFF. More on that on Monday.