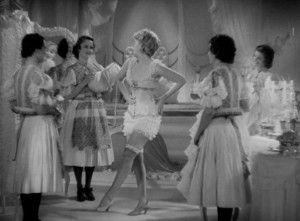 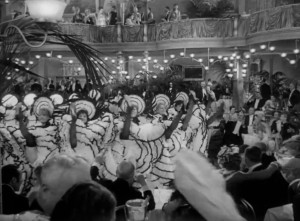 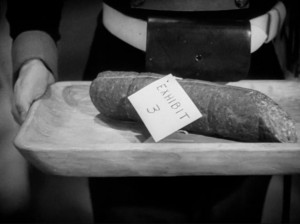 The Merry Widow: A Winsome Waltz

“Have you ever had diplomatic relations with a woman?”

The Merry Widow is an Ernst Lubitsch movie starring Jeanette MacDonald and Maurice Chevalier. You know this romantic pair– they’ve been together three times before. If you’ve watched The Love Parade or Love Me Tonight, you probably get the gist by now– Maurice swoops in to teach MacDonald the pleasantries of sex, MacDonald teaches him the wonders of monogamy, they sing and the camera looks away, as if it were blushing.

This one attempts to do much of the same, but something is missing. Ernst Lubitsch was lured away from Paramount by Metro Goldwyn Mayer to pair him again with the two singers he turned into stars. He is, of course, one of the greats. But this film may be one of the most interesting studies for film students out there– can you see the differences between Lubitsch’s Paramount musicals and this outing? The textures are different. Lubitsch away from Paramount isn’t the same Lubitsch. 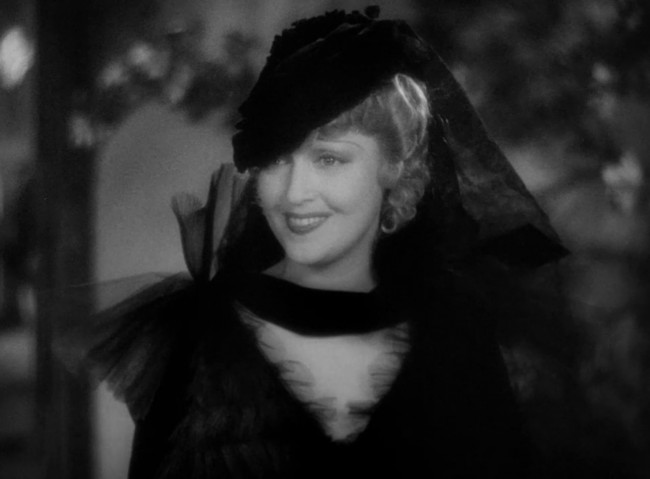 That’s not to say it’s bad, by any means– don’t scratch your head at that big green ‘Like’ up at the top. It’s just different. Lubitsch is known for his wit and delicacy, here it’s matched by some of the most lavish sets and musical sequences you may gaze upon. While he tries to liven them up, between the droning, lugubrious songs and mechanical choreography, it sometimes feel like someone lobbed a brick into a souffle.

Again, not that it’s bad. Just different. And, for some people, let’s be honest, this may be exactly their cup of tea.

I reviewed the plot a bit back at the very top, though I suppose a few more details are needed. I don’t just mean listing the supporting cast — Edward Everrett Horton! Una Merkel! George Barbier! — and then letting your imagination do the walking. MacDonald this go around is Sonia, a woman who, we find out through an amusing bit of a diary review, was married for four days and spent the next year in mourning. 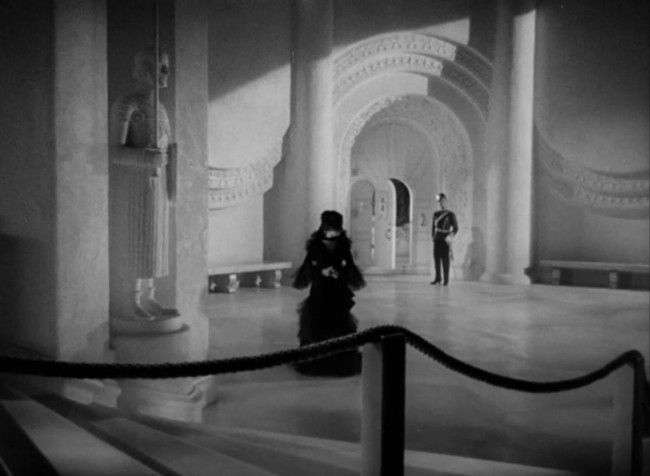 Her mourning period is broken by Danilo (Chevalier), who, having run out of every other woman in the mythical country of Marshovia (and Paris, too, as we’ll soon see), has become intrigued by the widow. However, as she wears a veil, he can only see the bottom half of her face. Can a man fall for that? Or a woman who sings quite so much?

This opening is full of wonderful little Lubitschian touches. Take Sonia’s boudoir, decked out all in white but accented by her outfits, all identically black. Though she spurns Danilo, he snaps her out of her sadness by a bit of unsuccessful wooing that still manages to reawaken her. Through graceful montage and a few fades, we watch as all of her clothes transform from dour to sleek and modern. Even her old black pup suddenly becomes white and cheery. 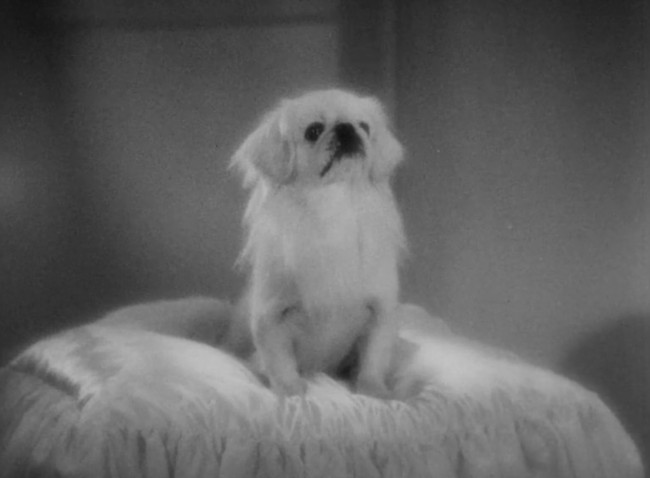 Yeah, I don’t know how that works. A brief aside– Sonia is the richest woman in Marshovia. Her newfound awakening has left the country terrified, for, if she heads to Paris and marries, more than half the country’s assets go with her. The country’s King (Barbier) realizes that there’s only one man for the job to seduce and marry Sonia– the man who he discovers in his bedroom with the queen: Danilo. The King is delighted– and horrified– but again, delighted. He quizzes Danilo to make sure he’s up to snuff:

“So you know Paris?”

“… Do you want some addresses, your majesty?”

Good enough. Danilo arrives under the express understanding that if he fails in his mission to bag Sonia– who, mind you, he doesn’t know is the woman he attempted to seduce at the beginning of the film– his death will be mercifully quick. In one rather brilliant sequence he heads to Maxim’s to enjoy his first night in Paris, and, through a series of offenses and barely closed doors, he meets the ambassador he’ll answer to, the, uh ambassador (Horton). 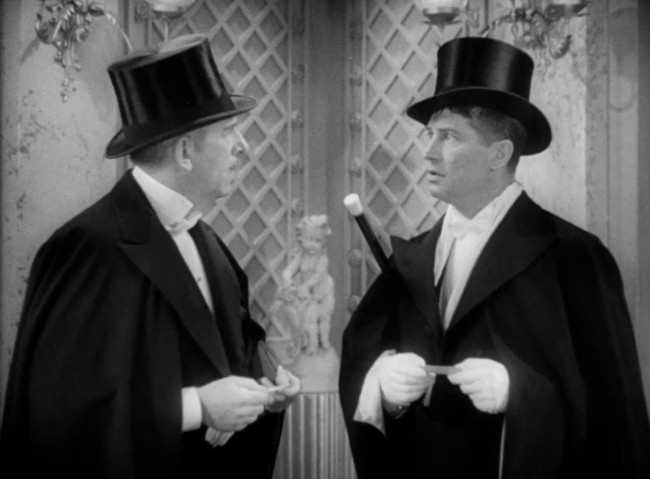 Here, Sonia has hunted Danilo down, but since he never saw her face, he mistakenly believes she is among the staff of the wink-wink-nod-nod-totally-not-a-brothel Maxim’s. She decides to mess with the cocksure (cough) Danilo by refusing his advances and flirting with other men. When he tricks her into a room and the two get close enough to kiss, she pushes back. He turns to pout that she isn’t as easy to seduce as he’s expected, she throws open the door and a cadre of prostitutes run in. (As they are apt to do when doors open.) She waves at them melodramatically:

“Here they are, all your little ‘tonight’s. And not a tomorrow among them.” 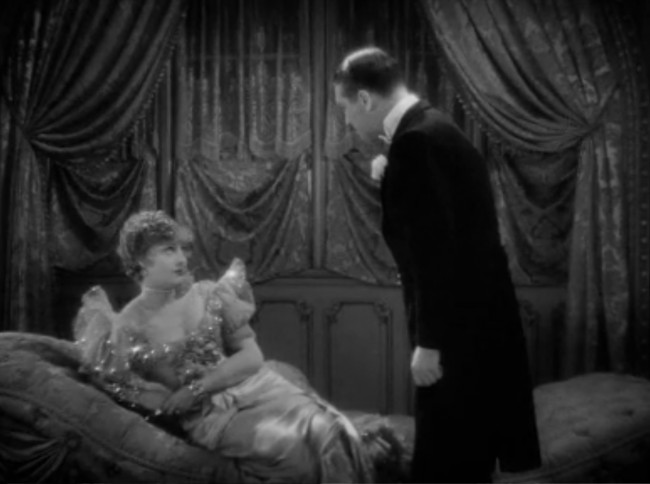 So the pieces of the battle are set by the ambassador: Sonia is invited to an extravagant ball. Danilo, who has one of the most maddening hangovers of all time, must now seduce the woman who spurned him the night before. And he must do it so that she knows that he’s not doing it under orders, but out of real, true love.

It’s that “real, true” thing I have problems with. As much as I love ye olde Hollywood magic, the romance in The Merry Widow seems perfunctory at best, smothered by a combination of Lubitsch’s wit and the elaborate musical numbers and set design. It lacks a certain intimacy, though it tries. Chevalier and MacDonald, who at this point in their careers were quite done with one another, only seem at ease when their characters are bickering. 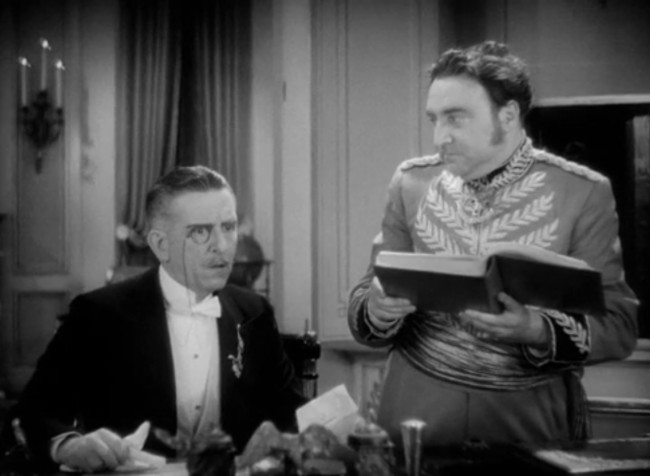 Again, not that that takes away from the movie significantly. Lubitsch’s wit makes the film, and this film is one of the last ones where he’d be allowed to wink at the audience quite so broadly. Another favorite bit: Horton’s ambassador turns play-by-play commentator on what he thinks is a seduction between Sonia and Danilo but is really a fight. Switching from the romantic couple’s argument at such a crucial moment would seem dramatic suicide, but here Lubitsch uses it once again not only wring a few laughs out of the buffoonish ambassador but to firmly remind us of the stakes. There’s always a sense of playful purpose, a need to undercut in a way that’s both funny and smart. And that’s hard to resist when it comes from such a talented cast.

The Merry Widow is a good gateway film. It’s the most polished of the Lubitsch musicals and the most gorgeous, and should give you an idea if there’s any avenues you’d like to further explore. If you like MacDonald’s singing, you can follow the rest of her career at MGM. If you like their chemistry, you can go back to the superlative Love Me Tonight and One Hour With You and dawdle there. If you just like how damned funny it is, welcome to the world of Lubitsch. Strap in.

Censors from the film industry’s Production Code Administration objected to a scene at Maxim’s in which Chevalier carries MacDonald to a couch, drops her there and then sits beside her. They only passed the scene when the stars managed to contort their bodies so she could keep both feet on the floor. That taken care of, PCA head Joseph Breen passed the film.

When the film premiered in New York City, Breen’s boss, Will Hays, and Catholic publisher Martin Quigley, one of the Production Code’s authors, were horrified at what they considered the introduction of filth into a harmless operetta. Breen had to come to New York, where he met with MGM executives and members of the Catholic church’s Legion of Decency until 2 a.m. working out cuts to tone down Count Danilo’s Casanova image and the suggestion that Maxim’s was a glorified brothel. Since the film had already been sent to distributors, each distribution office had to cut the prints itself before they could be sent to theatres. Fortunately, the studio kept all the cut material and the film was restored as censorship restrictions relaxed. 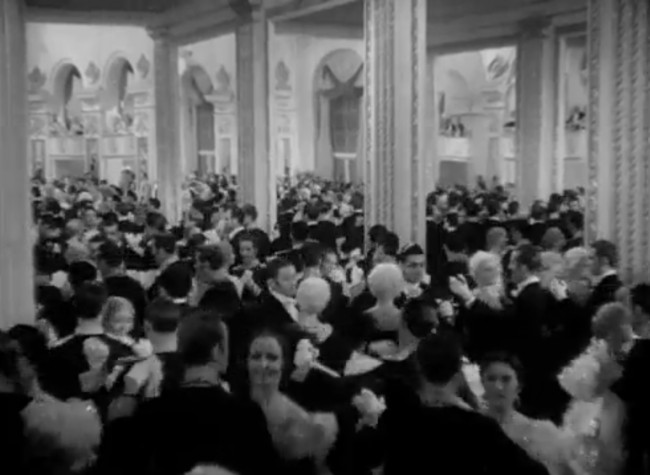 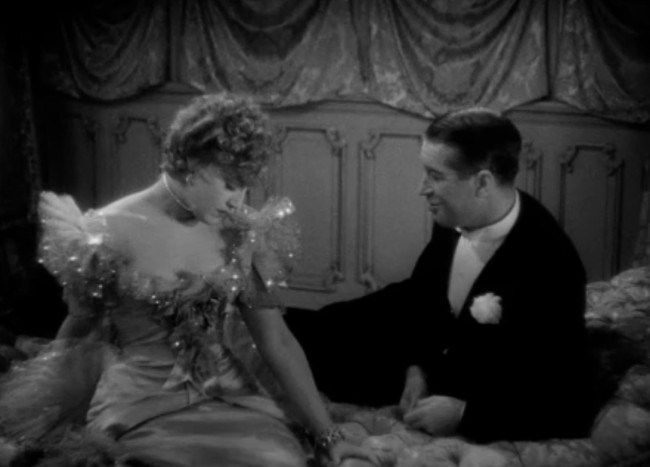 The Merry Widow is a shallow masterpiece. […] It’s only of Lubitsch that one dares ask for more. […] The Merry Widow might not be the best Lubitsch – it doesn’t quite touch our hearts – but it is the quintessential Lubitsch in that it delights the eye, the ear and the mind.

It is a good show in the excellent Lubitsch manner, heady as the foam on champagne, fragile as mist and as delicately gay as a good-natured censor will permit. Victor Leon and Leo Stein have arranged a book to suit the Lubitsch style and the songs which fall to Miss MacDonald and Mr. Chevalier have grace and wit. All of the sets are consummately lovely and a few of them are entrancing enough to persuade a Moslem that he has departed this life for the paradise promised by the Prophet.

6 Replies to “The Merry Widow (1934) Review, with Maurice Cheavalier and Jeanette MacDonald”