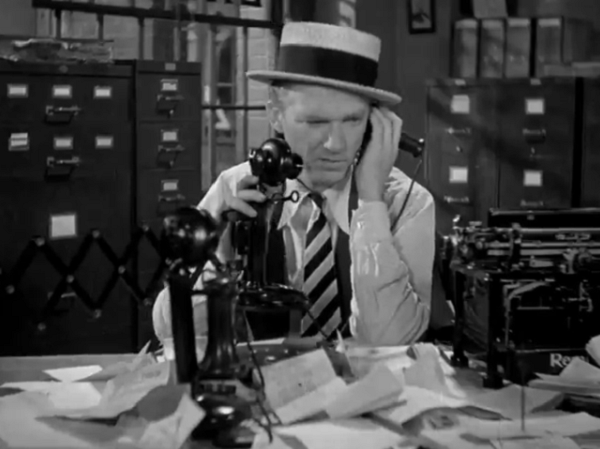 “Got any news?”
“Well, Hoover’s president.”
“Yeah, but I’ve been told to keep that quiet.”

God help me, Lee Tracy is growing on me. The motormouth Warner Brothers star whose portrayals of unrepentant reporters, grandstanding publicity agents, and general nuisances were a staple of pre-Code fast talk has finally worn down my sensibilities. Second only to Jimmy Cagney in the ‘rattling off words at the speed of sound’ department, Tracy is a one man virtuoso of the tongue, leaping run-on sentences in a single bound.

Blessed Event is a showcase for this talent, casting Tracy as Alvin Roberts, a gossip columnist who finds that dirt sells. His coup de grace is that he invents a way of indicating a pregnancy– society women ‘anticipate a blessed event’– and then becoming utterly ruthless in his quest to outboast and outbrag every other writer out there. Each column has to end with a punchline– a final kicker that sends the column into infamy.

He spends a lot of time at the office dodging libel suits with his eternally bemused secretary Miss Stevens– Ruth Donnelly is the master of the reaction shot, and she gets some plum looks of exasperation and wonder here. Also among the newspaper staff is Ned Sparks as Moxley, the columnist Alvin replaced and sent to the pet section. Moxley is a cantankerous bastard but just enjoys being such a thing. Rounding out the newspaper crew is fellow society columnist Gladys, a beautiful gal who Alvin lusts for. Even if she denounces his actions, she can’t help but love his spirit.

Alvin’s columns bring him to the attention of mobster Sam Gobel who sends a hood named Frankie to zip Alvin’s lips. Alvin thinks fast, though, and manages to intimidate Frankie into working for him. This happens in the film’s virtuoso scene where Alvin, thinking he has a piece of evidence that could put Frankie on death row, recounts in great detail every moment of an electrocution. His words completely unnerve the hardened hood, and Jenkins and Tracy play this scene fast, furious, and surprisingly funny.

Alvin’s an all around piece of work. He grows incensed when a rival newspaper runs an editorial decrying him as a ‘nadir of American journalism’. He becomes obsessed with the word (after Miss Stevens looks it up in the dictionary for him) and hails it as a personal triumph when the paper later comes to him with a generous job offer.

I’d also be remiss not to mention Alvin’s rivalry with radio crooner Bunny Harmon who had gotten him fired from a previous job. The two trade gleeful barbs, and Alvin is all too happy to say that Bunny is a little purple under the collar– so much so that my wife, watching the movie with me, wondered aloud if the bitterness may not cover a certain level of attraction.

That implication wouldn’t be too surprising since the film is bursting with blue humor, with Alvin playfully digging up dirt from bribery and from tricking the unaware. He calls up a woman in a hotel room pretending to be a detective. He orders her to send the man in the room away and she nervously obliges. He hangs up the phone and chortles, “Miss Constance Connor is back in circulation!”

This all sounds pretty silly, but Blessed Event takes its major dramatic turn straight from the Five Star Finalplaybook: Alvin is given the opportunity to not print something that could potentially ruin a woman’s life. He opts to do so anyway, starting off a chain of betrayals that squarely put him in the sights of Gobel’s thugs.

Considering the level of risque barbs that fly around the movie, it’s not too surprising that the film ends condoning Alvin’s rumor mongering rather than condemning it. The girl whose reputation Alvin destroyed, Dorothy, decides to take the law into her own hands and kill Sam Gobels. Alvin vows to use his column to paint Sam as such a rat that she’ll be seen as a hero, which is encouraged even by the moral Gladys. Even though he misused the public trust in exploiting Dorothy for a story, his determination to use his column to set things right wins her over. The moral of the story turns out to be that if you do something crappy, make sure you do something nice to make up for it!

Alvin never has to choose between Gladys and his fame, and the only thing he loses through his adventures is a small amount of respect. He’s a self made man of gumption, and once he’s learned a lesson in helping out the little guy, he’s back on his feet. It’s a Depression Era Horatio Alger story with the added bonus that the gangsters and the rich end up groveling at Alvin’s feet. That, my friends, ain’t a bad deal at all.

Later movies curbed by the Code office might introduce a supposedly heartless or corrupt hero, only to reveal that he was a sentimental softie all along: James Cagney’s Angels with Dirty Faces derives its hypocritical appeal by playing up this dichotomy. But Al Roberts in Blessed Event is never really contrite. Besides weathering the disapproval of Mary Price, Al can also slough off the protests of a young female journalism major disillusioned by his corrupt way of doing business. And he never tells his mother (the mother he lives with) what he’s up to; she thinks he’s a beloved figure.