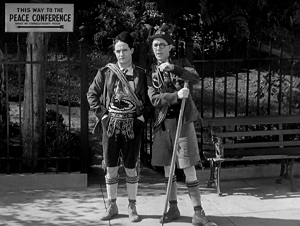 “What color do you want?”
“I want a white one!”
“White ones get dirty much quicker!”
“That’s fine, she’ll have to get dirty.”

I think it’s been a while since I’ve been so conflicted about recommending a movie.

It’s one of the funniest films I’ve seen in months.

“Are you ashamed because there’s a long sequence in blackface at the end of the movie for absolutely no reason?”

Mind you, the racial stuff you see here– Hugh Herbert is a Chinese man! — is only one level below such modern racial humor diatribes like That’s My Boy or Ted. The difference being that in Ted you can only call someone a fucking Jew/homosexual, whereas in Diplomaniacs they put on some bad makeup and horrible accent. Modern comedies are knowingly hateful; Diplomaniacs was insensitive. I guess we’ve gotten better?

Okay, I think I lost my point a bit ago. Diplomaniacs! It’s a hell of a film.

“My friends…”
“Those are fighting words!”

It stars Bert Wheeler and Robert Woolsey. Wheeler is the younger man of the two and the one who always seems to get in trouble with women. Woolsey is the older shyster of the two, with a long neck and a scheming side that stretches a mile wide. He’s usually into women too, though it usually turns out that the woman has a more dangerous desire for him.

This formula allows for a variety of plots to be hung upon it, and Dipolomaniacs is a doozy. We start with the pair, playing Willy and Hercules respectively, at the barbershop they own. Unfortunately they decided to start their business on an Indian reservation. Native Americans, not famous for their facial hair accoutrements, regard them with displeasure, until the tribe’s chief (Edwin Cooper) instructs our two bumbling barbers to head to Geneva and represent the Indians at a peace conference.

After generously accepting their offer after threats of violence derailed their plans to embezzle some dough and escape, the duo makes their way across the Atlantic. However, a scheming arms manufacturer named Winkelreid (Louis Calhern; yes, Drentino from Duck Soup) endeavors to stop them so that they won’t derail the war that will soon be bringing him wild riches.

Winkelreid decides to do a two pronged attack to foil Wheeler and Woolsey’s plans. Half involves ordering up a blonde seductress named Delores (Marjorie White) to nail Wheeler and get his instructions, while Winkelreid attempts to get Woolsey hammered and steal his money.

Wheeler and White have some spectacular chemistry. After Delores sees Willy sing a sad song while both crying and finishing his dinner, she demands more song out of him. He’s reluctant, but she insists:

He finally acquiesces (he resisted because, as he puts it, his pants were too tight), and we have one of the funniest musical numbers I’ve ever seen, as she cries “Sing to me!” and chokes him when ever he gets reluctant. The due eventually end up wrestling on the floor while they continue to belt out a semi-romantic duet, a damned effective send-up of dozens of Pre-Code romantic ballads.

Woolsey also fails at staying true to his mission, and is soon tanked beyond all reason. After being asked about letters, he responds fiercely:

However, Winkelreid only manages to delay the trip, and the duo still arrive in Paris with their mission still in hand. After being confronted by his munitions factory bosses– Poopen-Schmirtz, Schmirtzen-Poopen, Schmirtzen-Schmirtzen, and Poopen-Poopen– he decides that another femme fatale is needed. He drums up the services of Fifi (Phyllis Barry), a woman whose kiss melts men. Literally.

Fifi and Delores team up to try and take down the pair, but they’re too wily. The eventually make their way to the peace conference, only to find it as unmitigated chaos. Their peaceful overtures are seen as hostile and condescending, but are finally listened to when they point on an acrobatic routine and tell some bad jokes. I think Qadaffi tried that too at one point…

Winkelreid manages to trick them into thinking they’ve developed a lasting peace, but instead gives them a fake document. Offended by the idea that it’s been implied that a peace treaty worked, the nations of the world plunge once again into war, with Wheeler and Woolsey marching off to the front.

“I’ve got what it takes to take what they’ve got!”

The film’s overt political satire in some ways closely matches that of another and much more famous Pre-Code film, the Marx Brothers’ Duck Soup. In fact, Woolsey’s cigar habit and delight in being provocative seems to be barely a shade away from Groucho. Both are vaudevillian archetypes, with the major difference between the two that Groucho is always one step ahead of everyone, and Woolsey only thinks he is.

Wheeler doesn’t have a Marx analogue, luckily, as he’s a little bit Zeppo and a lot of femme instead (we’ll delve into that in a moment). The similarities between the groups pretty much ends there. While the Marx Brothers churned out a picture a year throughout the 1930’s and suffered their biggest flop in Duck Soup, Wheeler and Woolsey were notably different: they turned out 17 pictures from 1930 to 1934, the height of their popularity.

That makes Wheeler and Woolsey perhaps a more quintessential presence to understanding the Pre-Code aura, especially since the Marx Brothers, who have remained in the public eye for the last 80 years, have their only films surviving in their neutered, Code enforced edited versions.

Why both groups decided in 1933 to do a political satire (with the Wheeler and Woolsey film getting to the punch about six months earlier) may be because of politics or just kismet. Roosevelt’s election at the end of ’32 triggered an end to a lot of national skepticism that had built up because of the Depression, but both of these films are firmly rooted in the abject failure of Hooverism and the shadowy sense of dread that maybe the decade and a half old War to End All Wars wasn’t actually that war.

Duck Soup saw pride and nationalism as the inevitable issue with the world; Diplomaniacs sees a mixture of greedy business interests and human foibles as the planet’s undoing. Strangely, Duck Soup foresaw the short term issues, while Diplomaniacs feels much closer to poking at our current political reality.

Sure, we could have peace on earth right now. But where’s the money in that?

So I began this review talking about the ending sequence in black face (which my blogging friend TarsTarkas nicknamed “a Mammy Whammy”), and there’s a lot that can be seen here in this film’s views on people of all races.

First, the film begins on an Indian reservation. While we’re served up a feast of cliches about the all-too-serious Native Americans, the film plays with expectations a bit. First, we’re given the Chief as a man of intelligence, wit and education; he’s portrayed as the smartest and most compassionate man in the film. He is, of course, a white man in make up, but I don’t think that diminishes his character by much.

Notably we next get a big song and dance number by the Indians (again, more white people dressed to look the part), and the song, a playful tune, is actually about how shittily Indians have been treated.

This sort of even keeled lampoonery is extended to Hugh Herbert’s character, uh, Chinaman. He speaks in humorous Confucian-esque sayings that more often-than-not are used as a way to deflate Winkelreid. He eventually realizes that he’s helping the wrong team (“You can’t be on the hero’s side, you’re a villain!”) and decides to row back to China. Herbert is about as Chinese as… well, the one or two things that aren’t made in China these days, and, again, the character, while crude, is still a step or two above how any actual Caucasian is portrayed in the film.

That brings me to the last bit, the aforementioned black face. After Winkelreid detonates a bomb at the peace conference, everyone emerges covered in soot. What comes next is a lengthy musical number with the title of  “Are You Ready for Judgement Day?”. Some reviews I’ve read have remarked this this minstrel piece isn’t played for laughs in the same way as usual, as if it’s effecting a satire. I wouldn’t go that far, but the scene itself does underline the dark humor that’s coursed throughout the film. It’s reductive for it to be in black face, but it’s again showing just how brainless and gutless those men under the makeup truly are.

What’s even more shocking than the rampant racial humor is the way that Wheeler and Woolsey play with gender roles. In that clip I linked up top, you get to see them emerge from bed (with Bert in a nightgown) and Woolsey, after dressing Wheeler in a frilly nightgown, gives him a hard slap on the ass.

There’s also the matter that the men seem to have no deep attraction to women in this film. Though Delores is rambunctious and Fifi seductive, both have to chase their men, with neither ending up with the goods. Even the film’s ending, with the world on the brink of destruction, is seen as slightly upbeat as Willy wipes his brow, happy that he’s escaped Delores’s clutches.

These may be the most overt homosexual activity I’ve seen yet in the series, though, having caught a few more of their films after this one, I can say that there’s a lot more on the way.

Putting It All Together

In case I didn’t make myself clear very well in all of this description and dissection of the film (which are both a lot of fun to do), Diplomaniacs is a completely unhinged comedy that works for a deeply cheesy sense of humor. The film’s universe is one of complete comic madness, much of its humor like the film Airplane would later typify.

Wheeler and Woolsey have a splendid chemistry with neither half of the duo relegated to straight man, and all of their actions are matched handily by Marjorie White. Most of the songs are goofy fun, and it hardly lets up from start to finish.

Diplomaniacs is a fascinating time capsule, both as a forgotten cultural touchstone, a splendid satire, and for being, in spite of its racial undertones, one of the funniest movies I’ve seen.