Released only a few weeks after the enforcement of the Motion Picture Production Code in August 1934, you can see the fingerprints of the new, sanitized Hollywood all over The Girl From Missouri. A sex comedy with Jean Harlow as a rapacious gold digger isn’t new or essentially moral, but MGM did their best to make her that way. The Girl From Missouri is about a kind hearted virgin who wants a rich husband– and the only way that it seems that she’ll be manage it is by insisting time and time again, yes, she’s a gold digger, but, no, really, she’s a virgin.

This is rather notably contrasted by her best friend and sidekick Kitty (Patsy Kelly). In most earlier Jean Harlow movies, Jean would probably be in the Kitty part– a girl who is completely gaga for men in uniform, despite her friend’s protestations. Kitty leaps on butlers, porters, bellhops, and even sailors, while Jean’s Eadie patiently waits for the corpulent millionaire to finish dressing her down before she calmly reminds them of her exchange rate: one (1) virgin hotsy totsy wife for one (1) wedding ring.

This kind of currency in a woman’s virginity can feel pretty off-putting nowadays, but the movie sells it as a kind of virtue proving her purity of purpose. She isn’t satisfied with half measures, you see. She’s all in, and expects nothing less than to get the same from the millionaire she pounces upon. 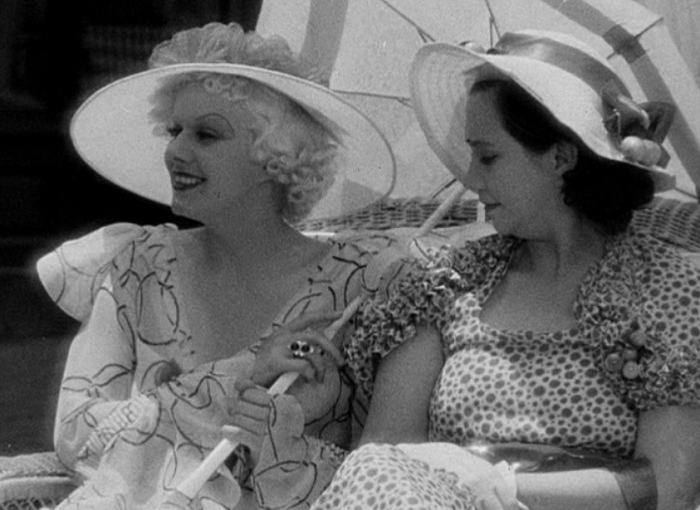 Best pals, despite all differences.

But is it sexual chastity that the millionaires want? So many movies and stories revolve around the playboy and the showgirl, she eager to please and he eager to be pleased. The transaction is often shown to be mutually beneficial as soon as the showgirl either learns not to involve emotions (as in Are You Listening?) or to completely dominate the sucker and get a ring on her finger (as in Gold Diggers of 1933). Eadie is gaming for a middle ground, though she tries to paint it a little more romantically even while she eagerly wants to keep romance out of it.

The best shot she finds towards her desired ascension into the monied is Tom Paige, Sr. (Lionel Barrymore). He’s similarly worked his way up from nothing, though it’s no surprise that it wasn’t with his looks.  He’s instead fought his way through the stuffy upper class to make a name for himself and is finally earning his reward– the chance to negotiate at a disarmament conference. And Paige Sr. is deeply horrified that a woman like Eadie is going to come in and make trouble at the hour of his greatest success.

While Eadie chases Paige Sr, his debonaire womanizer of a son, Paige Jr (Franchot Tone), sets his sights on her. And while he’s certainly more romantically receptive to her charms, she can tell exactly what he wants, and she wants to give none of it. It also hurts that Paige Jr. is genuinely predatory– his idea of a big romantic gesture is to bring Eadie back to his father’s mansion and show her the bedroom before revealing that he’s locked the two of them in. 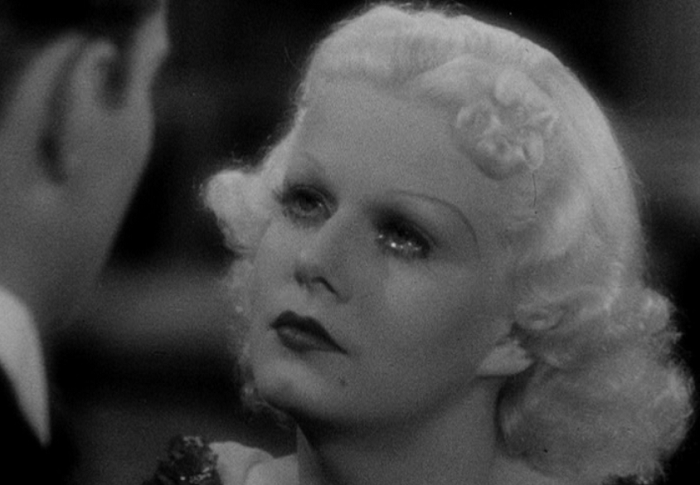 “I’d prefer not to be cheap and common. Thank you!”

This leads to the film’s big showdown– a man with a mission to sexually assault a good looking woman, and a woman desperately clinging to ‘no’ in hopes of keeping her only bargaining chip. It’s a ridiculous confrontation on one level, but heart breakingly real, too. It may be one of Harlow’s best scenes in the whole era, a desperate plea not just to escape his sexual domination but to be taken seriously. Her argument is that while he’s right, she loves him– he’s still taking advantage of her emotions. Eadie begs to be taken seriously in spite of her body and the assumptions that Paige has made because of it. Because she’s a human being, too, dammit. And it’s not exactly a situation that has lost any of its relevance, either.

Her plea manages to snap Paige Jr from his lustful machinations and for the first time realize that he’s pushing a real human around. And a virgin, too, to boot, which is still emphasized to be the important point– that part may have lost some relevance. Understanding for the first time that it’s unfair to treat a woman like a floozy, he goes to Paige Sr and tells his dad that he’s going to marry her. But pop has other plans for his son.

As much as Hold Your Man tried to turn Harlow’s sexy screen image to that of a devoted lover and mother in a 90-minute span, The Girl From Missouri is the first full ‘new and improved’ Harlow for an age of censorship. While we still get a few naughty wisecracks (including a really out-of-the-blue joke about cocaine), the transformation is complete– it’s okay for a woman to sleep her way to the top, just so long as she doesn’t do any sleeping. What’s the old joke about Doris Day? “I knew her before she was a virgin”? Fans of pre-Code Jean Harlow knew her in the same way. 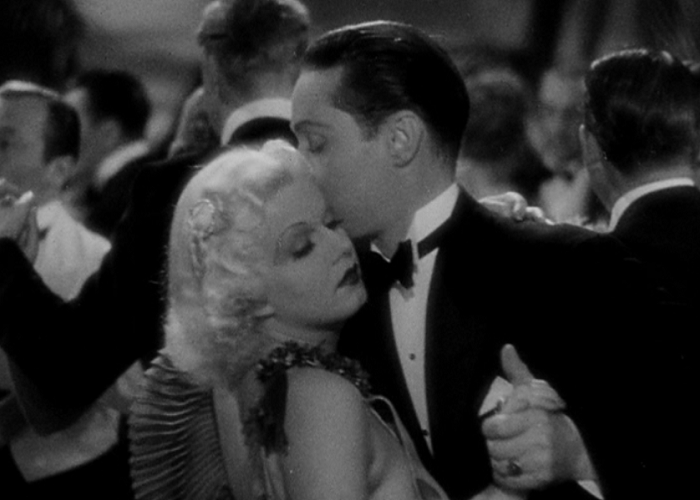 The Girl From Missouri is a fun exercise in spite of that Production Code seal that opens the film up. Franchot Tone and Lionel Barrymore rarely get a chance to play such meaty characters who are essentially good natured while also brazenly cruel and egotistical. Both see their money as leverage and both find common people to be below them. Only Eadie’s will melts their hearts and helps them see the errors of their ways.

And Jean Harlow? She’s great in The Girl From Missouri, having finally mastered screwball comedy as much as well honed the finer dramatics. Jean Harlow died three years after The Girl From Missouri was released. By that time her screen image had been thoroughly pasteurized in pictures like Suzy and Wife Versus Secretary. Did that matter to her as a person? Not so much, I gather.

But more than any other star, Jean Harlow’s screen career was a true reflection of the idea of pre-Code Hollywood. From her rough start in talkies with Hell’s Angels to clumsy turns in The Public Enemy and Iron Man, and finally her mastery of being the biggest beauty symbol the screen had ever seen in pictures like Red Dust and Red-Headed Woman, Harlow epitomized Hollywood and America’s love/hate relationship with sex. Other blonde sexbombs would come for decades afterward, but rarely would you get the chance to see them grow and change as the movies did the same thing right along with them. Harlow was the bad girl, the good girl, and, by the end, every girl. There was never anyone else like Jean Harlow, and there never will be again.

Interestingly, Missouri doesn’t rely on the old cinematic trope of mistaken identities to propel its narrative of cross-class romance — while there’s some of this at first (Harlow initially mistakes Barrymore for a waiter), truths are quickly revealed, and barriers arise not so much from misunderstandings as from sheer prejudice. While it’s not quite a classic — and its resolution comes far too quickly — TGFM remains “must see” viewing simply for Loos’ ability to distill the essence of sexual double standards into a fast-moving, enjoyable romantic comedy. 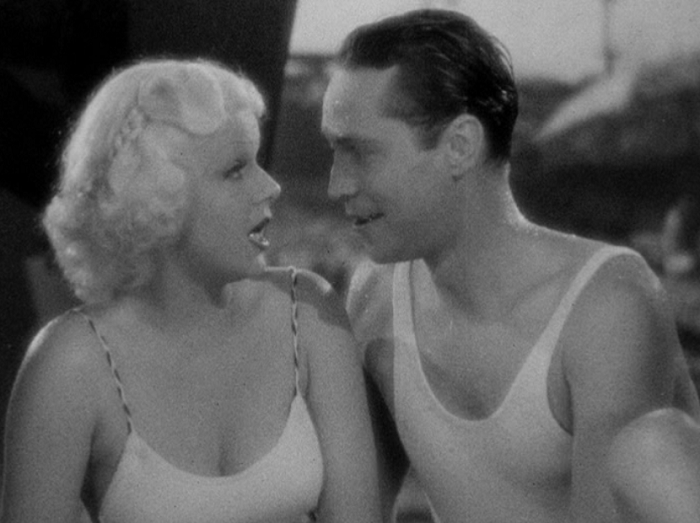 Sexual double standards include matching swimsuits– BUT WHICH ONE ARE YOU STARRING AT?

[D.W.] Griffith often called her in as a script doctor, and depended upon her to title his masterwork Intolerance (1916). But Loos’s talent went largely uncultivated until director John Emerson picked one of her scripts for a young actor named Douglas Fairbanks. The result was the highly successful His Picture in the Papers. The Loos-Emerson-Fairbanks trio was a smash, and Loos’s long, happy career was officially launched. Stars like Fairbanks, Mary Pickford, the Talmadge Sisters, Jean Harlow, and Clark Gable sought her scripts. Loos always regretted she was unable to write for her two favorite stars, James Cagney and Bette Davis, as she was under contract to MGM while they were under contract to Warner Brothers. Her classic scripts include Red-Headed Woman (1932), Hold Your Man (1933), The Girl from Missouri (1934), San Francisco (1936), Saratoga (1937), and The Women (1939).

I think that’s what I ultimately find so refreshing about Harlow and her films.  As much as I adore Marilyn Monroe, her characters were never strong-willed.  Sure Monroe had a few role where she acknowledged her ditziness, but she never transcended it.  Or if she did play a strong character there were male troubles that dominated the story more.  Here, Harlow isn’t an idiot.

Cinematographer Hal Rosson was married to Harlow during production of the film, but when the marriage ended he was replaced with the uncredited Ray June. 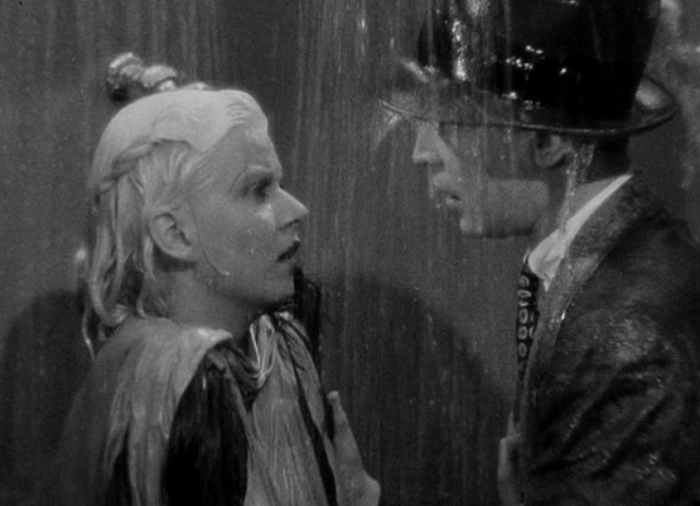 The post-Code shower scene you deserve.

While in Bombshell his character Gifford Middleton is a fake aristocrat (played with a straight face) hired to placate Lola’s longing to escape her oppresive career demands, in The Girl from Missouri the insolent T.R. Paige Jr. feels so disconcerted by Harlow’s refusal (“You can make me cheap and common like a million others but, gee, I wish you wouldn’t”), that we see literally Paige’s cynicism dismantled for good when Eadie (Harlow’s ‘hotsy totsy’ chorus girl) disarms Tone’s character using only her sincere tears

No doubt, the final (tender and arousing) scene when Paige forces Eadie into the bath stall never ceases to touch me seeing how Tone’s spoiled heir transmogrifies into a devoted Romeo under the purifying shower rain. It was really a watershed moment from his Pre-Code period, one of his most emotive performances as romantic saviour.