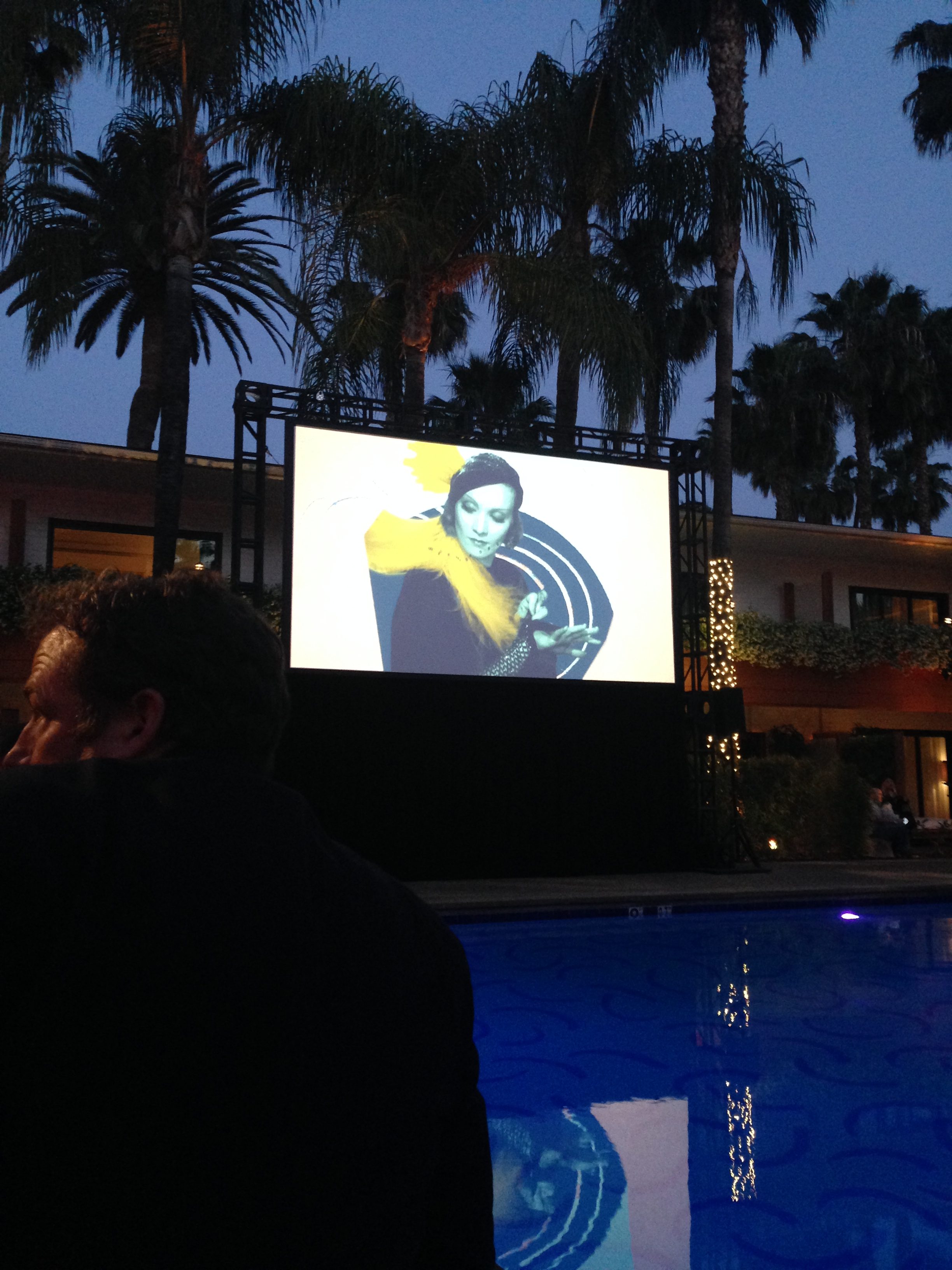 Before we begin, you can read all of my previous daily entries for this year’s festival here. These include breakdowns of what I saw and amusing bon mots that I have the delusional thought that you’ll enjoy.

– The staff. This is going to sound like sycophantic bullshit, but, honestly, the people running the lines, running the trivia, and even the bartender (we’re beard bros) are all so nice and understanding. They had a lot of difficulties to overcome, not the least of which was the fire alarm on Friday, which everyone I talked to agreed they handled superbly.

– The TCL Standees. Last year at the TCL Chinese Multiplex, there was a large area for people to record videos talking about their love of film. Some of these even ended up on the network, but let’s be truthful here—it’s hard to be emotionally raw in the middle of bustling multiplex, so it was sparsely used. This year a number of three dimensional standees were erected to put the viewers into the scene themselves. This included Pride of the Yankees, The Bandwagon, and Rocky. It’s a lot more fun and I saw some great pics come out of it. (Though why not make it so you could be in the garbage chariot from Horse Feathers with the Marxes? … I know, I know, now someone thinks of it.)

– That Shanghai Express digital restoration. Holy shit, guys. Just tell me you have Blonde Venus in queue next.

– Adding monitors to the back of Club TCM. Even though I didn’t huddle in the back corner as much as I did in 2015, this addition makes the space much more functional.

– The guests. Though I heard complaints about interviewers and being able to see people, the roster for the year was fabulous. I’m not much for celebrity spotting, but it’s great to see people like Ted Donaldson just hanging out in Club TCM and chatting with fans or to nosh a few tables down from Norman Lloyd. Even beyond the personal encounters, I saw Leonard Maltin, Angela Lansbury, Talia Shire, Elliot Gould, Rita Moreno, authors Illeana Douglas and Mark A. Vieira, the sons of both Josef von Sternberg and William Wyler, and Eddie Muller god knows how many times.  If I have to be totally honest, it was just a lot of fun.

– The midnight shows. I was kind of disappointed when they were announced since I knew Roar had already gotten some national play and Gog was being rereleased, but as someone without the opportunity to see them otherwise, this venue was ideal. If only the TCL Multiplex kept the bar open past 10:30, I mean.

– Hanging out with friends and making new ones. So one lesson I learned this year was to ask people their Twitter handle when you meet them. A number of people seemed familiar, but I didn’t place them until people started responding to my tweets. Sorry, I’m just shy and weird like that. Otherwise, jumping back into the festival was seamless (no, not seemly), and I stick by my assertion that it’s more fun to wait in line for an hour with friends you hardly get to see than just about anything else in the world.

– The ribbons and social producers. Last year there was a set of 6 collectable buttons that you could get from social producers. This year the festival reversed course and went with 27 ribbons that could be added to the bottom of your pass. How do you find ribbons? Well, theoretically the social producers—people lugging around big bags and with the letters ‘SP’ on their badge—are who to go to. Even if they don’t have them, they should know where they are, right? Well, that leads us to the first problem: some social producers have nothing to do with the ribbons and are simply generating content for TCM. Some are there to play games in line for ribbons, but all of their activities are different and not even they seem to know what one another has. I think more specificity and conformity is needed and maybe split up the social producers into different categories to help make it less confusing. If I, a person constantly connected on Twitter and who knows most of these people personally, is confused, I doubt that  And let’s be honest, buttons are better than ribbons.

– Fucking Double Harness, man. Both screenings were packed—so much so that none of the non-Spotlight pass holders past #50 for either showing. That’s an insane ratio, and it even took the TCM staffers by surprise—festival programmer Charlie Tabesh actually apologized for underestimating it on Twitter.  While I’m bummed I didn’t get in, it’s wonderful to see such a good movie get such a reception. And, hopefully, this means next year we’ll see William Powell appear in a bigger theater…

– No free booze in Club TCM. I mean, I know, but when the hotel charges you $12 for a beer poolside (which is the amount a six pack costs down the street), just the ability to get trashed at a decent rate makes things so much more financially responsible. Having a cash bar at the closing night party also stung a bit.

– The Horse Feathers restoration. I don’t think I’ve ever been in a theater before where crazy wild laughter so quickly died into concerned murmuring. But, hey, I haven’t watched a Nicholas Cage movie in a while.

– The unknown future for most of the obscure titles. My two favorite showings last year, Don’t Bet on Women and The Grim Game, still haven’t made an appearance on physical media, and have only gotten one-time-only plays on TCM. (Well, two times for Grim Game since they showed it twice on the same day.) How am I supposed to tell people to rush out and watch Pleasure Cruise or A House Divided when, well, they can’t?

– The cool shit I didn’t do because I’m lame. Look, I’m not a saint. I made mistakes this year. I’ll be punching myself in the balls for a while for missing the History of Vitaphone presentation, no doubt about that. And I’m also bummed about skipping 6 Hours to Live (I knew I shouldn’t have!) and the smell-o-vision Scent of Mystery.

And the Big Questions

I was going to do a Twitter survey for this, but I figure I can get lengthier answers out of you here. If I manage to go back to the TCMFF next year (no promises, but I’m always hopeful!), should I…

– stick with nightly updates even if that means mostly missing early screenings?

– just do a big recap post when the thing is over?

– attend all of the pre-Code showings no matter what?

– attend more of the special events?

– at least post a picture of Lassie for goodness sake?

– watch as many movies as possible?

– stop talking about other bloggers so much and focus on the movies?

– only talk about how cool and smart Kristen Sales is? (she’d like that)

– actually grab Ben Mankiewicz’s rear next time and not just mime doing it?

Let me know, I’m genuinely curious. Pre-Code.Com will be returning to its regular schedule on Friday with a review of the great Imitation of Life.

To all my friends I got to see in Hollywood,– I was talking about this last night– it’s truly amazing that we have such a wonderful opportunity, all of us, with all of our divergent interests, to meet up once a year and go crazy. I actually delayed this post by a full day because I’m having trouble admitting it’s over once again.

If you’ve never been to TCMFF, here’s my advice. Go to Facebook, join ‘Going to the TCM Classic Film Festival!’. Post about yourself and look into a few posts. If it whets your appetite and you have a Twitter account (or don’t mind getting one), look into the #TCMParty hashtag. In both of those places you’ll find some of the most devoted and sociable TCM fans out there, and they will be able to give you tons of advice about attending, from hotels to screenings. It makes things so much easier, and gives you an idea of what it’s like to be in one of the crowded, wildest places in the world with people who devoutly share your interest in these old cinematic wonders.