“You’re no criminal. Nor murderer. I’m sure I could prove that. If I want to.”

One of the fun things about watching enough movies is in finding ones that still manage to surprise you. Mind you, it may not be in a good way– case in point with today’s movie, which is earnestly ludicrous to a remarkable degree.

It’s meticulous in its setup, starting in a department store with our three main characters each purchasing one of the titular items. For Robert, a new camel coat; a sign of a new beginning, he hopes. For Dorothea, a hat, identical to one that seems to have gone missing. And for Jimmy a pair of gloves he doesn’t particularly like; he’s distracted while buying them by seeing Dorothea rush by without saying a word. Perhaps its because she was accompanied by her husband. 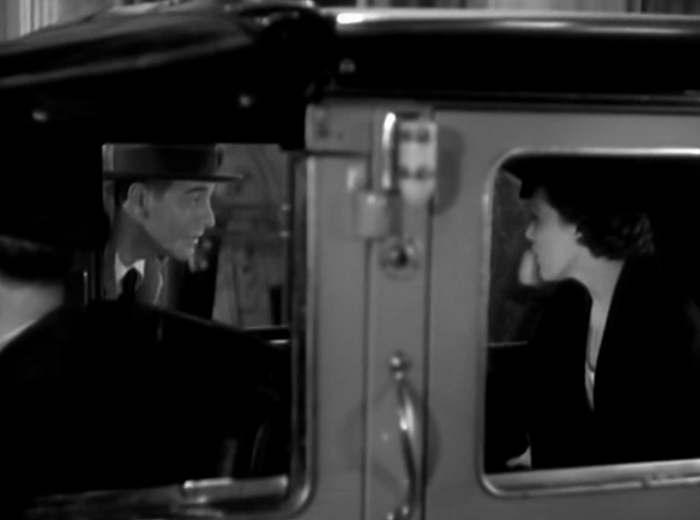 See, they’re separated. The movie clearly spells this out.

Dorothea and Robert have been separated for six weeks. He’s still deeply in love with her, and she harbors some affection for him as well. His big problem seems to be simply that he’s so meek; Robert only comes alive in the courtroom where he’s known for his antics and clever legalese. Everywhere else he’s quiet, thoughtful, and, from Dorothea’s point of view, perhaps a bit dull.

Ricardo Cortez, normally an aggressive lover or an off-kilter slime ball, plays a restrained man with remarkable grace. His Robert is quiet and introverted; you’re instantly drawn into the man’s relationship and want to know what could have possibly driven him and his receptive but evasive wife apart. The answer will only disappoint, I’m afraid.

Jimmy is a young artist– “Nobody has the right to be as young as you are,” Dorothea notes– who has one problem. An old fling keeps reappearing and demanding his time and attention. She’s Ann, played by Dorothy Burgess in a negligee, so it’s hard to believe he resists as hard as he does. 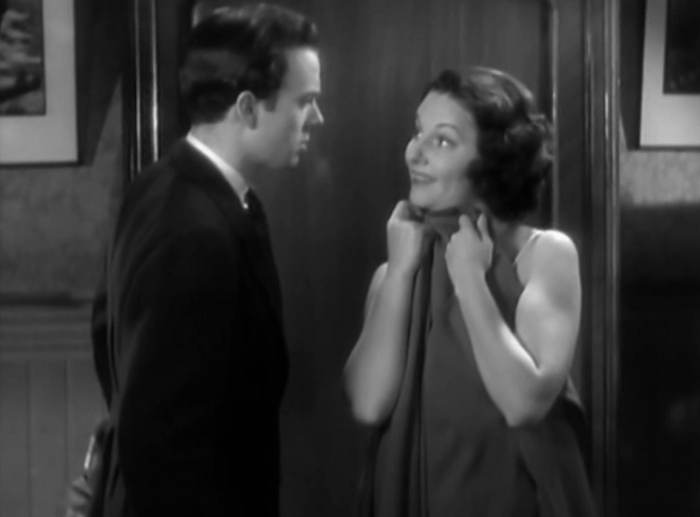 The perfect time to ask for a high five.

Robert finally snaps and decides to confront Jimmy at his apartment, only to find Ann there alone, drunk and frustrated. Burgess has a real electricity behind her performance, and her Ann tries her best to arouse Robert’s passions, only to run into a brick wall of impassivity. She pulls out a gun and offers it to Robert so that he may kill Jimmy. When he refuses, Ann dials Dorothea on the phone, intent on killing herself over the phone so that her lover’s new lover will hear it. There’s a scuffle and a gunshot and Ann is dead.

The kicker? The evidence all points at Jimmy.

For a movie that had been fairly quietly observed for its running time to this point, the switch to crime drama is hilarious. Maybe I should have known it as soon as it was mentioned that Robert was a brilliant lawyer, but the last third of the picture is devoted to an extensive trial scene, though it seems much, much longer. 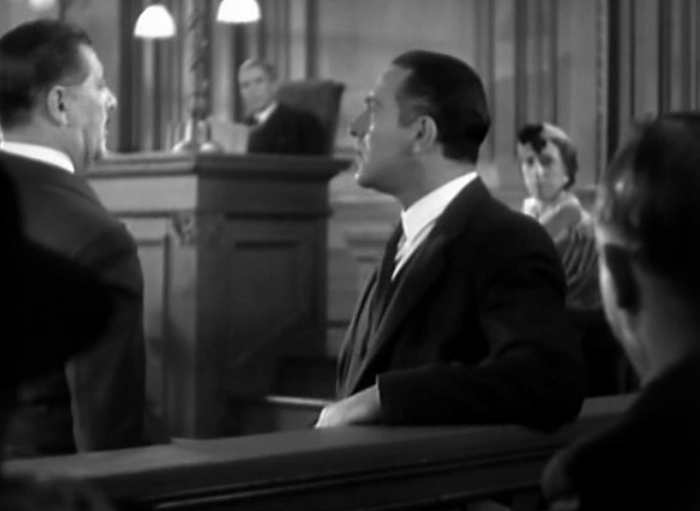 “Objection! Ricardo Cortez is too handsome to share a frame with!”

After agreeing to save Jimmy as long as he doesn’t reveal that he was with Dorothea the night of the murder, Robert takes to the defense. The prosecutions evidence? Surprise– a hat, a coat, and a glove. At least the title makes sense, I’ll give the movie that one.

Most of the tension comes from the fact that by helping Jimmy, Robert may be putting him back in Dorothea’s arms, but that never really seems to concern him. He knows he’ll get Jimmy off because, incredulously, Robert’s trial strategy is to use the fact that he committed the murder to completely discredit the prosecution’s witnesses. And it works! It fucking works!

The film’s finale finds the trio alone after Robert’s defense sets him free with no one in the court any the wiser as to who the true criminal was. Jimmy and Dorothea know, though– and Dorothea goes back to Robert because he saved Jimmy. So there’s your moral: kill your wife’s lover’s lover, prove your wife’s lover’s innocence, and your wife will be back in your arms in no time. 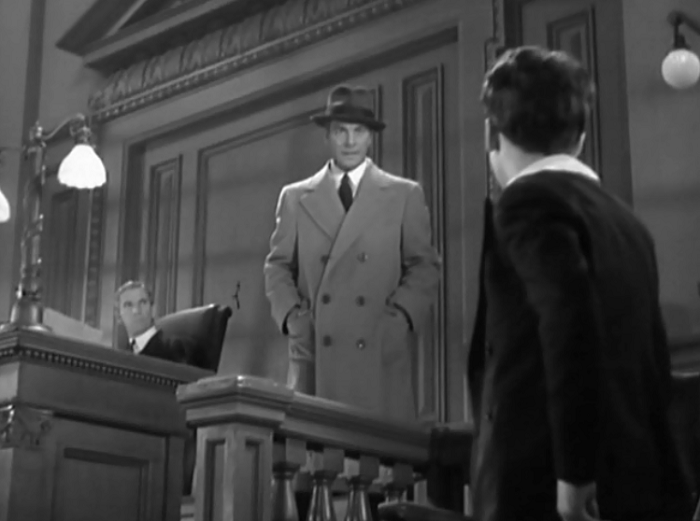 “Do you think the killer is over there? Or is he right before you? Or are The Killers on your iPod? I want the truth!”

I busted out laughing several times during Hat, Coat, and Glove, and it was never from the movie’s heavy handed comic relief. While there is some great work from Burgess and Cortez, the movie detours from his quiet, nuanced performance and insists on putting it in a gaudy trial movie that feels less like Perry Mason and more like something out of a Wheeler & Woolsey flick. There are good elements here, but the movie just can’t seem to make up its mind what to do with any of them. 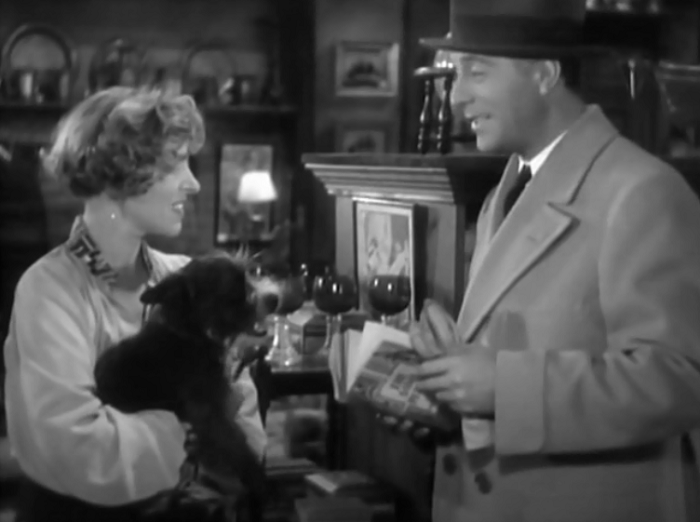 Pre-Code dog alert: the owner of a store where Jimmy sells his paintings has to take out her dog for a minute. Cortez seems perfectly amused with the little pup.

I’m starting to look forward to movies that you dislike or are indifferent to, Danny — they crack me up! Plus, you make me want to see them!! Good stuff.

Thanks Karen. Sometimes it is fun to rip into some of the dopier movies I come across, but I still feel a bit bad afterward. And truth be told that I like Ricardo Cortez way too much to hate this film!