“My head is splitting… the wine last night, the music… the delicious debauchery!” 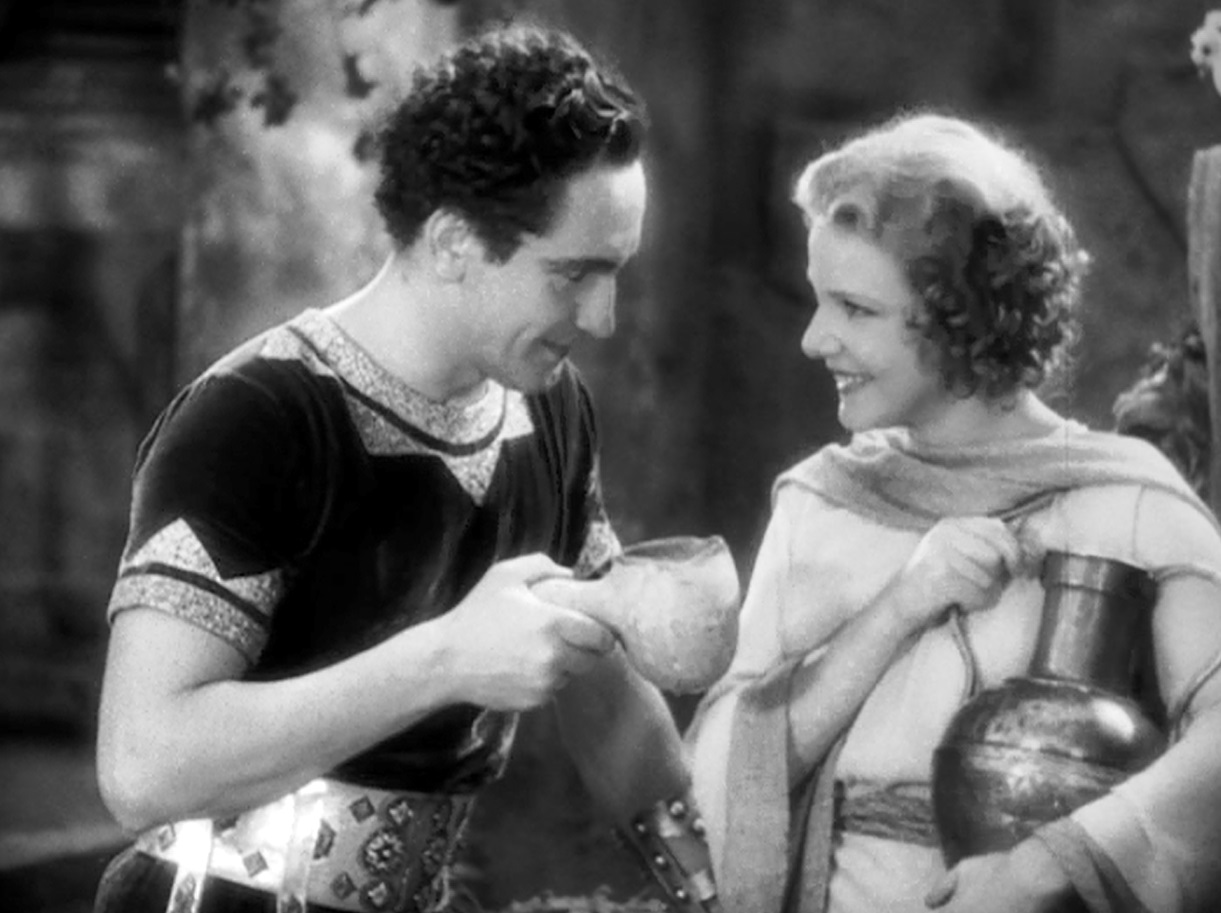 As Rome burns, Nero (Laughton) plucks his lyre strings gleefully, inspired by the chaos below. When it sounds like he may be blamed for the destruction of the city, he orders Tigellinus (Keith) to pin the blame on the city’s nascent Christian population.

Mercia (Landi) is a sweet Christian girl driven underground by this. (You can tell she is virtuous since she is the only female character in the movie who wears an outfit without a bare midriff.)  After Mercia’s guardian, Favius (Harry Beresford), is caught, she rushes to his aid. She’s met by Marcus Superbus (March), the second-in-command of the Roman Empire and suddenly very in love with Mercia. He has his own problems to contend with, mostly in regards to the Emperor’s wife, Poppaea (Colbert), who wants him in her bed, plus the scheming of his potential successor, Tigellinus, as well. 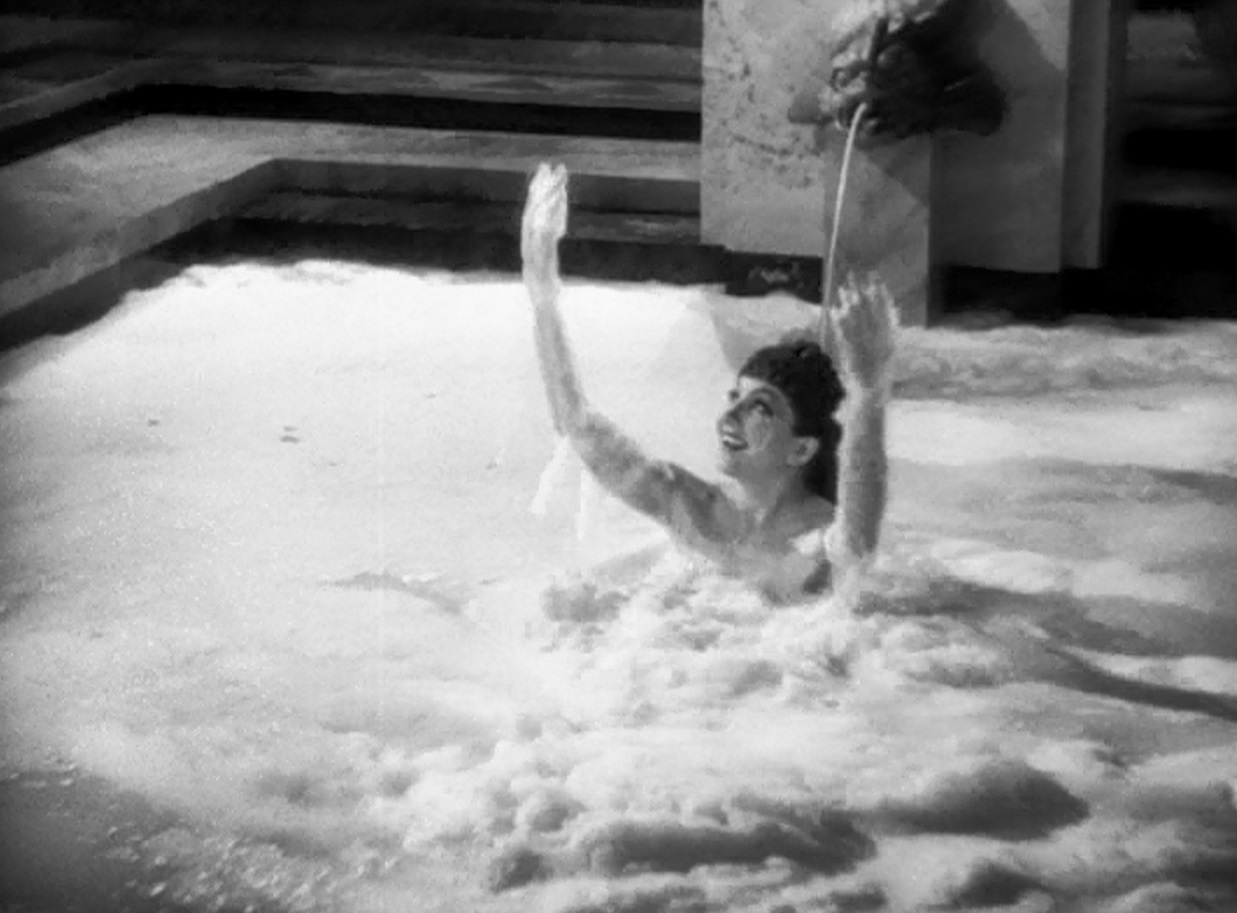 Tigellinus captures and flays Mercia’s spiritual-little brother Stephan (Tommy Conlan). (The torture is off-screen, simply punctuated by screams of pain, to let the viewer’s imagination run wild.) Tigellinus learns that Mercia and other Christians will be in the park that night for an event led by Titus (Arthur Hohl). The Romans surround the Christians and shoot arrows at most of them, saving the rest to be fed to lions at the arena. Marcus pleads for Mercia’s life, but Poppaea intervenes, dooming Mercia to the lions as well unless she forsakes her faith in Christ. Marcus is left with only a few stark options, while Mercia awaits her death.

The Sign of the Cross is a mixture of a palace intrigue drama and a litany of horrors the early Christians experienced all told with a bouncy eagerness. What director Cecil B. DeMille does masterfully here is present to us the true thoughtlessness of Roman excess. This is a culture and society that emphasizes present pleasure above all else and cruelty as its entertainment of choice. It presents Christianity as a revolution to Romans not because it is holy and correct, but because it is a philosophy that asserts that actions can have unseen consequences, that faith and virtue are awarded, and that the world is more than the pleasures of flesh and wine. 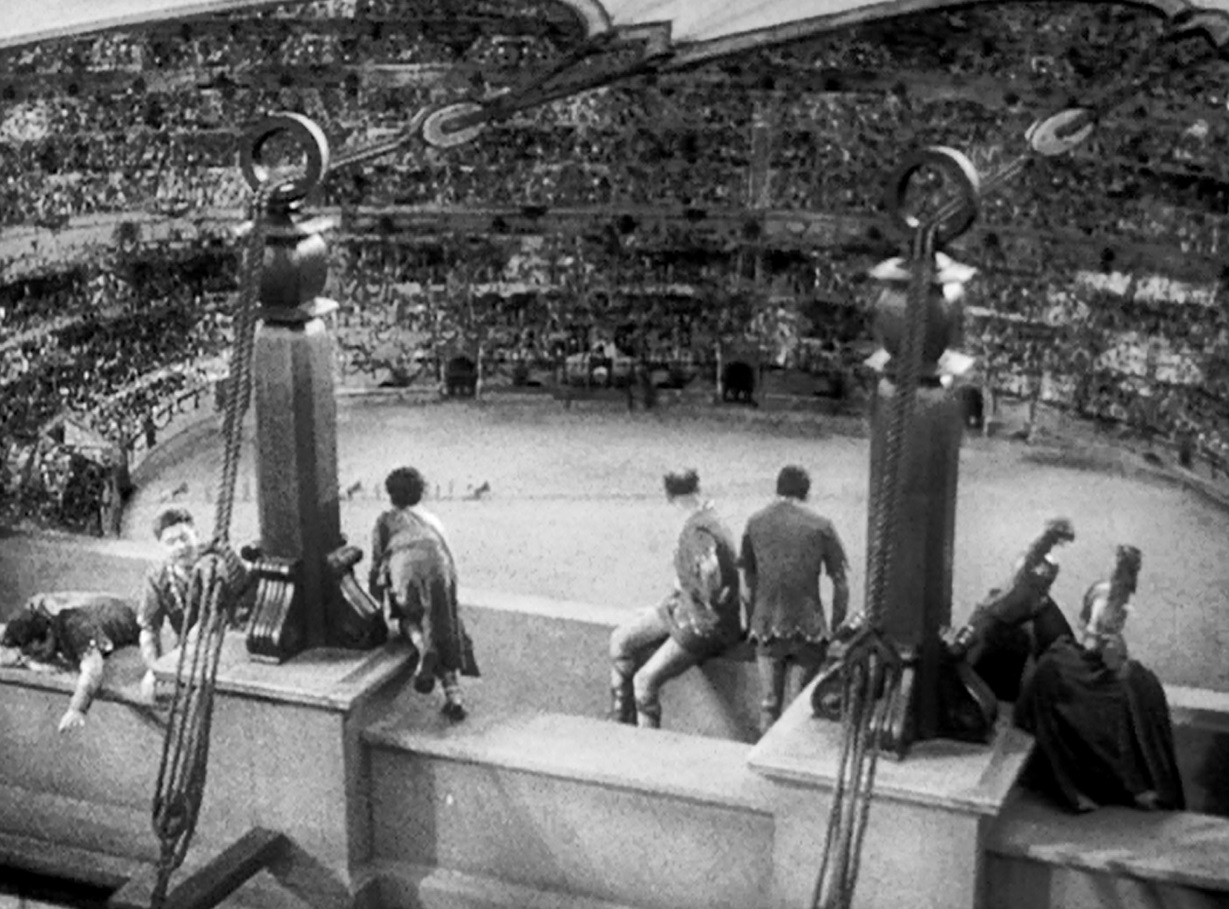 The danger of the Christians to the Romans isn’t a political one, but a philosophical one. If the people you oppress and exploit suddenly have hope, how do you reckon with this? The Romans lack an arsenal of empathy to draw from and have met the perfect foe. The plot of the film, with Nero resorting to ethnic cleansing as a way to consolidate political power and divert public imagination, remains starkly relevant even to today.

While many religious leaders objected to the film’s use of nudity and lesbianism to get viewers into the theater (more on this below), its vintage of Christianity is quietly righteous and humble. The Christians are never seen proselytizing, but trying to exist. 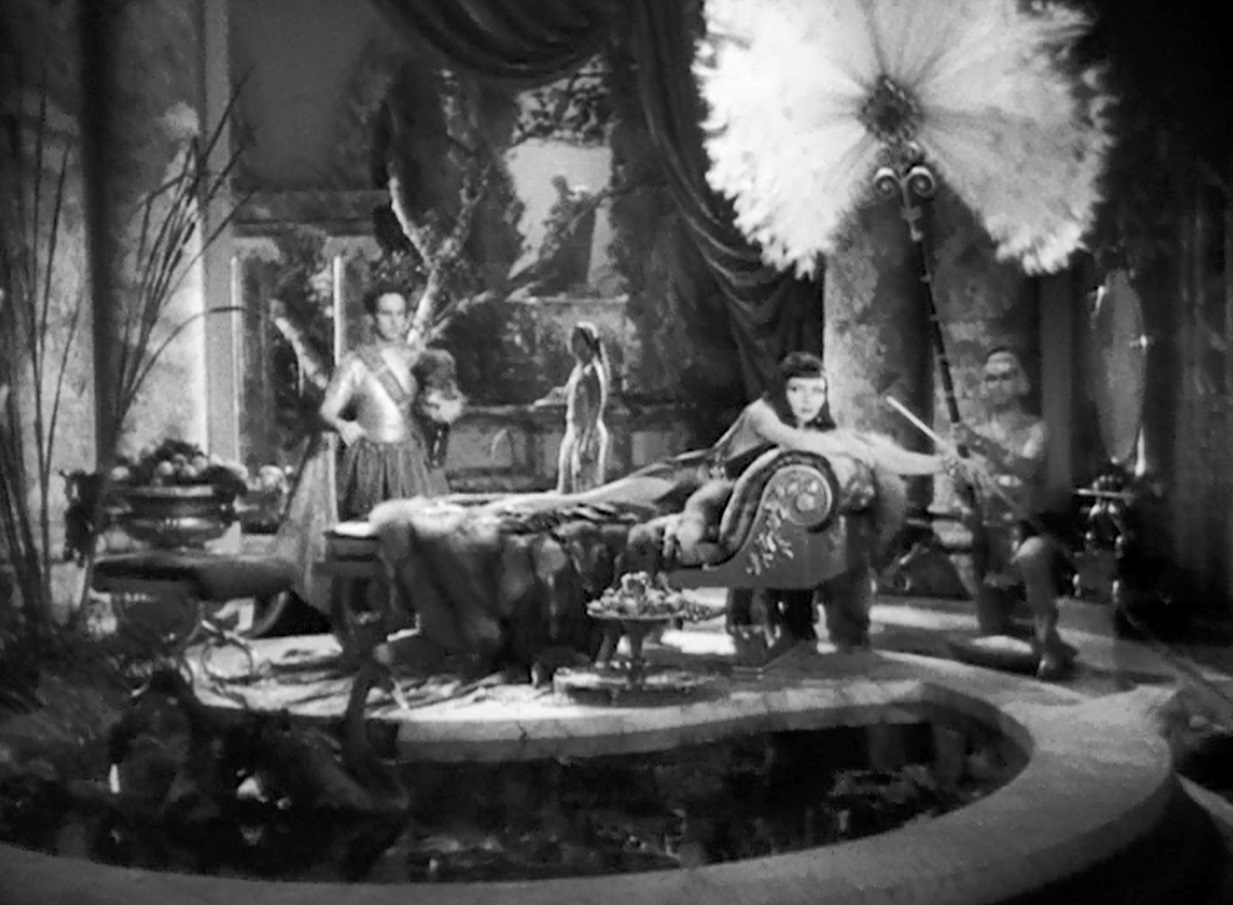 The characters in Sign of the Cross are sketched broadly, at the whim of the concentrated efforts to showcase the savagery of Rome. For March’s Superbus, this is a little frustrating, as we get little of his background or his rise to power. He’s related as a bit of a ladies’ man, but we are never really given the reason for what he finds so unique about Mercia. Elissa Landri does imbue Mercia with a noble sense of martyrdom without being wholly dull, which, considering how little color Christians are given in pictures of this type, is a bit of a relief. Though she never expresses doubts, she’s also not an unsympathetic fanatic. March and Landri lack chemistry, which sinks some of the picture’s lengthier digressions, but it’s of little consequence with the grinding horrors pushing things along.

On the other side of the coin, Laughton takes Nero and makes him corpulent and sinful to a delicious degree, a big baby who sees every one of his whims met with ease. He sucks his thumb, he lays on his throne as grotesque angles; he’s clearly a beast of corpulent mischief who only has a shred of empathy for others. Colbert’s Poppaea fluctuates throughout as either horny or angry, but always a little of both. It is more fun to be wicked, and it’s more fun to watch. Both chew on their sets and really sell the angles of the film. 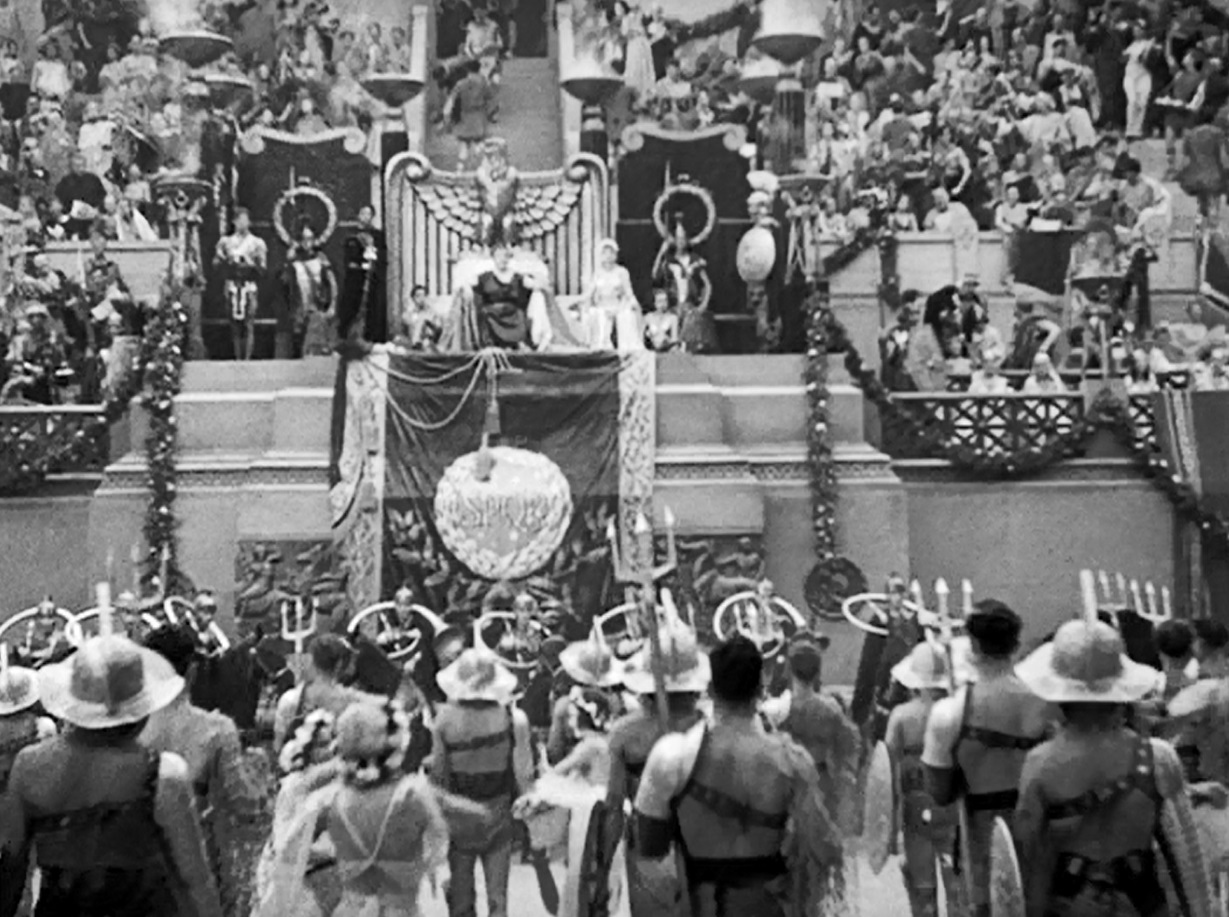 DeMille’s productions are uniquely lavish, and Sign of the Cross feels massive. Unlike a lot of other early talkies, DeMille uses not just large sets to emphasize the size of the thing, but a number of brilliant camera movements to keep the audience engaged and sublimated into this world. Take the arrival of patrons at the coliseum in the film’s second half, presented as a long unbroken shot, moving up and down the multi-story set.

This makes the large three story structure feel very real. An earlier tracking shot as Arthur Hohl arrives in Rome similarly gives depth to the action, something outright impossible to do in 1930 and impressive to see in 1932. DeMille’s ability to use the camera like this with such freedom and precision makes the movie breathe much more than its many contemporaries. 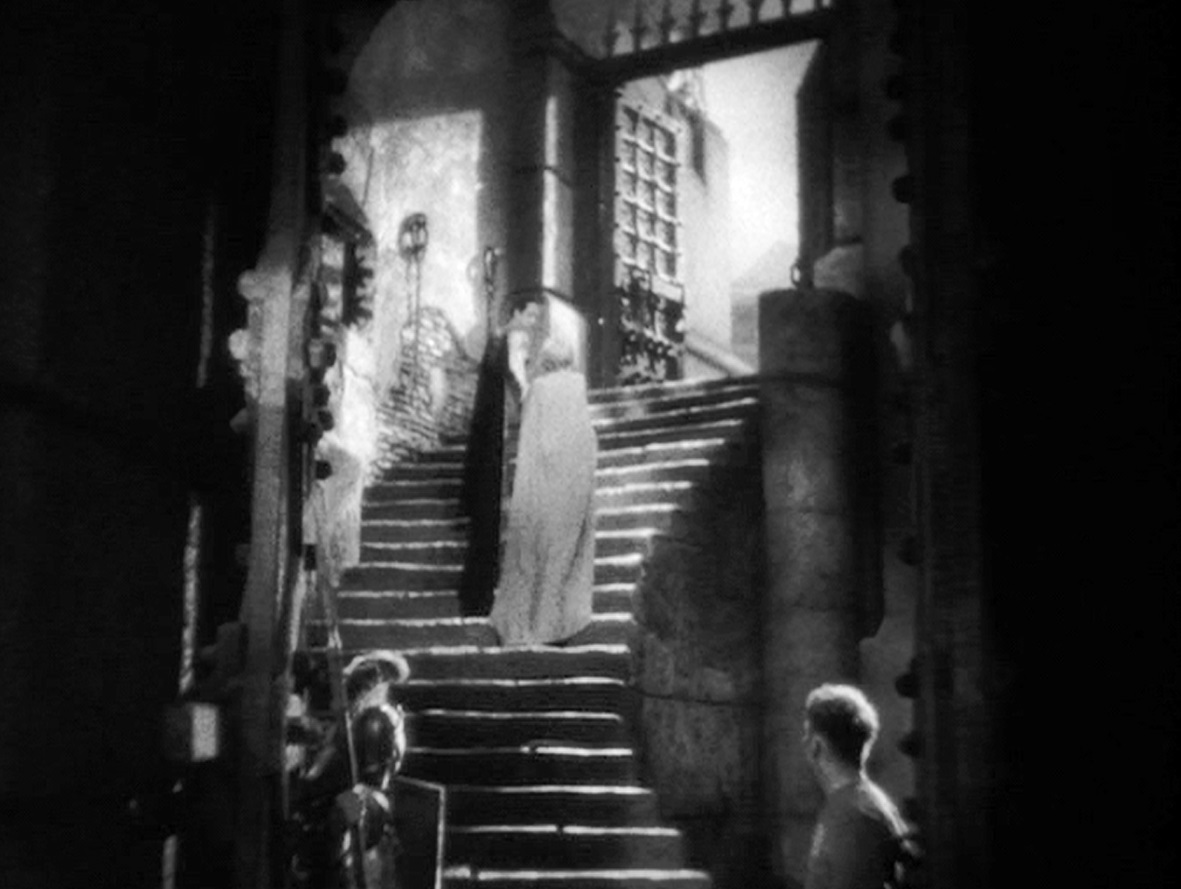 The Sign of the Cross is a memorable experience, its sequences of paganism still shocking for modern audiences who are used to more restrained, Shakespearean depictions of pre-Christian times. While many other tales of Biblical times are simple and conceited enough to say that the problem with the Romans is simply that they weren’t Christians already, Sign of the Cross really cross-references the brutality and philosophies in a way that drives home how Christianity was a radical concept then. The closest spiritual movie here may be 1979’s unhinged sleaze-fest Caligula for sheer fevered ugliness of the Roman system. (Though please do not regard that as anything approaching a recommendation for Tinto Brass’ film.)

While the film suffers from juggling its thin characters and the luxurious demands of the script, there’s no way not to marvel at the spectacle on display here. The Sign of the Cross is a beautiful movie filled with long looks at the ironies and frustrations of being human and hoping for a better world.

The Depression was in full swing, and the studio would not tolerate DeMille’s old free-spending ways. He had just $650,000 to make his epic about the mad emperor Nero, his libidinous wife, and a Roman prefect in love with a Christian girl.

DeMille set about re-assembling his old crew: production and costume designer Mitchell Leisen, editor Anne Bauchens, and assistant director Roy Burns, all at greatly reduced salaries. To save money, Leisen devised a series of miniatures and mattes in place of sets, with characters entering them through a series of full-sized ramps and steps. They had to shoot precisely head-on, because there was nothing on either side. For crowd scenes, cinematographer Karl Struss used prism lenses to make it appear as if there were twice the number of extras. Finally, in the middle of a take, Burns whispered to DeMille that all the money had been used up. The director yelled “Cut!” wrapped production, and told Bauchens to start cutting the film. Somehow, she managed to make it all work with the film that had been shot.

According to the film’s file in the MPAA/PCA Collection at the AMPAS Library, the Hays Office wanted Ancaria’s seductive dance around Mercia eliminated entirely. In his autobiography, DeMille recounts the conversation he had with Hays Office director Will H. Hays regarding the scene. After Hays asked DeMille what he was going to do about the scene, DeMille responded, “Not a damn thing.” The dance stayed in the picture.

Var reported that during World War II, because of the Allied campaign in Italy, DeMille recommended that this film be re-issued with a prologue uniting the themes of Nero and Adolf Hitler’s dictatorships. Prologue production was completed 25 Mar 1944 and reportedly cost $100,000-125,000. The re-issue came out in 1944, with a prologue lasting 8 1/2-11 minutes, according to various contemporary sources. […] According to a memo in the Code file, the 1944 version received a certificate of approval after a shot of “a robe falling out of scene, presumably leaving [a] woman naked,” was deleted. […] The prologue takes place in the present of 1944. An American B-17 bomber drops propaganda leaflets over the eternal city to inform Roman citizens that the Allies will be bombing only military stations. As they fly over Rome, two chaplains, a Protestant (Lloyd) and a Catholic (Costello), reminisce about ancient Rome and Nero’s persecution of tens of thousands of Christians. Parallels are drawn between Nero and Hitler. The final shot of the prologue is of four planes flying off into the distance. A short epilogue shows the American bombers heading back to North Africa–mission accomplished. In 1944, NYT reported that there was talk of Paramount re-editing the original Roman bath scene in which Empress Poppaea (Colbert) is immersed in 500 gallons of wild asses milk. In the original version, the cameras caught a glimpse of Colbert’s breast as she bathes. […] By 2 Apr 1944, it was decided DeMille could keep his bath scene. The NYT reported on 2 Apr 1944 that some scenes were omitted from the first version to fit the prologue, but it is unclear which scenes were cut.

Like that film, directed by Tod Browning, the hissing oceanic quality of early sound adds an extra frisson, as if the air itself is being photographed and recorded and is in its own way even thicker and more nurturing than the bottom of a dark ocean. Like DRACULA, CROSS even ends with lovers marching out of a deep cellar’s steep stone steps into the wrathful sunlight, hand in frickin’ hand.

In DRACULA it’s the still-human survivors going into the dawn after staking the count, but in CROSS it’s the reverse! It’s the doomed Christians walking to their deaths at the hands of the pagan idolators! For though Christians are ‘reverse vampires’ (drawing crosses in the sand, making them out of sticks) they’re still outsiders, the cast-offs, the lost, the elderly and fearful, the desperate for salvation, and they can be hypnotized, tricked, by any good cult leader into dying and killing and blood-drinking with alarming ease.

This is where the movie is more ambivalent than its literary source. I checked the final chapter of the novel (the whole thing is available as a Google book for free), and in the 1896 text Marcus explicitly declares his conversion to Tigellinus. There is no doubt that he dies a worshipper of Jesus. But in the film, Marcus tells Mercia, “I believe in you, not this Christ,” and even at the end says, “I can’t sing the hymn, and I shan’t look up. I’ll be looking at you and believing that you’re my wife.” DeMille’s film is a triumph not of evangelism, but of romantic love, which has in common with Christianity an imagination of eternal union. But the director’s game is such that pious audiences could leave the theater convinced of Marcus’s redemption, while more sophisticated spectators could draw different conclusions. I don’t know if DeMille could have pulled it off after the crackdown.

6 Replies to “The Sign of the Cross (1932) Review, with Fredric March and Claudette Colbert”