The thing I love most about Frank Capra’s films is how cohesive they are. The man’s pictures have a singular viewpoint that take his ideas and see how they reverberate on his selected characters. He doesn’t shy away from the humanity of the people he’s portraying in melodrama, and he isn’t afraid to poke at classism even when he’s creating his lightest comedies. He’s a craftsman, too, using sound and visuals in ways that few others tried

Take, for example, the opening of this film, an incongruous sequence where we see drunken revelers tossing bottles off alcohol off the top of a building in front of an idyllic penthouse. The rich are, as usual, essentially shitting on the poor.

The revelers at the party are more than a bit hectic, and we see drunkard Bill taking requests for paintings to be made on the bare backs of beautiful ladies. The only abstainer from this chaos is Ralph Graves, who happens to the be tenant of this penthouse. His wealthy parents have provided it to him, though he most decidedly would rather be a painter. Like a lot of faux bohemians, he envies the lower class in everything but their hunger.

Feeling particularly stick-in-the-muddy, Graves departs for a late night drive out to the suburbs. When he gets a flat, he pulls to the side of the road, only to witness a sole woman rowing her boat on a lake nearby. After observing her fixing her dress, he offers to give her a ride back to the city.

This is a predictably world weary woman named Kay, who has just escaped a party much like the one Graves had been attending, has the running mascara and broken strap on her dress to prove it. She’s worried that he’ll try to make fresh with her, but is surprised the next morning when she arrives home after napping during their trip unmolested.

Graves for his part is also impressed by Kay, who didn’t lift his wallet when the opportunity was clearly present to her. He invites her to be a model for one of his paintings, one he’s tentatively titled ‘Hope’ and portrays Kay majestically staring off into the stars. Only she can’t get the look quite right: she can’t see past the ceiling.

It’s a battle of the wills, a Pygmalion/Cinderella sort of ditty where Kay slowly transforms from trodden working girl to sterling example of morality, while Graves snaps out of his upper class stupor and begins to treat Kay as a human.

Along the way there are small battles and fights. Graves’ upper crust fiancee, Claire, pushes against Kay repeatedly. His parents are also against their courtship, especially considering that a lady of leisure isn’t the best wife you can ask for for your son. Ralph’s drunkard pal, Bill, takes a different sort of interest for Kay, taking good long looks whenever she lets him. And Kay’s best friend and co-worker Dot helps by being a confidant to Kay, even explaining that she can have her cake and eat it too– as long as there are two cakes.

The tipping point for the action is when, after a romantic interlude up in his garden, Kay finally looks at the stars in exactly the manner that Ralph wants her to. They end up staying up until three posing and painting, and when Kay is too tired to return home, she sleeps on his couch.

This is the moment where Capra lays it on thick. The two undress in parallel; will Ralph take advantage of Kay? Will he confess his love, or prove to be just like every other man and use the opportunity to take advantage of her without her consent?

Well, if you’ve made it this long, Ralph ain’t a jerk, and Kay is thrilled when a late night visit from him is merely to deliver an extra blanket on the rainy night. Capra effuses all of this with a steamy sense of eroticism crossed with quiet unease. At breakfast the next morning, both are forced to confess their feelings after Kay’s attempt to break the tension by tossing toast in her mouth grows incredibly pathetic.

His parents aren’t fans of this turn of events, and as is required in this plot, Mrs. Strong is deemed to come in and explain to Kay that a marriage to her son would ruin his reputation and by extension his faux bohemian life. Kay acquiesces, despite Dot’s best objections, and decides to run away to Cuba with Bill. Dot rushes to get Ralph, but will she make it in time?

It’s almost inconsequential, actually, in the way it plays out. Capra’s deft hand actually brings some tension to this tired story, though even his many skills aren’t enough to save the film. Clunky with a number of early talkie foibles, the film was made a few years before the technology behind it could be used flawlessly. As it is, there are plenty of bad models, bad dubbing, and bad acting.

Chief among those in that last category is leading man Jerry Strong, who has the presence of a concrete brick. His failure to add any subtlety to his role is to the film’s severe detriment, making the love affair one sided.

It helps that Capra seems to know this as well, as most of the film comes from Kay’s reactions and emotional turmoil. Stanwyck, in her fourth role, is molded perfectly here, exhibiting all of the toughness and tenderness that she would demonstrate time and time again over the next fifty years. This performance is a great success on both of their behalfs.

The supporting cast is also quite delightful, with Bill and Dot being silly but human in their needs and beliefs. Bill’s carnality and Dot’s cravings make for nice background gags, and both payoff wonderfully in an era where foreshadowing was rarely employed. Ralph’s parents even get bits of humanity to them as well, showing that they’re not needlessly cruel, but only desperate for their son to come around to their point of view.

Ladies of Leisure comes from a lot of similar stories from that era, and could almost be seen as a combo between Shopworn and The Song of Songs, both about a woman fallen from grace being rescued by love. This story was popular with Depression-era audiences because of the transgressive nature of the love affair, where wealth and love were only a few steps away from the hellhole you were trapped in. This is pretty much underline and bolded as soon as Ralph starts molding Kay into representing ‘Hope’, which, after some growth, she does.

The film’s craft helps set it above others. The literate script by Jo Swerling plays with viewpoints and characters, avoiding stagey complications often. He imbues the tragedy with some ironies; Ralph’s family’s last name of Strong would seem to be a misnomer here, much like in the completely unrelated film Christopher Strong; rather than being a representative of strength, they are weak and scared.

I wish I liked this movie more, and the commentary track on the DVD can help with its appreciation, but it’s such an old story that I’ve seen done better elsewhere. The film also sags in its 100 minute run time, often reemphasizing points its made before without a need to. All things considered, Stanwyck shines, and Capra has got some great moves, but both went on to do much better. 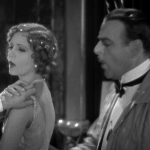 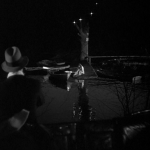 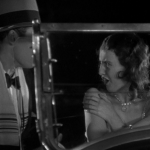 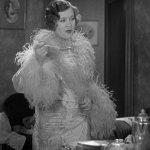 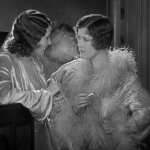 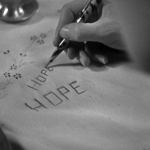 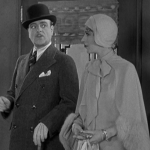 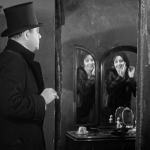 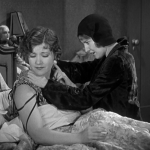 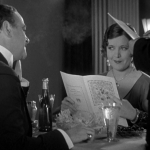 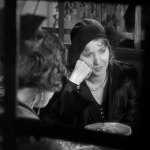 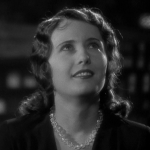 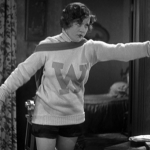 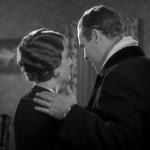 When Kay turns up to model for Jerry, he insists on taking off her brassy make-up – this is a powerful scene, as it is both him showing his mastery over her and him stripping away her mask to find what is underneath all the defences she has built up. It’s also intimate because it involves him touching her – but, despite this, it becomes clear that, at first anyway, he isn’t really interested in her as a woman and doesn’t see her as anything more than an element in his painting. He offers to buy her a dress, but she indignantly asserts her independence by buying it herself.

Capra had never worked with sophisticated dialogue…at the dawn of talking pictures, who had? The script for Ladies of Leisure was courtesy of Jo Swerling, one of the hoards of newspapermen who went Hollywood after The Jazz Singer hit. Swerling threw out many (but unfortunately not all) of the sentimental “weeper” elements and added jazzy lingo and a hard-boiled attitude. Elizabeth Kendall points out that the heroine is a new kind of Cinderella. “Kay is no slum flower: she’s an opportunist. Living off men is her job. Swerling’s script has given her a cynicism that is surprisingly gritty even to us today.”

The fact remains that the photoplay is a searching portrayal of a type of metropolitan girl known as a “gold-digger” and stands quite alone for its amusing dialogue, the restrained performances of nearly all the players and a general lightness of handling hat commends the direction of Frank Capra.

14 Replies to “Ladies of Leisure (1930) Review, with Barbara Stanwyck”