Somewhere in Sonora: Guilt and Innocence

“Don’t worry about me, I’ve always been a lucky sort of a cuss.”

Of all the Warner Bros. B-Westerns that John Wayne took part in in the early 30s, this may be the most strange– it’s contemporary, but nearly indistinguishable from all the period peaces. It goes one direction then swerves several times. I couldn’t have guessed the ending if I’d tried, and I’m not sure I’d have liked the result if I’d found out. Regardless, Somewhere in Sonora is a nice little oddity, though the comic relief is unceasing and unyielding.

Let’s get to that weird plot. A pair of women– one a native, the other a naive Easterner– arrive in sleepy Sonora just in time for a rodeo (pronounced “ro-day-o”, as we’re assured repeatedly). There cowhand John Bishop races a stagecoach. When his opponent’s rig falls apart, he’s arrested on… well, no specific reason other than the most circumstantial of circumstantial evidence. Knowing he’s innocent, his kindly boss, Bob Leadly, helps break him out of jail. To pay him back, John agrees to ride south and discover what happened to Leadly’s son who may have gotten mixed in with a bad group after he, too, was falsely accused of a crime. 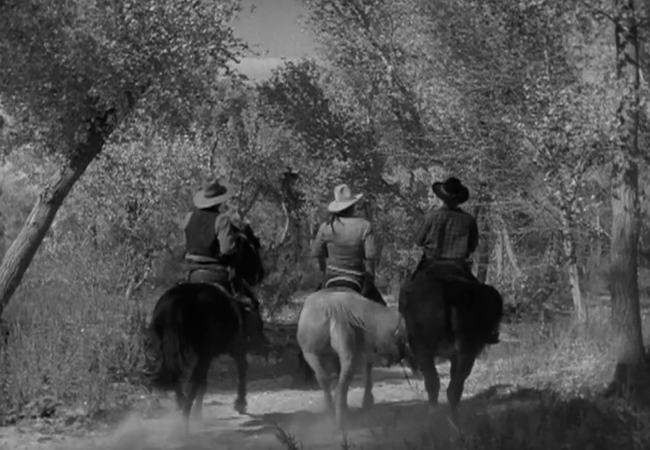 That may sound straightforward, but it’s bizarre. This movie feels surprisingly expansive, including a town manned by one of the girls’ father who runs it with a smile. It’s being terrorized by that bad group, led by a villain named Monte Black. The father relates, “I’ve taken every precaution. For example, there’s the warning bell!” And, gosh darn it, can you believe it, that actually comes in handy a couple of times.

Like the other B-Westerns Warner was making at the time, this one is a remake of a silent film, and you get the sense that several other bits were pasted on to fill out the meager running time. While not as dull as a few of the other misfires, the comic relief here– “relief” is probably a misnomer– makes this one of the easier entries to skip.

Low budget quickies like this don’t have the reputation they deserve. They were often a lot more entertaining and adventurous than the big studio offerings of the day. Things that signify realism today, like filming on location instead of a studio set, happened routinely and just watching Mary and Patsy drive in a real car on a real road instead of in front of a rear-projection screen, gives the movie a more modern-day feel. The short running time also enables a movie that operates almost exclusively on action instead of backstory. These movies were meant to entertain the masses and entertain they did.