They Call It Dull, Too

“You can’t build your happiness on someone else’s unhappiness!”

They Call It Sin begins much like your classic traveling salesman joke. Experienced huckster Jimmie comes to town, meets a pretty girl, and neglects to tell her about his other woman. Luckily that dainty young girl is Marion and is played by Loretta Young, so it’s not too far to guess that things will work out for her.

Anyone who’s wanted the camera to check out Loretta Young from head to toe, here’s your movie.
(Click for big)

She’s the young organist at the church in town, and Jimmie he wants Young to play his organ too. After her parents reveal that they’re not really her parents and that she’s actually the daughter of a scandalous performer, Young sees this as a sign and sweeps into New York to surprise her beau.

Jimmie is surprised, as is his fiancee, Enid. Jimmie’s friend Tony steps in and offers to escort Marion around town as interference, but she soon decides to try and make it on her own as a song writer. She ends up in a talent agency with Dixie, and they charm the pants off talent agent Mr. Humphries. Humphries is satisfied with being the only person sans pants, but Marion won’t give in.

Jimmie soon resurfaces, and Marion gets tempted back into his orbit. But Jimmie and Humphries clash, and after a rather unfortunate push, it looks like Jimmie might get the wrap… for murder.

They Call It Sin is a pretty bland movie outside of Una Merkel’s fun Dixie (here’s a nice piece about Merkel I read recently) and the way it treats Marion.

The film is behind Marion’s character the entire way. It’s fun since she doesn’t hesitate to embrace her dream to be a songwriter. With the testy Dixie on her side (“Are you going to be one of those dames that crumples up when the first man in her life marries someone else?”), she forges her own path until the utterly ridiculous climax. 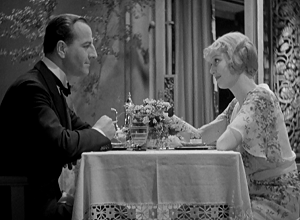 Humphries and Jimmie are both unrepentant bastards, and both get their comeuppance. Mind you, murder is a little harsh for Humphries, but Jimmie’s realization that he missed out on a great thing and lost a woman’s love with his own selfishness is pretty satisfying.

Of course, there’s still something weird with the movie, and that’s how Tony ends up with Marion. He offers himself to her early on in the film and she turns him down, as she doesn’t really like him that way. Later, after the murder, he performs an operation (he’s a doctor, by the way) that proves that Marion had nothing to do in that whole climactic murder.

Next we see Tony and Marion, they’re snuggling up to each other, which just goes to show if you ever prove someone innocent of murder, they must marry you. Valuable life lesson.

Agreed. Crazy ending! Still a fairly watchable pre-code film despite the flaws though.

Amusing review, and I’m with Michael–amusing film until the last 15 minutes, when it takes decidedly stupid turns. Humphries’ death scene, in particular, is unintentionally hilarious, and they needed to spend a minute or two setting up Tony’s charms if he’s going to end up the groom. I’d call it “80 minutes of guilt-free fun” and 18 minutes of wry audience superiority.

I remember really liking this film. Loretta Young is great in it. I do remember the ending being silly that she ends up with the Tony character of all people. But then he is a doctor! I do like how Loretta morphs from sweet organist in the country town church into the smart New York city girl.