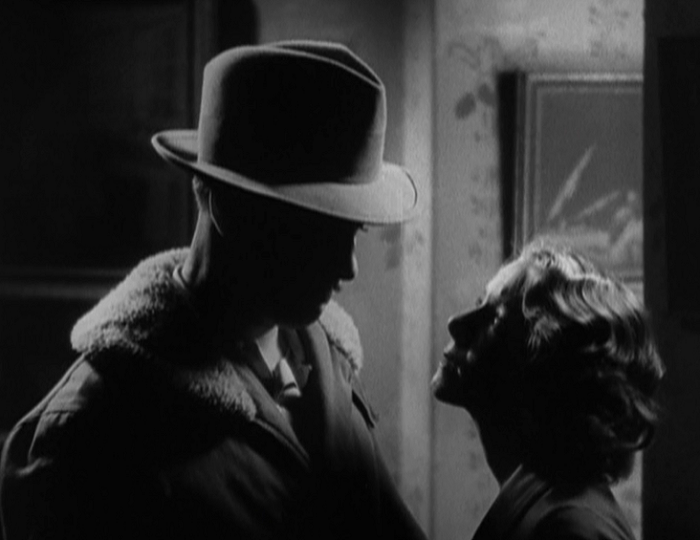 Arrowsmith: Of Romance, Morality, and Passion

“We are scientists. That is more than a man.”

Life’s not easy. I don’t have to tell you this, I’m sure you’ve figured it out by now. Some of you reading this right now have the chance and opportunity to do what you want with your life, while many others among you simply do what you must.

Finding that balance is one of the core ideas in Arrowsmith, John Ford’s 1931 adaptation of the Sinclair Lewis novel about an idealistic doctor. The man, Dr. Martin Arrowsmith, wants to be a researcher, telling his mentor, Dr. Gottlieb, that he intends to be the man to cure cancer. And while it would have been great if he had done it, life intervened.

Martin meets an insolent nurse scrubbing the floors, and after her backtalk piques his interest, he is soon swooning. She’s Leora (Helen Hayes), and after a quick dinner (including the William Tell Overture as romantic background fodder), the two see a judge and they’re married. Since a research scientist doesn’t make enough to raise a family, they head to Leora’s home town and he opens a private practice. 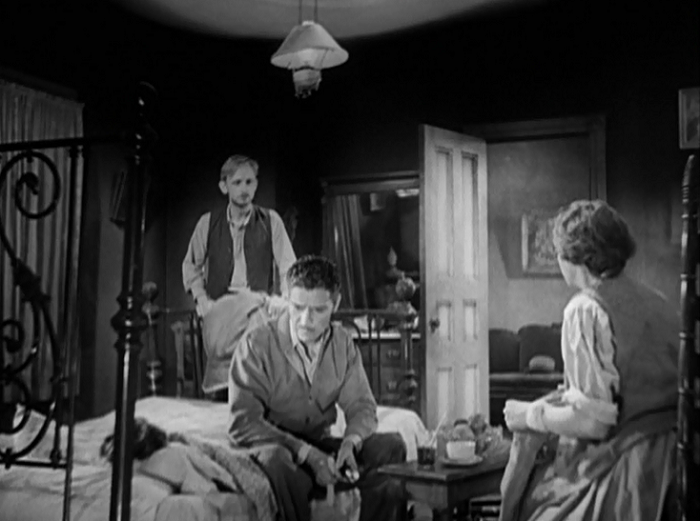 Dr. Arrowsmith treats a young girl whose life hangs in the balance.

Things don’t go well. Arrowsmith is fine as a doctor, but meek and shaky. He gets along with kids and the townsfolk fine, but he’s out of his element. When his involvement in crafting a cow vaccine prevents him from being present when his wife has a miscarriage, the couple decides to shed their small town life and meet up with Gottlieb in New York City.

There Arrowsmith again struggles until he stumbles on a formula that kills bacteria. The eager management of his institution tries to make a sensational news story out of it until it’s found that someone in France has stumbled upon the same serum. He’s devastated, until he learns of an outbreak of the bubonic plague in the West Indies that could be the perfect testing ground for his serum.

Leora sneakily tags along, but plague-ridden islands turn out to be dangerous. At the behest of his scientific colleagues, Arrowsmith makes one demand for the use of his serum: it can only be distributed to 50% of the population, with the rest treated as a control group. The white doctors revolt, but a native doctor, Dr. Marchand, accepts these terms, and the two set up camp on a remote island.

Side note: Marchand’s portrayal here as a black doctor without the hit of racial stereotyping is considered incredibly progressive for the time. Considering the fate that he receives and his relative lack of characterization, though, it’s more inoffensive than progressive.

With Marchand and his friend Dr. Sondelius, Arrowsmith heads off to a remote island, leaving Leora where it will be safe. Not many are going to come back alive, and as the prayers and cries fill the night, all of Arrowsmith’s reserves of morality and scientific thought are going to be tested. 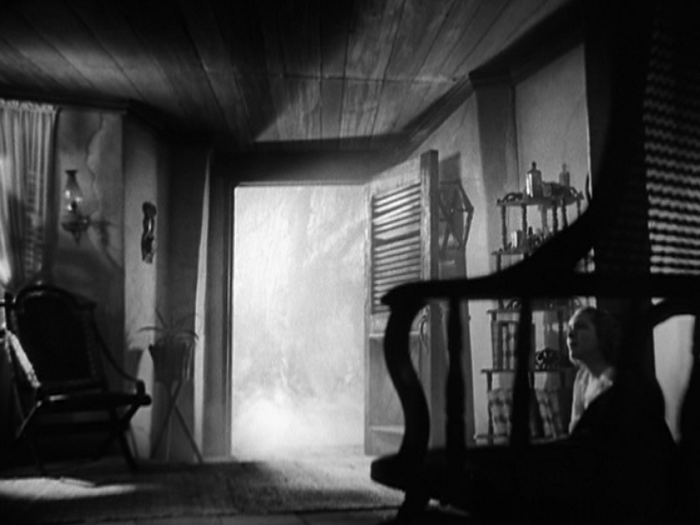 If all of that sounds like an overwhelming amount of plot, it is. Heck, I even skimmed the details of a few portions as well. One of the pleasures of Pre-Code film making is that it was more often packed to the gills than stretched out incessantly, and this film is an ambitious adaptation of a lengthy novel.

This is messy, but it makes for one of those fascinating movies that puts questions in front of the audience and never offers easy solutions. The film’s main point of tension arises from Arrowsmith’s desire to stick with the scientific method in the field, a practice that either condemns half the population to sure death or one that saves them from an even worse experience from a cure with a toxic side effect.

As a dramatic device it’s effective, but it’s interesting to see something as impermeable as the scientific method used for a treatise on morality. Is the ‘better safe than sorry’ method worth it when people are dying every day? And at what point do you sacrifice what you believe for what appears to be morally right? 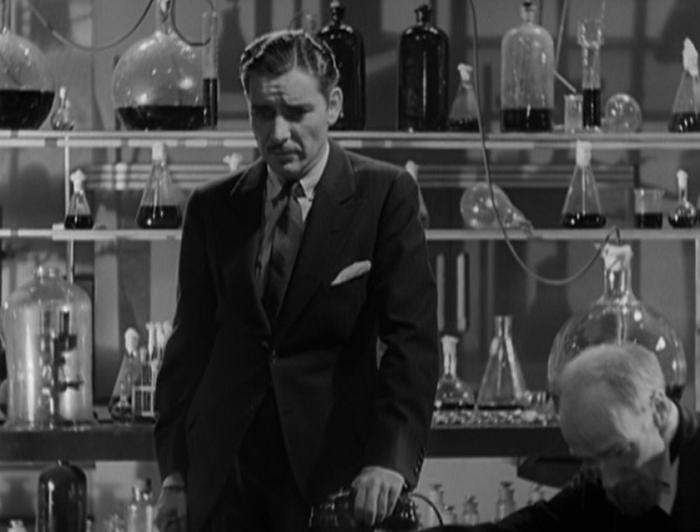 Morality. Don’t talk to me about morality.

This plays into the film’s larger theme about bridging romance and passion. Arrowsmith’s courtship of Leora is almost antiseptic in many ways, with the two never seeming to connect on a level deeper than devotion. Yes, they believe in each other and have faith, staying good companions, but it’s lacking something primal. Leora and Arrowsmith’s wedding, performed at a courthouse by an indifferent clerk, is the epitome of bottom-of-the-barrel romance.

These feelings are contrasted by not only Arrowsmith’s love and devotion to science, but, later in the film, to a beautiful woman he meets in the depths of the jungle. That’s a woman from New York named Joyce who is trapped on a plague-ridden plantation in the Indies. Her pale skin stands in a stark contrast, and its evident from the glances exchanged that it isn’t just the mass of death that’s putting a weight in their stomachs.

One of the most brilliant sequences involves Joyce’s seduction of the straight laced Arrowsmith. Played against silence we have the following:

That last shot, with her shadow under the door, leads to a fade out. The next morning, both are in robes, and they share a look. That’s the extent of their infidelity, plain and simple.

Ford has a great ability to use the actors faces in ways that not only express how they feel, but how they don’t. Few directors feel comfortable allowing characters to face away from the screen for long periods of time, but Ford constantly breaks that rule, simply allowing one character’s personality the chance to dominate the screen. Sometimes, it’s not even that: it can be all shadows and darkness while two characters begin to talk, and we can figure out the emotions from the body language and voices. The obfuscation here says as much as the faces would otherwise.

It doesn’t help that the characters here are nuanced creatures who continuously try their best only to come up short. One memorable moment is Arrowsmith’s credo as he undertakes his scientific research:

That’s fairly racy for the time at the end there, but reinforces the film’s inherent institutional skepticism. God is tricky, the government is intrusive and restrictive against innovation, private enterprise is money obsessed and exploitative, and science demands an impossible rigor. As Arrowsmith tries to stake out his own glory against these forces, its easy to see why his soul is slowly being chipped away at. 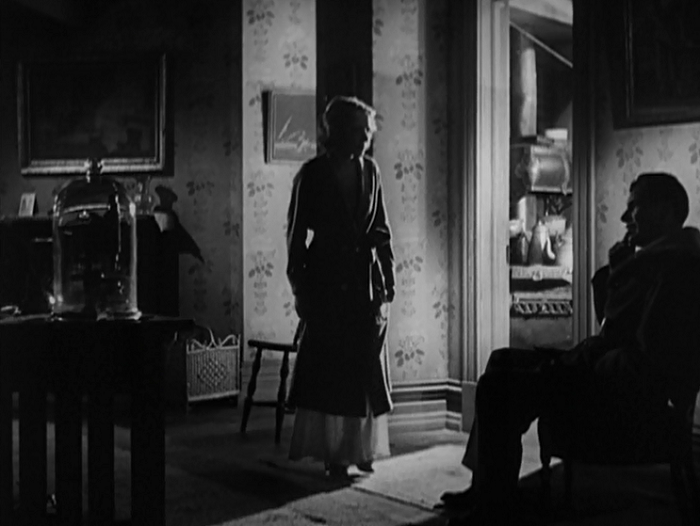 This scene is wonderful visual geometry, as we see Arrowsmith on the right longing for his research career (the microscope on the left) with his wife coming directly in between them.

Arrowsmith is a messy film, but one I think benefits from that messiness. It’s overambitious and luscious, filled with wry observations and a sincere desire to help its title character find the right path, whatever that may be. If it veers too close to real life to be a great film, that’s not something I’m willing to fault it for. 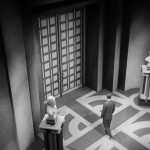 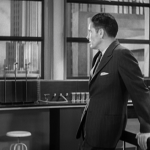 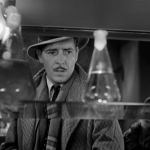 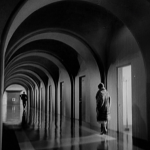 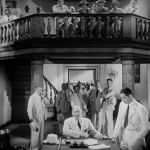 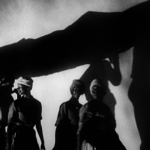 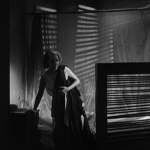 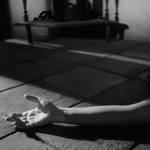 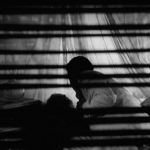 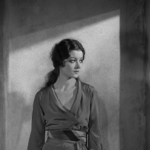 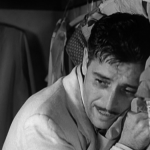 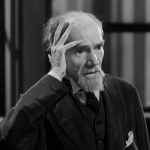 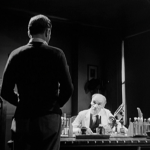 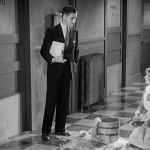 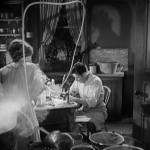 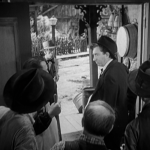 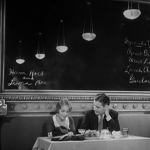 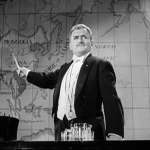 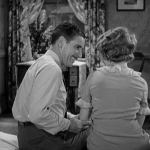 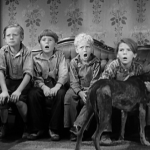 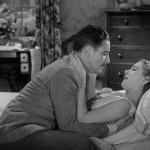 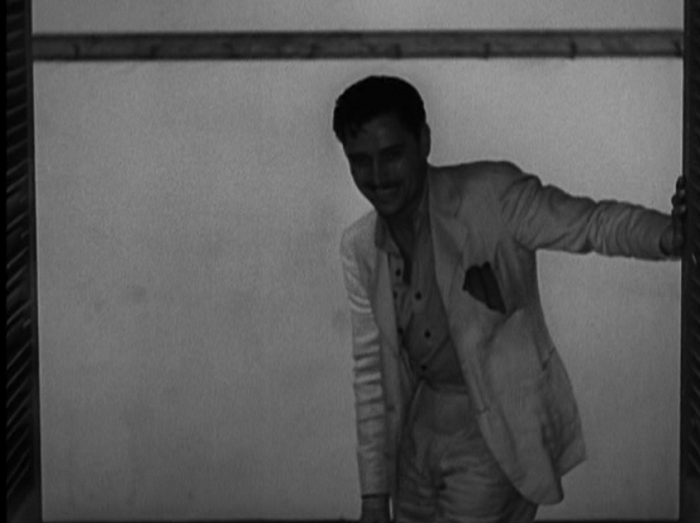 Say goodbye to Martin, everyone. He looks so cheery!

I know of the book because it’s one of the first “science life” books, a subgenre I was briefly in to before I realized most of the modern ones are terrible and went back to books about space pirates, which are also terrible but at least fun.

I did see there is a “remake” of sorts as part of a radio series with Orson Welles and Helen Hayes returning as Leora. You can get the audio here: http://archive.org/details/otr_campbellplayhouse

That’s awesome. Thanks for sharing, Tars!