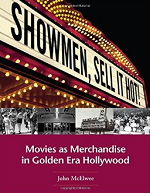 When it came out I interviewed John at NitrateVille, you might find this interesting:

I applaud your phrase “the usual regurgitated film history that views movies as these large static giants.” No kidding! Movies should move — and so should movie history. The making of the average movie is often as entertaining as the movie itself. But you wouldn’t think so after reading the leaden prose of some historians. John McElwee is the happy exception to this rule. This is an excellent book.