When [Robert Taylor’s] agents committed him to the 1965 film The Night Walker costarring his ex-wife [Barbara Stanwyck], he exploded, but could do nothing about the commitment. He told reporters, “Who could pass up the opportunity of working with such a wonderful talented woman?”

He could. The only truthful word in his statement was “talented,” and no one who has ever worked with her will deny that—unless it was her other peers, who nominated her for an Oscar four times but never gave her one. Those who worked with her had only praise because she was a perfectionist and a dedicated actress. […]

When I posted that I was thinking about reading this book on Twitter, one person chimed in to me, saying something to the effect, “you should read a biography written by someone who actually likes Stanwyck.” I thought that was silly. Who would write a biography of someone they hated? And, boy, was I wrong.

Barbara Stanwyck: The Untold Biography is, weirdly, a biography of the relationship between Robert Taylor and Barbara Stanwyck told from Taylor’s point of view. If it weren’t for a few mentions of a few selected Stanwyck films, you’d be forgiven for forgetting that it’s supposed to tell us about Stanwyck, not select a series of arch conclusions that make her out to be a high villain wholly appropriate for any given Disney film.

The point of the book is that Taylor, a sort of bargain basement Ray MIlland, is not gay. Nope, not at all, couldn’t possibly be, the author consulted a psychiatrist and doctor who don’t give their names but are totally qualified to comment. Taylor is a manly man who goes out hiking, camping, and raced his motorcycle just too darned fast. Need any more proof of his magnificent hetero libido? Here’s some choice quotes, directly from the man himself. Here he is talking about Lana Turner:

“I don’t think she knew how to talk without being sexy. When she said a simple thing like ‘good morning,’ I melted. She is the type of girl a guy would risk five years in jail for rape.” (p. 93)

Charming, right? And here he is describing working with then-17-year-old Elizabeth Taylor:

“For God’s sake, she was stacked! I didn’t realize it until she appeared on the set in a negligee. She was just a child, but I couldn’t help myself.

“It wouldn’t have been so bad,” he continued, “if they shot the scene with me sitting down, but I spent the entire day in that condition. Finally, I spoke to the cameraman and he aimed the lens from my waist up!” (p. 125)

The film is awash with that mid-80s he-man sexism that was in vogue. Think that these are isolated incidents? Are you ready to start vomiting freely?

Let’s talk about how the book portrays Barbara Stanwyck’s first marriage to Frank Fay. Fay was an abusive drunk, someone who beat her and even threw their toddler son into the pool once in a drunken rage. They were a combative pair, but most modern, well, people in general would be horrified by Fay’s abuse of Stanwyck.

Wayne, however, isn’t going to hold herself to that. She gets as close as she can to saying that Stanwyck deserved to be beaten, and then often turns to offer immense praise and admiration of Fay. It’s amazing. It’s a shitshow of justifications for terrible moral lapses. Here’s a few examples, for anyone curious:

No one envied Barbara’s marriage or resented the big mansion that was void of dinner parties and friends. No one in Hollywood was jealous of Barbara’s life beyond the studio gates. Fay was still beating her up and it was no secret, and he was still getting into fist fights. If Barbara he gave her one to the jaw, too. The joke was, “The only one Fay can beat up without getting knocked out cold is his wife!” (p. 46)

[Stanwyck] could not keep her marriage together. It should have ended long ago, but by hanging on she indirectly destroyed Fay’s career by refusing to move back to New York with him, lost a great deal of money—and gained a child she was too busy to love. […] [Fay] was, despite his drunken brawls and waning career, the stronger of the two; although she paid the bills, he was always the man of the house. (p. 50)

As for Fay, he gave up the bottle eventually and became a hit as Elwood P. Dowd in the smash Broadway hit Harvey. He said, “How could I help getting along with a rabbit when I was named after Saint Francis of Assisi, who was the brother of all the birds and beasts.”

On a coffee binge the rest of his life, Fay said he would talk about anything except one thing—his marriages! (p. 73)

This book is garbage. Like, unabashedly, drawing more from Christina Crawford and Harold Robbins than any sort of academic background. It’s kind of enjoyable in that way, a fun time in seeing the author’s own biases and manipulations dance across the page. Every time she ponders what Hollywood thinks of Stanwyck, it miraculously conforms to her own views, often backed up by anonymous, possibly non-existent sources. She wants you so desperately to loathe and hate Stanwyck that she curdles Taylor by association and makes herself look simply monstrous.

It’s also enjoyable as kind of a time capsule besides just the author’s feelings. For example, this was written during the interminable wait between seasons of Stanwyck’s final television show, “The Colbys”. This instantly dates it, and looks like a crap cash-in… noooooooo.

But that dating also reveals how the enshrining of Stanwyck’s filmography has fluctuated over the years. While the biography Barbara Stanwyck: The Miracle Woman is clearly earmarking every one of Stanwyck’s entries into the Criterion Collection and sniffing at a majority of the rest, The Untold Biography has more hangups. First off, it’s patently obvious that Wayne couldn’t or wouldn’t get a hold of many of Stanwyck’s works, leaving a few funny gaps. Then there’s how The Lady Eve is barely touched upon and Sorry, Wrong Number gets lavished as one of her great roles.

(Side note: while I gave The Miracle Woman shit for its one-off, dismissive mention of Mae Clarke, at least that author managed to spell her name correctly.)

My favorite part has to be the author’s befuddled, angry reaction to The Bitter Tea of General Yen:

This picture was Stanwyck’s most unusual and Hollywood wondered why she bothered to make it. So did her fans. […] This was Stanwyck’s only “art” film and Capra was pushing for an Academy Award. He claims it lost money because it was banned in England, yet the same ban did not affect The Miracle Woman, and, if anything, boosted sales. (p 43)

The Untold Story is a relic of its times, a tell-all that barely says much besides as an antique of no good very bad sensibilities. I mean, I don’t actively regret reading it like I do The Miracle Woman, but it’s not for any reason beyond watching (reading?) a train wreck unfold. But, man, I just don’t think I hate anything in the world as much as Jane Ellen Wayne hates Barbara Stanwyck

Note: I believe the book I read was the British version of Stanwyck, but I’m not 100% on that. Like, 99%, but just covering my butt here. 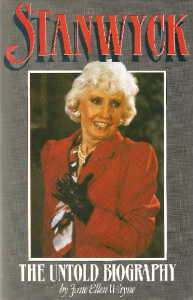 Vicky Wilson’s book about Stanwyck is the gold standard. Part II is in the works now….. Another great review, Danny. Thank you.

Thank you for a most enjoyable review. I’ve been desperately seeking a respite from the current political insanity and this was it. I only wish that she and Kitty Kelley could write tell-all books about each other; now, THAT would be a publishing event that might get people reading again!

Holy crap! First of all, I can’t get over the stuff that Robert Taylor said about (a very young) Elizabeth Taylor … that’s just WRONG! Dude, that’s fucking horrible! While I was reading that, I had a hard time picturing Robert Taylor uttering those words … I guess based on his MGM polished image, it just doesn’t seem like something he’d say (or do). Wow. That was a real eye-opener.

After reading your review, it’s very obvious that the author didn’t care for Stanwyck very much. But then why waste your time (years even?!) writing a book about a subject you detested? I mean, she’s outwardly condoning Frank Fay’s physical abuse!

Damn it your book reviews are amazing.

There’s always been and will be a market for trashy, tell- all “biographies” of famous people.
Usually with titles like “X, The Untold Story” or “Y, Behind The Facade.” Check out your local charity shop.

Taylor had problems throughout his career of being seen as too darn handsome to be seen as a Real Man, whatever that might be. Therefore the lewd remarks, nothing out of the ordinary for Hollywood standards in them days. (Sinatra had the same problem early on in his career, and responded likewise.)

But saying that she actually ruined Fay’s career by not punching him back, wow, that’s hatred an on epic scale. Babs, how could you be so utterly selfish!

I may or may not have been the one who made that comment to you on Twitter, haha! As horrible as Wayne is as a biographer, I have to give her a little bit of credit for not even trying to hide her bias. It’s clear to one and all that she detests Stanwyck. Most of Taylor’s biographers have a more veiled contempt for Stanwyck.

It’s funny, in one of her Stanwyck bios (yes, she released more than one!), in her bio, it states that she was employed by NBC at one time. But it doesn’t say how she was employed…for all her writing and journalistic talent, she could have just been an elevator operator or something.

This is quite a review or rather, quite a book. I commend you for having the stomach to stick it out. You’d never know from the cultivated persona that Taylor was such a ‘mixed-up’ guy. I feel badly for Stanwyck that she had to put up with him given what I know about her rough upbringing. But that explains a lot too doesn’t it? Terrible to have it written up that way by an outsider and yes, the book sounds obviously dated.

I remember skimming through this at the library once. Not even for free was that coming into my home.

Thank you for the review. I am interested in checking out books about the pre-code stars so reviews like this one are helpful. 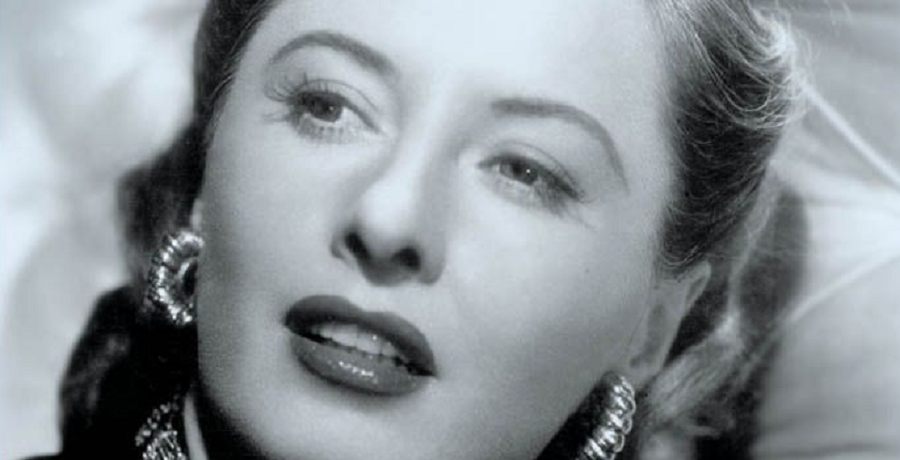 When I mentioned I was writing a book about Barbara Stanwyck to people around my age (mid-twenties to mid-thirties), they usually didn’t quite know who she was, unfortunately. If they asked me what movies she Read more…