The Gay Divorcee (1934) Review, with Ginger Rogers and Fred Astaire 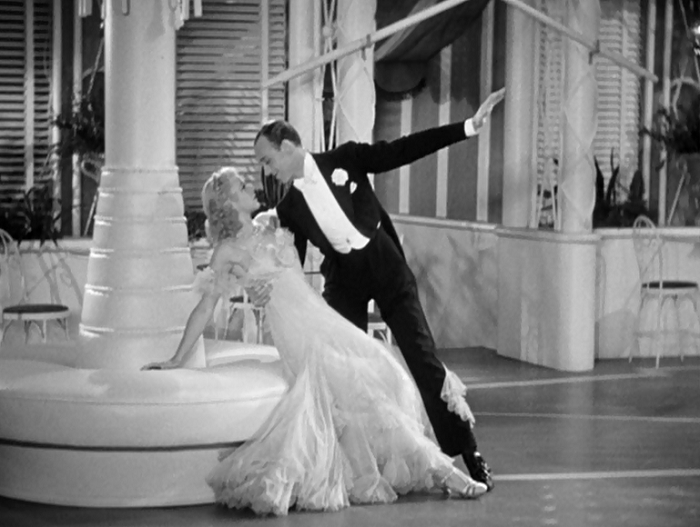 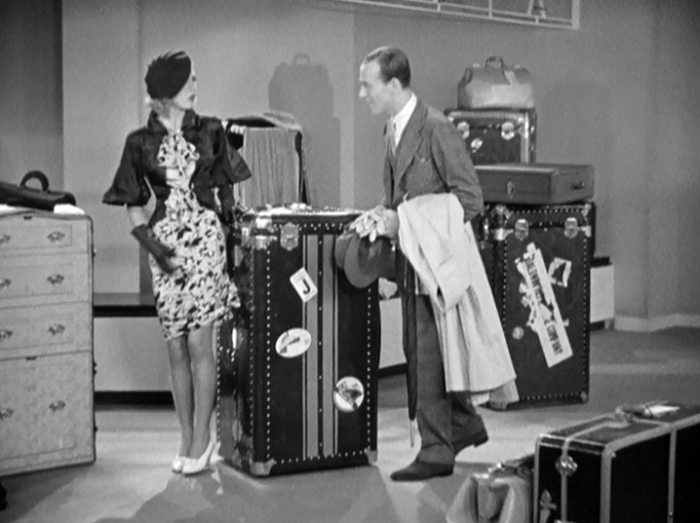 “Pardon me, m’am, have you been leered at lately?” 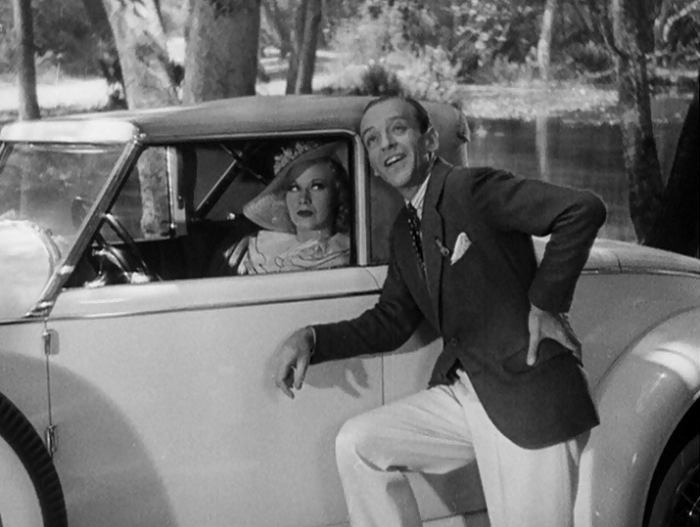 “Hrm, time to be stalked again.” 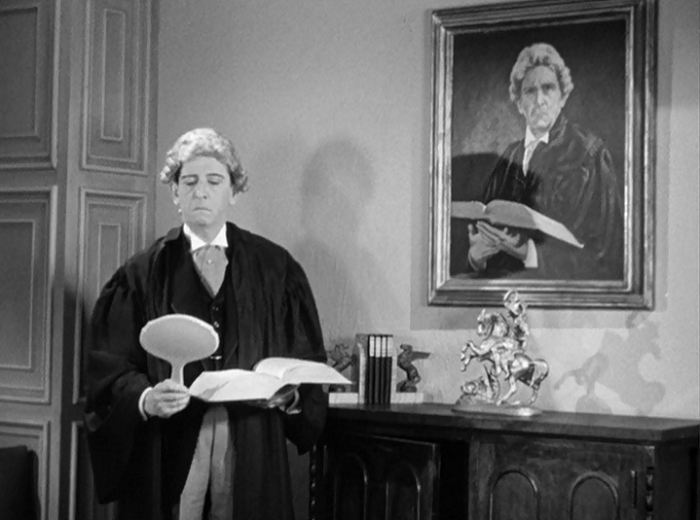 I do this in my spare time, too. 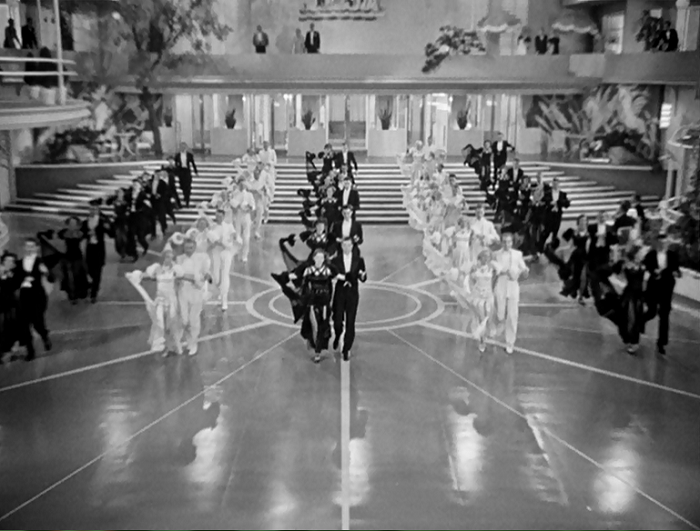 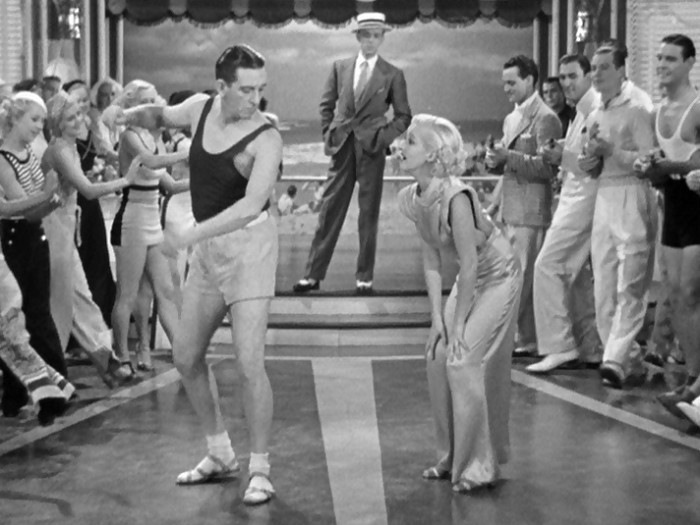 It’s interesting that in this film’s world that musical numbers just kind of happen, and people can wander into them and be baffled, like Fred here. 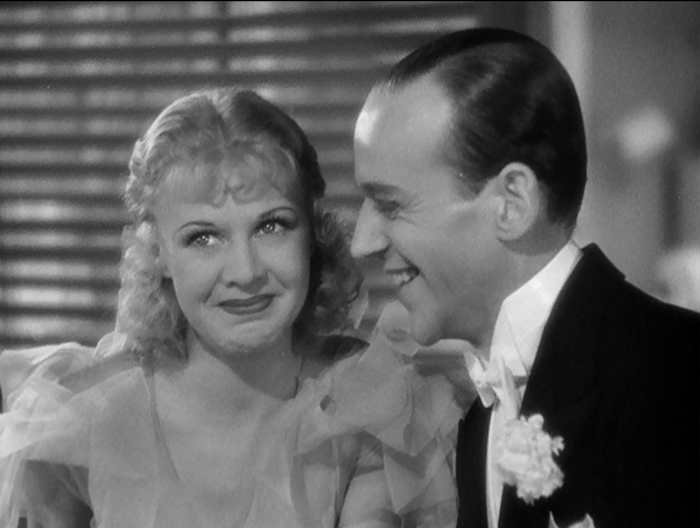 ASTAIRE AND ROGERS WILL RETURN IN OCTOPUSSY. Er, or Roberta.

Danny, it has its flaws, but remains one of my favorite Astaire-Rogers films. I like the lead characters better than you, but agree that the supporting ones steal the film. Erik Rhodes’ correspondent is a delight and Ive always found Blore to be wryly amusing.

Yeah, the supporting cast really saves it for me. I don’t dislike it by any means, but I can see the grasping talons of censorship swooping in, and it really dilutes the experience for me. I think if it were made six months earlier, maybe something could have come from The Continental other than an unending dance sequence and maybe Rogers could have had more of a say in her own pursuit. As it is, I wouldn’t avoid it again, but I didn’t enjoy it as much as the unhinged Flying Down to Rio.

I like what you said about the supporting characters running away with the film. So true!

Like you, I find Ginger Rogers rather unlikeable, but I love the overall look of the movie. It’s so unattainably, unbelievably glamorous.

I felt bad during the CMBA blogathon since there were so many people who had felt so touched by this movie, while I think it has its share of problems. But, yes, the set design and supporting cast are wonderful. I just think Fred and Ginger were better elsewhere.

I agree ‘The Continental’ goes on for far too long, but absolutely love ‘Night and Day’. In the UK this film was released as ‘The Gay Divorce’, in line with the original Astaire stage show, and it is still shown on TV here under that title – I must say I think it is a much better title than ‘The Gay Divorcee’, which sounds watered down. OK, maybe not one of the greatest Astaire-Rogers films, but they are always magic together!

I will agree they have great chemistry. I had no idea that the British title was any different, and I find it silly that one changed letter really endorses divorce. But, hey, that’s censorship for you.

It’s a fun movie, but for me “Swingtime”, was their best film

I thought it was pre code! Some girls have too short skirts and sometimes their panties are seen during their dance 🙂 And the girl singing to Egbert about ‘doing something’ surely had sexual contents 🙂

Yeah I tend to think this is one of those bridge films that was probably planned and filmed when things were still pre code but released in Oct. 1934 after the code. It’s kind of funny but I showed my wife all the Astaire/Rogers movies and I’m not sure she was blown away by any of them really. At one point during The Continental she just said “Oh get over it.” I think they learned their lesson with The Piccolino in Top Hat, which was at least a tolerable run time.

That said this is still an easy “like” for the numbers and the supporting cast.

One thing I will say is that am I the only one who finds Mark Sandrich’s direction in a lot of the A & R movies sorta uninspired? It’s all very much just “point the camera at them dancing or singing and get out of the way.” It’s odd because he was likely promoted to these films based on stuff like Melody Cruise, Hips, Hips, Hooray, and Cockeyed Cavaliers which are full of weird and inventive directorial touches.