“Half the men in Paris are crazy about her– and the other half are trying to forget her.”

The artist’s model. Throughout the first part of the early 20th century, they held a special fascination in the minds of Americans. By profession, they were scandalous– carnal beasts whose physicality and willingness to strip were neon signs of loose morals. They were fodder for fiction, photos, and anything else that may come in the mail via brown paper bag.

Take Inspiration for instance. No, not 1931’s Inspiration, but 1915’s Inspiration starring Audrey Munson, the first woman to appear nude in a film (in a non-pornagraphic way). Munson herself was a famous artist’s model, and parlayed that into a number of films– also about artist’s models, as to excuse the nudity– that titillated the audience under the guise of artistic purity. 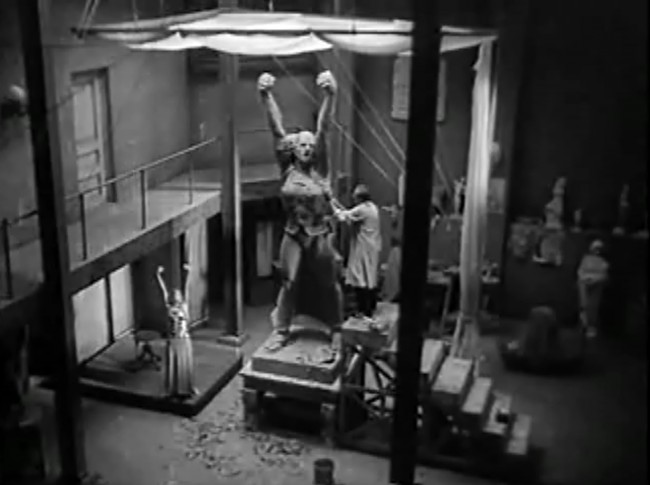 Yeah, that looks exactly like Garbo! … the tiny woman on the left does, I mean.

Inspiration isn’t a remake of Inspiration, but does focus on that same idea. The artist’s model, a woman free of spirit and, wink wink nudge nudge, body, must suffer the consequences of some poor sap falling in love with her. Inspiration— okay, just assume I’m talking about the 1931 version from here on out– is a bit more cavalier. It’s clear that the artist’s model, Yvonne (Garbo), has inspired many men, not just on the canvas but in the bedroom.

She’s currently the consort to one rich man while artistically modeling for a number of enthusiastic supporters. That’s when she spots the boy with the pretty eyes at a party, Andre (Montgomery). They end up talking and spending a lengthy carriage ride together before a night after soon follows. 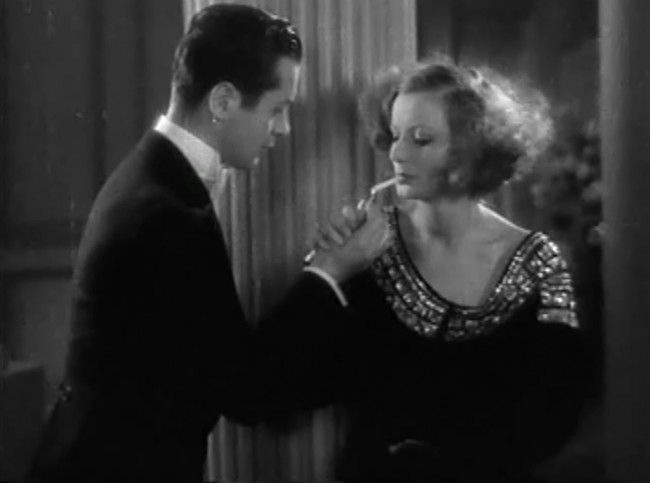 But Andre soon finds out her extensive past and leaves in a huff– he’s hoping to get a government job, which even in France apparently means no women of ill-repute. So there’s our conflict– Andre is too uptight for la vie boheme, Yvonne has a lot of past and a desperate need to be loved. It plays out in a cycle, with Andre constantly returning and leaving as he unravels more of Yvonne’s past, while Yvonne starves and clings to her obsession with the boy.

This could be something with a measure of dramatic power, but the script and direction make it musty and passionless. Andre needed some measure of cruelty to him to make the character work, but Montgomery can only make him huffy. Robert Montgomery, so often the smirking, sparkling foil to Norma Shearer, looks timid and nervous around the great Garbo. His character is a jerk, and not an interesting one.

But, hey, sometimes women fall for charisma free jerks. Garbo’s Yvonne is the best part of the film, and Garbo instills all the torture and misery of mostly-unrequited love into one beautiful woman. 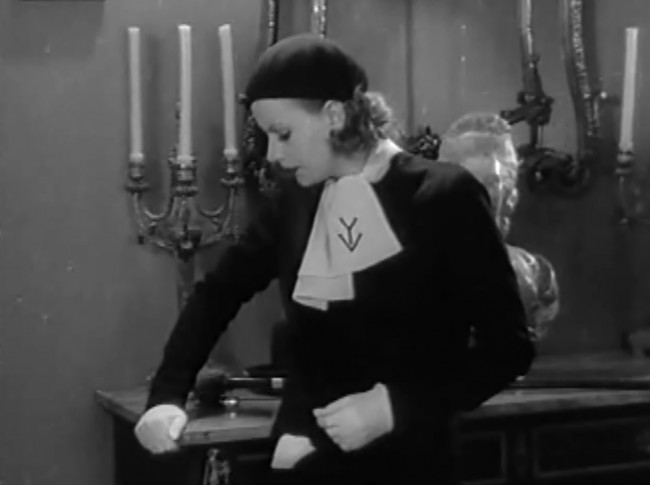 Keep it together, Greta. It can only get better.

It’s just a shame about the rest of the production. The dialogue is achingly dumb, and Brown, though much, much freer with movement and lighting here than he was in Romance, seems to be focused on making a few pet sequences stand out rather than giving the film an overall feeling of quality. There’s a lot of focus on a long trudge up a staircase (see the Trivia section for more on that), but rather than give us time to meet and adjust to the character’s interplay, it seems padded, with awkward moments of silence and it makes the supposedly tall staircase seem effortlessly short– all the weirder when Yvonne sits on the last step, exhausted. It’s a three story walk up! Do some calisthenics, lady.

Some of Brown’s attention-grabbing shots work much better, and I’d be remiss to leave off the best. A brief first person sequence introduces us to Yvonne’s jilted lover at the beginning of the film, as he walks through the flat he pays for and angrily throws his top hat on to her bed. Not leaving the first person gives the audience a similar sense of mastery over the surroundings, and his hat on the bed says volumes about their relationship. 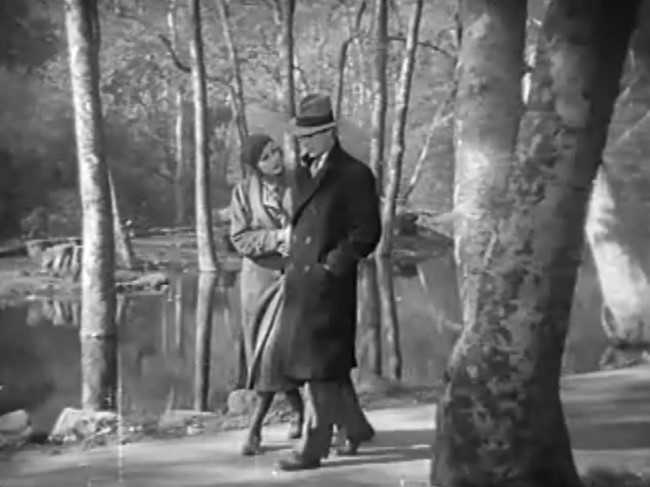 I hate to say it, but Paris is very famous for not looking like this.

Unfortunately, touches like this are few and far between in Inspiration, which never really makes up its mind what it’s about. The dangers of falling in love with loose men? Or the dangers of falling in love with moral men? Hell, maybe it’s just men in general are trouble. One of them definitely wrote the screenplay. Men hand out money, women weep, the world goes on somehow.

Confession time: I actually guffawed loudly at the abruptness of the ending. It’s distinctly unpoetic, almost like someone forgot to attach the last ten minutes to the picture. They didn’t; I guess I should just be happy the movie is 80 minutes rather than 90.

“That’s silly,” [Garbo] said after trying to say a particularly awkward sentence. “I never heard people talk like that.”

Brown was not about to tamper with the line, and [writer Gene] Markey, unlike Frances Marion, was not on the set to help. Brown asked Garbo to say the line as written. Garbo was not happy about it. She walked over to Marjorie Rambeau, who was holding the Pekingese dog who portrayed Boo Boo in the film. “Excuse me, Miss Rambeau,” said Garbo, “but your dog must have some fresh air.” Garbo took the dog from the startled actress and walked off the set. A few minutes passed. Brown sent Charles Dorian to fetch Garbo. “Not yet,” said Garbo, avoiding the stares of various passerby who saw her standing in an evening gown outside a soundstage holding a perplexed Pekingese. “Not until the dog is all right.” A few more minutes passed. Clarence Brown emerged into the Culver City sunlight.

“Greta, the script will be just as you want it,” he said softly.

“The little doggy is okay now,” said Garbo, tucking the creature under her arm and following Brown inside. 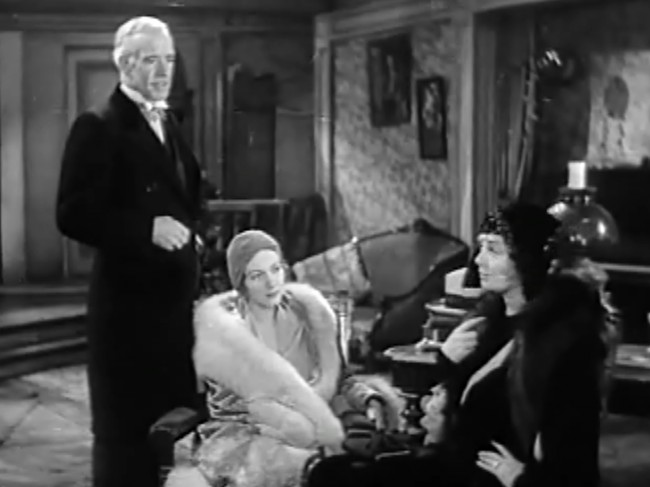 Another film saved by Boo the Wonder Dog! … I don’t think he’s in this one, but keep looking.

The chief failing in this film, aside from the fact that its Parisian atmosphere never seems far removed from the Pacific Coast, is that of having Robert Montgomery cast as the young French consular service student, with whom Yvonne, as the heroine played here by Miss Garbo is known, falls in love.

Yvonne may be a creature of impulse, but the idea of her being madly smitten by this André Martel (Mr. Montgomery) is surprising, but never believable. This young lover needed to be played by an actor of more experience, to lend credulity to the romance. Virtually all Mr. Montgomery succeeds in impressing upon the audience is his embarrassment.

How did you happen to see this one, Danny?

There’s currently a 1-hour video on pbs.org with Julian Fellowes and several of the “Downton Abbey” cast members. Per Clarence Brown’s kerfuffle with Garbo over one of the lines: Fellowes explains that he always reads his scripts aloud, to make sure every line is something the actors can actually say. He also says that throughout his writing career, when an actor has objected to saying one of his lines, the actor is almost always right, and he revises the line. Garbo knew instinctively that the line wouldn’t work. Good for her for standing up for it — and for using the dog as a gentle excuse to help Brown save face when he finally agreed.

I pray for that every day, Veebs. Every. Day.

Good review. As always GG is luminous & gorgeous. Andre was so irritating & Montgomery the most wooden actor ever opposite Garbo. He’s looking at his fingernails while she’s pouring out her heart on one scene! Poor Greta had way too many vehicles unworthy of her. As with most of her films, Inspiration is worth watching because of Garbo. (And Boo Boo) LOL

Montgomery is supposed to be playing some level of a heel, but he just isn’t and can’t. Ricardo Cortez might have been able to pull off the part or even Warren William, but Montgomery was at MGM and he’s who they went with, for better or (apparently) worse.