Lighting Bill: You Read That Right

“Hey! You see the lightning gun hand that fella had?”

“He got a lightning gun hand all right.”

Lighting Bill definitely radiates with the aura of carelessness. The title on the title card? Misspelled. It’s supposed to be Lightning Bill. You want flubbed lines? Painful sound design? Poor framing? Doesn’t even make it to the 50 minute mark? A plot that’s held together by sheer magic? Sure, all there.

Said plot: someone gets a lot of money. A desperado gets wind of it, but the guy cleverly hides it in a pillow before he’s killed. Months later, the guy’s brother and daughter own the ranch, and the desperado is trying to steal the property from them so he can find the money. Bill, credited here as Buffalo Bill Jr., has “lighting” reflexes and, with pal Barney, swoops in to save the day. 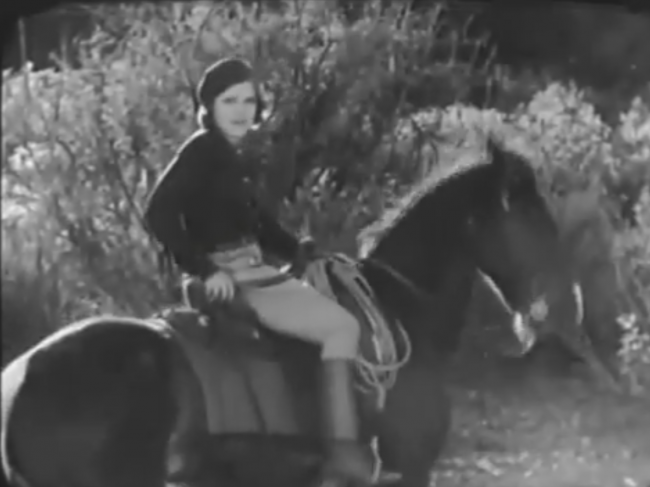 Barney is Bill’s sidekick. He loves to eat and make jokes. Here is a Barney joke:

“Say, Bill. Where do you suppose the flies go to in the wintertime?”

“I don’t know where the flies go to in the wintertime.”

“Well. I wish that they’d go there in the summer time!”

Man, I could totally write a lot more about this movie. I’m sure I could if I really tried. I don’t really feel like I have to though.

I give you props for reviewing this western that’s on the on the low end of the B-movie spectrum! Sadly, Jay Wilsey fared much better in silent-film days. He does look good on a horse, and even made a serial for Universal in 1928 or 1929, but he was one of the screen cowboys, even by1930, that just couldn’t find his niche in leading roles–other than these.