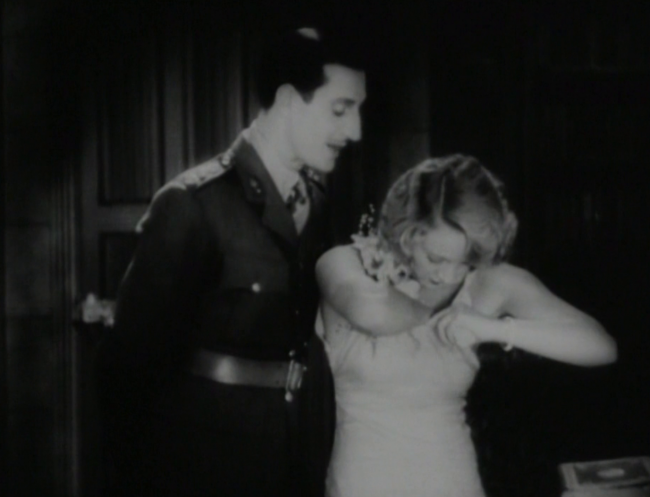 “Whatever you do, don’t write. I hate letters intensely.”

The Flirting Widow is one of those old fashioned movies that makes you wonder if movies really were ever just this old fashioned. Dorothy Mackaill, a 20s flapper who faltered when talkies came in, stars as Celia, a mod daughter who keeps a rich household running.

Unfortunately for her, her father is the old fashioned sort, so much so that he believes his daughters should marry in order of their birth. Celia, being the oldest, is holding up her sisters. She decides to invent a fiance named John Smith (who she fondly and instantly nicknames “Wobble”), and loudly declares that, unfortunately, “John” has just left for Arabia. This frees her sisters to marry, so she sends him love letters while her overjoyed sisters, sauced aunt, would-be lover, and grumpy father watch.

Through a ludicrous mix-up (is there any other kind?), her letters end up being delivered to a real John Smith who is stationed in Arabia. He’s the lonely sort, despite being played by Basil Rathbone, and takes leave to return to England and track down the woman who writes such kind things to ‘Wobble’. The day he arrives, a fake death notice for Smith that Celia had placed in the paper to escape the situation runs and complicates things further. Smith pretends to be another officer there to console her, sending her into all manners of confusion, and, by the time Celia exclaims, “Oh, this is absurd!”, well, yeah.

It’s not difficult to follow, but it’s creaky. Rathbone and Mackaill have a nice, playful chemistry, almost completely lost in a sea of lengthy speeches and one-sided phone call conversations. Celia’s final plot twist and John’s last confession don’t ring true, while nearly all of the side characters are cartoons. Direction is stilted. Loud background music kicks in for the first ten minutes of the movie and then impotently shirks away.

It’s worth remembering and discussing films of this time as the product of a factory. The Flirting Widow, while having some popular working pieces, is a defective model, and just another discarded attempt as movies stumbled their way through the talkie revolution. This one was just grist for the mill.