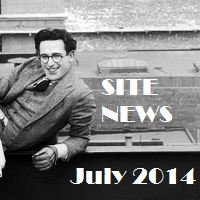 Hey guys! Lots of news for this month.

First, and the most obvious one you’ll notice today, is that I’m adding Get TV to the schedules I put up every month. Get TV is an ad-supported free television network that broadcasts across the U.S. It usually only picks a number of movies a month and then shuffles them, meaning if you tune in the same time every day you’ll find something different, but if you miss something, you have plenty of opportunities to catch it, too. You can read more about Get TV and their desire to make sure you see Twentieth Century this month over at Cinematically Insane.

A less ostentatious addition to the site, but one I’ve certainly been chugging away on the last few months, has been a new tab in the menu labeled ‘Studios‘. Here you will find overviews of all of the major film studios of the pre-Code era, their histories, output availability, and famous titles. It’s still a little rough looking (need to do some QA there), but I wanted to create a space to help people who know that movies were made but wanted a bit more history behind their creation. Check it out, and leave any feedback you’ve got here. I’ll appreciate it!

Friends who follow the site on Twitter will have seen some exciting news: TCM is showing 24 hours of pre-Code every Friday in September! That’s on top of their usual random insertions of old pre-Codes on the channel as well, which makes it sound like that month will be one to fill the DVR to the bursting point. I’ll have a full list and links to my reviews in my August schedule update, but if you’re eager to see what they’ll be showing, head over to Immortal Ephemera which has a complete breakdown.

Attentive readers may have noticed at the beginning of the year that I was mostly trying to hit a lot of 1934 movies and I’ve certainly strayed from it. In light of the announcement above, I’ll probably spend most of August and September hitting the movies you may be seeing on TCM that I haven’t already covered on the site, stuff like Union Depot and other rarities. I’ll get back to 1934 as soon as I can– heaven knows those DVDs are just staring me in the face.

Speaking of, though, I’m turning 31 the first week of July and am taking my annual “It’s my birthday and I should probably give myself a bit of a break” vacation. However, I have an important sort of announcement on July 4th that I hope doesn’t get too lost in the shuffle of the holiday weekend. It’s along the lines of a blogathon… but it’s not. I guess you’ll just have to tune in and find out what I’m prattling on about, won’t you? 🙂

Please note: All times are Eastern. This schedule is subject to change. See the full listings here.