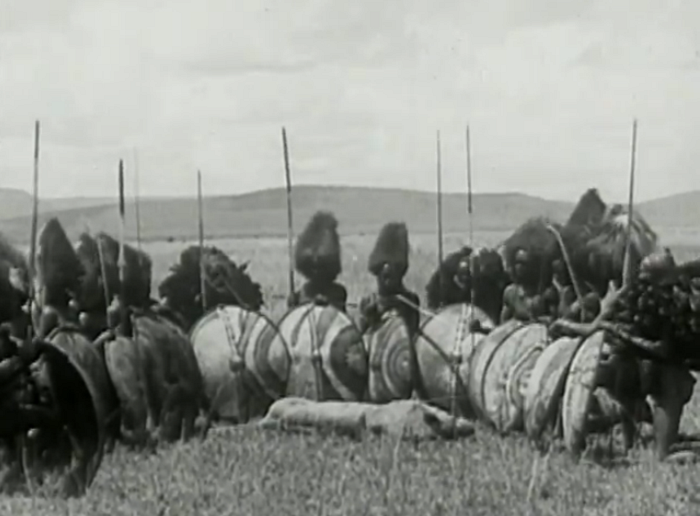 There’s a bit in this one “Mystery Science Theater 3000” episode that works perfectly to describe the modern experience of watching Africa Speaks. As the film The Jungle Goddess unspools, it becomes painfully obvious how poorly the stock footage has been edited together with actors on a sound stage. “Real Africa!” Joel points out. The scene changes, “Fake Africa!” Men wrangling a zebra. “Real Africa!” Black men dressed up in comically huge bones. “Fake Africa!”

Replace the tribals with a pair of chubby white men in pith helmets and we’re getting there! Africa Speaks is that weird hyrbid of 1930’s documentary like The Blonde Captive and in the tradition of Nanook of the North where reality was often recreated or supplemented to enhance the cinematic experience. In other words, for the sake of excitement, they just sometimes made things up.

And that’s important to understand before sitting down: this is a documentary with obviously different ethical viewpoints than those we now see in most documentaries. Whether modern documentaries try to be more objective or have just gotten better at hiding their subjectivity is a debate for a different day. 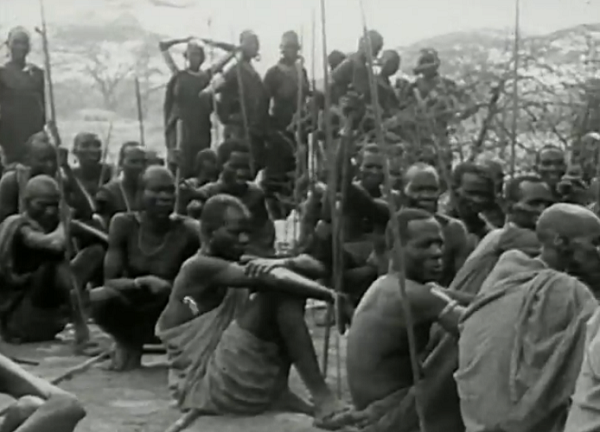 Africa Speaks is one part travelogue, one part provocation, and one part obviously filmed back in Los Angeles. You can tell the made up portions by a simple rule of thumb: are the characters pretending the camera that is taping them isn’t there? Whenever you see the explorers Harald Austin and Paul Hoefler on screen, it’s a pretty safe bet that you’re watching the connective tissue added in later.

These two bumble about beneath the bombastic narration of Lowell Thomas (also from The Blonde Captive), who spends the film unable to stop chuckling to himself. Like in that other documentary, he gets morally outraged at the lineup of elephant tusks that sit on the dock, indicating a genocide of elephants, but then is careful to point how awesome pygmies are compared to the common continental negroes.

Oh, yes. If you thought the condescension towards the aborigines in Blonde Captive were bad (and, if you wisely didn’t watch it, it was bad), this film does its best to top it. Besides the usual amazement and nastiness directed at the natives of ‘the dark continent’, they’re often portrayed to be imbecilic. Worse, this comes mostly from the staged stuff. It’s not enough to see weird tribal customs, but the audience must also get its share of minstrelry for true satisfaction. 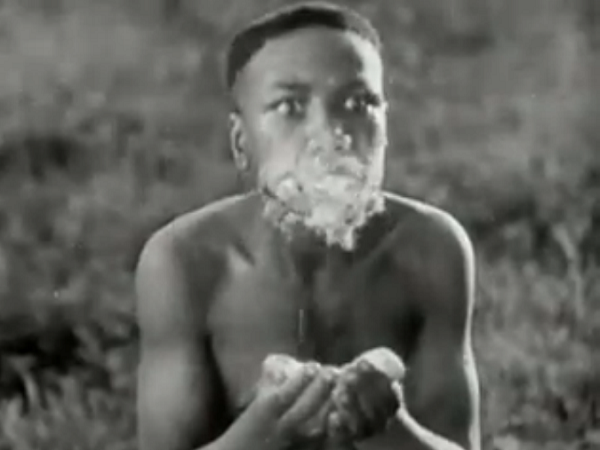 This is epitomized in one scene where the explorers trade a bag of salt to a native, and the native begins to gobble it up immediately. Not only would no one in their right mind do this (natives collected salt for seasoning and preservation, not to eat big handfuls), but it’s added in simple to reinforce the audience’s notions of the Africans as buffoons. Shameful.

The natives are only about half of the equation in Africa Speaks, as we do get a bevy of early wildlife footage. We learn a few tidbits of trivia among the many lingering shots: zebras are born actors, giraffes are ‘the original rubbernecks’ (you’re hilarious, Lowell), and flamingos taste bad. I swear I never knew I wanted to know that.

There are three standout scenes here. One is a herd of jumping antelope, whose bounce is infectiously cool looking. Next are swarms of locusts that descend upon cattle and shrubbery. Though the muddy footage makes them indistinguishable from one another, the sheer numbers are something to behold. 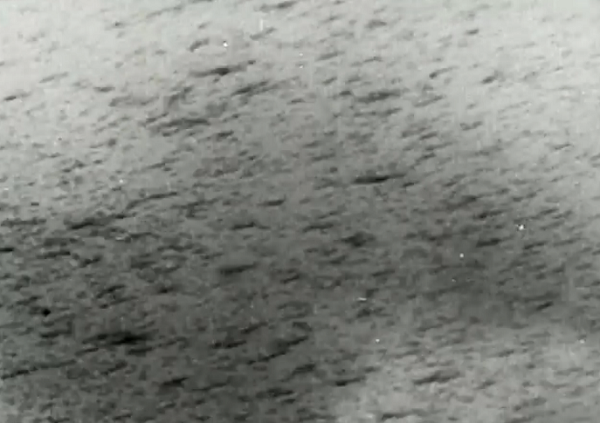 The last of these are the many shots of the lions out on the grassland. What’s interesting about these and a few other of the film’s subjects is that the documentarians were still getting a handle on how to effectively portray animals in the wild. Some shots involve going up and sticking the camera right up next to some spooked cubs, other moments involve standing next to the lions and starring while the lions patiently stare back.

What interested me here was watching the lions pant, obviously suffering from the oppressive jungle heat. Most nature documentaries today attempt to frame animals as uncontrollable yet noble creatures, above reproach. The lions in Africa Speaks are just trying to get by for another day. We gawk in response.

For those of a sensitive constitution, what I mentioned about ethics above doesn’t just extend to being politically incorrect. Several lions do lose their lives in the course of the film, one from a ritual hunt and another from our two brave explorers taking a pistol to one that is charging. The fakiness here is again unsettling. 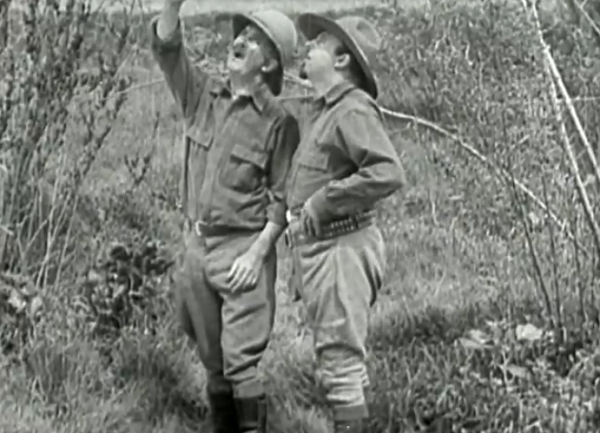 Did they really kill a lion for show? What about the native guide we see a lion brutally attack? Is this movie, that holds itself so mightily above the natives it portrays, hypocritically feeding into the audience’s basest desires at the same time?

Putting it in its historical context, it’s easy to understand why the film was a hit. Africa Speaks is more than just images of a world away from its audience, as it’s the first to bring the sounds back as well. The fact that it was draped in then-current ethnocentrism isn’t surprising, nor is its aims for titillation surprising.

But nowadays its tricks are so obvious and the coding so blatant that it’s depressing. Society, god willing, is eons beyond this by now; unless you’re doing a sociological study yourself, there’s no reason to dwell. 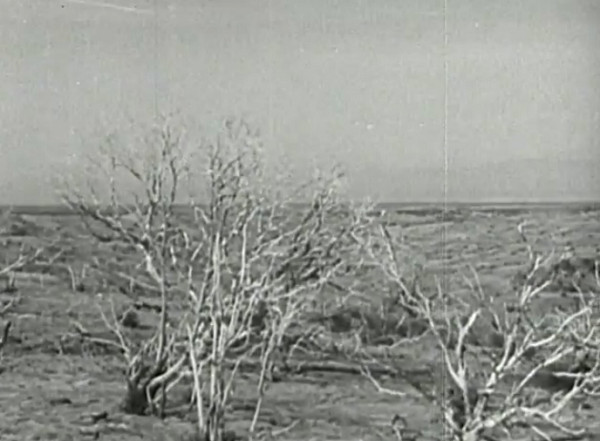 This is the scene post-locusts, which I have no idea is real or faked. So, good on you, movie, for having the rare scene where things are difficult to determine. 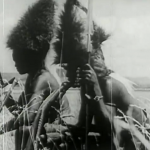 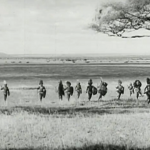 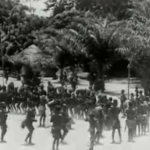 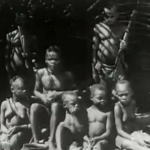 This “Africa Speaks” is the most thrilling of travel pictures that have come to the screen. 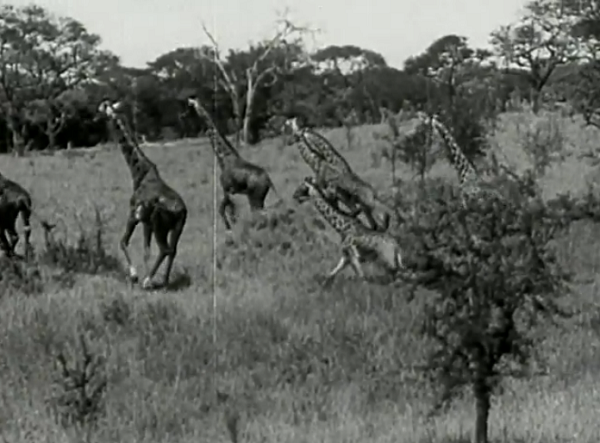 Definitely one of those films which reminds me of just how goofy giraffes look, especially when they’re running. 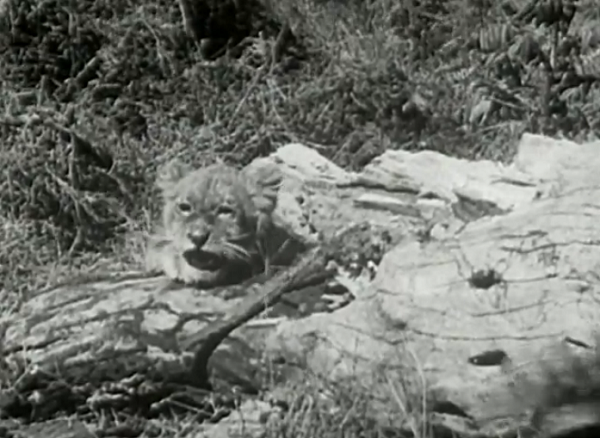 So was eating a bunch of salt the the 1930’s version of the cinnamon challenge?

First time visitor, I saw that this blog had recently joined The LAMB and I wanted to stop by and say welcome aboard. When you get a chance swing by our humble film blog and say hi.

I’ll give it a shot (the visiting your blog, not downing salt). Thanks for dropping by!

Oh-ho! And so this is where we get the title to the Abbott & Costello comedy “Africa Screams.” Considering that the A&C picture comes 19 years after this one, I guess Africa Speaks must indeed have been a big hit.

There was definitely a period of Africa-themed comedies that came from this (Wheeler and Woolsey did “So This is Africa” a couple of later). The movie’s success also spawned India Speaks, which I mentioned above, and, possibly related, Mussolini Speaks, which starred Mussolini and portrayed him as a pretty swell guy. I haven’t been able to find the latter anywhere, but I think pro-Mussolini propaganda that got a wide release in America is a pretty interesting prospect.

Anyway, moral of the story: if you’re in 1930, add the word ‘Speaks’ after your title and everyone will be wowed.

Never heard of this one, so good show. NOW we can finally understand why that Abbot and Costello pic was called ‘Africa Screams’ – it was a take-off on ‘speaks’ which if was as popular as you say, was temporarily in the zeitgeist canon.

Yeah, I meant to note the connection in the trivia section if I didn’t. I watched Africa Screams earlier this week out of curiosity and to see if there were any connections, and all it did was remind me that I hate Abbot and Costello movies…

I wonder if there was supposed to be any synergy between “Africa Speaks” and “Garbo Talks,” which was from the same year.

I’d like to think everyone in 1930 was just a big fan of noise, but both are possible.